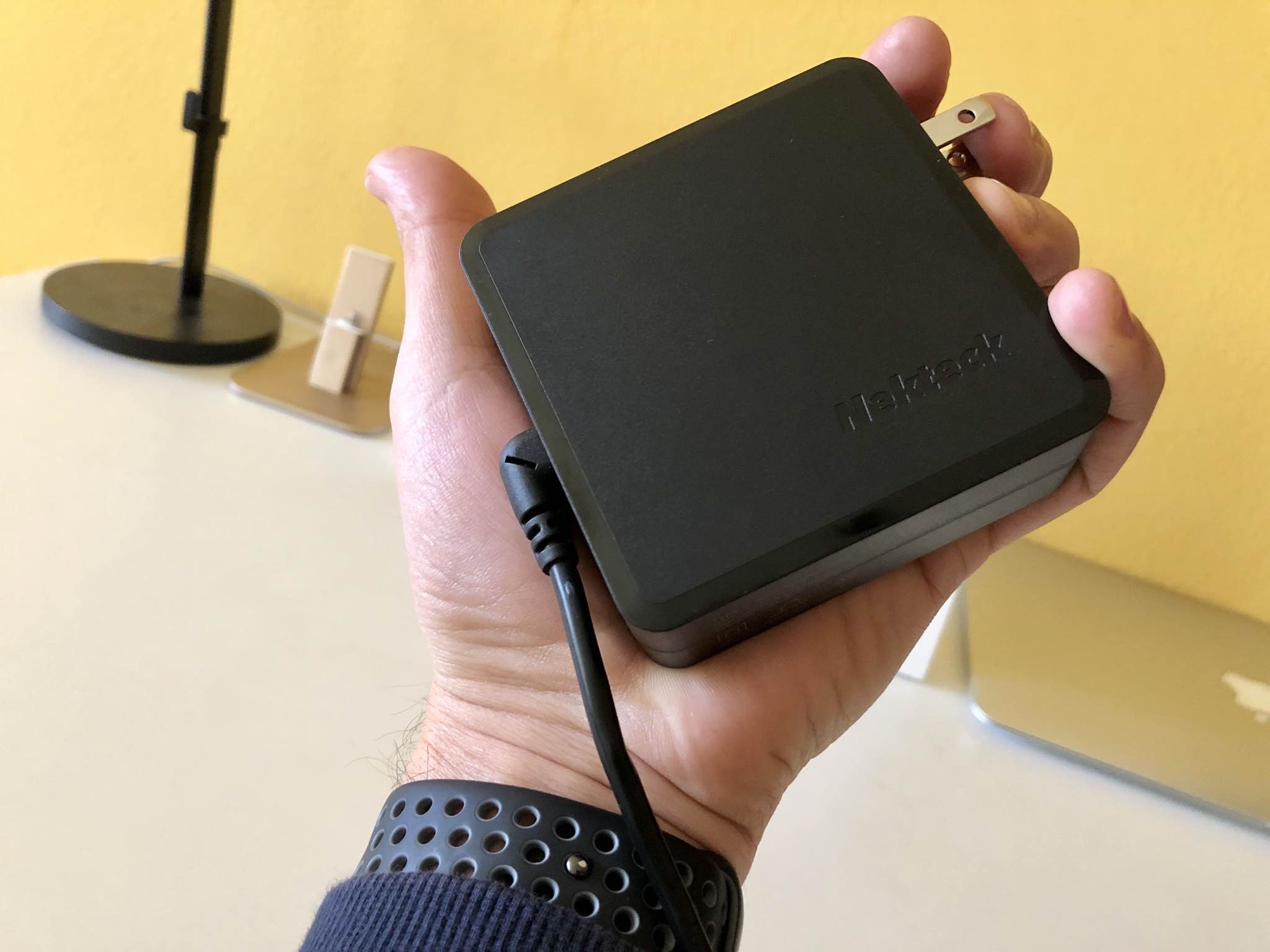 Do you need a portable power brick that provides fast charging speeds for all your USB-C devices, supports Power Delivery (PD) for overcharge protection and is priced affordably? If so, then look no further than Nekteck’s handy 90W USB-C charger, priced at just $29.99.

Picking up a powerful charger for all your portable devices used to be a complicated affair due to the lack of a universally accepted standard for efficient, safe charging.

USB Power Deliver certification has solved these woes elegantly because not only does it boost power levels from existing USB standards up to 100W but permits USB-C devices to negotiate for only the power they require, and get more power when required for a given application.

The Nekteck power brick is a fully Power Delivery-compliant charger providing up to 90 watts of power, enabling the top charging speed for all your USB-C devices, from low-powered headphones to power-hungry accessories such as USB-C storage arrays. 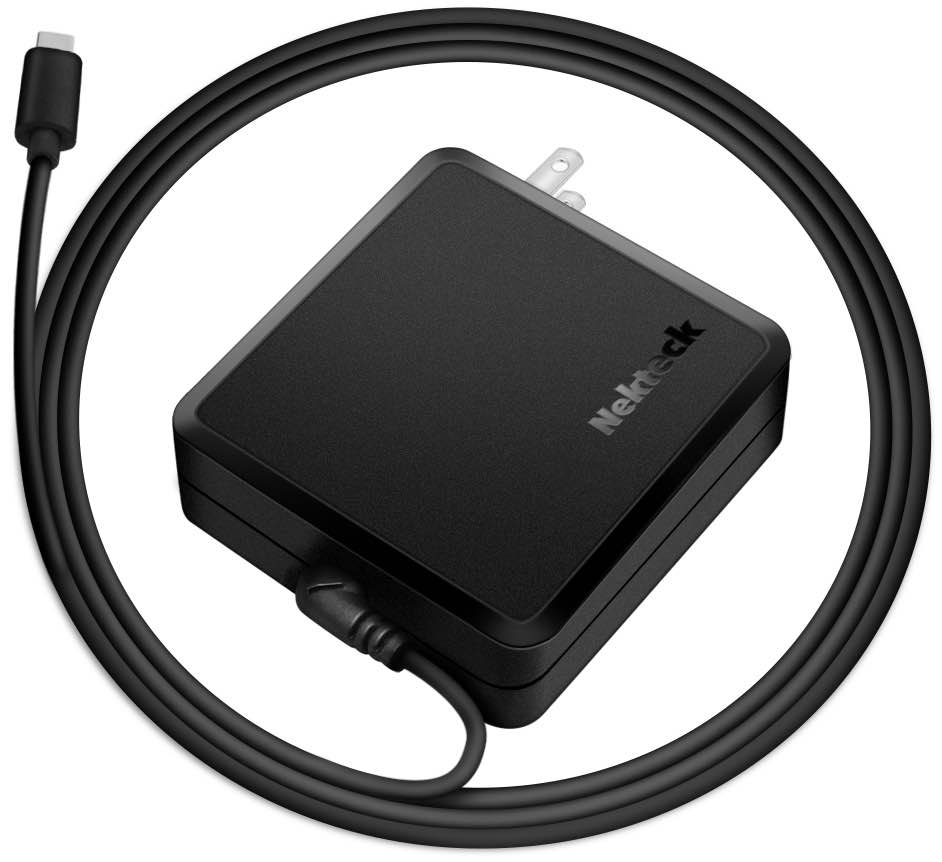 Clad in matte black plastic with the glossy accents around the corners, this power brick has solid build quality. As a matter of fact, I’ve had no issues using it anywhere I go or tossing it in my accessories pouch that I carry with me when on the go.

With its compact design, a foldable plug and 100-240V input, this is also an ideal USB-C charger for world travelers. Like many other chargers, it does get warm to the touch when charging but no more than an Apple charger does.

Compared to Apple’s 87W USB-C power brick that costs a whopping $79, the Nekteck is a lot cheaper and a tad smaller. In fact, you’d be hard pressed to notice any meaningful difference in size or weight between the two chargers, really. 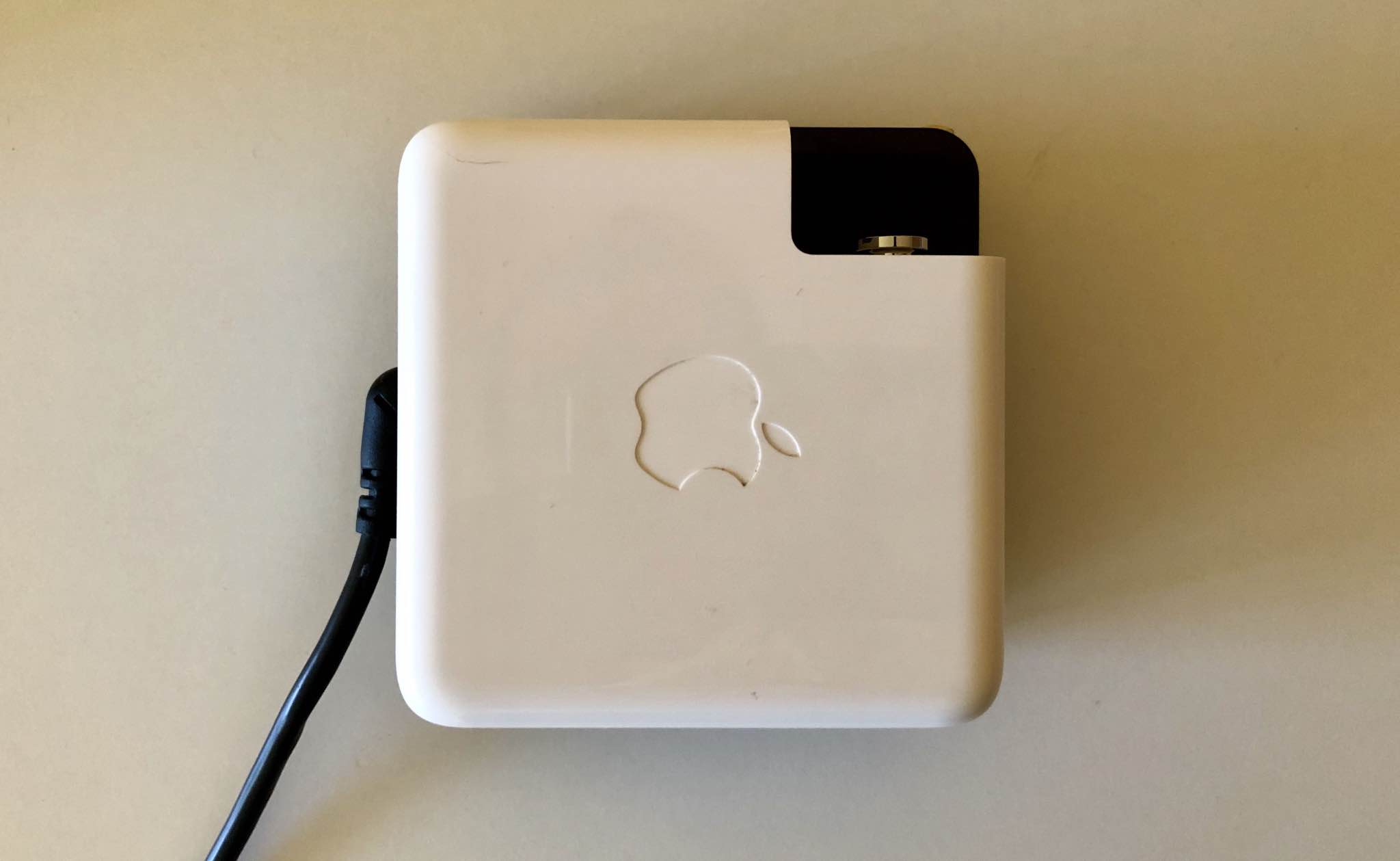 Due to its size and weight, it may not work with loose wall sockets but I’ve encountered the same problem with Apple’s USB-C bricks too. Just be sure to check that the charger is tightly plugged into the wall socket so it won’t fall due to its weight.

Unlike Apple’s notebook power adapters with a built-in USB-C port, this one has a captive cable (it’s permanently attached to the charger). Unfortunately, as no two USB-C cables are created equally, picking up a power cable that meets your specifications is not easy. 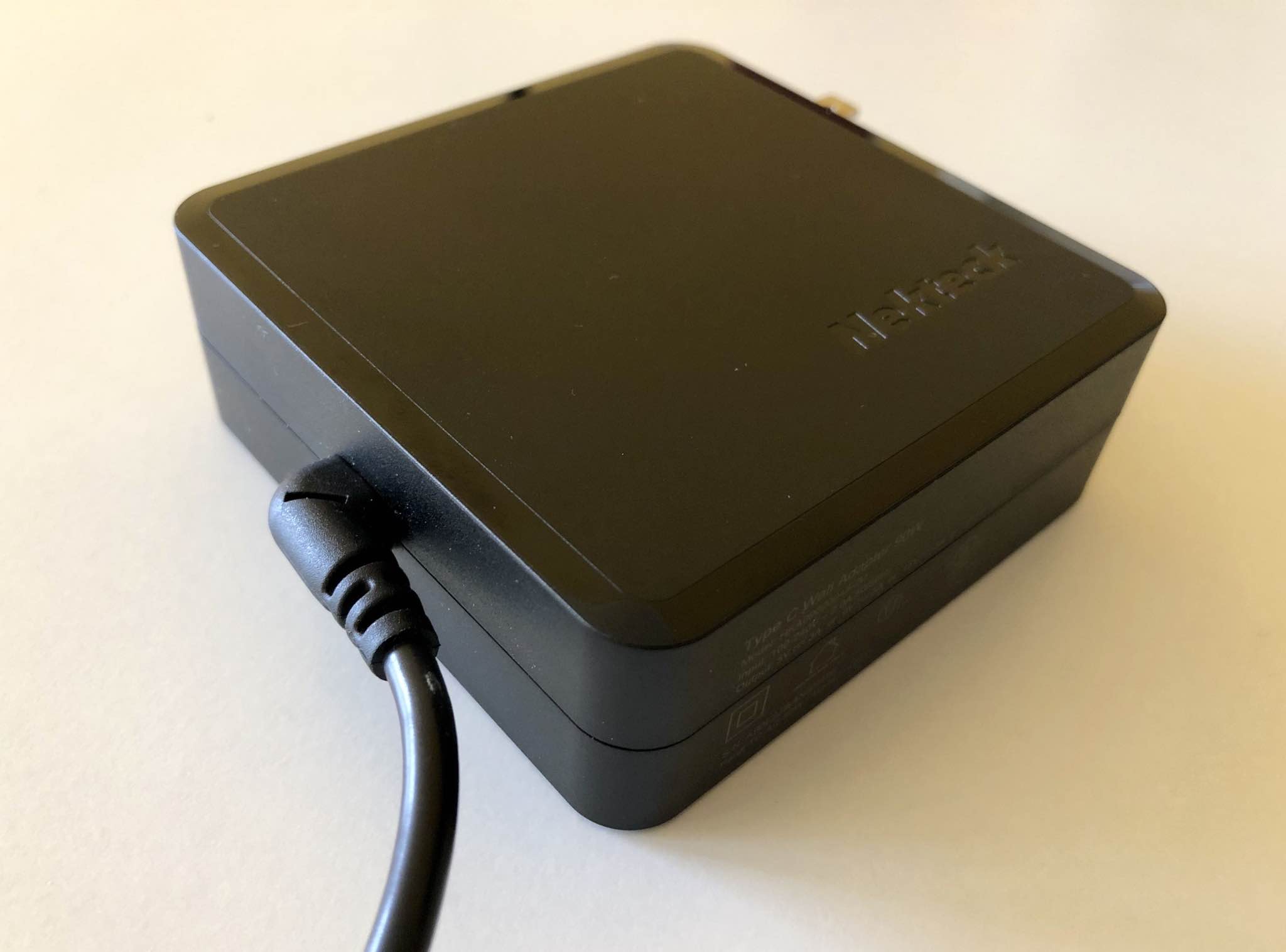 The charger features a captive cable that “just works”

Having a built-in cable saves you from all sorts of technical complications down the road. The cable is six feet long, or 183cm, which is plenty for the vast majority of use cases.

Like all USB-C charger, this one won’t work with laptops without a full-featured USB-C port. If your notebook has USB-C that only does data, it won’t get charged by this accessory.

Because the charger has a captive rather than a detachable cable, you can’t just plug Apple’s Lightning to USB-C cable into it to charge your iPhone out of the box. 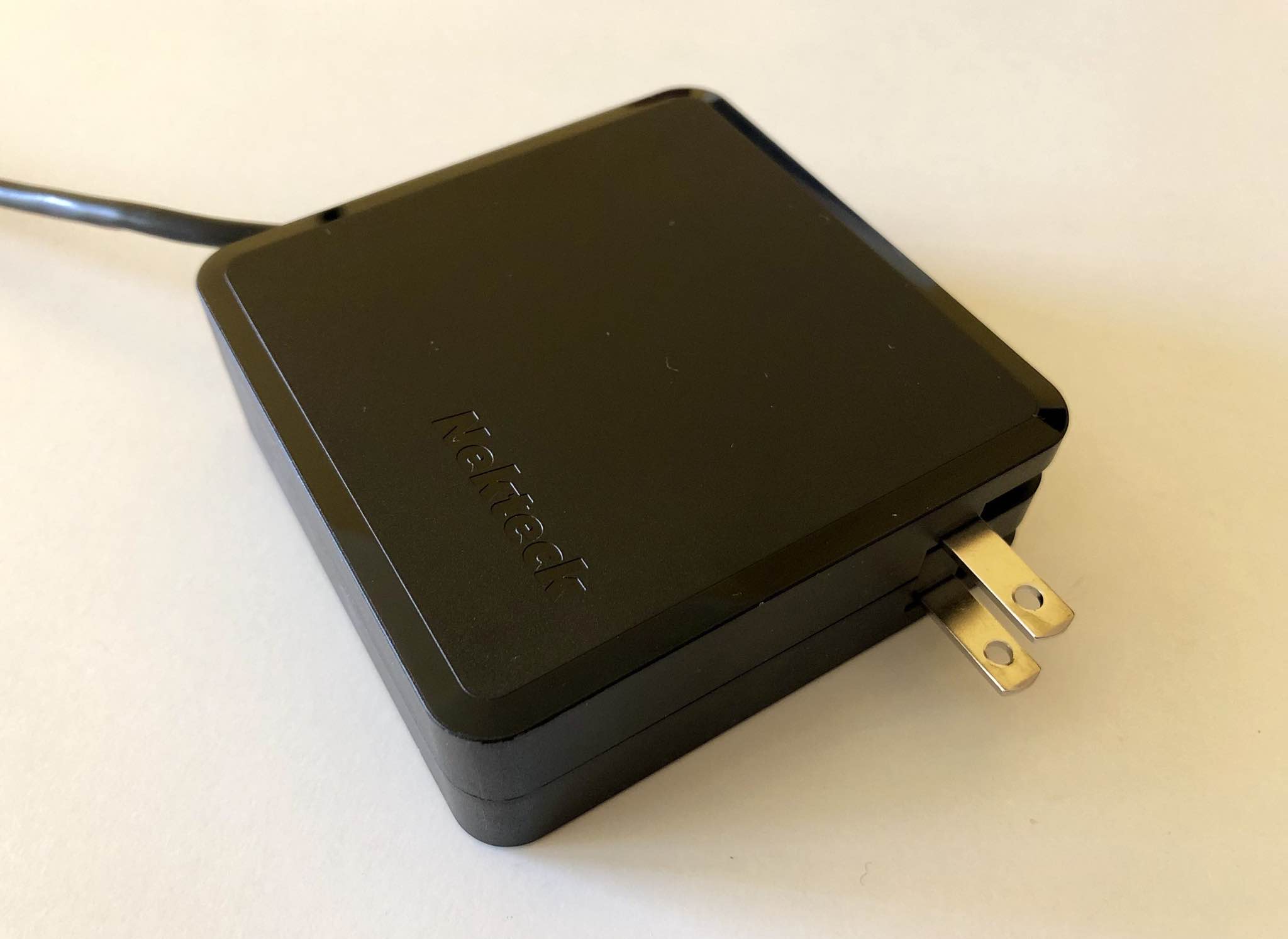 These female to male adapters are a dime a dozen on Amazon.

My minor quibble with this thing—there’s no built-in LED to indicate charging in progress, but then again most other chargers do not have LEDs either. The only major downside to it from a perspective of an iPhone user would be the absence of a USB-C port that would’ve made it easier to charge/fast-charge an iPhone using Apple’s Lightning to USB/USB-C cable. 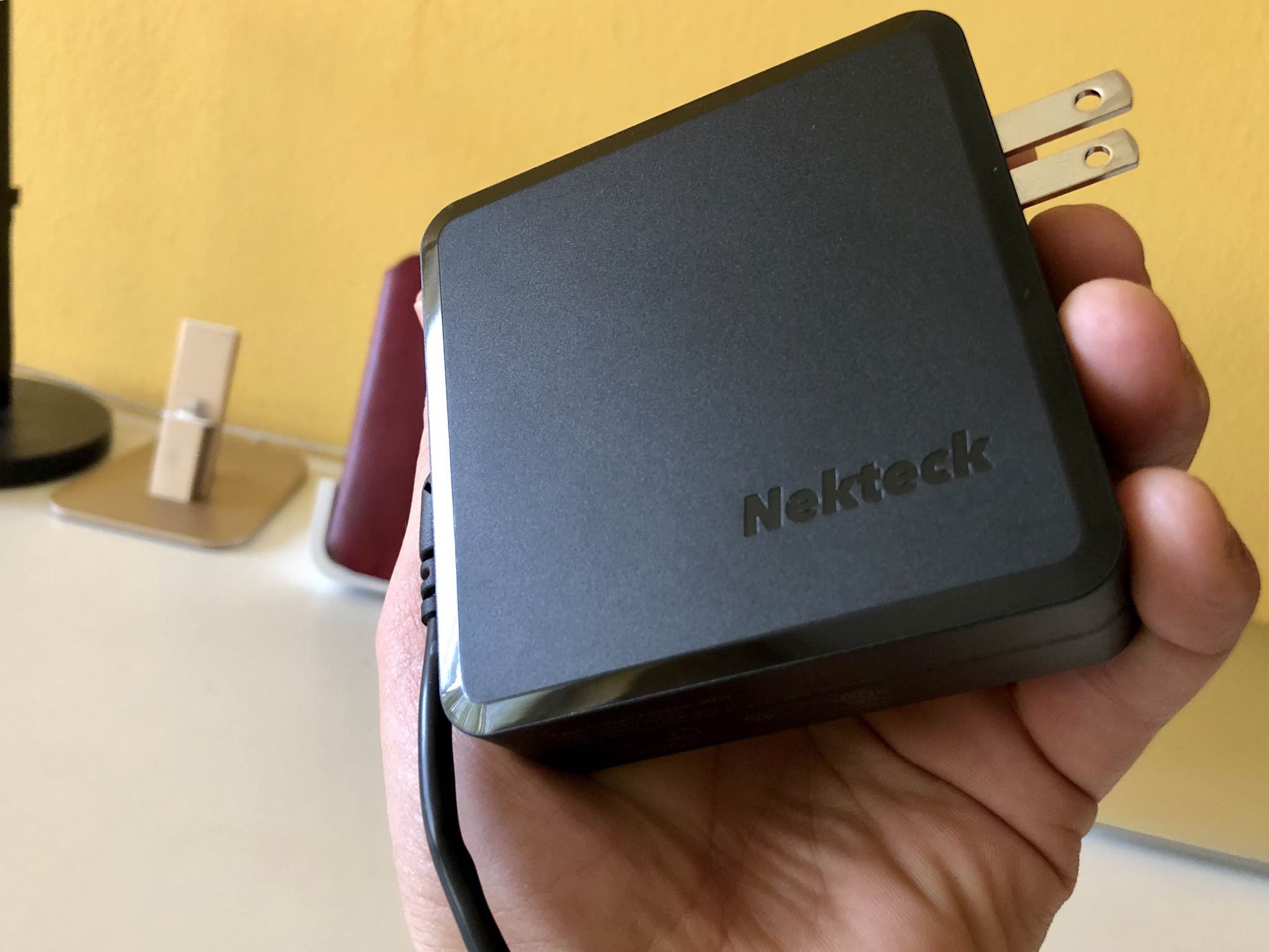 The adapter is portable and easy to lug around

As mentioned, this annoyance can be circumvented by purchasing a female-to-male cable/dongle, even if it’s not the most elegant of solutions. I don’t think this is a deal-breaker because iPhone is expected to switch to USB-C in 2019 anyway.

In that regard, the Nekteck charger is future-proof.

If you need a safe, fast USB-C wall brick featuring up to 90 watts of power for a broad range of devices that use the USB-C standard, the Nekteck device won’t disappoint you. Not only does its 6-circuit design protect from overcharging but also from over-voltage, over-current, short circuit and radiation while enabling automatic recovery.

No bigger than Apple’s 87W USB-C power adapter and just as light and portable, at just $30 it costs a fraction of the $80 you’ll need to fork out for Apple’s pricey brick. Like Apple’s charger, it’s powerful enough to efficiently charge your 15-inch MacBook Pro, Nintendo Switch or any other USB-C notebook, tablet or smartphone at full speed. 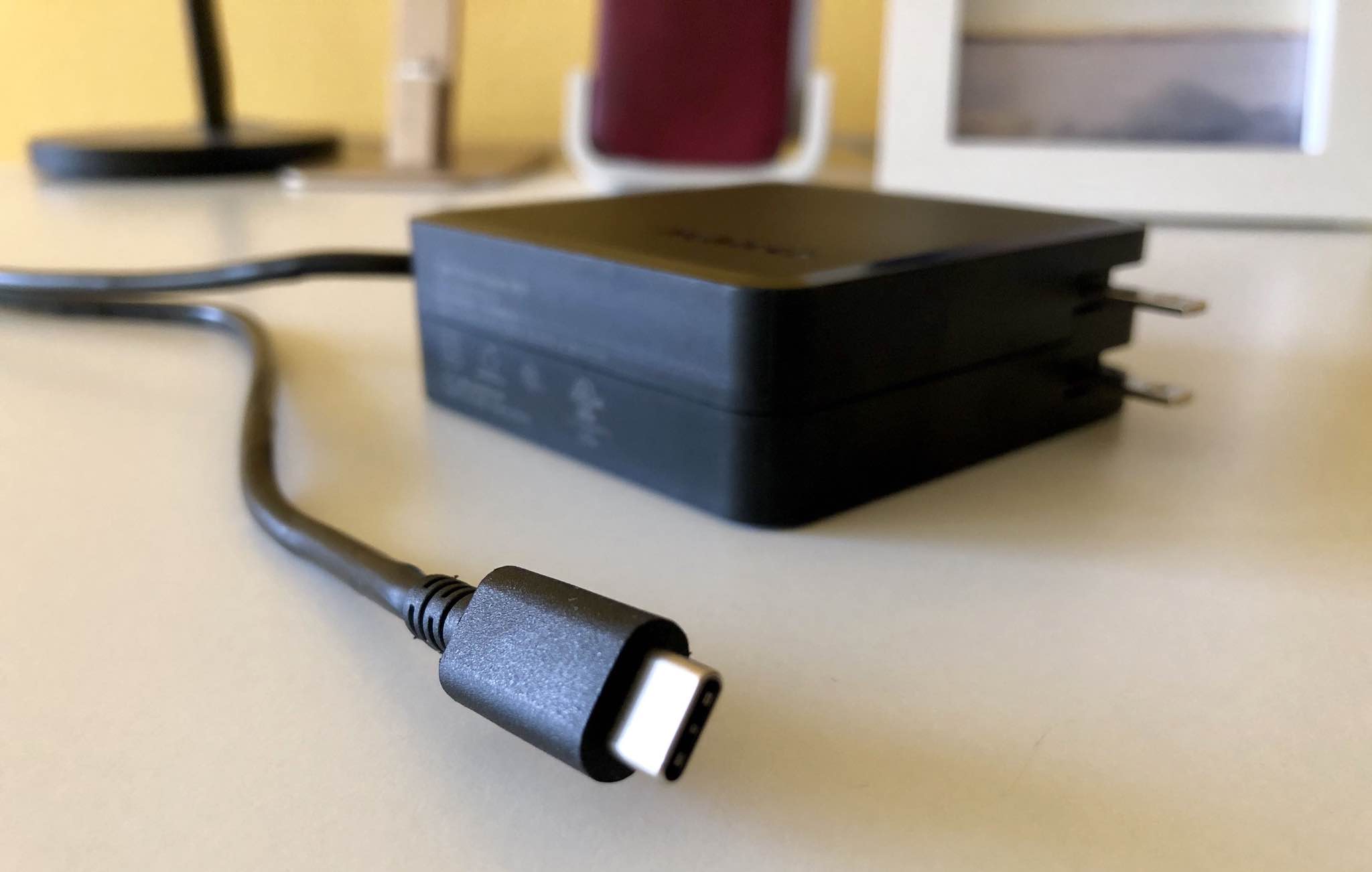 I actually used my Kill A Watt meter to see how this accessory holds up when charging power-hungry devices like the 15-inch MacBook Pro or Dell’s XPS notebooks. As is the case with USB-C chargers, it first starts out at about 30-40W, then steadily climbs over the next few seconds to the full 90W as the host device negotiates the correct charging speed with the charger (this is normal behavior for any Power Delivery-compliant charger).

To learn more about this product, visit the official website.

Here’s what we liked and disliked about this charger.

Do you need a portable wall charger that gives your USB-C devices plenty of fast-charging power and, above all, supports the USB Power Delivery standard for overcharge protection?