More than 300 Apple stores in the United States, United Kingdom, Australia and New Zealand will be selling a Harry Potter wireless coding wand starting this December.

Created by British computing and coding startup Kano, the digital wand will also be demoed in Apple stores from December to January. This is a physical device which works in tandem with Kano’s app, allowing children to build blocks of code visually in a manner similar to Apple’s Swift Playgrounds app.

These blocks of code are then transformed into a Harry Potter spell with a wave of one’s “magic” wand. The spells let kids do all sorts of things, like make feathers fly, potions bubble, pygmy puffs change color, musical notes change their pitch and so forth.

Step-by-step challenges are provided for those wishing to see how changes in the code affect the spells. The more curious types can even dig deep into the actual code.

Kano CEO told Business Insider Apple approached them to get the wands into stores.

We’ve known the folks at Apple for a while in different parts of the organization but in this instance the opportunity was to bring in the wand, especially because it’s designed ground-up to work with iOS and with tablets.

That’s not surprising at all given Apple has been teaching kids how to code with its “Today at Apple” sessions held in stores and the ”Everyone Can Code” lessons. 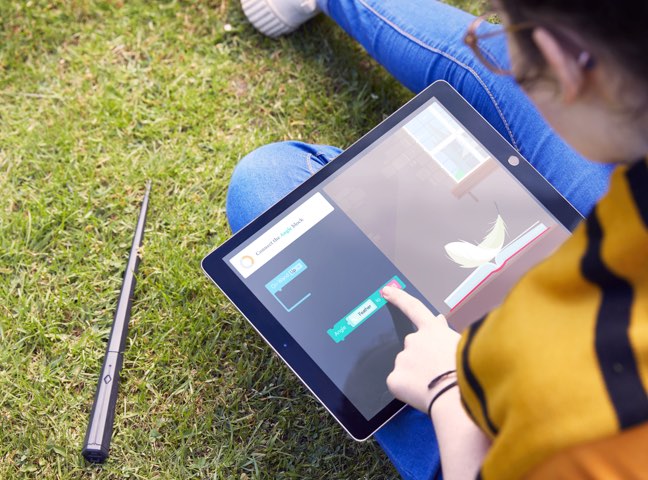 The device also works with Windows and Android.

This is yet another nice way to get kids into coding. I think it’s going to be successful because the wand is directly related to the things children dig: magic, Harry Potter lore and gadgets. I mean, how cool is it that kids get feedback from a physical object in their hand.

The Harry Potter coding kit is available from Kano for $99 a pop.