Nearly nine months after it was first released, the Siri-based Apple HomePod is now found in four of 100 homes that own a smart speaker in the United States. This compares to 23 percent of users who say they own at least one of the most popular smart speakers, the Amazon Echo.

In a survey of 1,011 users of smart speakers, Strategy Analytics found that 63 percent have an Amazon Alexa-based device in use versus 17 percent who own one from Google. The HomePod had the same percentage of users as the Amazon Echo Spot, Amazon Echo Show, Amazon Echo Kids Edition. The survey, which was taken in July and August, showed the HomePod was used by twice as many people as the more expensive Google Home Max.

Digging deeper, Strategy Analytics found that 88 percent of smart speaker owners have at least one by Amazon, while 31 percent own one from Google. Asked which brand they would select for their next smart speaker, 46 percent of respondents were unsure. The other 54 percent said they would choose one from either Apple, Amazon, or Google. 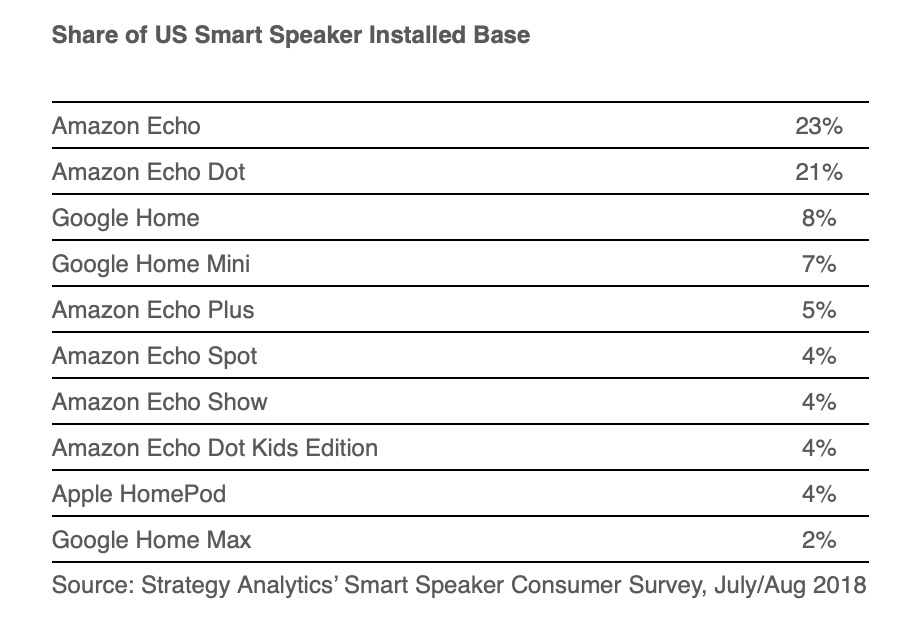 If I’m reading these numbers correctly, this suggests Apple could find some benefit in releasing a less expensive HomePod model. At $349, the HomePod is the second most costly smart speaker on the list. Only the $399 Google Home Max is more expensive. Earlier this year, rumors suggested Apple would introduce a Beats-branded smart speaker.

Amazon and Google may dominate today’s market, but this will not always be the case. Many consumers are ready to consider alternative brands, assuming they meet the high expectations identified in this study, including high-quality audio, superior design and device compatibility.

Apple first announced the HomePod in June 2017. It didn’t officially arrive in stores until this past February after numerous delays. Since being released, the device has gained occasional updates that have added new features such as the multi-room support and stereo pairing, the ability to make phone calls, and more.

What should Apple do to increase its smart speaker market share? Let us know your thoughts below.