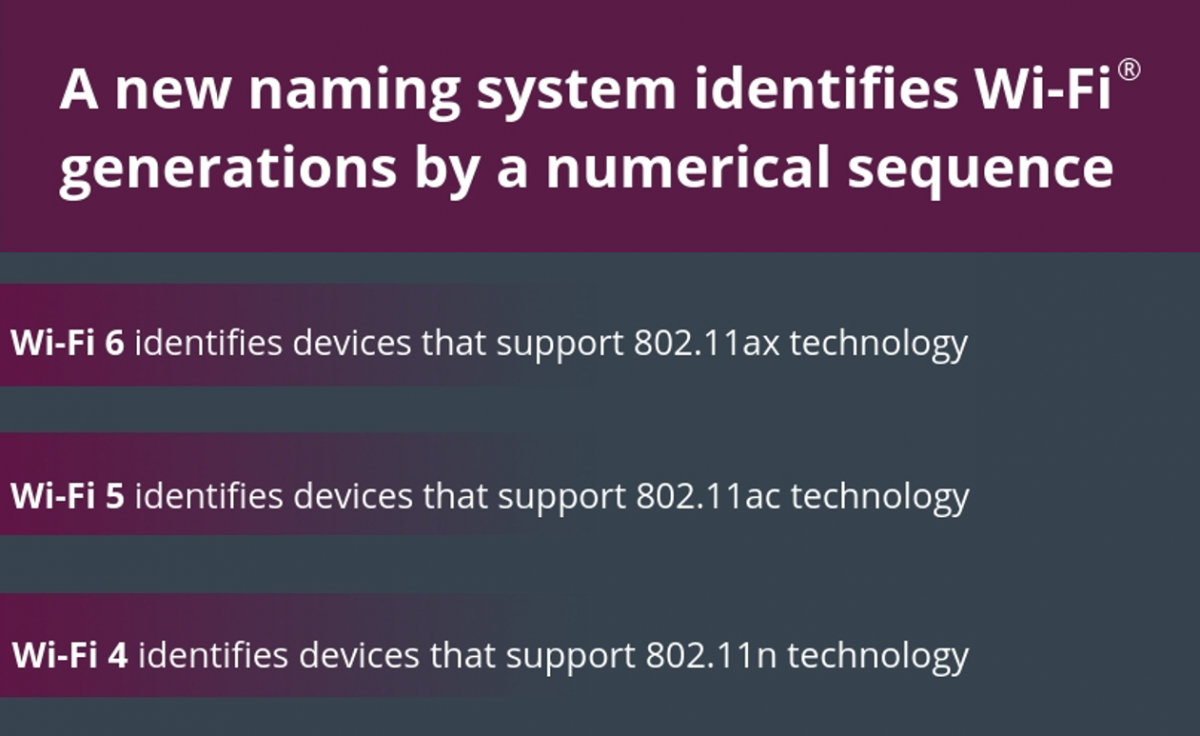 The various implementations of the ubiquitous Wi-Fi wireless protocol used to be denoted by inscrutable letters and numbers, like 802.11b, 802.11ac and so forth, confusing a lot of people who do not follow technology on a daily basis. But that’s changing as Wi-Fi Alliance, the non-profit that manages the implementation of Wi-Fi, has now simplified the naming scheme by adopting comprehensible version numbers, such as Wi-Fi 5 or Wi-Fi 6.

For nearly two decades, Wi-Fi users have had to sort through technical naming conventions to determine if their devices support the latest Wi-Fi. Wi-Fi Alliance is excited to introduce Wi-Fi 6 and present a new naming scheme to help industry and Wi-Fi users easily understand the Wi-Fi generation supported by their device or connection.

Here’s why you should care.

We’ve had a bunch of wireless protocol iterations so far, ranging from 802.11n and 802.11g to 802.11a, 802.11b and the most recent 802.11ac standard. From now on, this convoluted branding will be replaced by a single-digit variant denoting the version number that corresponds to the major advancements in Wi-Fi, as follows:

The scheme provides an easier to understand designation for wireless technologies.

The alliance has unveiled all-new Wi-Fi iconography, too.

To help differentiate client devices and routers based on their wireless capabilities, vendors and OS makers like Apple will need to adopt Wi-Fi’s new generational representation consistently across their offerings. Just don’t expect the industry to immediately universally adopt Wi-Fi’s new approach to naming because these things take time.

The alliance cannot force anyone to adopt the new branding.

The proposed user interface visuals will adjust as your device moves between Wi-Fi networks, giving you real-time awareness of your connection. Yes, your Mac or iPhone will soon clearly indicate the version of the network you’re connected to.

With multiple networks around you, there’ll be no more guessing which one’s newer and faster.

Of course, all Wi-Fi 5 devices are backwards-compatible with Wi-Fi 4 and older, and the same goes for the latest Wi-Fi 6. Each generation of the wireless protocol offers faster speeds, increased throughput, better experiences and other new features and improvements.

At the same time, Wi-Fi Alliance introduced the next-generation of wireless networking, Wi-Fi 6.

Based on the new 802.11ax technology, Wi-Fi 6 is designed to operate in the existing 2.4 GHz and 5 GHz spectrums but will also use bands between 1 and 7 GHz as they become available.

The above advancements result in up to four times increased throughput versus 802.11ac due to the more efficient spectrum utilization. Aside from the higher data rates, Wi-Fi 6 will also benefit users with solid performance in dense environments and improved power efficiency.

Here’s an overview of the new Wi-FI 6 capabilities:

Wi-Fi 6 certification and first devices are expected to arrive in 2019.

Korean carrier SK Telecom has managed to push Wi-Fi 6 towards delivering the kind of speeds it says will rival those of 5G cellular wireless networks. Concretely, maximum transmission speeds of up to 4.8Gbit/s were confirmed, or four times the throughput of the existing 1.3Gbit/s theoretical speed supported by the current Wi-Fi 5 standard.

Meanwhile, first Wi-Fi 6 versions demoed at CES 2018 showed a top speed of 11 Gbit/s. We should point out that SK Telecom modified the Wi-Fi 6 protocol to hit those record speeds.

As Daring Fireball’s John Gruber noted, not only were the letters used prior to this change inscrutable, they didn’t even go in alphabetical order.

How do you like the new naming system for Wi-Fi generations?