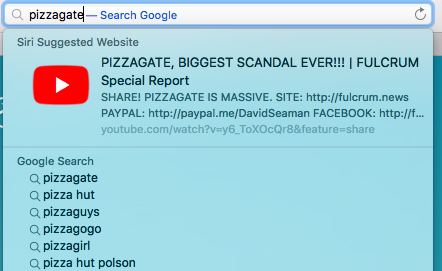 As soon as you start typing into Safari’s Smart Search field, the browser pulls up suggestions for the terms you type. It’s unclear if Apple previously applied some kind of a quality filter, but they are certainly doing it now following a report Wednesday on BuzzFeed News.

When BuzzFeed News entered incomplete search terms that might suggest contentious or conspiratorial topics, the search algorithms directed us toward low-quality websites, message boards or YouTube conspiracy videos rather than reliable information or debunks about those topics.

Warzel has discovered that typing in “Pizzagate” would prompt Safari to return links to YouTube videos by conspiracy theorist peddler David Seaman. The video doesn’t play since Seaman’s channel was taken down for violating YouTube’s terms of service, but still…

“Such results raise questions about the company’s ability to monitor for low-quality information, and provide another example of the problems platforms run into when relying on algorithms to police the Internet,” notes the write-up. Apple has removed all examples of the questionable suggestions following the report.

A company spokesperson told the publication:

Siri Suggested Websites come from content on the web and we provide curation to help avoid inappropriate sites. We also remove any inappropriate suggestions whenever we become aware of them, as we have with these. We will continue to work to provide high-quality results and users can email results they feel are inappropriate to applebot@apple.com.

Safari suggestions (officially called Siri Suggested Websites) are powered by Siri intelligence, much like other suggested content in Apple’s operating systems. Now that Apple has removed fake news content from Safari’s optional suggestions, people are likely to stop seeing this promoted content across other places that support Siri web suggestions, like Look Up.

TUTORIAL: How to disable Safari Suggestions

Search engine suggestions for the queries you type in Safari’s URL bar can be disabled independently of the aforementioned suggestions, right in your Safari settings.