The Stanley Cup playoffs are just getting underway, and that means hockey games almost every night of the week for the next several weeks. Keeping up with the latest matches, scores, and big plays can be tough.

Thankfully, keeping up with the playoffs doesn’t mean you need to commit several hours a day, in front of multiple TVs, watching every second of every game. Whether you’re looking for highlights or stats, brackets or scores, or even live streams of the games, the Stanley Cup Playoffs are right at your fingertips with these great iOS apps. 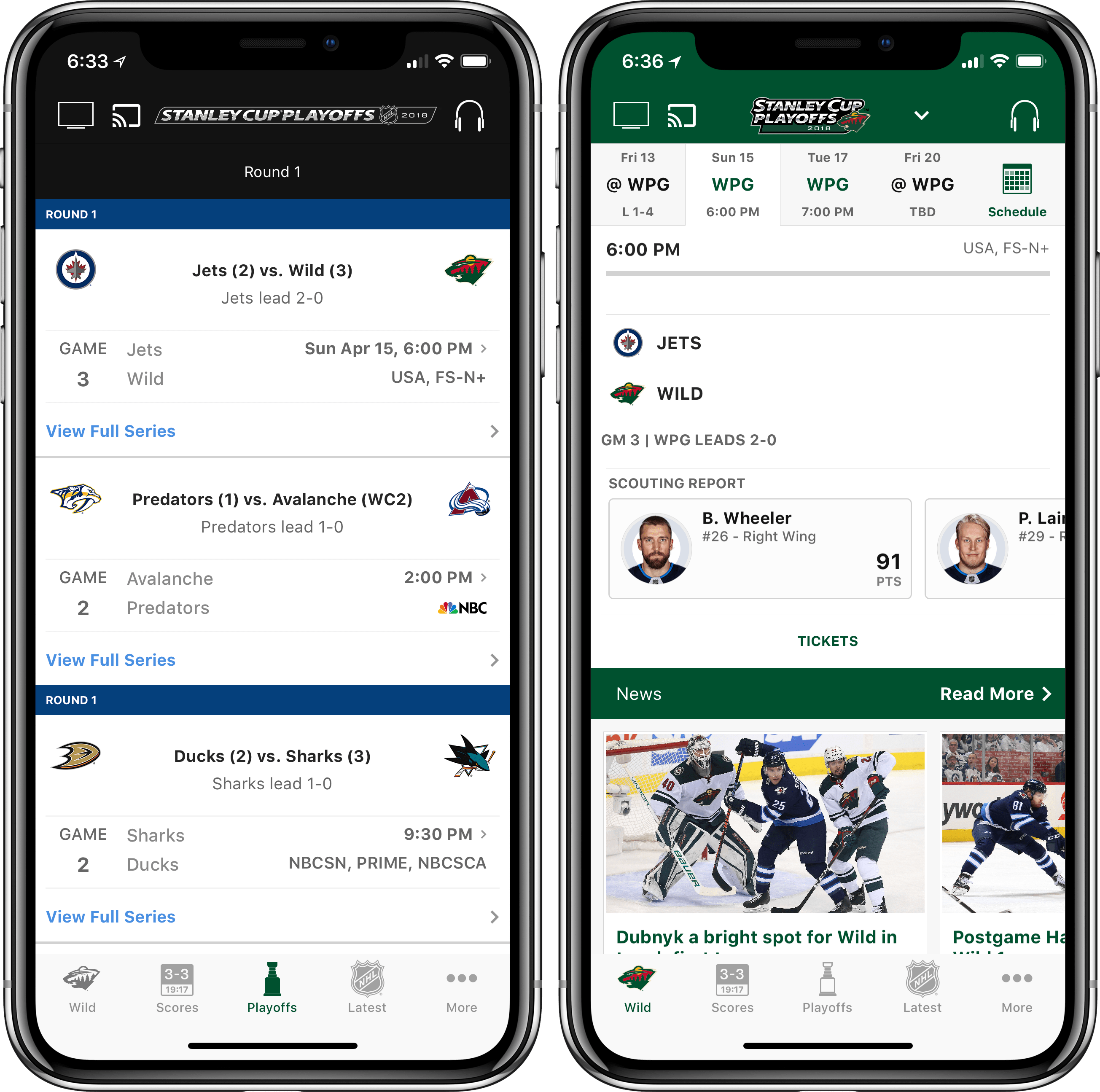 The most obvious place to start when looking for details on NHL games, scores, standings, and highlights is the NHL itself. With the NHL app, users can get team news, score alerts, and a plethora of notifications to keep up with in-progress games. Additionally, the app icon can be personalized with your favorite teams logo for die-hard fans.

One drawback of the NHL app is the lack of live video stream for local blackout games and most Stanley Cup games. The app is very pushy about trying out NHL.tv, but the fine print is worth reading if you’re hoping to watch games live. If listening to the game is enough for you, the app does offer a play-by-play broadcast of each Stanley Cup match. 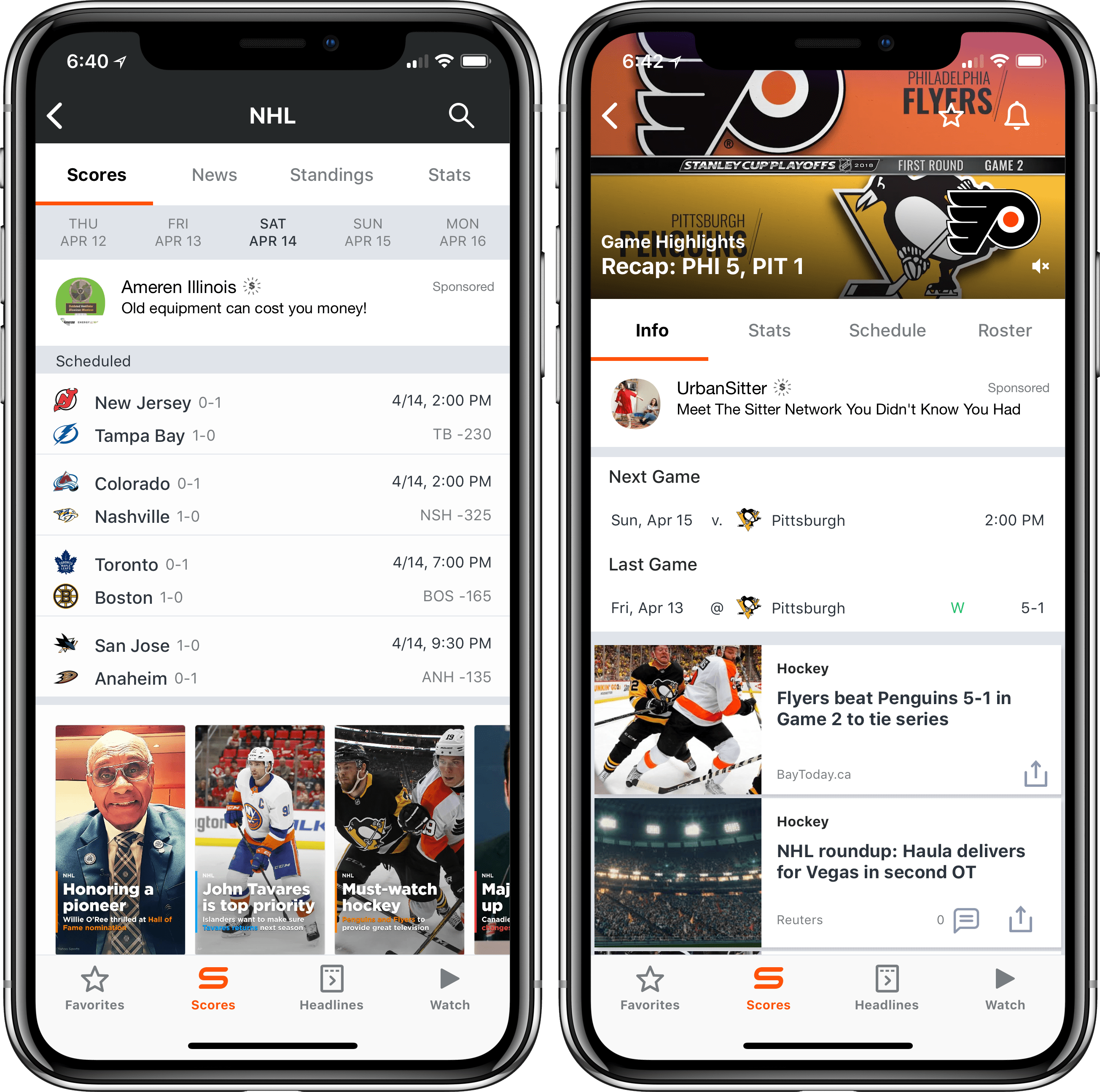 The Yahoo Sports app (formerly Sportacular) is a great app for news and scores around the NHL, but it’s also excellent for Sports fans beyond just hockey. Within the Yahoo Sports app, you can access scores, standing, highlights, and news from NHL, MLB, NFL, NBA, NCAA, PGA, several other acronyms, international sports, auto racing, and the Olympics. If you’re a sports fan, the Yahoo Sports app is one of the best sports news apps in the App Store.

From a Stanley Cup perspective, Yahoo Sports is great at giving summaries of scoring plays and penalties in real time. Score alerts (push notifications) are also great for staying aware of happenings in the game when you’re unable to watch. As a bonus for the gamblers out there, the Yahoo Sports app also offers details on the odds and over/under for each game. 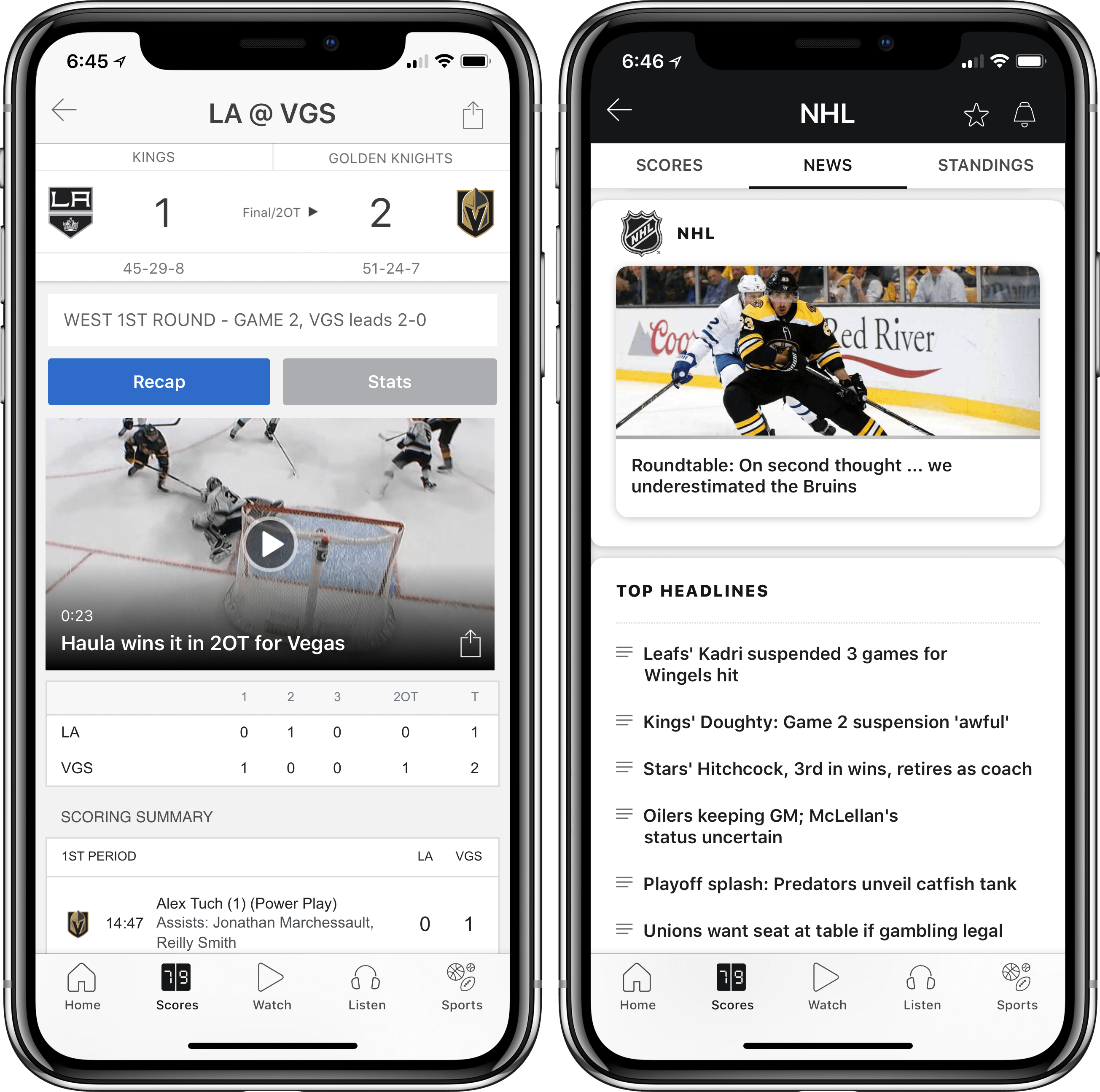 Much like the previous app, ESPN is a catch-all sports app, with a heavy focus on news and analysis. Within each match up, for almost every sport, the ESPN app gives you their “GameCast” live, text-based play by play. 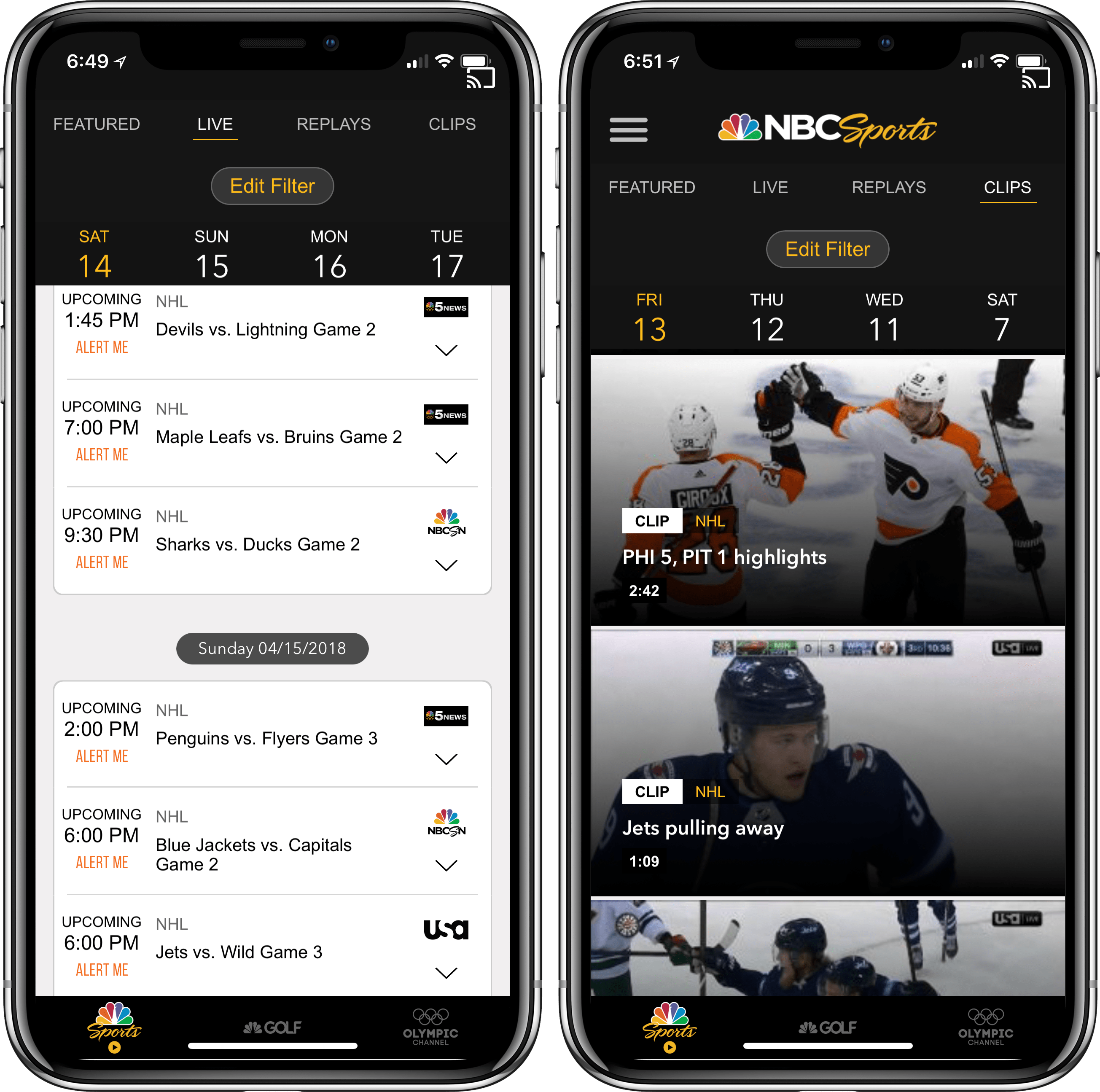 NBC Sports is the app you need if you want to watch Stanley Cup Tournament hockey on your iPhone or iPad. While the app does require a cable provider sign-in to get access to live streams, you can watch every game of the playoffs via the app.

In addition to being great for watching games on your iPhone or iPad, the NBC Sports app for Apple TV adds the ability to stream those same games in your living room. Unlike the others, the NBC Sports app is less useful during the regular NHL season, where games are broadcast on non-NBC properties (or are restricted by blackouts). 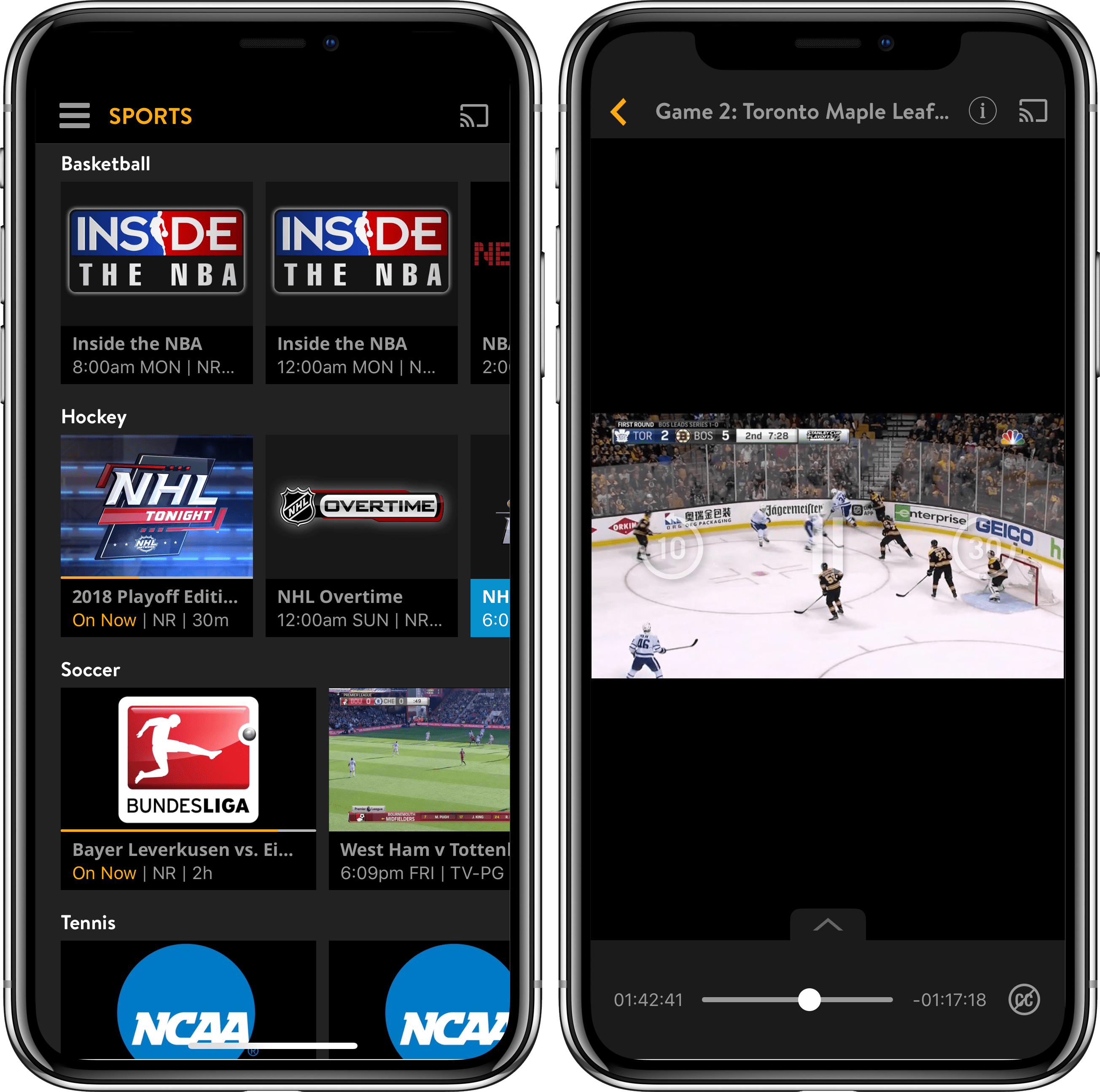 The final app on the list isn’t really a hockey app, but instead is an alternative option for watching the Stanley Cup playoff games when you don’t have a cable subscription. Sling TV is a “skinny bundle” tv service offering a range of channels without the need for a satellite or special cable box.

With the Sling TV “blue” bundle, for $25 per month, you can get access to NBC Sports Network and USA, which play host to most of the games. For an additional $10, you can add in the Sports Extra blue package, granting you the golf channel, which – for some unknown reason – hosts a selection of early Stanley Cup games. A final addition of the $5 blue-level News Extra package adds in CNBC, which also hosts a handful of games. All-in-total, getting Sling TV to watch every possible playoff hockey game will run you $40/month, but you get the added bonus of tons of other channels and content to keep you entertained between games.

Have any other apps we should know about for watching or keeping up-to-date with the happenings of the NHL? Have a team you’re rooting for? Let us know in the comments below.