Like other Apple devices, your HomePod permits you to set custom alarms.

You can create multiple alarms using just your voice, optionally add some context to them, if you like, and more. Your Siri speaker will signal you when one of your created alarms goes off.

Siri on HomePod allows you to create as many alarms as you want, manage them, remove ones you no longer need, turn specific alarms on or off, create recurring alarms and more.

Alarms do not synchronize across multiple devices via iCloud. Any alarms created using your HomePod will not appear on your Mac, iPhone or other devices, and vice versa.

How to set multiple alarms with HomePod

To set a custom alarm clock or a reoccurring alarm, use standard Siri voice commands, wording, relative times and phrases like you would on your iPhone, Mac or Apple Watch.

Here are some examples of using absolute and relative times to set an alarm.

Before you retire for the evening, ask Siri to wake you up in the morning.

When your alarm goes off early in the morning but you’d like to stay in bed just a little longer, you can easily snooze the alarm by saying “Hey Siri, snooze.”

Unlike with timers that provide a handy countdown feature, there’s unfortunately no such thing for alarms, not on your HomePod nor on any other Apple device for that matter.

You can add context to your alarms by tweaking voice commands with reminder-like language, such as in the half a dozen examples included below.

Doing so labels your alarm accordingly, which allows you to reschedule it more easily. More importantly, having a labeled alarm permits Siri to read out aloud what it’s all about.

An alarm created on your HomePod, be it active or inactive, can be easily adjusted in case you accidentally set it to go off at the wrong time or Siri misheard you.

This works best if you name your alarms as described in the previous section.

You can ask Siri to read either all your current alarms or just a particular alarm.

This will prompt Siri to read out an alarm you’ve set along with its on/off state and label.

How to turn alarms on or off

Any previously set alarm can be enabled or temporarily turned off at will.

A disabled alarm stays in your alarm list until you delete it.

How to dismiss or snooze alarms

You can dismiss an alarm on your HomePod in two ways, using Siri or the speaker itself.

To stop an alarm through Siri, just say “Hey Siri, stop.” To dismiss an alarm without invoking Siri, you’ll need to get up and tap anywhere on the top of your HomePod.

If you’d like to snooze an alarm, just say “Hey Siri, snooze” after it buzzes.

A snoozed alarm on HomePod (or any Apple device for that matter) will go off again in nine minutes and continue to alarm based on your snooze action until you eventually dismiss it.

For those wondering, nine minutes has been the alarm clock industry standard for ages.

How to delete alarms

Deleting a particular alarm or all alarms with Siri is a breeze.

Any alarms in your Alarm list stay there until explicitly deleted.

Managing alarms in the Home app

Alarms on your HomePod can also be created, deleted, managed and edited in the Home app.

2) Long-tap or press with hold your HomePod in the Home or Rooms tab.

3) Scroll down a bit to Alarms.

4) Tap New to create a new alarm or select an alarm you’d like to adjust to make changes.

5) Tap Done to keep the changes and exit. 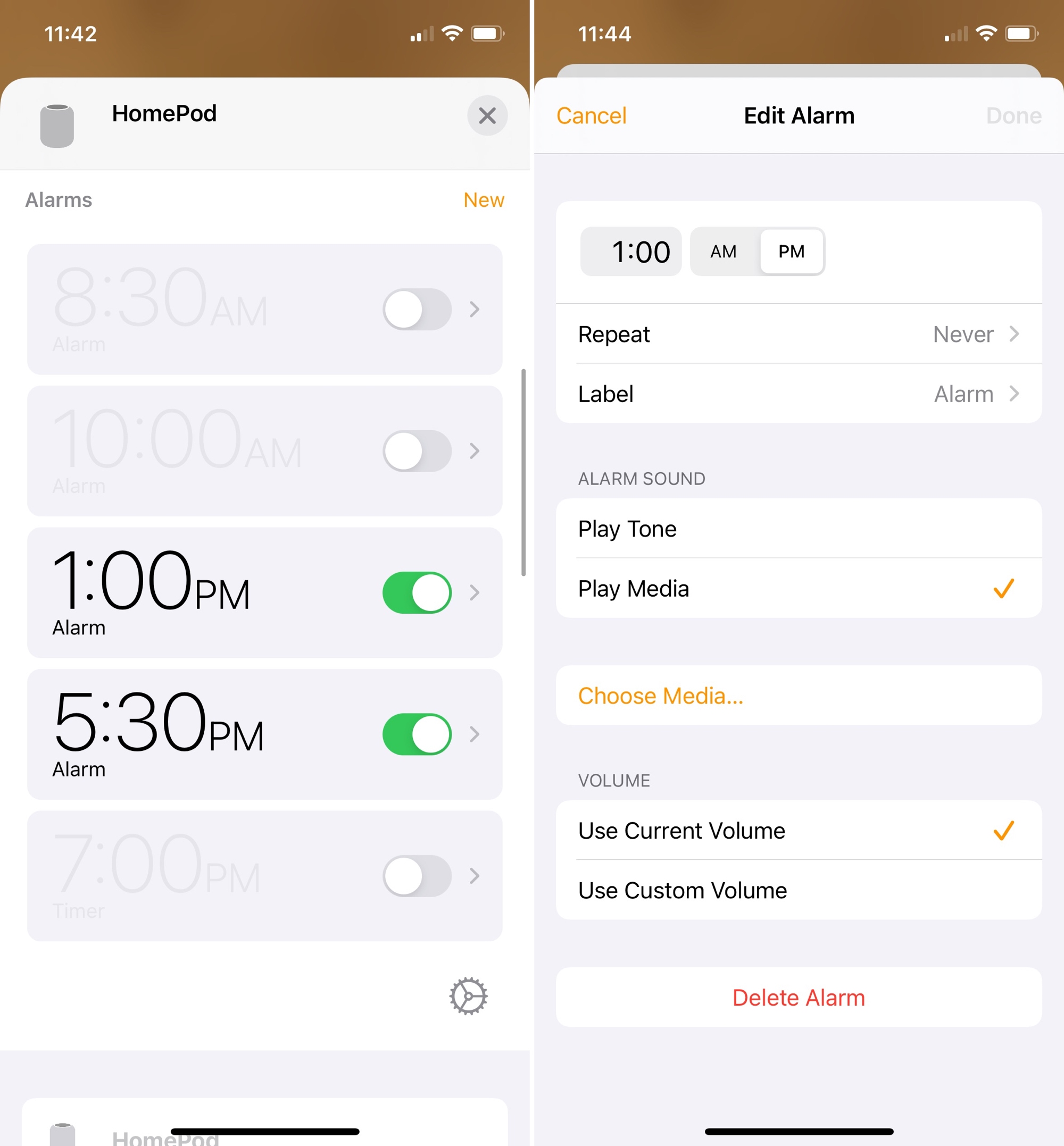 You can delete any alarm via the Home app in two different ways: 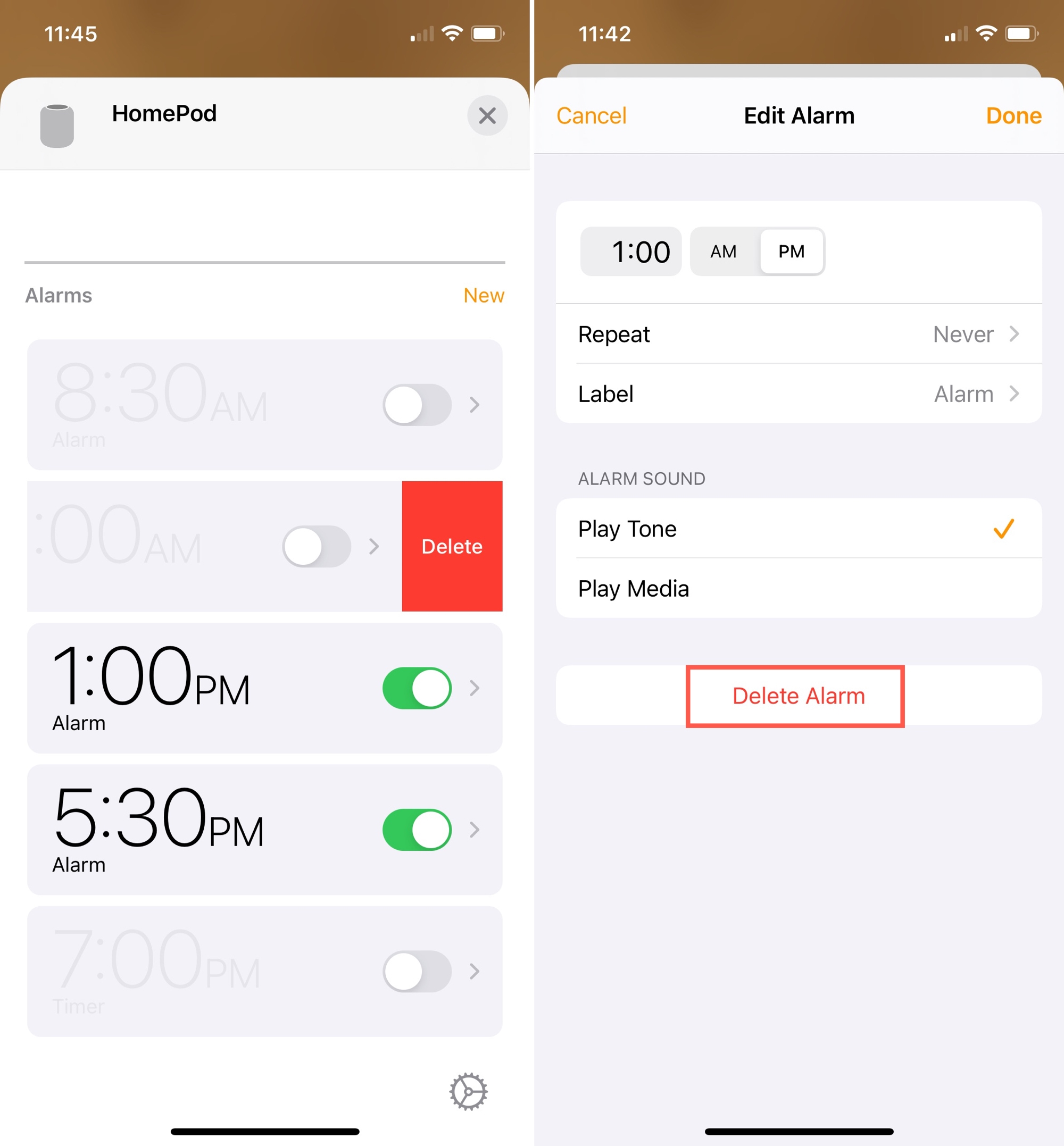 Submit your how-to suggestions via tips@iDownloadBlog.com or hit us up on Twitter.