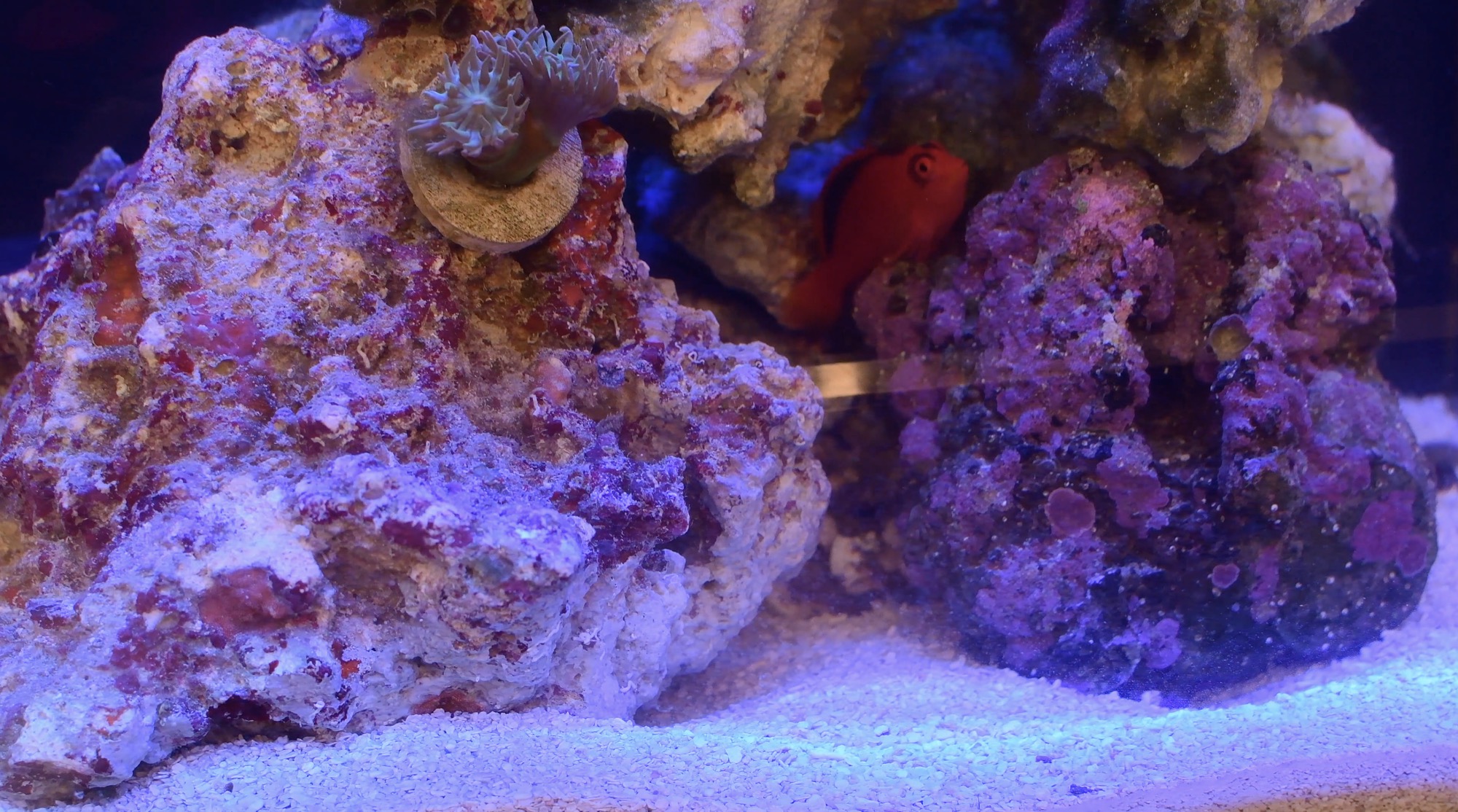 There are so many unique applications for HomeKit, many of which we’ve explored. One of my favorite applications in my own home has been creating custom HomeKit lighting solutions for my pair of fish tanks.

I have two fish tanks. One is home to a saltwater reef ecosystem, and the other are many freshwater plants and fish.

When I was looking at lights, I found them to be quite limited in features, on the large size, not particularly attractive, and most of all expensive.

Compared to off-the-shelf fish tank lights, these are quite capable. You can dim them, schedule/automate them, and change the hue. They are also more affordable!

You can see how I put them together in my quick video. Then read on for more details on two different options for HomeKit fish tank lights.

My search for the perfect lights

What I was really looking for when I was researching different lights was something that afforded me quite a bit of control. The freshwater has live plants, and of course my salt tank has several corals, all of which have strict lighting requirements.

I needed control over the color, the brightness, and when it turns on/off.

I hastily learned that anything that did what I wanted would be fairly pricy. It was then that I decided to build my own. 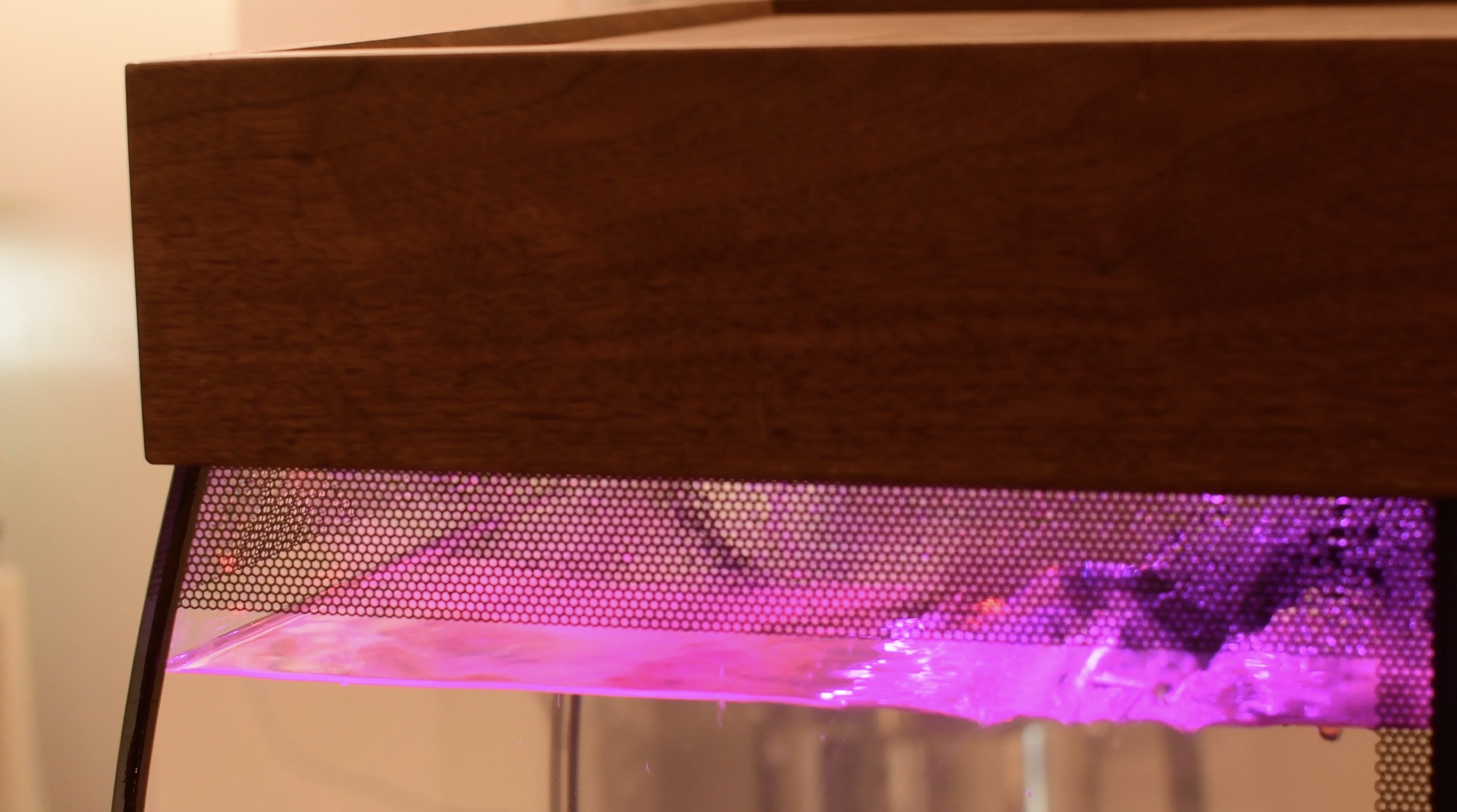 I came up with two different ways of accomplishing what I wanted through HomeKit.

The first is a simpler, cheaper, and easier method. It works will enough, but didn’t give me quite enough control.

The second is more in-depth and costly, but has much more control.

We will go through the methods for both of them.

The most straightforward way to create a HomeKit fish tank light is to simply use a HomeKit outlet. 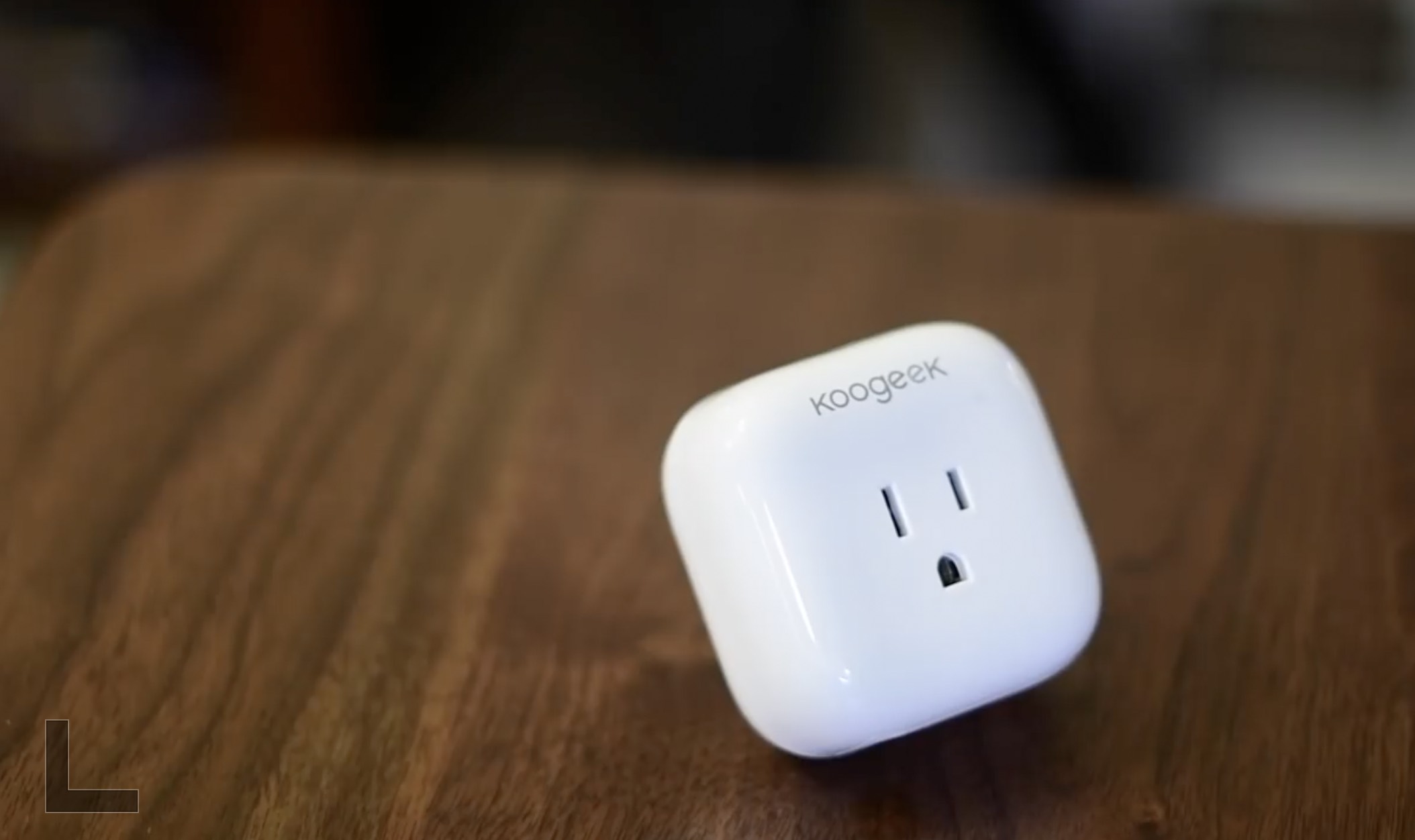 We’ve covered them from Elgato, Koogeek, ConnectSense, and there are many more out there. You simply plug in any light you want, then use the Home app to schedule and control it.

This works great for the basics like having the light turn on and off at different points throughout the day. 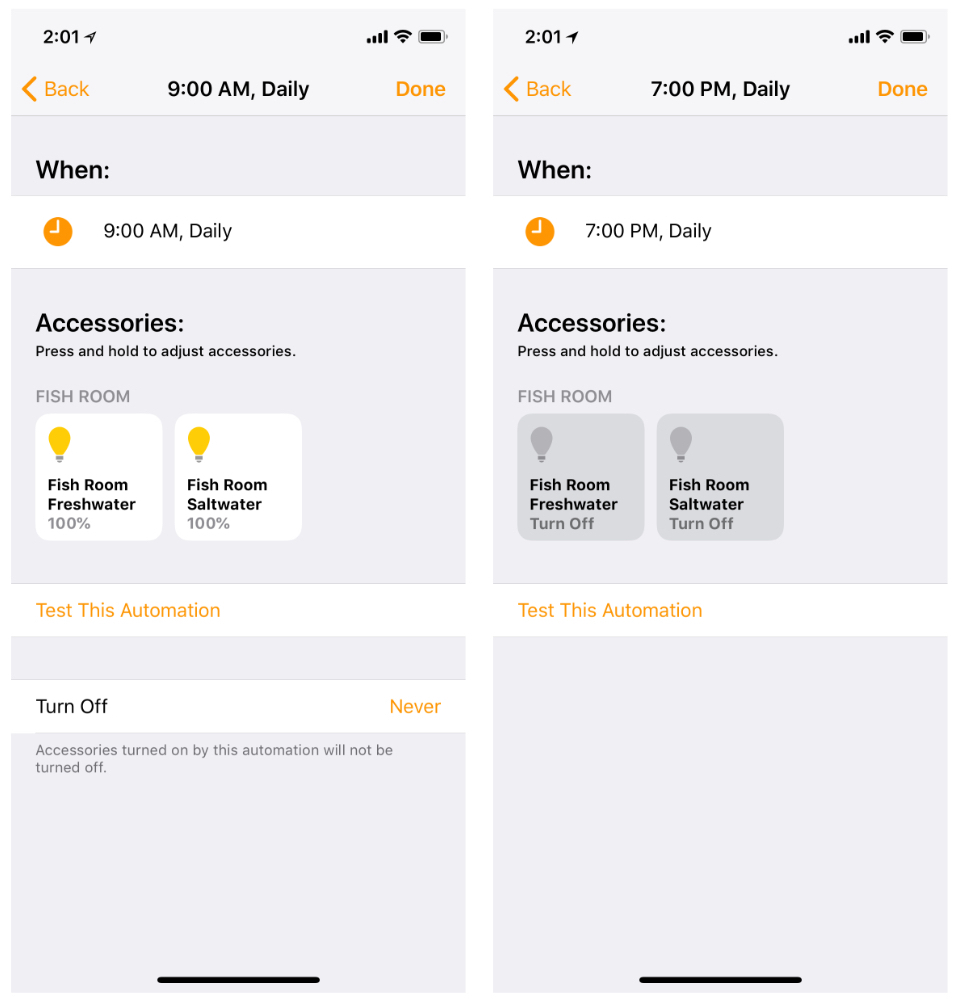 I just created a scene where each day the light comes on at 9am, and second scene where it goes off at 7pm.

If I ever have a bit of an algae bloom, I simply disable that primary scene, and enable a secondary scene that has a shorter duration to help cull the algae issue.

The biggest limitations is that it does not allow me to dim the light at all, I have no control over the hue, and I can’t set a different light during the nights.

That is where method #2 comes into play.

If you really wanna get complicated (as I did), you could try out the advanced method. Which involves more HomeKit automations, as well as some physical handiwork.

I mounted two wooden dowels wrapped with a HomeKit light strip inside a wooden box. I then used a piece of plexiglass to separate the lights from the water. 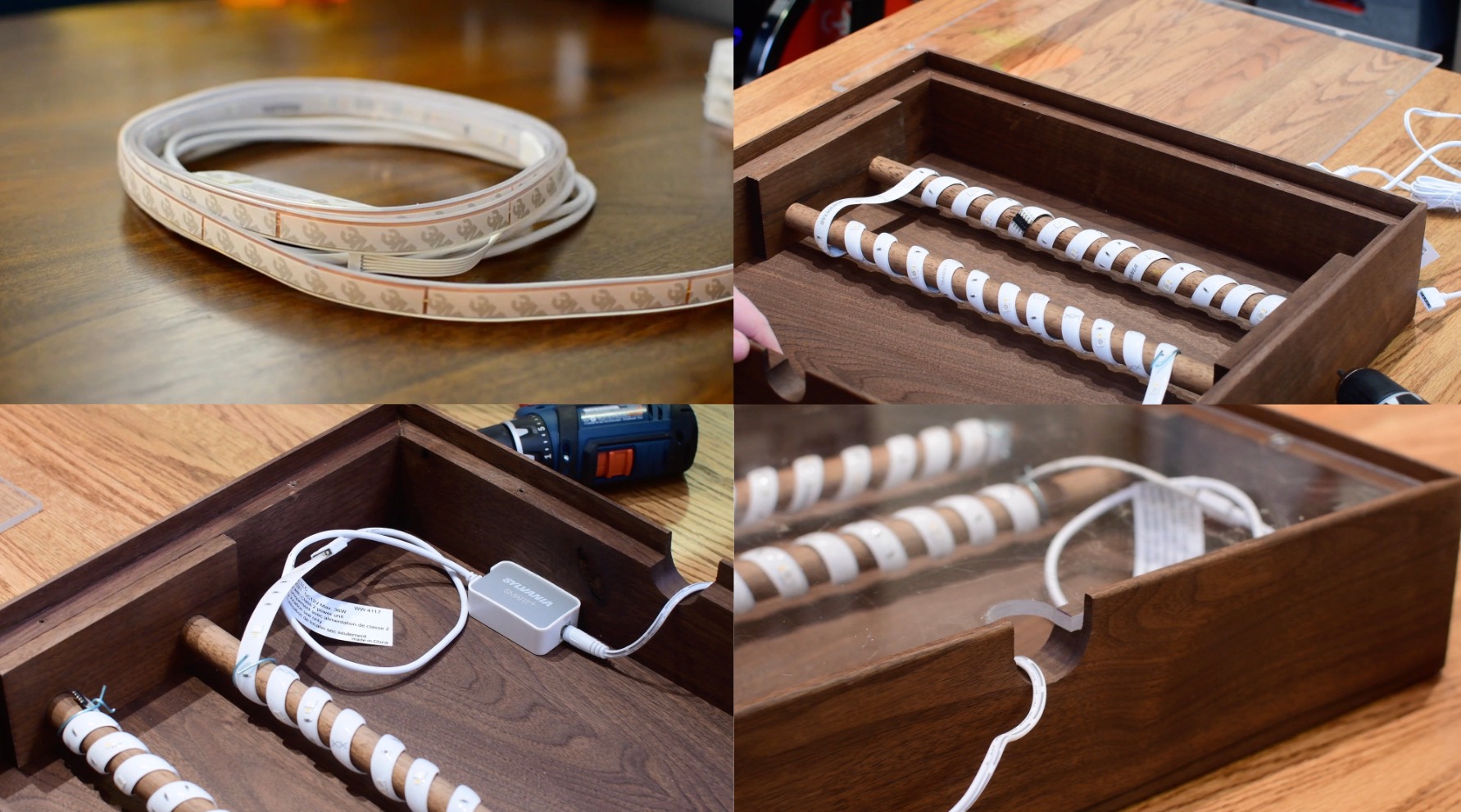 Inside the box, but behind the lights, I put a piece of reflective aluminum, to help focus the light downwards.

Personally, I used the Philips Hue light strips as they produced the highest amount of lumens, but you can use ones from LIFX, Sylvania, Koogeek, as well. Hue requires a hub, which could be a downside if you don’t already have one.

As far as the box goes, I made it out of walnut, to match the interior of my home, with a simple oil finish. 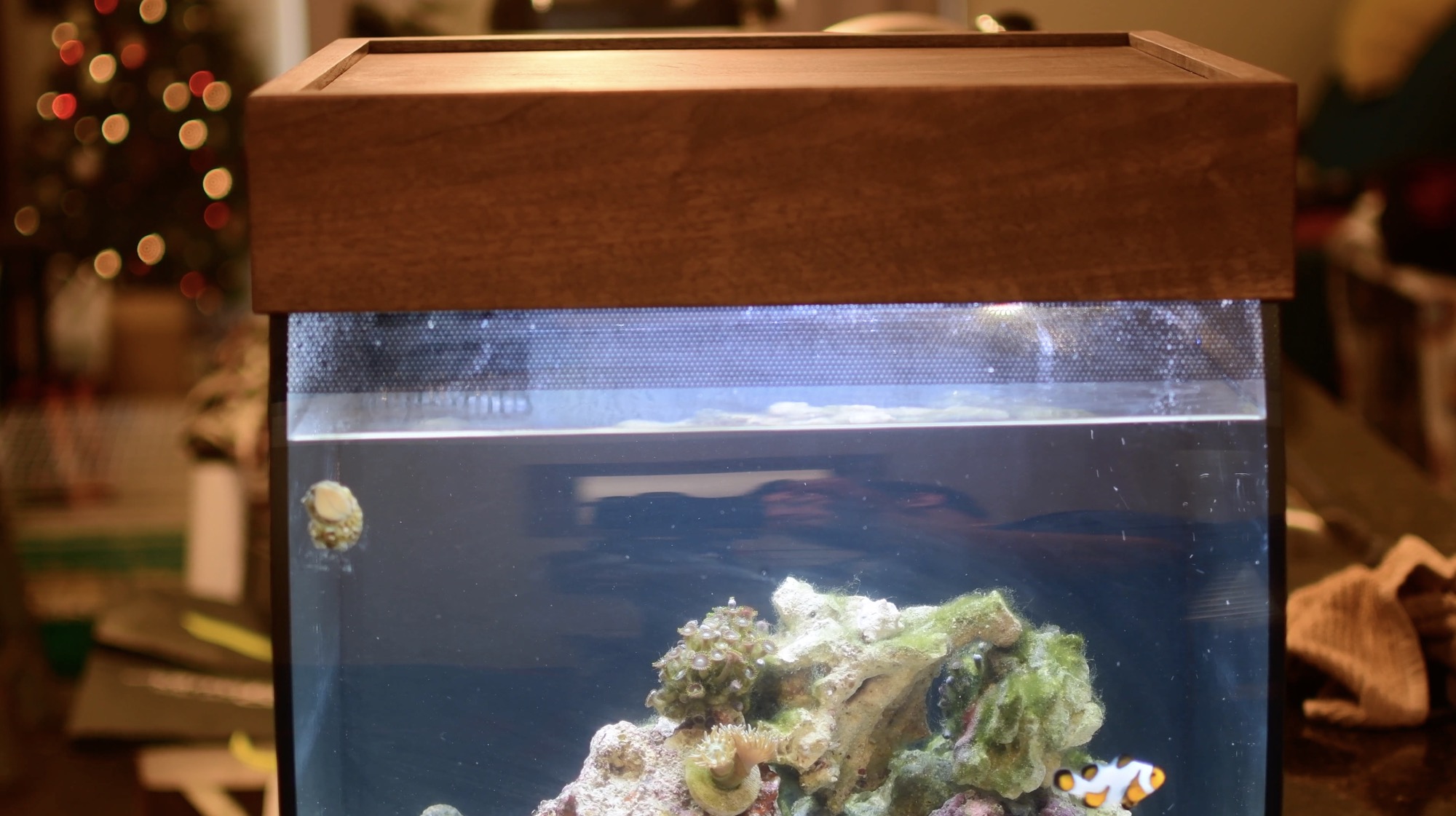 The dowels inside were 3/4″ in diameter which was small enough to stay compact, but also wide enough to allow the light strip to easily wrap around.

When it came to automating them, all the sudden I had a whole lot more options. I could change the color with the sunset. I could have some “moonlight” overnight. And I could not only shorten the duration, but dim the lights if I have any issues with algae. 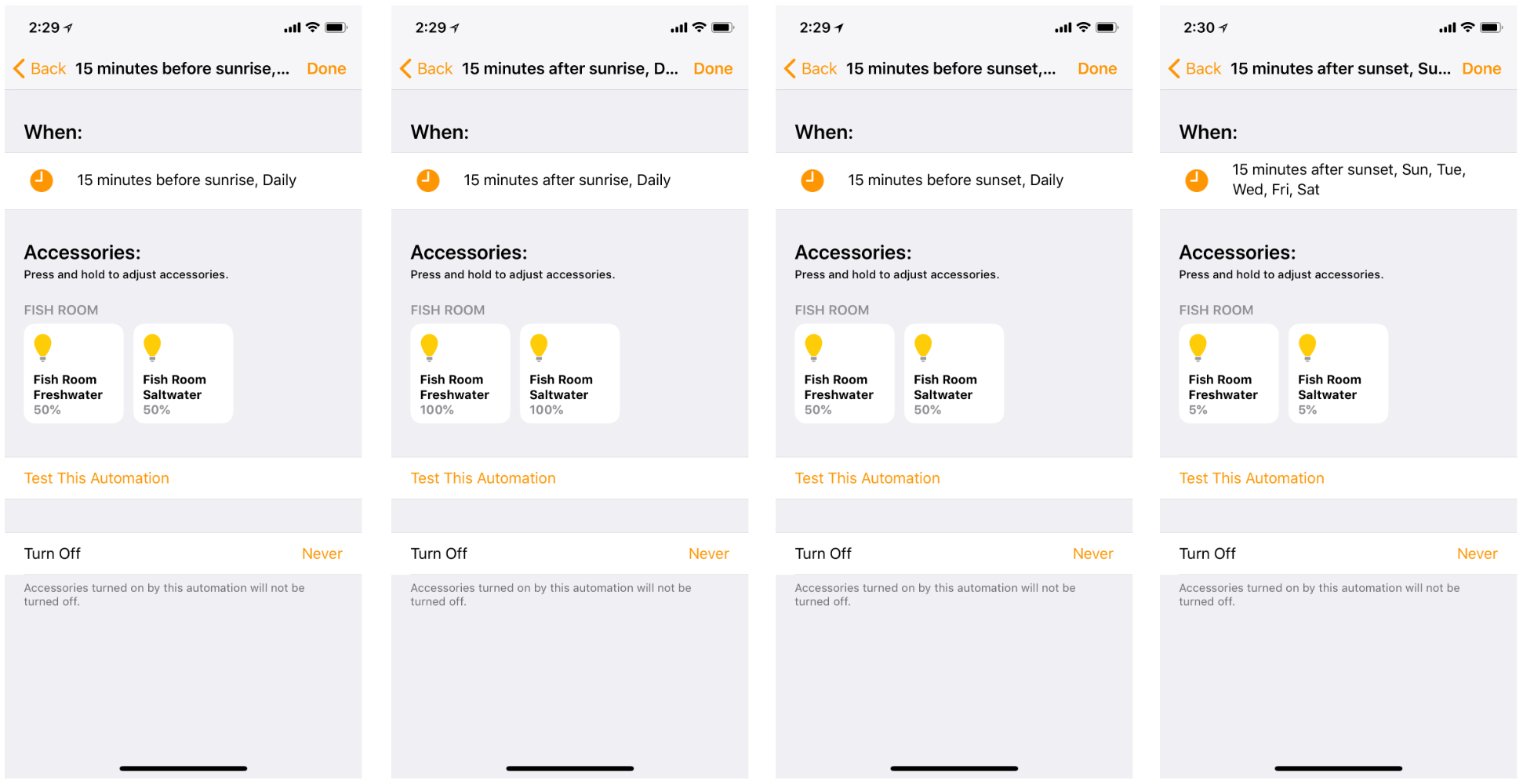 The basic set up I went with was to have the lights at 100% brightness during the day, about 50% brightness and a yellow tint during sunrise and sunset, and a 5% blue light five nights during the week.

In practice, it works out well. The reason I have the moonlight effect only some nights is because in the ocean, they don’t always have light. It can be overcast, or just the shape of the moon. It offers some real-life variance.

You also have to create a fifth scene to turn the light completely off on Monday and Thursday when you don’t have the moonlight effect on.

I created the light originally for my smaller tank before taking on the task once more for the larger tank.

In doing so, I learned a lot between my first iteration and my second.

To start, While I measured the tank, I didn’t account for the extra space taken up my the caps on the corners. I had to drill these out a bit after the fact on the first tank, and something I allotted for the second time.

I also had an issue with my finish. The freshwater posed no issue, but my saltwater tank left some marks on the wood. I had to adjust the finish to help repel the water when I crafted the light for my salt tank. 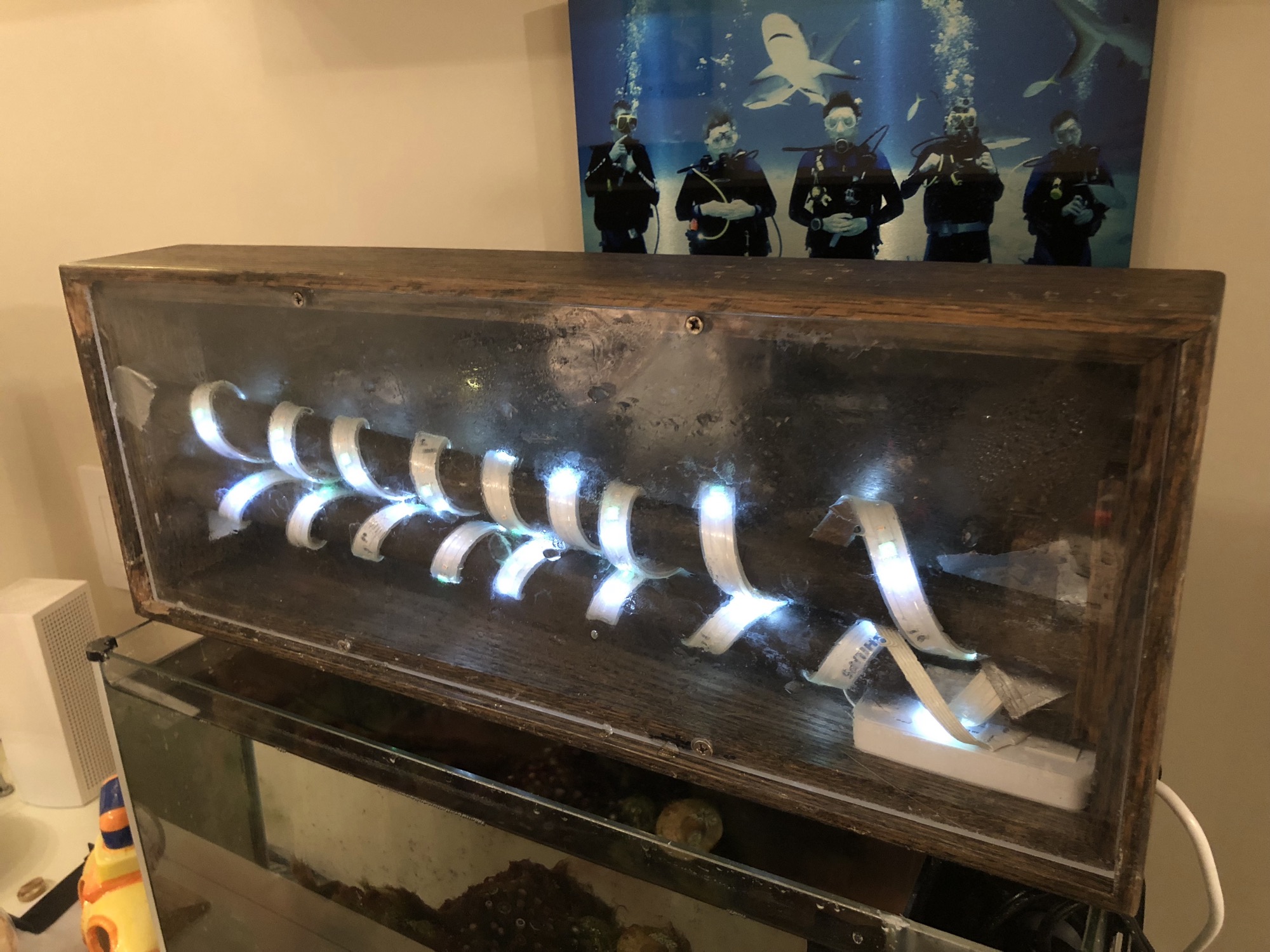 The dowels also posed a problem for me. I wanted to make them easily movable, but also needed them to stay in place. On the first try, I had two guides on the bottom, which worked, until I set the lid on its side and the dowels tumbled out of their resting place. I solved this on V2 by putting a second guide on the top as well, so that way they could not come out of the grooves. 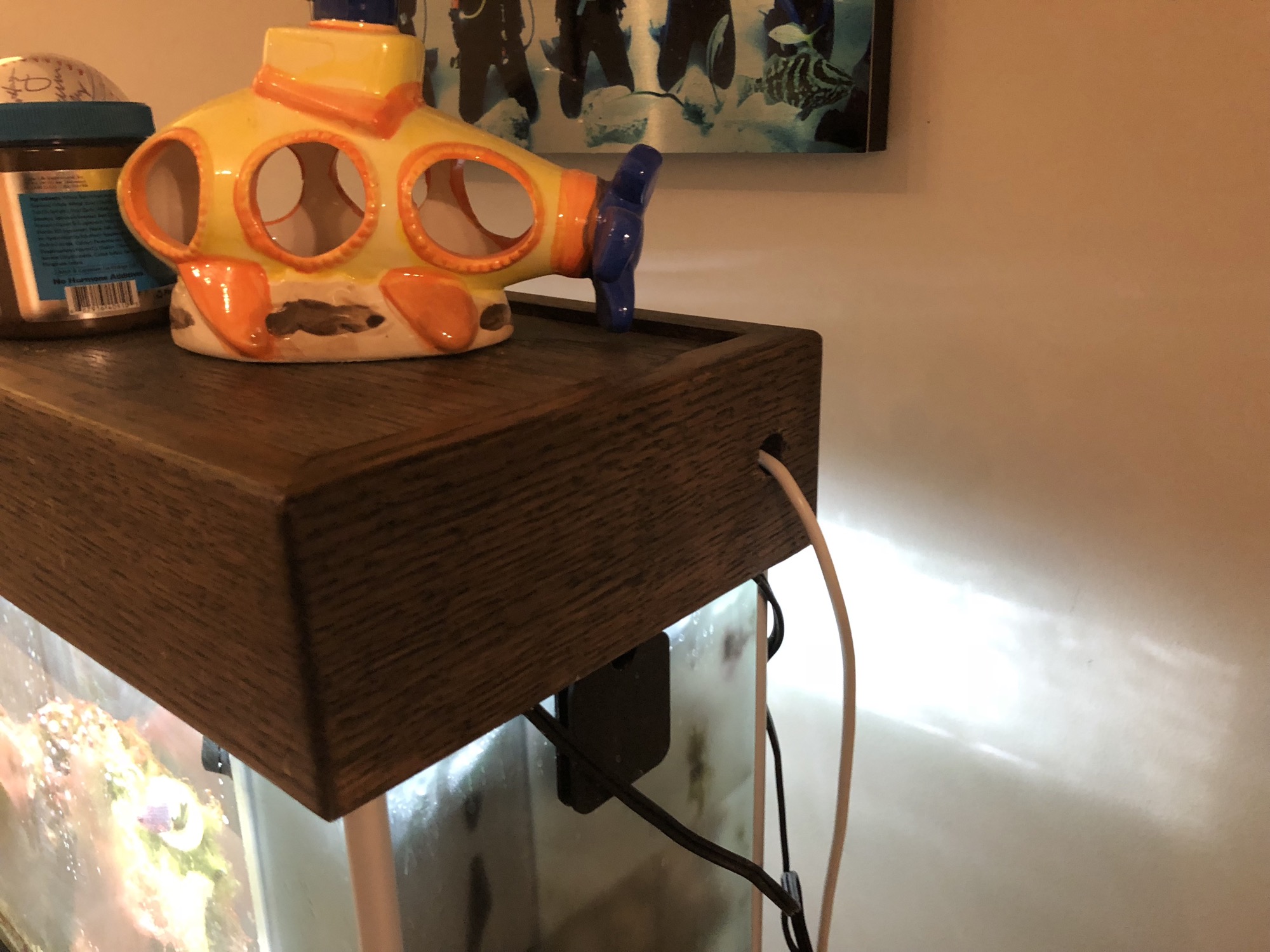 Lastly, I didn’t properly account for the various cords I had coming out of my tank. My salt tank has a heater, a pump, and a circulation fan. That, coupled with the Hue light strip power cable, I needed to make sure I could route all of these easily out of the tank, with the lighting hood sitting flush.

I know my solution here has a bit of a niche audience. Only those interested in smart homes, as well as those who have fish tanks would really have a use for such a setup.

It is something however, that I’m quite proud of. I’ve used my original light for coming up on two years, and I just recently added my second light.

My tanks have flourished with them, with plants growing quickly, and corals strong and healthy. 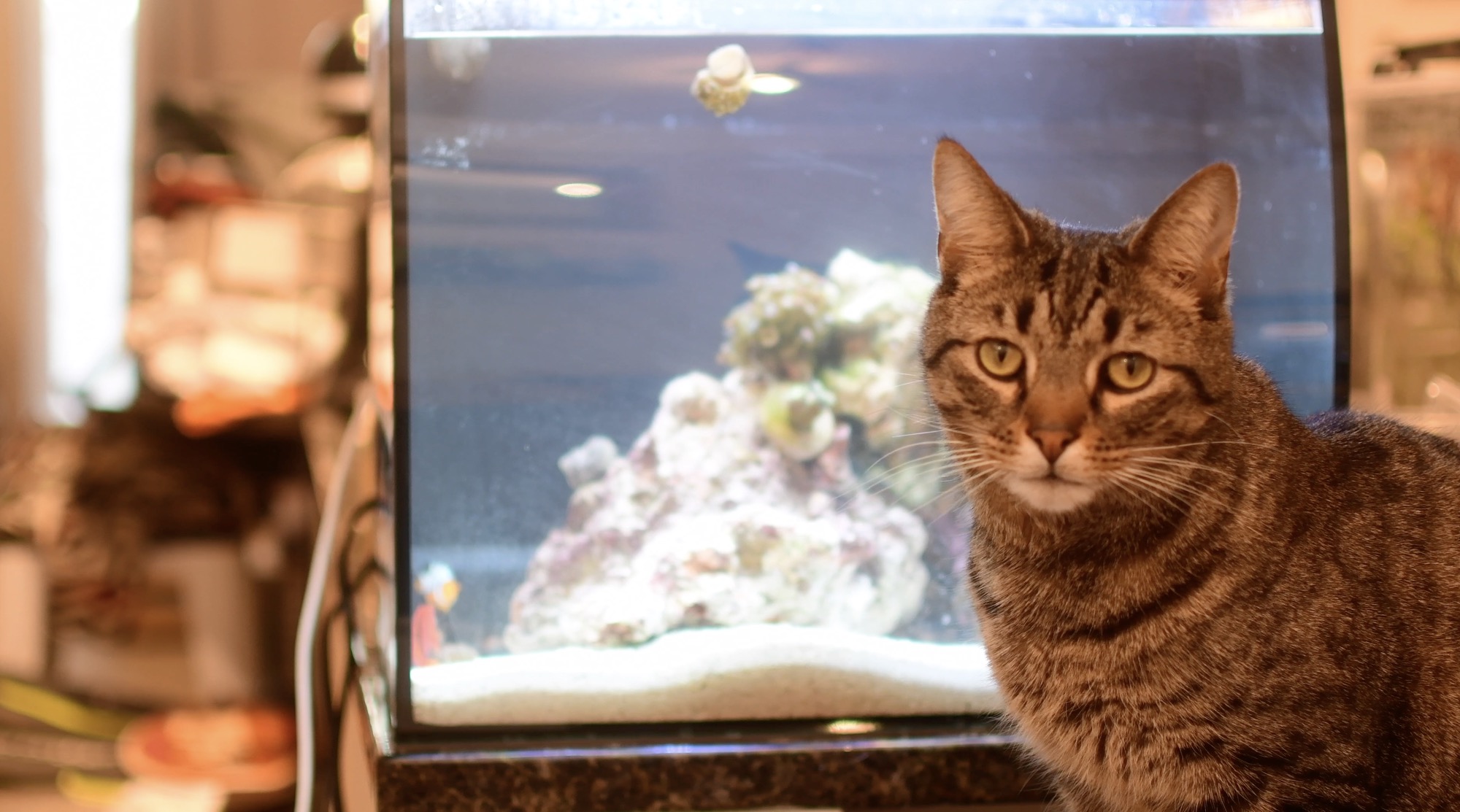 This was quite an in-depth process that took some trial and error from the wood finish, to the exact light strip I chose to use.

I’ve been so thrilled with the results, and they’ve received plenty of attention from anyone who shows up in my home. Fish, especially those in the salt tank, can be expensive, and the light is a crucial aspect to keeping them healthy.

What do you think of my custom HomeKit fish tank lights? Do you have your own personal smart home projects you’re proud of? Let us know in the comments!

Be sure to check out our HomeKit Automation series for other HomeKit ideas!