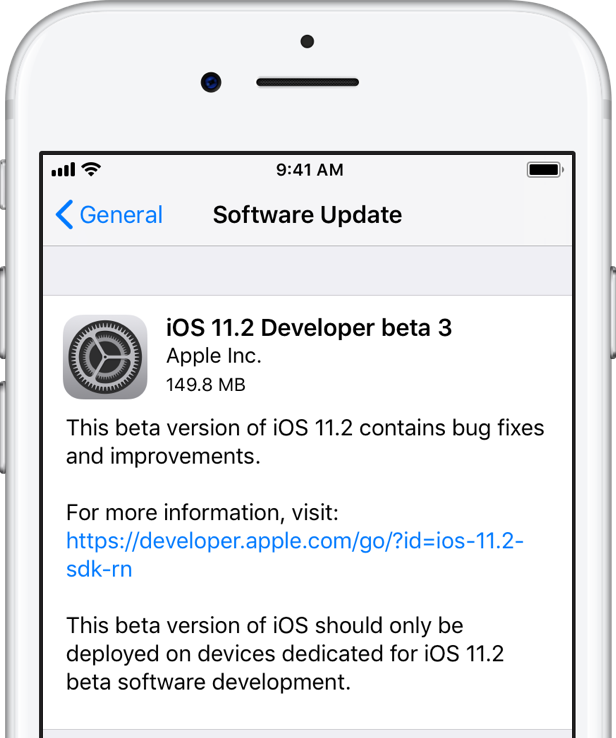 iOS 11.2 beta 3 (build 15C5107a) can be deployed on iPhone, iPad and iPod touch devices with a prior beta and an appropriate Apple configuration profile installed (available in Dev Center) through the Software Update mechanism in Settings.

Second iOS 11.2 beta was seeded to developers and public beta testers last week, featuring Apple Pay Cash, which you can see demonstrated in Andrew’s video above.

Apple Pay Cash is supported by watchOS 4.2, too.

iOS 11.2 will also feature SiriKit for HomePod and may include overdue support for AirPlay 2 and introductory pricing option for subscription apps on iOS and macOS.

Developers will be able to offer new customers a discounted introductory price for their auto-renewable subscriptions on App Store, with the ability to configure introductory pricing on their In-App Purchase page in iTunes Connect going live “soon.”

watchOS 4.2 beta 3 (build 15S5100a) can be downloaded and installed on your watch through the Software Update mechanism in the companion Watch app on your paired iPhone. Your watch must have at lest 50% percent power and be connected to its charging disk in order for the software update to appear.

tvOS 11 beta 3 (build 15K5099a) is available for the fourth-generation Apple TV and Apple TV 4K through the Software Update mechanism in Settings. Your Apple TV must have an appropriate Apple configuration profile installed for the update to show up.

tvOS 11.2 is a bug-fix update without new features sans a pair of new options for automatic frame rate and dynamic range switching for 4K and HDR content on your Apple TV 4K.

Other improvements in tvOS 11.2 include automatic use of region during setup or region change to suggest refresh rate of 50Hz or 60Hz and a comeback of the Unwatched category in Home Sharing for Movies, TV Shows and Home Videos.

We’re installing the new betas on our devices and will report back if we discover any noteworthy changes. You can also report your own discoveries by shooting us an email at tips@iDownloadBlog.com or reach out to @iDownloadBlog on Twitter.