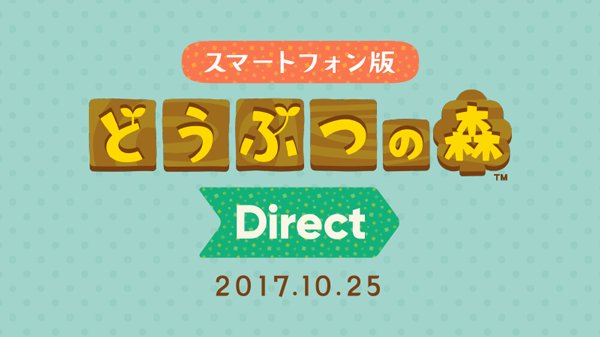 Gaming giant Nintendo announced via its Japanese Twitter account this morning that it will be hosting a fifteen-minute Direct event for its upcoming mobile Animal Crossing game.

The event will take place this Wednesday, October 25 at 12pm local time in Japan, which works out to Thursday, October 24 at 8pm PT in the United States.

According to its Japanese website, no information on Nintendo 3DS or Nintendo Switch versions of Animal Crossing will be shared at the event.

Originally scheduled to arrive in the first quarter of 2017, the mobile version of Animal Crossing was delayed due to the launch of Fire Emblem Heroes and Super Mario Run, the first two mobile games released as part of Nintendo’s partnership with DeNA.

Animal Crossing for iOS will be a port of the original game for dedicated Nintendo consoles. For the uninitiated, Animal Crossing is a cluster of community simulation games with an open-ended storyline set in a village of talking animals.

The company could also release a smartphone version of The Legend of Zelda at some point.