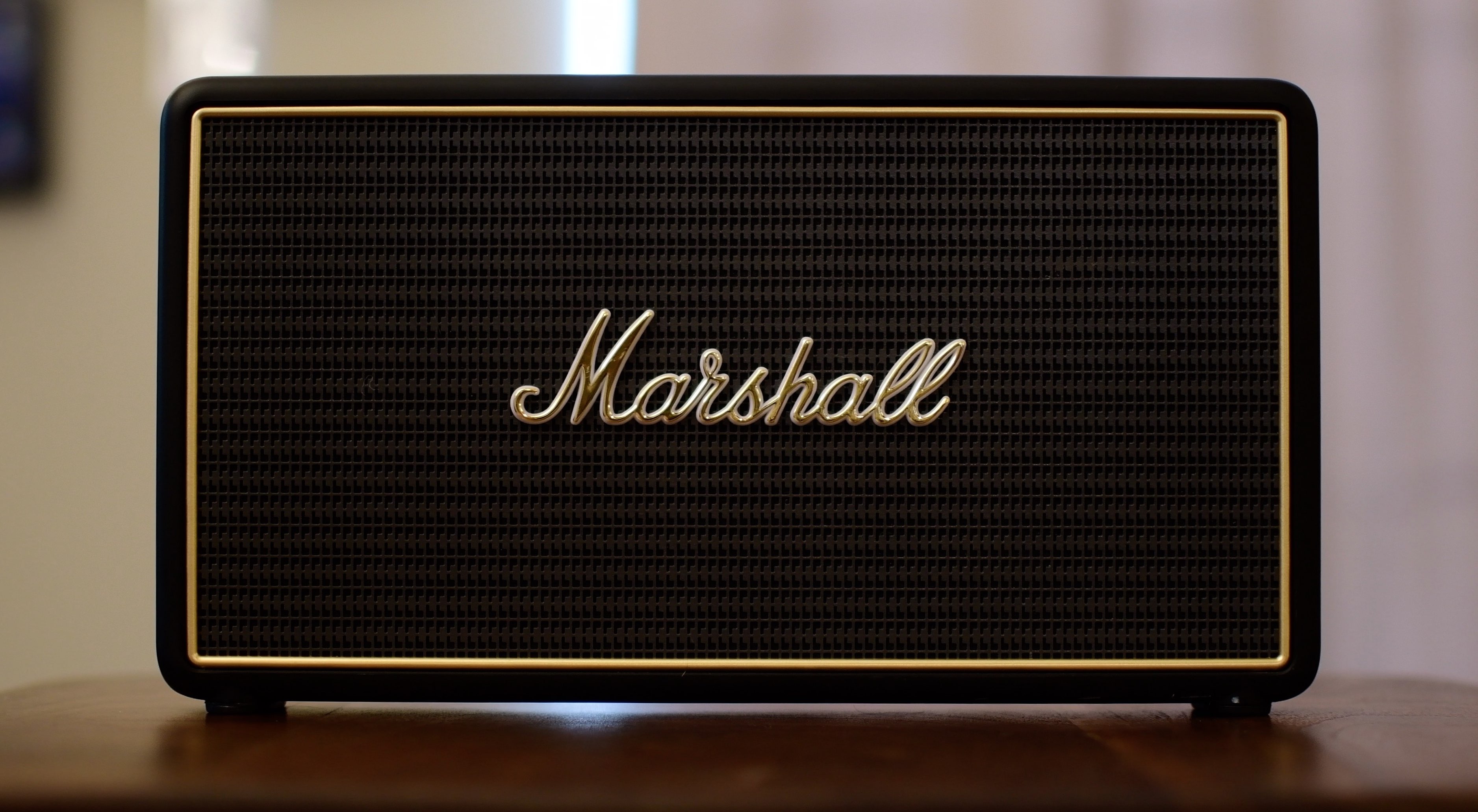 Marshall, a company known for its outstanding history in vintage guitar amps, entered the consumer market a few years ago with a series of speakers and headphones. The Stockwell, the smallest in their lineup, has stood out as probably my favorite portable Bluetooth speaker to hit the market in several years.

I’ve got something of an affinity towards Bluetooth speakers. I think they are one of the most ubiquitous products that nearly everyone has. Yet, I still haven’t been able to touch upon one that I really felt was what I was looking for.

Marshall really has a fine attention for detail that I haven’t seen in this space in the past. Though I’ve tested dozens of Bluetooth speakers, Marshall has come closest to getting everything right.

Obviously, the Stockwell is a Bluetooth speaker. In Marshall’s lineup of wired and wireless models, the Stockwell is the smallest of the group. That means it is also the quietest, though I don’t think anyone would call it quiet.

In fact, it can put out an impressive 90db, which is one of the loudest in its size range. The sound is because of what is inside the speaker. Namely two 2.25-inch woofers and a two-channel Class D amplifier.

On the exterior, the speaker sports Marshall’s iconic look with their recognizable logo emblazoned across the speaker grill that occupies the entirety of the front. The top of the unit is ripe with controls—frequent fliers like power, Bluetooth, input and volume. Then others that are seldom seen, but that are handy, like bass and treble.

The buttons and knobs along the top are the nicest I’ve seen on a speaker. They aren’t rubberized nubs that lack feedback and tactility. The knobs are metal, have diamond-pattern knurling and actually recede into the speaker itself. Press down and they spring up and allow you to adjust them. Press again to hide them inside the body for travel. It also prevents them from getting accidentally adjusted on you.

The whole top is a super elegant gold color to match the Marshall logo. I’ll be the first to admit I hate the color gold, but it just works in this application.

The sublime build quality is not limited to just the buttons of the speaker.

You can see it come across in the aux cord and cover as well. The aux cord is included and has all the hallmarks of a premium cable. The ends are metal (and, of course, gold). They even have springs on the them, which helps reduce the pressure when bending the cables and protects them from damage. The cover, which is an “optional” accessory, is vinyl on the outside and a plush velvet on the inside. I put optional in quotes because technically you can buy it without it, but they are currently the same price on Amazon. So… just get it with the cover.

The battery inside the speaker is great, though not the longest we’ve ever seen. It will get you easily 25 hours of playback and I can verify I’ve seen actually a little bit more than that if I’m not pushing everything to its limits. Since you have all that great battery life inside of there, why not put it to use?

On the back is a USB port which you can use to charge your device on the go. It is exceptionally handy and something I wish other speaker manufacturers would implement.

Like many other Bluetooth speakers on the market, you can use this for calls as well. If a call comes in while you are connected, you can hit the phone button to answer and chat right through the speaker. Tap it again to end the call and continue jamming. 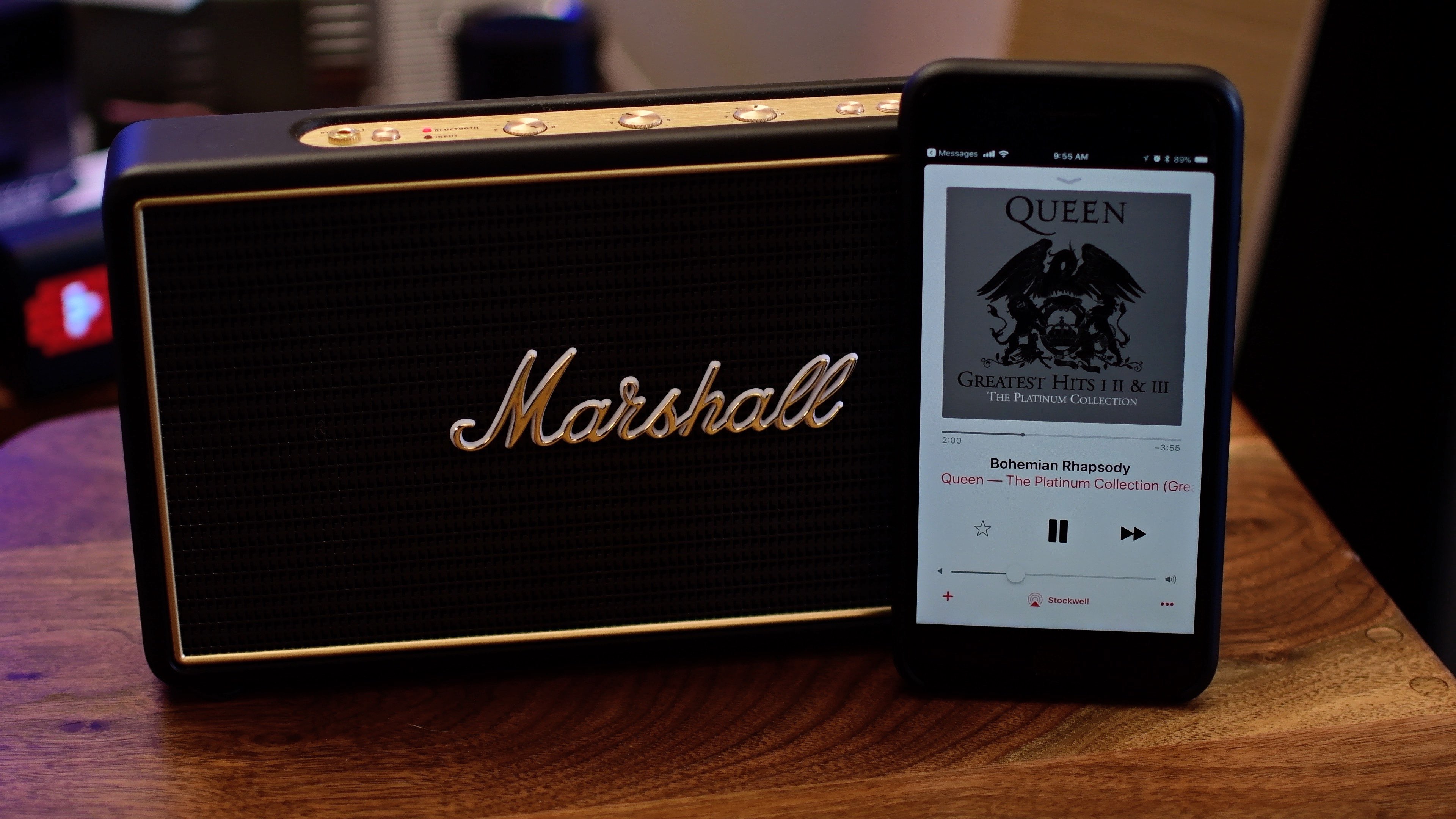 You have two different inputs for this speaker, starting with the included aux cable and ending with Bluetooth. Marshall really spent time on the Bluetooth piece of the equation. To start, the range is far above average. I was able to keep connected far past where other speakers would normally drop off. Plus, they’ve opted for Bluetooth 4.0 and included support for aptX, an audio coding algorithm put out by Qualcomm.

It’s only included on high-end speakers and headphones, and aims to drastically increase the audio quality when streamed over Bluetooth. Basically, it allows for nearly imperceptible difference when streaming vs wired. That is a significant thing to accomplish because many Bluetooth speakers suffer from degraded audio quality.

You also can’t just claim to support aptX. Similar to Apple’s MFi program, manufacturers must submit their products to Qualcomm to verify that their product meets the high standards of aptX.

How does it sound?

All of that leads to sound, arguably the most important aspect of a speaker.

Personally, I feel audio quality can be a bit subjective. It also highly depends on the type of music you listen to. I tend to listen to a lot of 90’s, classic rock and instrumental. Some pop music from today, but generally no rap or hip-hop. All of the genres I lean towards are well represented by the Stockwell.

aptX does a great job of keeping up audio quality (though iPhone doesn’t support aptX). 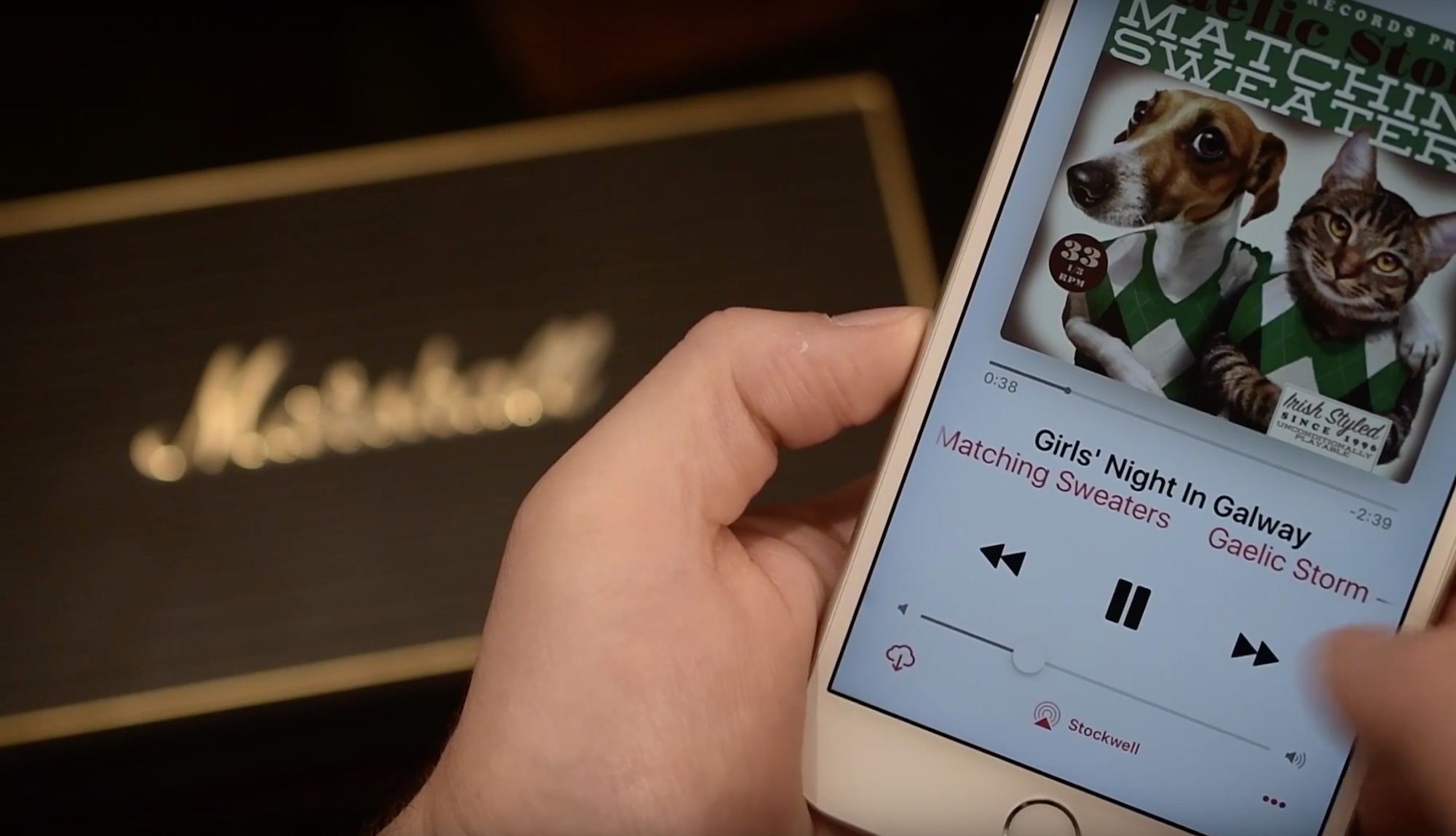 There is no ambient hiss that is frequently seen from cheaper speakers. I appreciate the fact that when you turn the speaker down to 0 volume it actually mutes the speaker. Too many speakers we’ve reviewed just go very low when turned down all the way instead of muting. This is how a speaker should operate.

On the high end of things, the audio keeps from degrading until you get almost to the top. I was able to turn the Stockwell up to 100 percent and my iPhone up to just above 80 percent before I heard any deterioration in the sound quality.

In my real life testing, I’ve found that it was a great speaker for smaller parties. As many as 12-15 people could hang around talking with the music still being at good volume. I was also able to put it downstairs in the living room, stream content from my Apple TV, run upstairs and still hear the music cranking without a problem. It was even great outdoors although that’s a different beast—if you have large swaths of area to cover in audio, you’ll need something beefier. 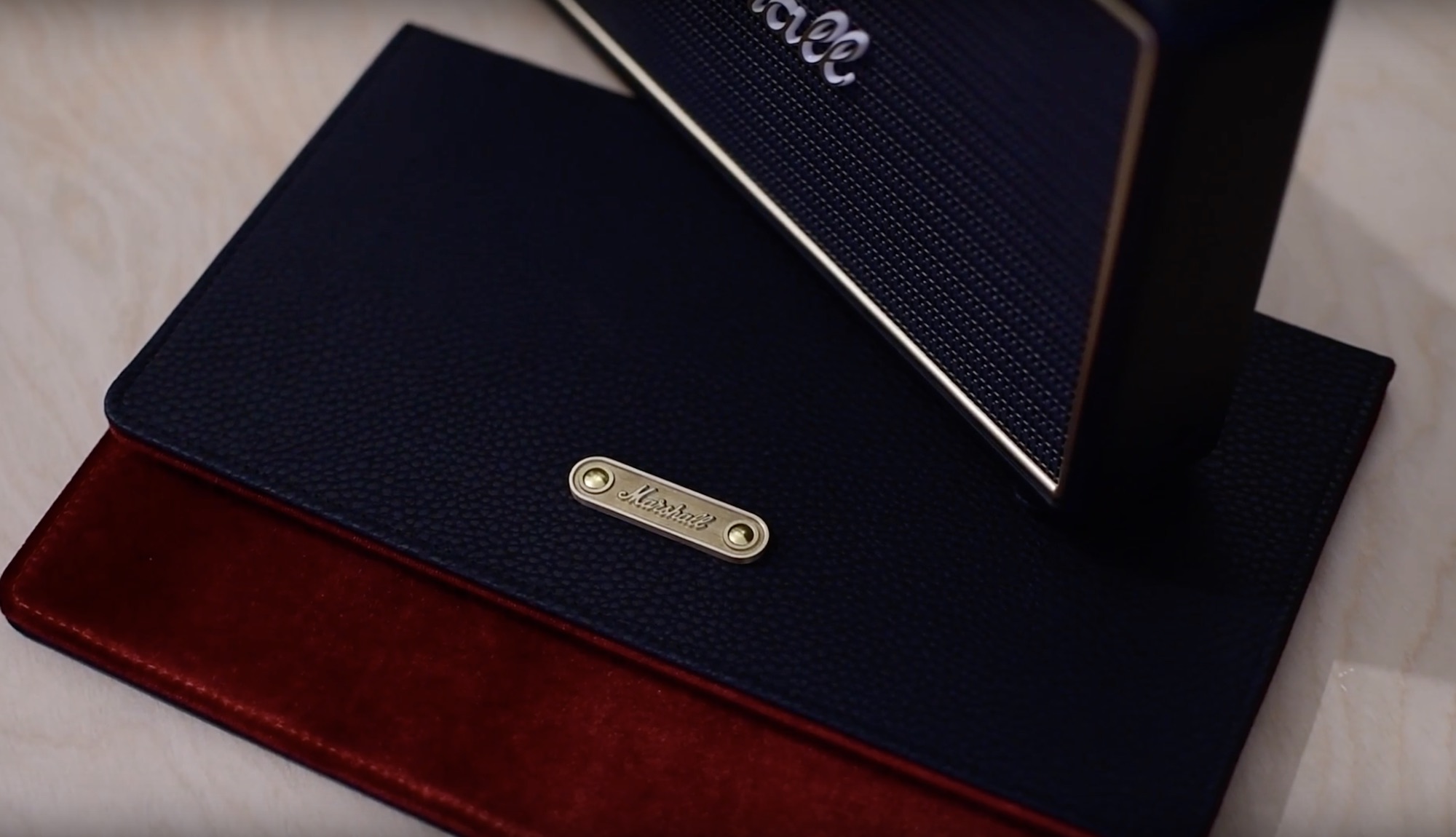 In listening to a large variety of music from several genres, I’ve found it to be most accurate in anything with instrumentals. That’s going to be rock, jazz, metal, classical, etc. It did quite well with pop music (whether from the 90’s or today) as well. Highs were pristine, with female vocals being an exceptional standout. High hats, cymbals and snares all were crisp, tight and accurate.

Mids were on point, too. Brass shines through fantastically, though they all were bright and energetic. Guitars and backing tracks all held their own, with very little muddling of the more delicate notes. I’d say the midrange is strongest and sometimes overpowering the lows.

On the low end, this was where the most mild of disappointments came in.

It isn’t that the bass is bad, it can just be lacking at times. A lot of that just comes from the size of the speaker, which isn’t entirely the Stockwell’s fault. What was produced from the Stockwell was entirely accurate and a pleasure to hear. You can easily differentiate the notes on the bass, the backing track or the drums. This is where I can easily see people more interested in bass-heavy party/rap music would be let down.

If you are someone who is interested in finding a great looking unique speaker with some great sound, this a great option. If you are looking for the absolute best sound, there will admittedly be others out there (though more expensive) that can fill that niche. It also is reliant on how important looks are vs sound.

Most importantly, if you love classic rock, vinyl, jazz, etc, you will probably love this speaker. Obviously it has the look of a vintage amp with one of the most recognizable company names, but it also has a sound tailor-made for that genre.

If we break down everything above into a condensed list, we have an overwhelming list of pros and a few minor cons.

In my personal path to finding the ultimate portable Bluetooth speaker, I had quite a list of features. Size, audio quality, battery life and some good aesthetics. What I didn’t expect was that the Stockwell would meet all of this criteria, and them some. I was charmed by its retro vibe and couldn’t be happier with the performance.

I’m not a huge bass-heavy listener or into rap, so these shortcomings were immediately forgiven. I couldn’t recommend the Marshall Stockwell enough as it makes me just more eager to investigate the rest of Marshall’s Bluetooth speaker lineup. You can find it on Amazon, currently on sale for less than $200, which is a great bargain.

And what’s your favorite portable speaker?

Sound off in the comments below!