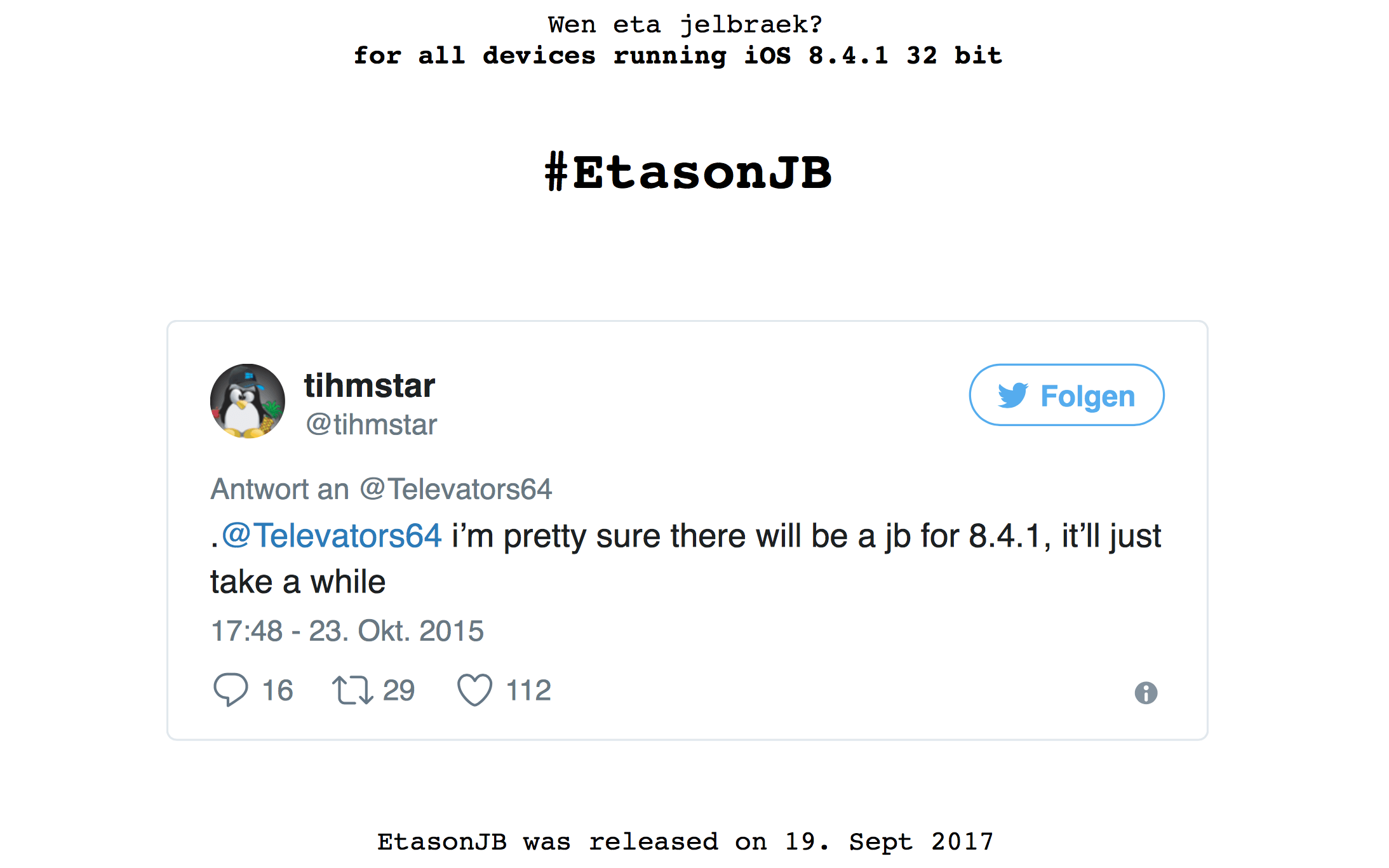 It seems the joint creator of the iOS 9.3.5 Phœnix jailbreak has been busy filling up the remaining gaps in the jailbroken firmware listings. Following up on the Phœnix tool and an untether for the iOS 9.1-9.3.4 Home Depot jailbreak, tihmstar released an untethered 32-bit jailbreak for iOS 8.4.1 about a week ago. We refrained from recommending the initial release as it had a few issues, but it now seems ready for general consumption.

It is an untethered jailbreak for 32-bit devices on iOS 8.4.1. 64-bit (iPhone 5s and newer) are not supported, nor are any other firmwares.

Why should I care?

Although many of our readers no longer have 32-bit devices, and are looking for an iOS 10 or 11 jailbreak for 64-bits only, there are several reasons why this release is still good news.

Older devices may not run well on iOS 9 or 10, making iOS 8.4.1 the most recent, most secure iOS version which they can run smoothly until the end of their life.

iOS 8.4.1 can be downgraded to without blobs on some devices, meaning users on other firmwares may be able to get there without saved blobs, a unique situation. Before this tool, getting to iOS 8.4.1 was useless as you couldn’t jailbreak once there, but now you can. This means that like the iOS 9.3.5 jailbreak, users forced to restore can simply downgrade again to iOS 8.4.1 and re-jailbreak, giving them a safety net in some cases.

The fact that developers are still honing their skills in writing exploits and wrapping up jailbreak tools bodes well for future jailbreaks. 32-bit jailbreaks are well documented, and borrow techniques from each other. Tihmstar and others have used this fact to create tools and learn at the same time, giving them a springboard from which they may be able to move to new jailbreaks. Whilst we cannot count on this, it’s good to know that there are people learning the tricks of the trade.

The initial release had a problem with bad kernelpatches interfering with installd. This resulted in a uicache problem in which icons could disappear from the home screen. This has now been rectified. A separate issue caused the jailbreak exploit to fail on the iPhone 5, but this has also been pinpointed; a fix will be pushed out soon. Some other users have reported that the jailbreak itself succeeds but the untether fails on their device, though these reports are fewer and may be related to the issue mentioned above. At this point, it seems that the tool is fairly stable and can be tested by the average user. Back up your device, exercise common sense in what you install, and refer to tihmstar’s Twitter before deleting or uninstalling anything if you encounter problems; he will post any further workarounds, fixes, or known issues there.

Who can use this?

All 32-bit device users on iOS 8.4.1 can use this tool. Additionally, jailbroken users on other firmwares, such as iOS 6-9, may be able to move to iOS 8.4.1 without blobs using OdysseusOTA2, if there is a bundle available for your device/firmware.

There is a video documenting the process for any interested parties. If your device did not get iOS 10 but you aren’t currently on a jailbroken firmware, you could restore to iOS 9.3.5, jailbreak, and then downgrade to iOS 8.4.1 using the process above.

Where can I get it?

The jailbreak tool can be downloaded from the official EtasonJB website. Do not re-host the .ipa file, link to the original page instead. The jailbreak app must be side-loaded with Cydia Impactor, and then run on-device, as detailed in the release video. Once jailbroken, add tihmstar’s repo to receive updates to the untether package:

That about wraps it up. There was some controversy about the release of the jailbreak after fellow developer jk9357 released a similar tool, along with claims that tihmstar’s jailbreak used many of the techniques and patches from his own Home Depot jailbreak. It seems the two have graciously buried the hatchet however, with each acknowledging the other’s contributions, and with clearer credit being giving to jk9357 on the Phœnix website going forward.

Let me know your experiences with downgrading to iOS 8.4.1, as well as with jailbreaking with EtasonJB. I’d be interested to know how the tool runs on this somewhat legacy firmware.