Hulu is a great app for watching your favorite movies and TV shows on demand, but like most services, it supports advertisements; even if you’re paying for the reduced-cost monthly bargain plan.

Enter a new free jailbreak tweak called Huu for Hulu by iOS developer WhiteSauce, which gives users more power over their advertisements from the Hulu app. Huu for Hulu doesn’t skip ads entirely, but it does let users scrub past them when needed.

If you’re in a scenario where perhaps you’re scrambling to finish a TV episode during your lunch hour, or you need to finish watching your show in a pinch for other reasons, then Huu for Hulu lets you finish in record time without having to sit through time-wasting incremental ads.

The tweak also includes under-the-hood mechanisms to prevent Hulu from detecting your jailbreak in any way. With that in mind, if you’re worried about the app catching onto your ways and preventing you from watching your content, then the tweak has you covered.

Huu for Hulu adds a preference pane to the Settings app where you can configure the tweak: 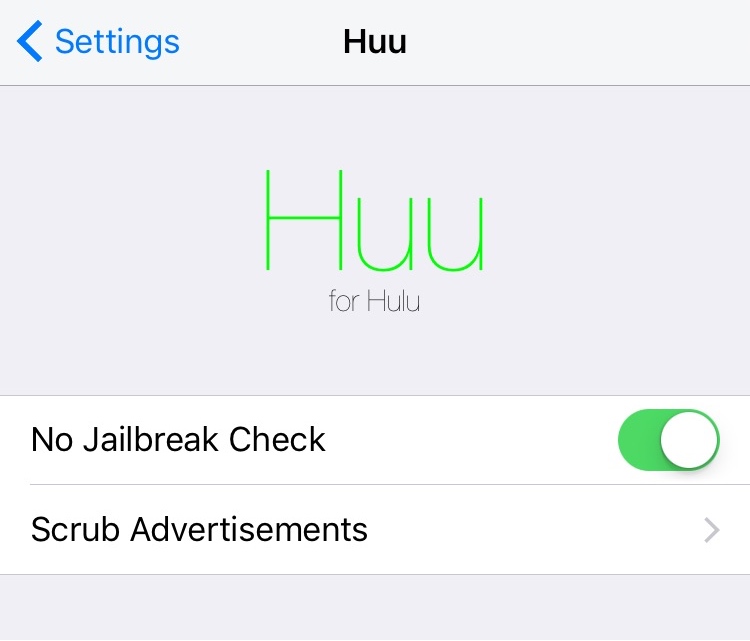 Here, you’ll find a toggle switch to toggle the tweak’s jailbreak check protection on demand. There are no options for scrubbing advertisements; although there’s a cell for it, tapping on it won’t take you anywhere as this feature is always turned on by default.

Because we’re an ad-driven site ourselves and we understand the importance of ads, it’s a nice touch that the tweak only empowers the user with ad-scrubbing abilities rather than blocking them entirely. This means you could continue watching ads as you normally would unless you had a legitimate reason not to.

If you’re interested in trying Huu for Hulu, you can download it for free from Cydia’s BigBoss repository. The tweak works on all jailbroken iOS 10 devices and supports version 5.7 of the Hulu app, which is a free download from the App Store (subscription required).

Does Huu for Hulu sound like a good idea to you? Share why or why not in the comments below.