To help developers prepare for the arrival of iOS 11 and ARKit, Apple has made a demo application available to download and check out. If you have the prerequisites, it is actually very easy to get up and going with ARKit to try it out for yourself.

We will walk you through how to install the demo app, how the app works, and what some popular developers are creating for the launch of iOS. You can also check out our video for a quick demo as well.

Continue reading for the step-by-step instructions detailing the process of installing Apple’s demo app with ARKit on your iOS device. Keep in mind that ARKit requires the A9 chip or later, meaning devices older than 2015’s iPhone 6s are unsupported.

To try the ARKit demo app for yourself, you need a few things.

Once you have these, you are good to go. To get started, open the folder you downloaded named “Placing Objects” that contains the sample Xcode project. Right click and hit open on ARKitExample.xcodeproj to launch the project. You may get a warning that this is a project downloaded from the internet. Simply hit “Open” to continue. 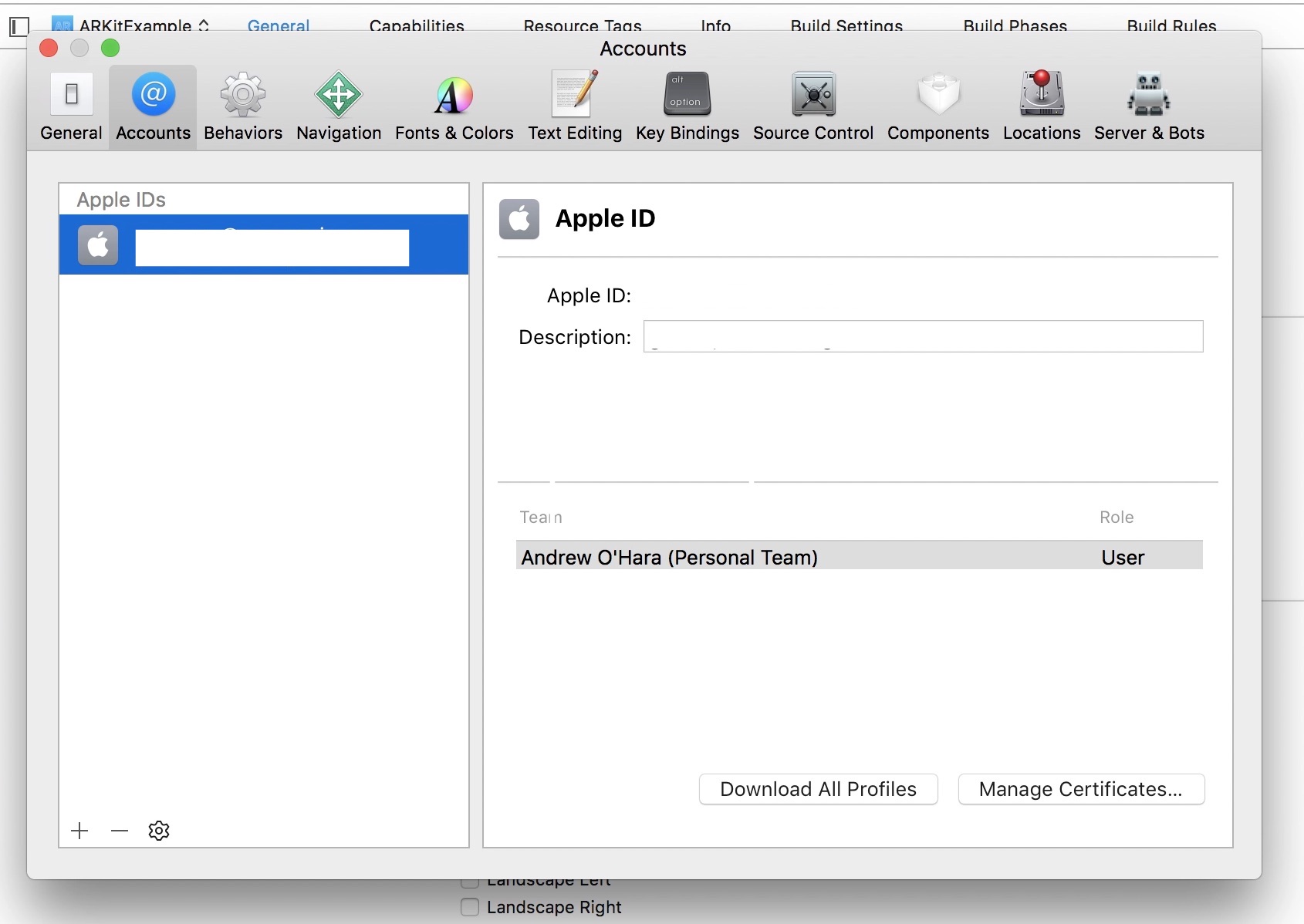 If this is your first time launching Xcode, you may need to sign into your developer account. Click on “Xcode” in the menu bar, then “Preferences”. On the second tab, titled “Accounts”, enter your developer credentials.

Now select the project on the left hand side bar that has the blueprint icon to the left of “ARKitExample”. Now update the signing team to your team in the center.

Once you’ve made that small change, you can go ahead, plug in your iPhone, and hit run in the top left hand corner. The first time it may take a few minutes before running, but once it runs, you can disconnect from your Mac and use the app anytime.

Once you have the app up and running, you can immediately start placing objects. Obviously, the app is dead simple. It is just meant as a tool for developers to get the feet wet in developing their own applications using the framework. The app only has a few simple aspects. A plus button at the bottom to add one of several objects, a toggle switch in the bottom right to alter a couple settings, and a refresh button in the top right to start over and clear your canvas. 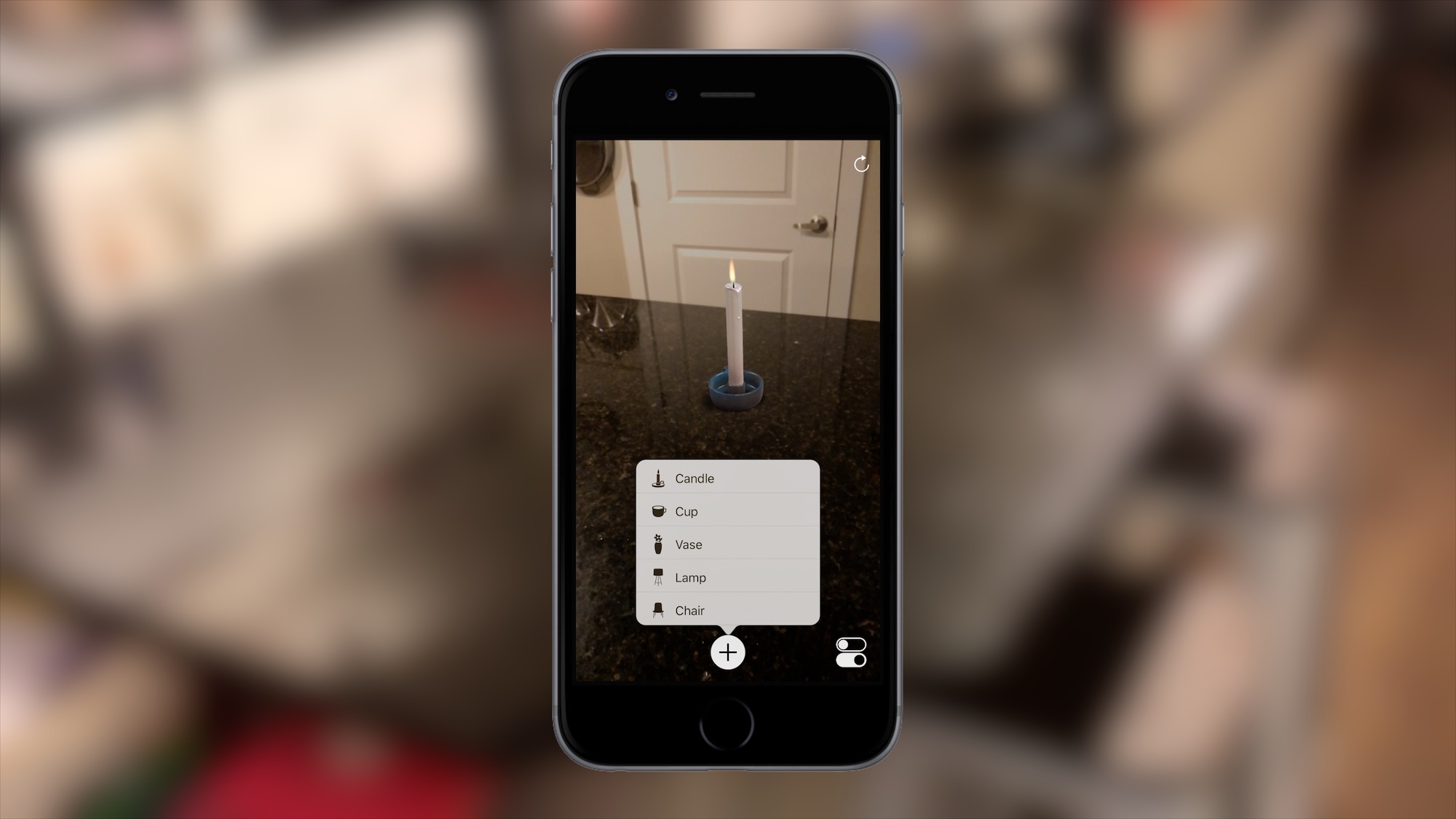 You can choose between a candle, a cup, a chair, a vase, and a lamp to place onto your environment. It’s really amazing how the app will automatically detect surfaces and scale the objects based on its surroundings. It isn’t always perfect, but it does a really good job at this.

Once an object is on the screen, you can rotate and move it around by dragging. Feel free to add as many more objects as you’d like. It can handle several at once, and track all their locations in real time.

One thing that I thought was very impressive was the ability to get up close to the 3D objects. You can literally look inside the top of the flower in the vase by moving your phone towards where the flower would be in real life.

Apple recently showed off several new ARKit apps that will be debuting after the launch of iOS 11. Some of the really creative ones included the popular children’s book The Very Hungry Caterpillar, a Pokémon Go-esque game but with zombies from the Walking Dead, and a furniture shopping app from Ikea. Many have shared videos of their upcoming apps.

ARKit is seemingly going to be huge. With a simple update, AR will now be in the hands of hundreds of millions of users. Developers seem to be embracing it very quickly, and iOS 11 isn’t even released yet. As time goes on, we are certain to see more and more practical applications. Even Google is feeling the pressure!

Previously, Google launched project Tango, an AR platform that required special hardware to run. Device support was limited, as was the offering of apps. To counter Apple’s push into the arena, they launched a new Android framework dubbed ARCore, which aims to do the same thing as ARKit, but on Android devices. It will be launching soon and support the Pixel and the Galaxy S8, but many more by the end of their preview cycle.

ARKit is showing a lot of promise, though it currently has a few compromises. For instance, it can’t yet detect non-flat surfaces. For instance, placing virtual cushions on your couch won’t be possible out of the gate. Walls are also undetectable. Which means that you can’t hang photos or TVs on your wall inside of ARKit.

A surprising aspect as well was the need for only a single camera. Many expected the iPhone 7 Plus to outperform the one-camera brethren. It’s most likely because Apple would like the widest array of people to be able to use it, and not require them to use two cameras, though it would increase its depth sensing ability.

I’m honestly thrilled to see what devs come up with, but I want to hear your opinions too. Are you excited for ARKit? If you are, what are your favorite utilities for it? Is it 3D sculpting? Shopping for clothes or furniture? Or something else? Let us know below in the comments.