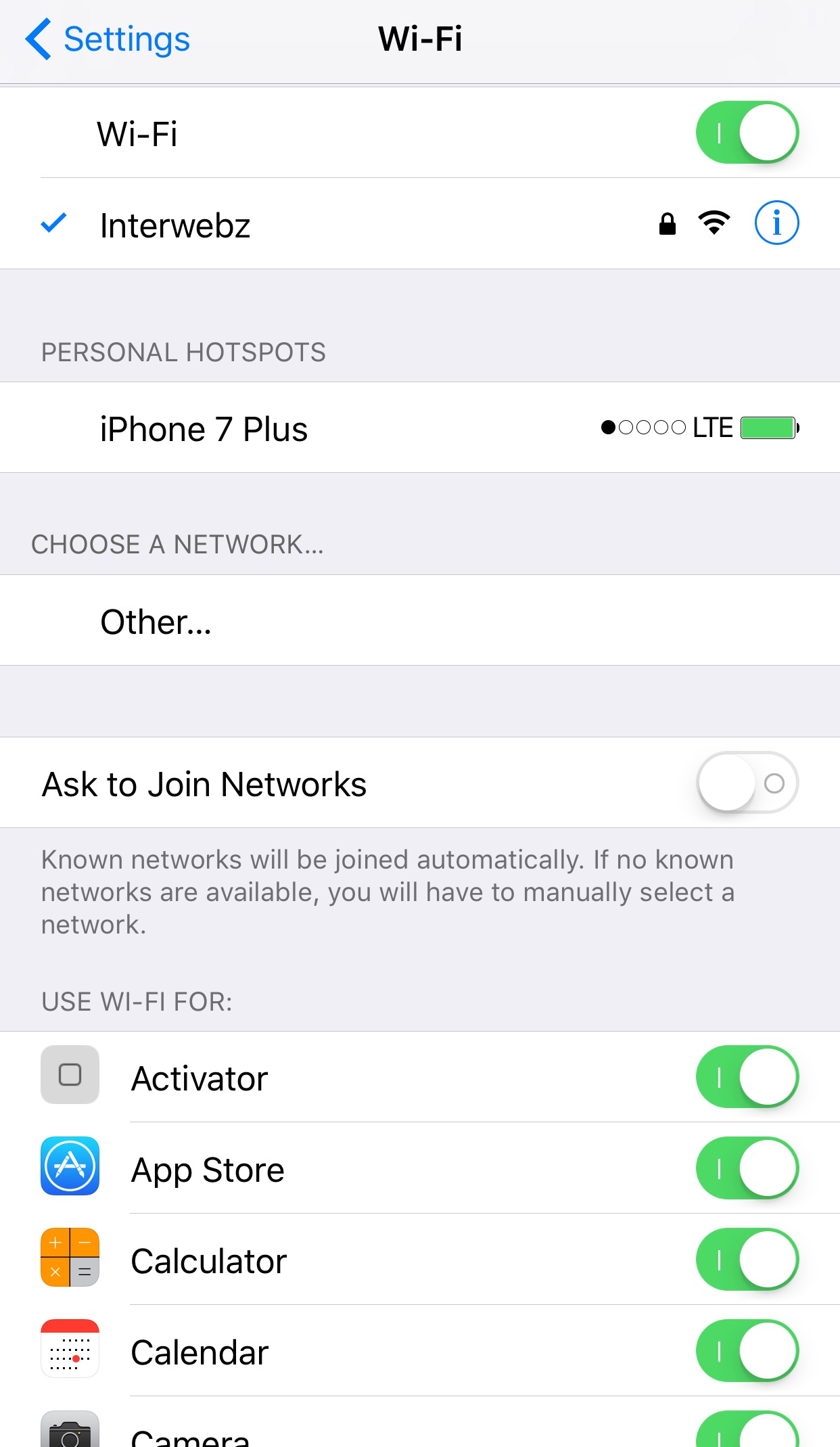 iOS lets you restrict apps from using cellular data, so it only makes sense to let users do the same with Wi-Fi networks. Although cellular data is more prone to being limited by caps and speed reductions, Wi-Fi networks can sometimes cause issues with apps because of how they’re configured or raise security concerns.

By installing a new jailbreak tweak called ConditionalWiFi2 (iOS 10) by iOS developer Creatix, you can choose what apps can connect to the internet over a Wi-Fi connection.

The concept should sound familiar because it’s actually an iOS 10 refresh of the first tweak that debuted last year. Once installed, a new list of switches gets added to the stock Wi-Fi preferences pane, as shown above.

Toggle switches appear next to every app you have installed on your device so you can pick with a fine-toothed comb which apps can access the internet via Wi-Fi and which ones cannot.

One thing worth noting, however, is that when you disable Wi-Fi connectivity for a particular app, it will not fall back on cellular data to establish an internet connection. If you’re connected to a Wi-Fi network and you start seeing errors in one of your toggled apps, the fix is to disable Wi-Fi and use cellular data until you’re finished using that app.

There is a handful of niche uses for this tweak, such as preventing the Facebook app from tracking you and preventing your banking information from being passed along on unsecured Wi-Fi networks when your device unknowingly connects to one. Naturally, not everyone falls into these categories.

Those who stay at home on their own Wi-Fi networks all day long are unlikely to find ConditionalWiFi2 useful, whereas someone who’s at work or school all day and jumps from network to network may need to be more mindful about Wi-Fi networks and could have a use for this tweak.

Indeed the tweak can be polarizing, but it really comes down to how you use your device. Everyone’s mileage may vary, so I can’t recommend the tweak for everybody.

If you want to try ConditionalWiFi2 (iOS 10), you can grab it for $0.99 from Cydia’s BigBoss repository. Even if you do own the previous version of ConditionalWiFi, you will have to purchase ConditionalWiFi2 separately. The tweak works on all jailbroken iOS 10 devices.

Do you have a reason to prevent certain iOS apps from connecting to the internet over a Wi-Fi network? Share why or why not in the comments section below.