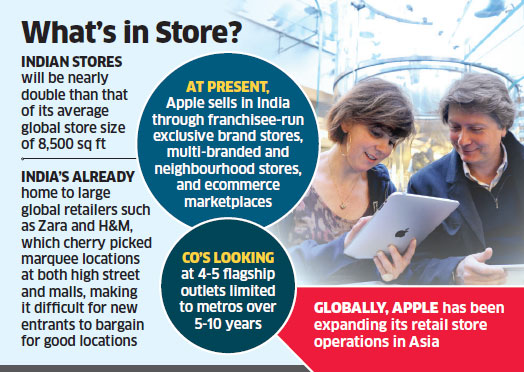 After kicking off local iPhone SE production in Wistron’s manufacturing facility on the outskirts of Bengaluru, Apple is now planning to build its largest global retail store ever for India.

When finished, the outlet will be massive: 7-10 times larger than that of rival Samsung, covering between 10,000 and 15,000 square feet of retail space, or roughly double the size of its other global stores, The Economic Times of India reported yesterday.

In terms of raw footage, it’s going to be Apple’s largest global store to date. By comparison, the average global Apple Store size is about 8,500 square feet.

While the store may not open before 2020 because Apple is yet to receive approval from the government for its retail foreign direct investment plans, two industry executives said the firm would open other stores at prime locations either in a mall or high street, some of which could resemble the flagship Fifth Avenue store in New York City.

Apple Stores in India will be limited in number, the executives said. The company is looking at 4-5 flagship outlets limited to metros over 5-10 years. This is due to the fact that each store requires huge space to suit its architectural design, which makes them a retail destination in itself attracting even tourists.

Discussing the upcoming flagship store, one of the sources said:

Apple wants to initially set up two stores, one in New Delhi and second one in Mumbai, said one of the executives. They want the stores to be truly iconic right from the design to the location. However, getting desired space will take time since 10,000-15,000 square feet of prime location is not readily available.

At this size, It will be the biggest single-brand electronic stores in India.

The article states that Apple’s retail team visited India last month to meet realtors and mall managers, understand the retail market, see potential sites and lay down specifications to the India team and real estate consultants. They reportedly signed non-disclosure agreement with various stakeholders regarding the store plans for 2020-2021.

The development marks a major change for the Cupertino tech giant given it currently sells iPhones through franchisee-run exclusive brand stores, multi-branded and neighbourhood stores and ecommerce marketplaces.

The same publication had earlier reported that the iPhone maker may initially start an online-only store in India by this year, which won’t require an approval since the government allows companies to directly sell online locally manufactured goods.

Recently, Apple committed to running its Indian operations 100 percent from renewable energy by the end of this year.