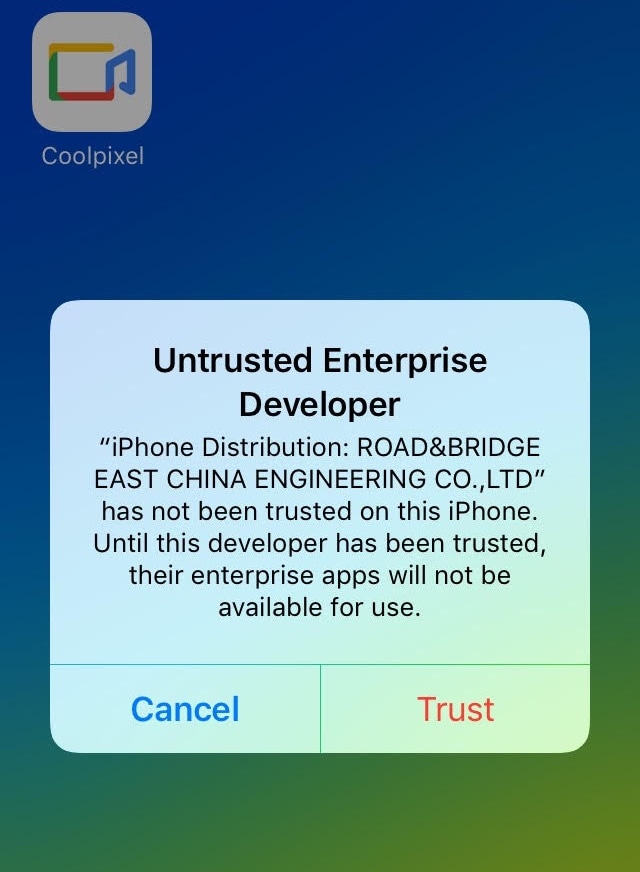 Depending on how advanced of an iOS user you are, you may sideload apps from time to time.

In many circumstances, sideloading third-party apps via Impactor or Xcode involves trusting a certificate – a process you should be familiar with if you’ve jailbroken with Yalu102 or Pangu for iOS 9 – but iOS doesn’t make the trusting process easy or straightforward out of the box.

Here to fix that problem is a new free jailbreak tweak called QuickTrust by iOS developer 1GamerDev, which adds a “Trust” button directly to the certificate pop-up alert, as shown above.

The tweak doesn’t automatically trust certificates, as this would be a huge security concern. Instead, it just makes the process easier for you, the end user, to trust a certificate without jumping through hoops.

Before installing QuickTrust, an alert like the one above would normally only have a “Cancel” button. You would then have to navigate through a labyrinth of preferences panes in the Settings app before stumbling upon the certificate and trusting it from there.

With the Trust button now being integrated right into the alert message itself, trusting certificates for your sideloaded apps is never more than a tap away and you don’t have to open the Settings app at all.

The tweak only works when your device is in a jailbroken state because it’s dependent on Cydia Substrate, so the tweak isn’t intended for use with the Pangu or Yalu jailbreak apps and won’t be useful in these situations since you aren’t jailbroken when you install them initially.

Instead, it’s intended more-so for third-party services you can use that would never be allowed on the App Store because of Apple’s strict rule enforcement. To name a few, some of the services that need to be sideloaded are: AeroTV, CoolPixel, and TuTuHelper.

QuickTrust doesn’t have any options to configure, so its effects will be apparent the very next time you sideload a new app with a certificate that needs to be trusted.

If you want to try using QuickTrust, it’s available to download for free from Cydia’s BigBoss repository. The tweak works on all jailbroken iOS 10 devices.

Do you think QuickTrust will make life easier for sideloading apps onto your jailbroken iPhone or iPad? Share in the comments section below.