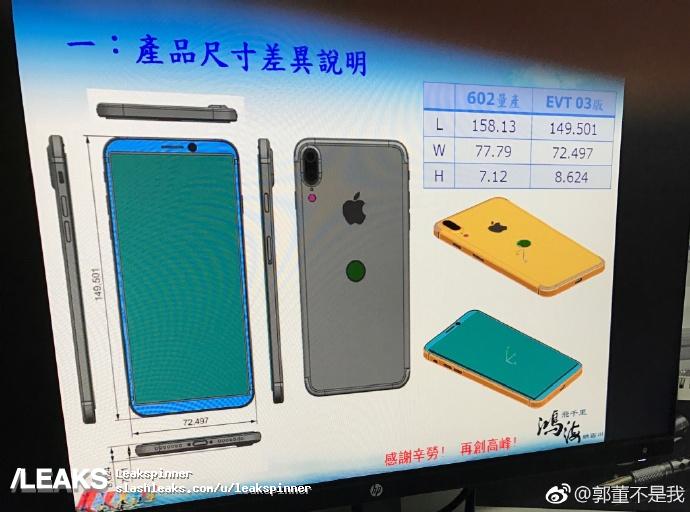 The leaked technical schematic depicts a device as thin as iPhone 7 with very slim bezels on the left and right sides of the screen, significantly smaller top and bottom bezels, a fingerprint sensor relocated to the backside, a vertically aligned dual-camera system and more.

As you can see for yourself, the schematic shows a redesigned dual-camera system on the back, which is now vertically stacked in the top-left corner. That gap below the Apple logo is apparently a relocated Touch ID sensor. The device appears to pack a larger screen than iPhone 7 in a body that’s comparable to a 4.7-inch iPhone.

As per the drawing, iPhone 8’s dimensions would measure against iPhone 7 as follows:

The redesigned camera still protrudes from the back.

Including the dual-camera thickness, iPhone 8 might be 8.6mm thick although that could be due to the rumored all-glass design and a stainless steel frame as well.

Lastly, the drawing shows the usual set of hardware buttons and features on the sides of the device, like the volume toggles, mute switch, lock button, SIM card tray, Lightning connector and no 3.5 mm headphone jack.

Apple is thought to be testing as many as ten different iPhone prototypes this year and this could be one of its fallback designs in case integrating Touch ID into the display assembly proves technically unfeasible to pull off.

At any rate, please treat this rumor with a grain of salt as we have not yet seen any actual parts that would corroborate the leaked schematic.

Some analysts cautioned that Apple’s efforts to integrate a fingerprint sensor directly into the display assembly may not be going well, saying that an in-screen Touch ID is actually causing the company the most trouble. Many Android handsets feature a rear fingerprint reader that requires users to put their finger in the right place.

While Apple is unlikely to make the experience worse for users by relocating Touch ID from the front of the device to its back, the company may be left with no other choice assuming stories about an in-screen fingerprint reader being iPhone 8’s biggest bottleneck are accurate.