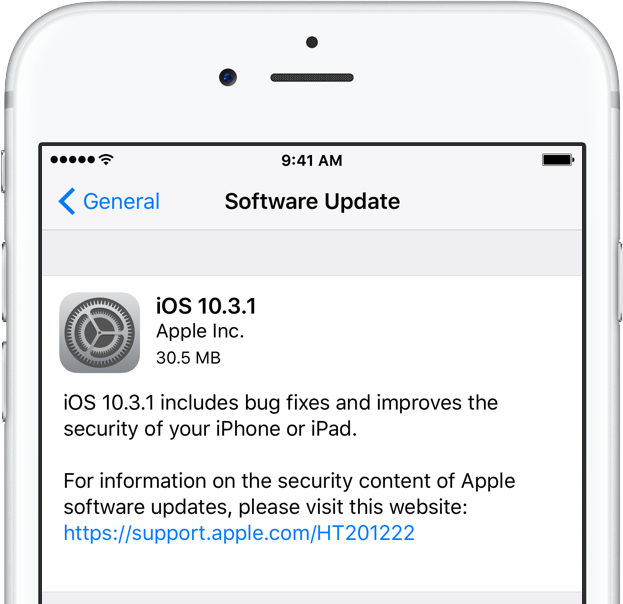 Apple on Monday issued a minor update to iOS 10.3, which released on March 27, 2017. The new iOS 10.3.1 software update comes with a build number of 14E304 and is recommended for all users. According to release notes accompanying the download, iOS 10.3.1 includes bug fixes and improves the security of your iPhone, iPad or iPod touch. The software update can be downloaded over-the-air via Settings → General → Software Update on your iOS device.

Aside from bug fixes, iOS 10.3.1 brings back support for 32-bit devices like iPhone 5 and iPhone 5c. Apple’s security document sheds more light on bug fixes, acknowledging that iOS 10.3.1 patches a bug that could let an attacker within range to execute arbitrary code on your device’s Wi-Fi chip.

To fix the Wi-Fi vulnerability, a stack buffer overflow was addressed through improved input validation. This particular vulnerability was discovered by Gal Beniamini of Google’s Project Zero.

You can download the full firmware from iDownloadBlog’s Downloads page.

iOS 10.3.0 came with 100+ bug fixes along with performance improvements and security enhancements. Some of the new features in iOS 10.3 include:

For the full overview of changes in iOS 10.3, read our thorough walkthrough. Information on the security content of iOS 10.3.1 is available in Apple’s support document.

As mentioned, iOS 10.3.1 is available for iPhone 5 and later, the fourth-generation iPad and later and the sixth-generation iPod touch and later. iOS 10.3.2 beta 1 was seeded to Apple’s registered developers last week.

If you spot other changes in iOS 10.3.1, let us know in comments or shoot us an email to tips@iDownloadBlog.com and we’ll update the article accordingly.