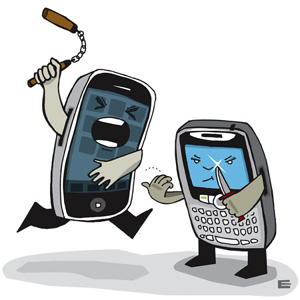 According to the latest quarterly data from research firm Gartner, BlackBerry’s share of the global smartphone market is now 0.0 percent versus its peak market share of approximately 20 percent in 2009. To be precise, the Canadian company’s global market share in the fourth quarter of 2016 stood at a rather measly 0.0481 percent, Gartner said yesterday.

Of the more than 432 million smartphones sold during the holiday quarter, just 207,900 were BlackBerries running the company’s own operating system (BlackBerry also sells devices that run Android, like DTEK60 and Privilege). The development marks the end of an era, nearly ten years after Apple launched its iPhone.

As you can see for yourself, the smartphone battle is now definitely a two-horse race with Android accounting for a hopping 81.7 percent of smartphones sold worldwide and iOS holding onto its 17.9 percent share. Combined, iOS and Android captured a record 99.6 percent market share in the holiday quarter.

For context, 352.7 million smartphones running Google’s Android operating system were shipped during the holiday quarter versus 77 million iPhones. Note that Windows 10 Mobile captured an insignificant 0.3 percent market share, a drop from the 1.1 percent share in the year-ago quarter.

As for BlackBerry, the writing has been on the wall for some time now.

In the prior quarter, for example, BlackBerry’s global market share was 0.1 percent with estimated sales of 377,800 devices. According to BlackBerry CEO John Chen, the company sold only about 400,000 phones in the June 2016 quarter.

Global smartphone sales to end users by operating system in the fourth quarter of 2016 (thousands of units). Source: Gartner (February 2017).

In September 2016, the company stopped making its own phones.

BlackBerry’s undoing is its own fault—their sales have been free-falling since 2009.

I vividly remember after Steve Jobs announced iPhone BlackBerry’s then co-CEOs laughing off the announcement. In their view, iPhone would never gain any traction with the mainstream market. If they hadn’t been blindsided by the handset’s release, I’m sure things would have been different for them.

Although BlackBerry last year didn’t release any phones that run its new BB10 operating system, the company claims that the software has a strong following around the world in enterprise and government, as well as consumers in particular markets.

“I want to make sure that our customers and users don’t get concerned that we’re not continuing to support and invest in BB10 because we absolutely are,” Alex Thurber, BlackBerry’s Senior Vice President of Global Sales told the Financial Post in January.

Would you say that BlackBerry is pretty much dead in the water at this point or is there hope left for the struggling Canadian company, do you think?