Anyone who might have a creative nature at heart will probably have a lot of fun with a new jailbreak tweak release by merdok called AppCon.

This tweak lets you customize your Home screen app icons with anything you want from your Photo Library, and more importantly, you can customize each app icon on a per-app basis, or you can make a complete picture out of the entire grid of app icons on a page.

The main feature, in my opinion, is being able to change a single app icon at a time on your Home screen, which is particularly nice if you download an app and you hate the way it looks and wish you had a way to replace the icon with another image.

While there are themes for this reason, themes are reliant on WinterBoard and will theme everything, which may not be everyone’s cup of tea. AppCon helps combat this problem by letting you theme single app icons on a per-app basis, and this is an invaluable customization feature.

To do it, all you have to do is follow these steps:

1) Put your iPhone into ‘jiggle’ mode.

2) Single-tap on any app icon on your Home screen that you want to change. 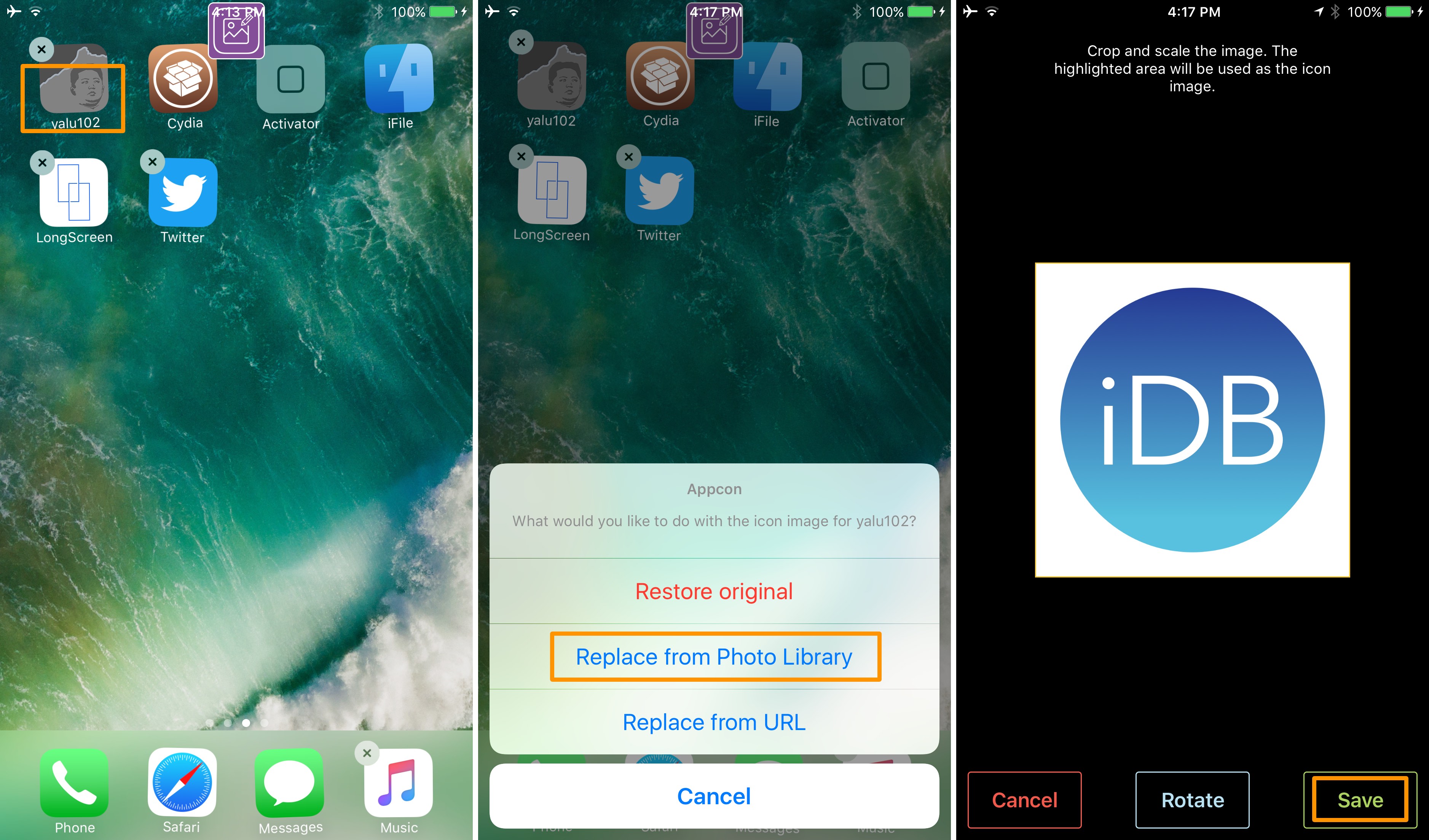 Note: We will use the Yalu102 app icon for this example.

4) Pick an image and then crop it to the right dimensions.

5) Tap on the green Save button.

And there you have it, here’s the end result: 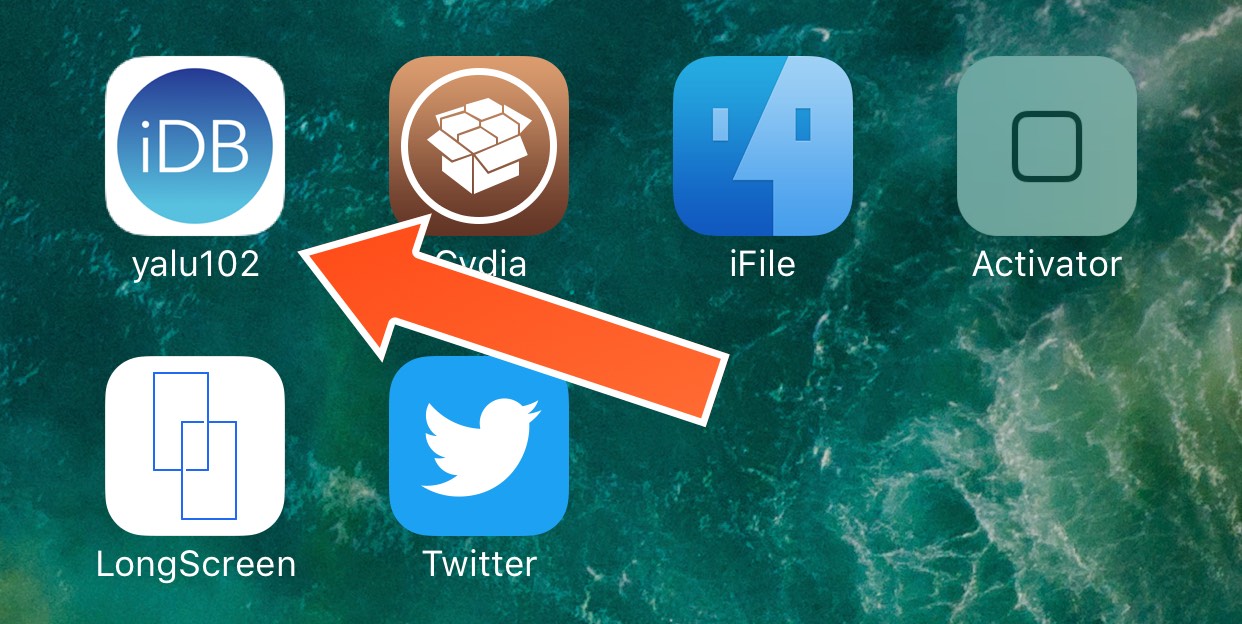 You can also source your image from any URL instead of your Photo Library, and you can also reset your app icon to its default by entering jiggle mode again, bringing up the menu again, and just tapping on the red “Restore original” button instead of either of the replacement buttons.

Changing the Home screen with the grid theming option

Another feature of AppCon is the ability to theme all of your Home screen page’s icons with a single image, which can produce some very interesting effects. Although this feature isn’t really preferred from an image recognition standpoint, it can still be used to make your Home screen look cool.

1) Put your iPhone into ‘jiggle’ mode.

2) Single-tap on the purple AppCon button at the top of the screen. 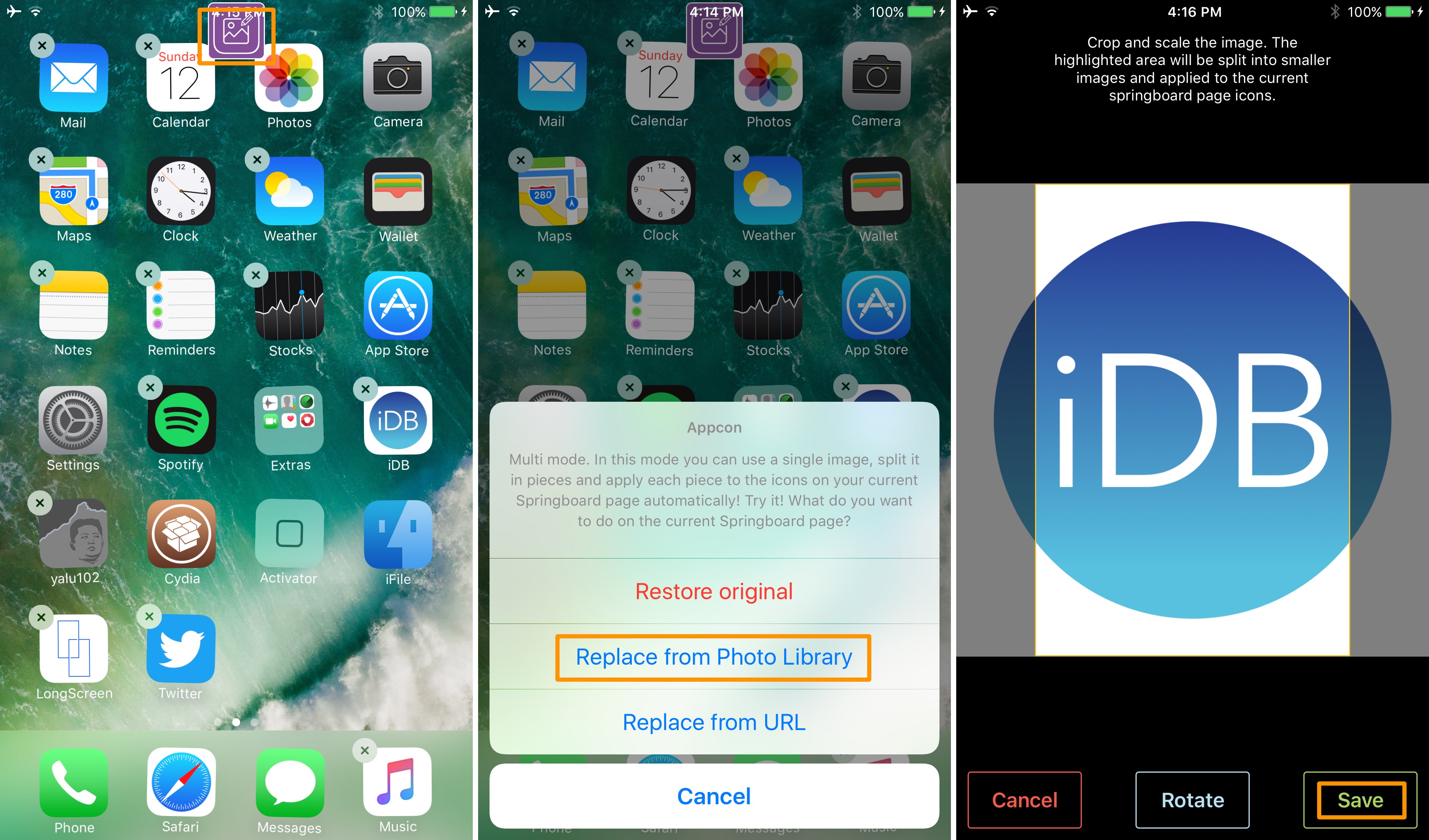 4) Pick an image and then crop it to the preferred dimensions.

5) Tap on the green Save button.

And here’s the final result: 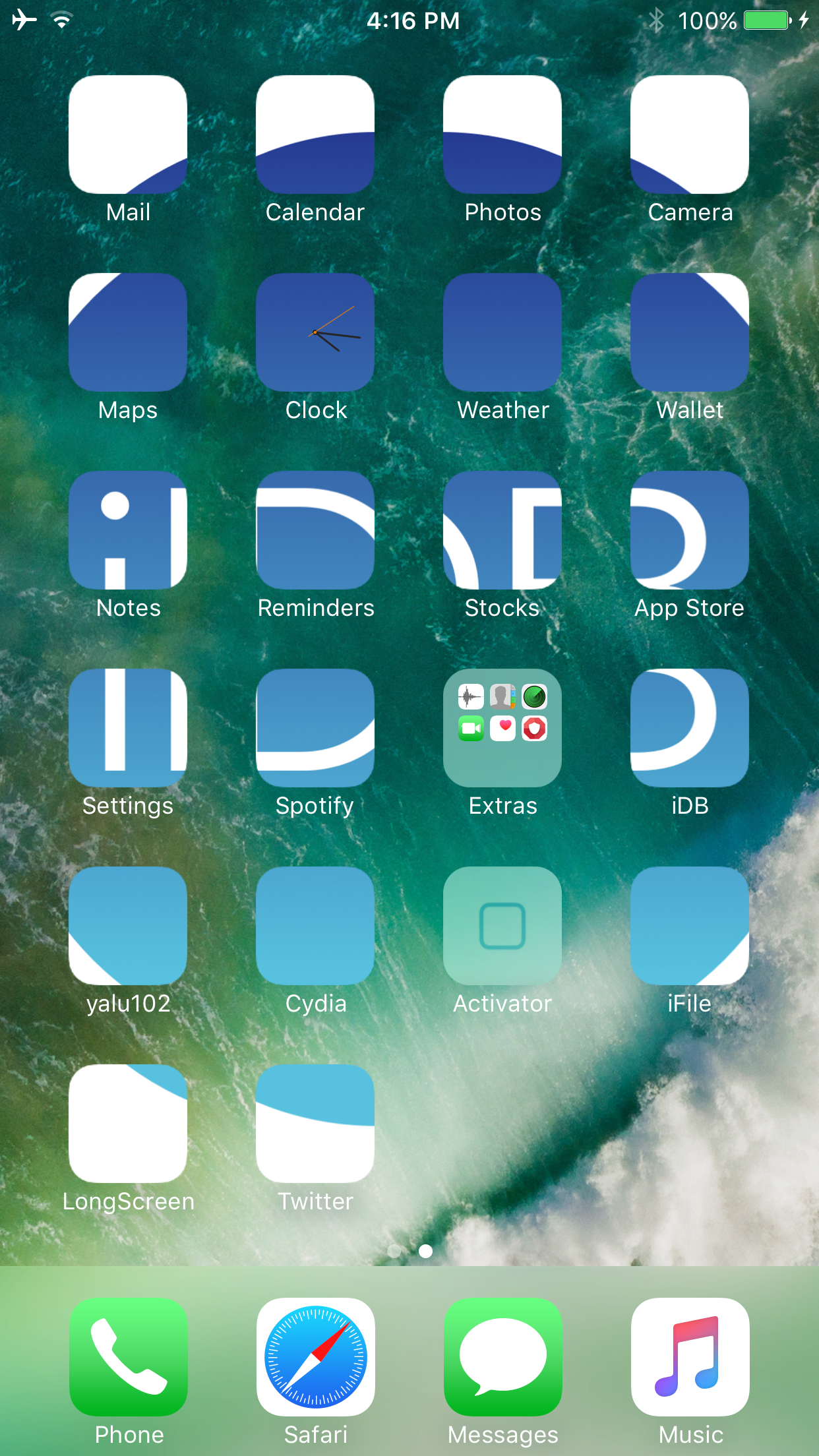 As you can probably tell, it makes it a lot harder to tell what app is which, as you have to go by the name tags instead of the app icons, which some people may not like.

That said, I don’t think this feature is as useful as the one that lets you change icons on a per-app basis. On the other hand, I’m sure there are some themers out there who would eat this feature alive, so I don’t think it’s completely useless to everyone.

It’s worth noting that folders and other transparent icons, like that of Activator, won’t be themed. This really only works with icons that are actual images, such as the stock apps on your device, or the apps you download from the App Store, with the small exception of a few apps that you can get from Cydia as well.

AppCon adds a preferences pane to the Settings app where you can configure the tweak to your liking: 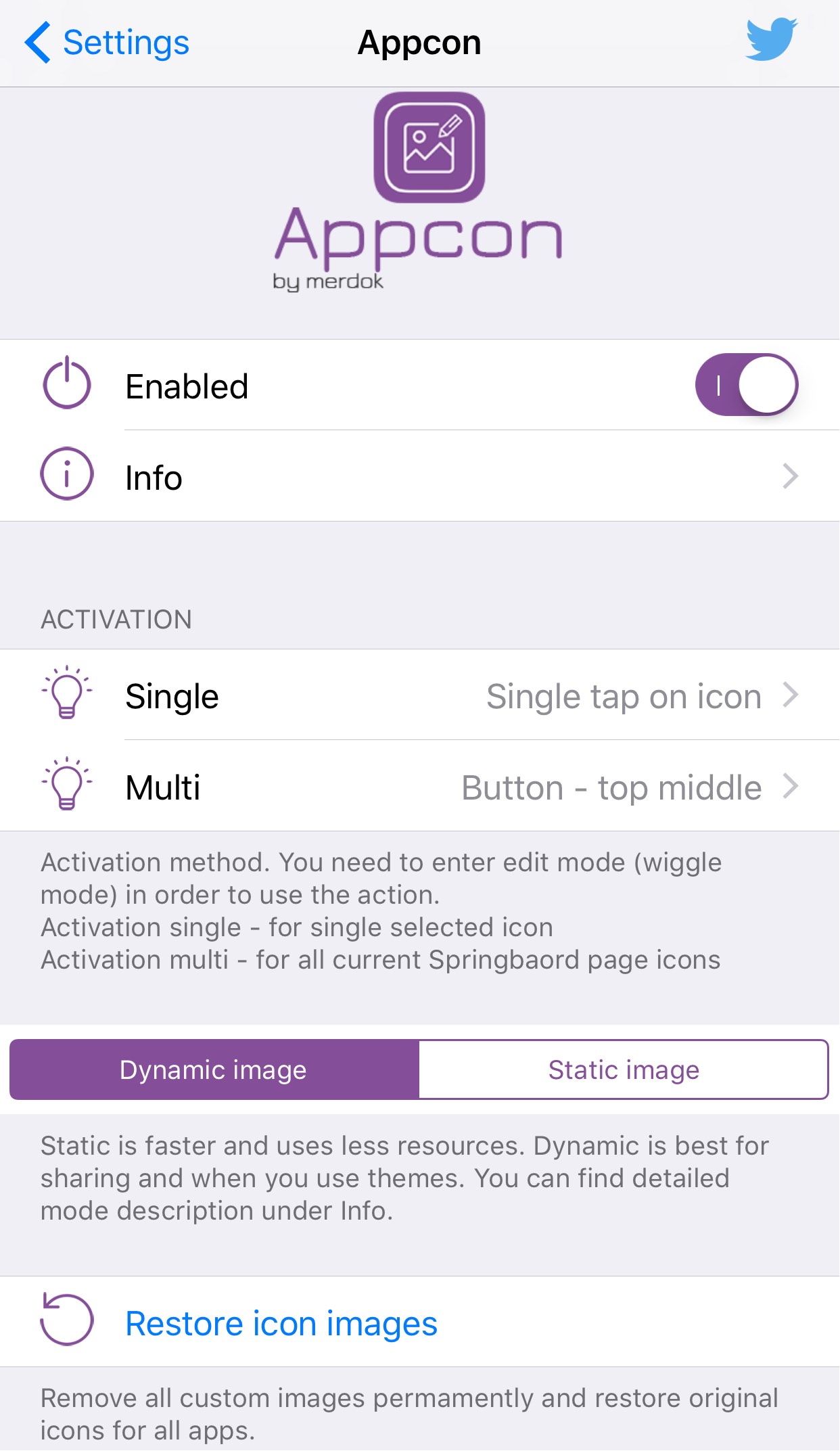 Among the things you can change are:

That about wraps it up for what AppCon can do, but as you can see it’s very powerful and provides a long list of possibilities for the creative jailbroken device user.

It appears to be very lightweight with minimal impact on system resources. It doesn’t produce extraneous lagging, which is also pretty nice for a tweak of this caliber. That said, if you’re worried about performance issues, don’t fret; give it a try!

If you’re interested in trying AppCon, you can download it from Cydia’s BigBoss repository right now for $1.99. The tweak works on jailbroken iOS 9 and iOS 10 devices.

What are your thoughts on AppCon and which feature do you like the most? Share in the comments below!