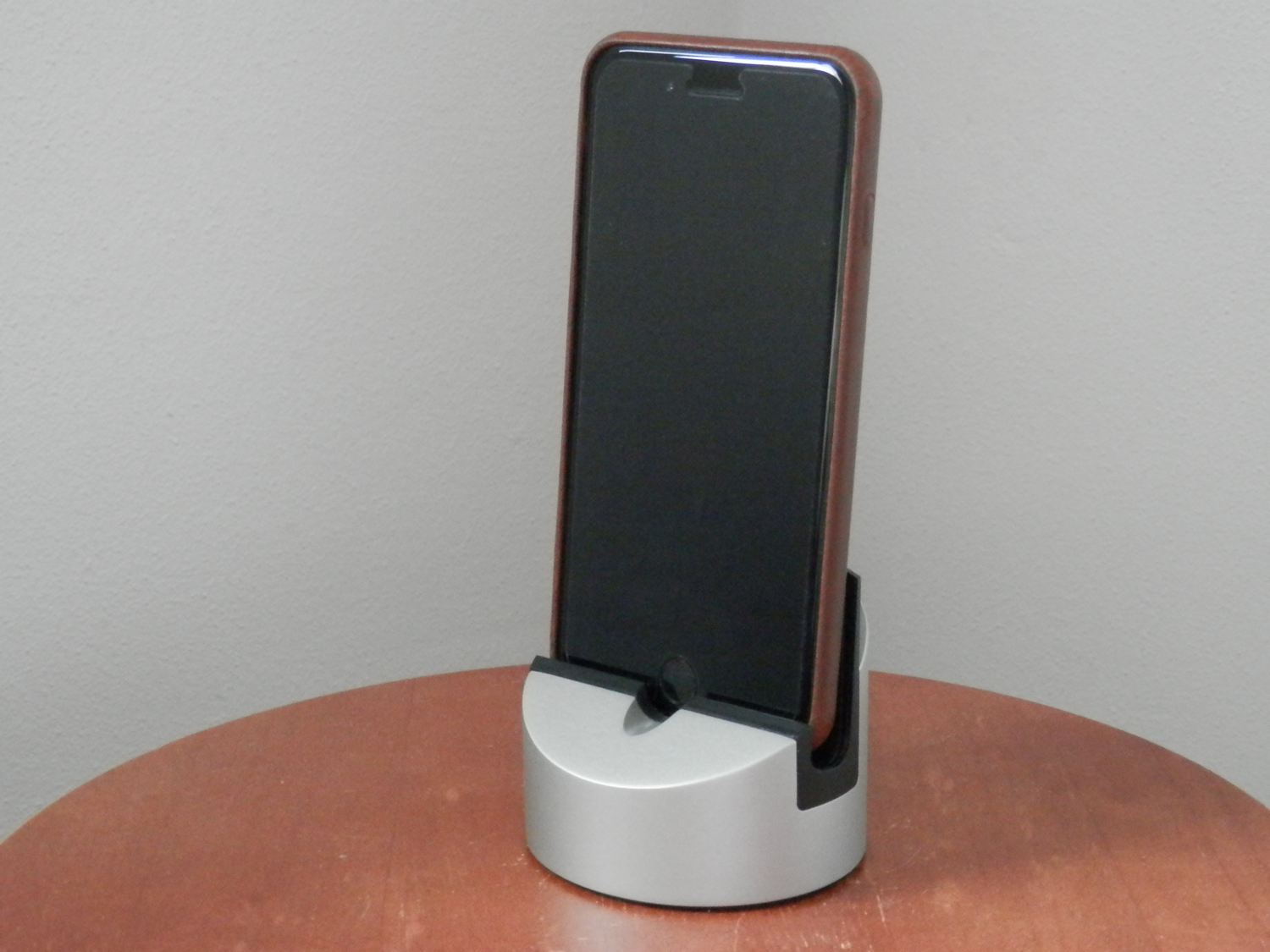 I do a lot of work at my office desk at home, and for that reason alone, I have a love for things that help keep my work space uncluttered. One of the things I like to have that helps with that is a good quality dock that I can use to put my iPhone or iPad somewhere without it taking up much real estate where I’ll be putting my papers or elbows.

The Gravitas dock by Henge Docks is a good choice, and in this review, we’ll give you an up-close look at it.

A dock made to stay put

Gravitas is a very hefty dock, weighing in at 2.5 pounds. It’s built out of a custom zinc alloy, which looks like aluminum, but is approximately 265% denser. Despite how much it weighs, it’s very small, not really much wider than your iPhone itself. That said, it doesn’t take up too much space on your desk, allowing you to dedicate that space to more important things.

With this kind of weight, you never have to use two hands to remove your device from the dock, because the base is heavy enough that it over-powers the Lightning port’s plug resistance that normally causes lighter docks to come up with the device as you pull up on it.

Comparable in weight to the Grovemade walnut dock we showed you back in August, I have to say I’m a fan of these heavier docks, because they’re easier to utilize when your hands are doing multiple things at once, as mine often are, because you don’t have to put everything down just to take your device off with two hands. 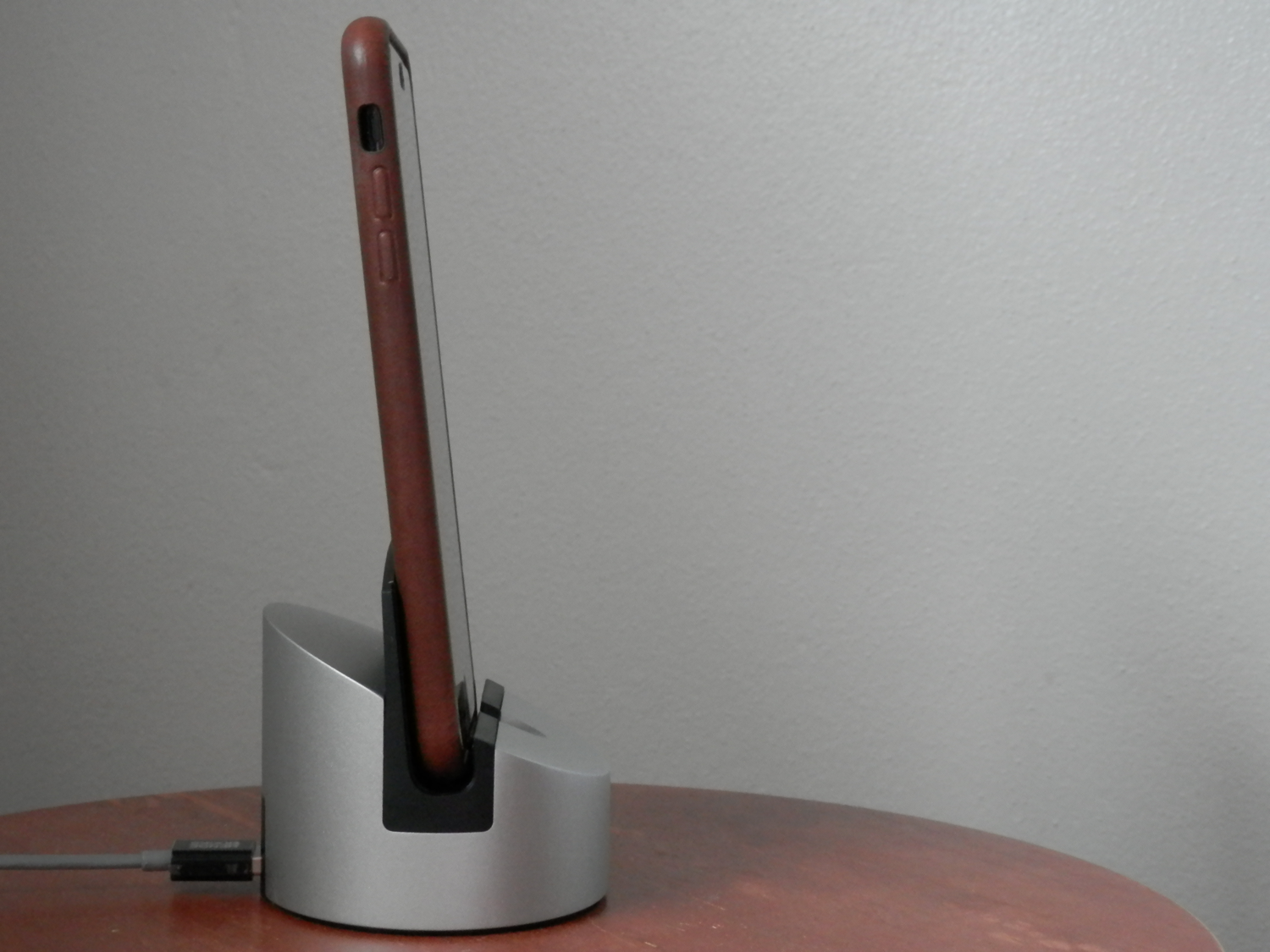 The exterior of the dock is coated to look just like all of Apple’s classic silver aluminum unibody computers, but at the core is a polycarbonate insert, which can be interchanged depending on the type of device you’re using. One insert is made for the iPhone 6/6s specifically, while the others let you use iPads or larger iPhones with the dock, even if they have cases on them. 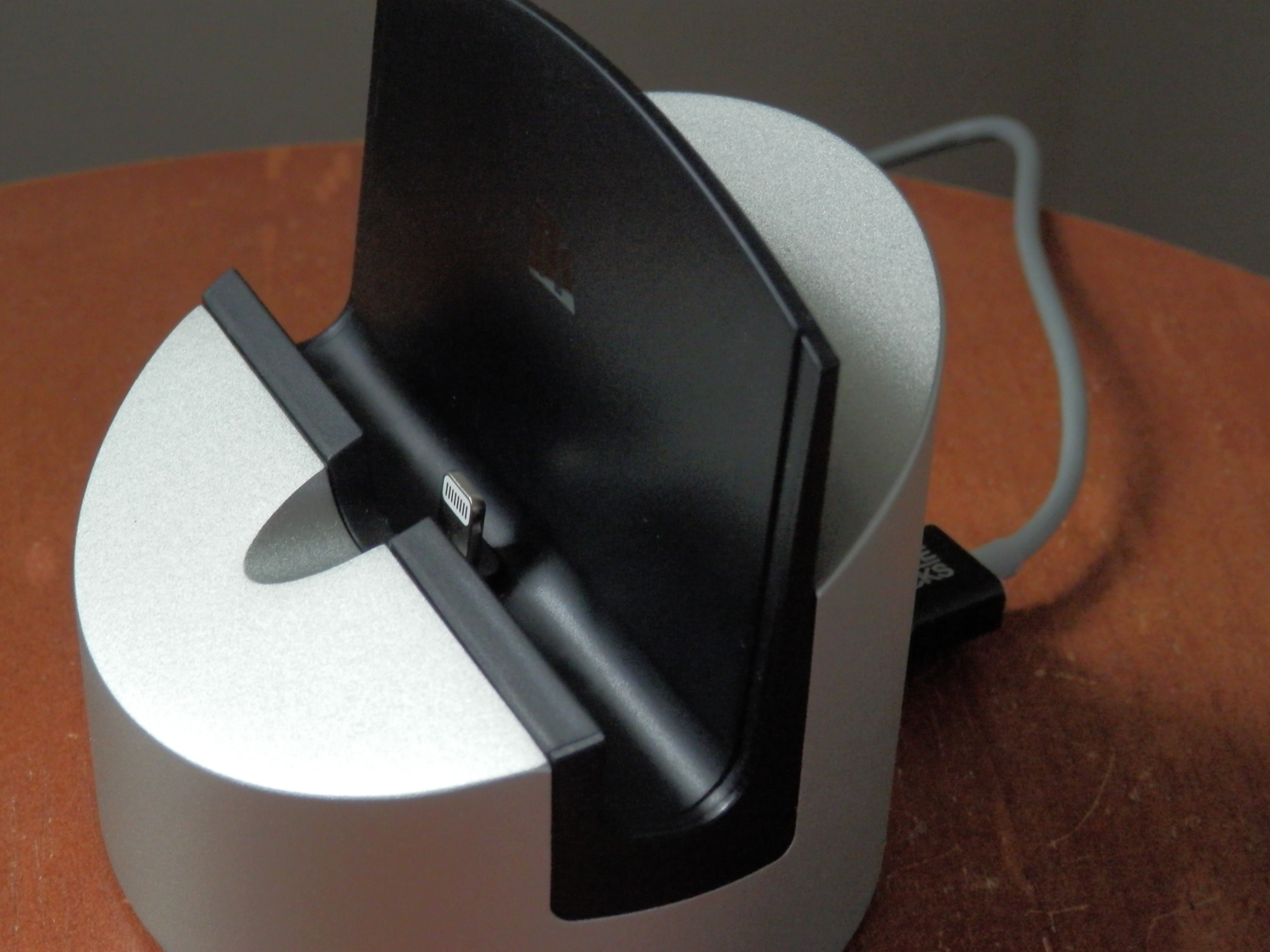 Unfortunately these inserts are hard plastic, so they don’t have any rubber to protect your iPhone from scuffs from use, day in and day out. This would be a nice feature for the caseless iPhone users out there, but I personally don’t have a problem with it because I choose to use a case. Again, this is a difference of opinion, so I can’t speak for everybody.

Because of the weight of the dock, even if you’re docking an iPad, it’ll stand up straight with no problem. The plastic insert made for the iPad even has a back support that helps keep the iPad from toppling over, so it’s nice and sturdy. 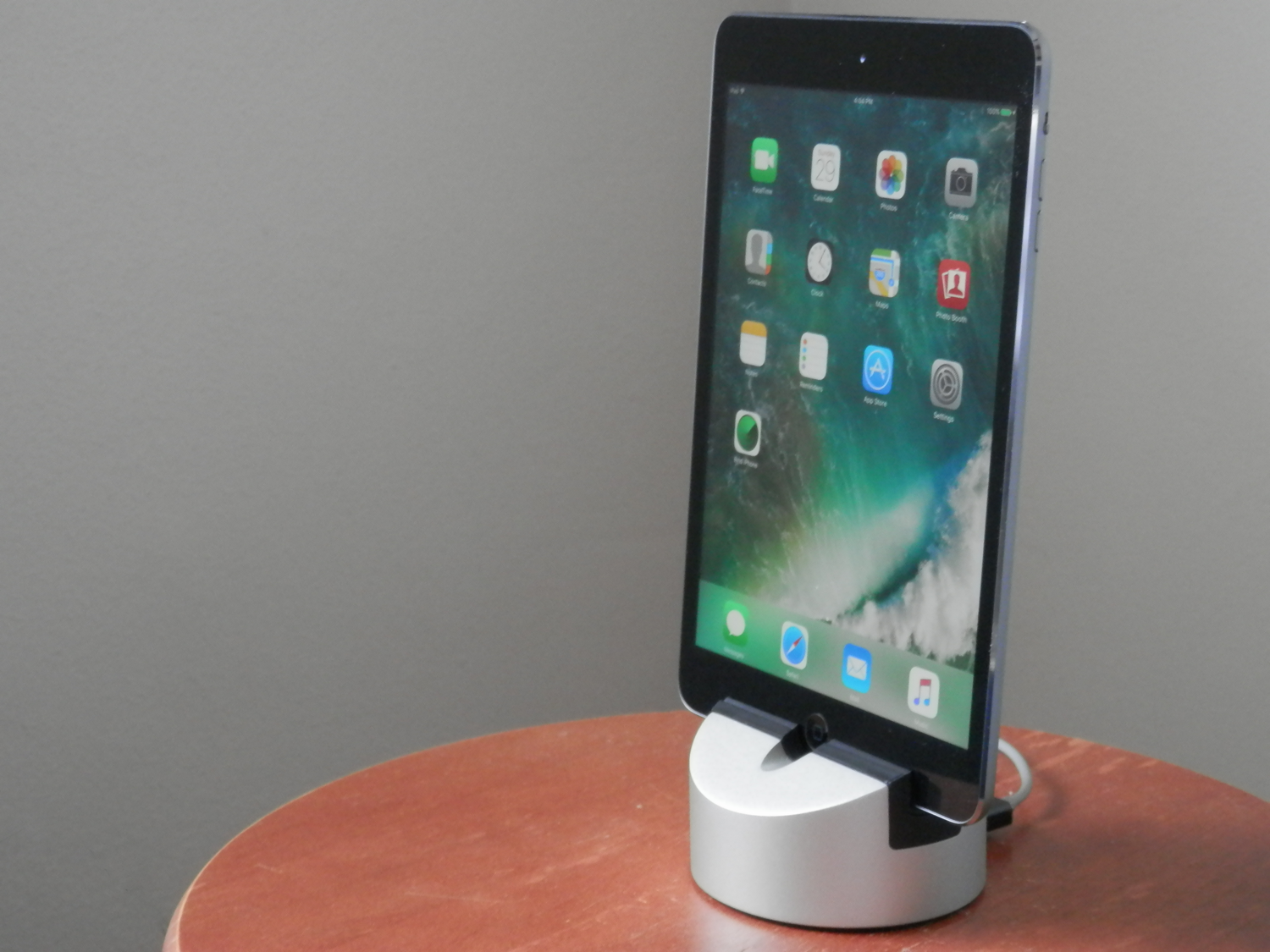 It’s also worth noting that when you have your iPhone or iPad docked in the Gravitas, it’ll be perfectly aligned with the Home button groove, which allows you to still use Touch ID and the Home button functionality, even when the device is docked. And thanks to the weight, the dock doesn’t tip over when you press it.

On the back of the Gravitas, you get two things: a USB-out port, and a 3.5mm audio jack port. The USB-out port is used with the supplied USB-A to USB-A cable, which can be used with any AC adapter to charge your iPhone. It’s recommended that you use the AC adapter that came with your device, to prevent any power issues from occurring from cheap aftermarket options. 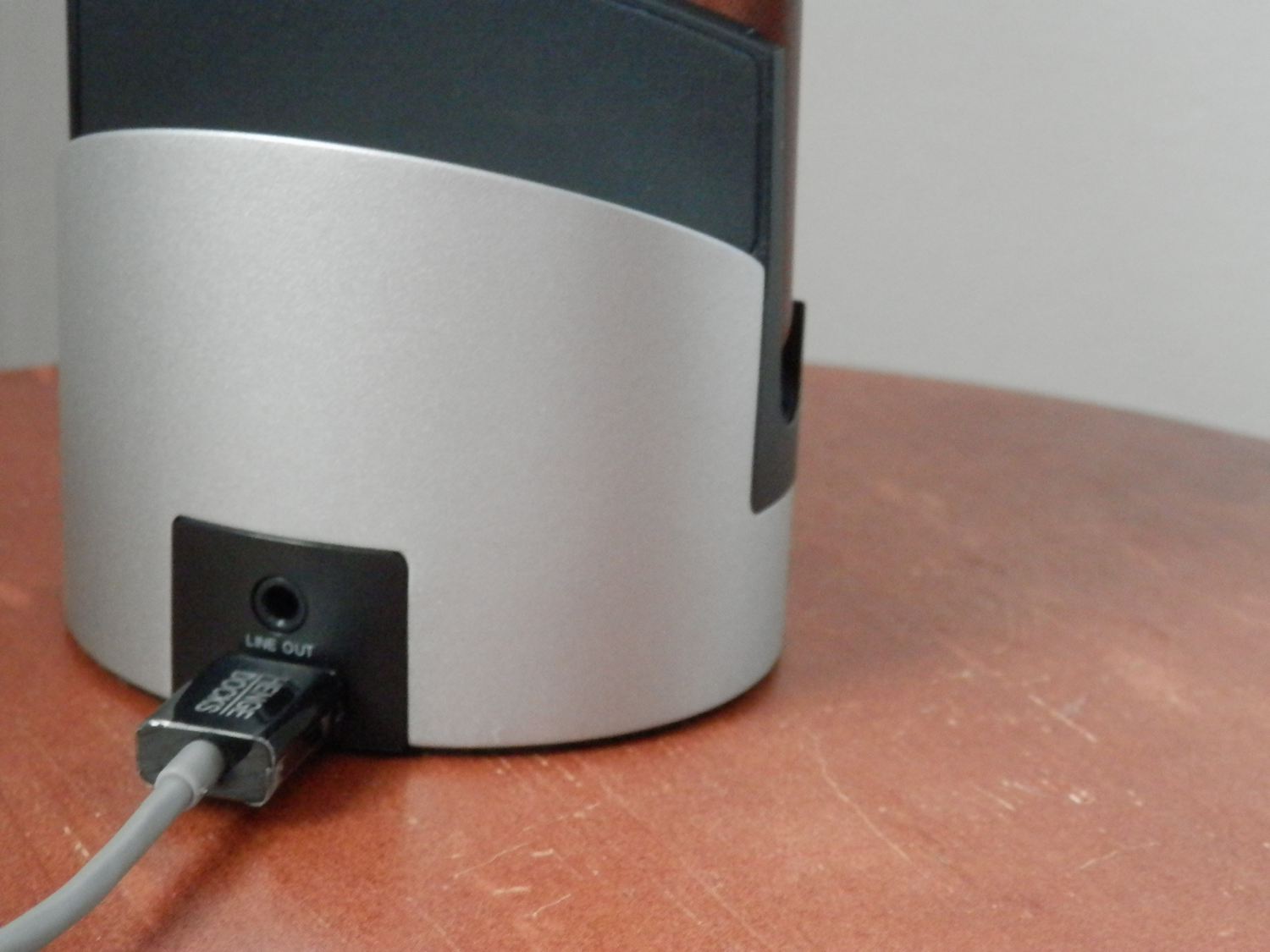 The 3.5mm audio jack can come in handy for anyone who has the iPhone 7/7 Plus, as it provides a way to use your headphone or speaker in a way you wouldn’t normally be able to while charging your device simultaneously, unless of course you already had wireless headphones or a splitter adapter.

On the bottom of the dock, you will find a rubber boot that keeps the dock in place anywhere you put it. This prevents accidental sliding, which would be detrimental if you were to bump your dock with something heavier. 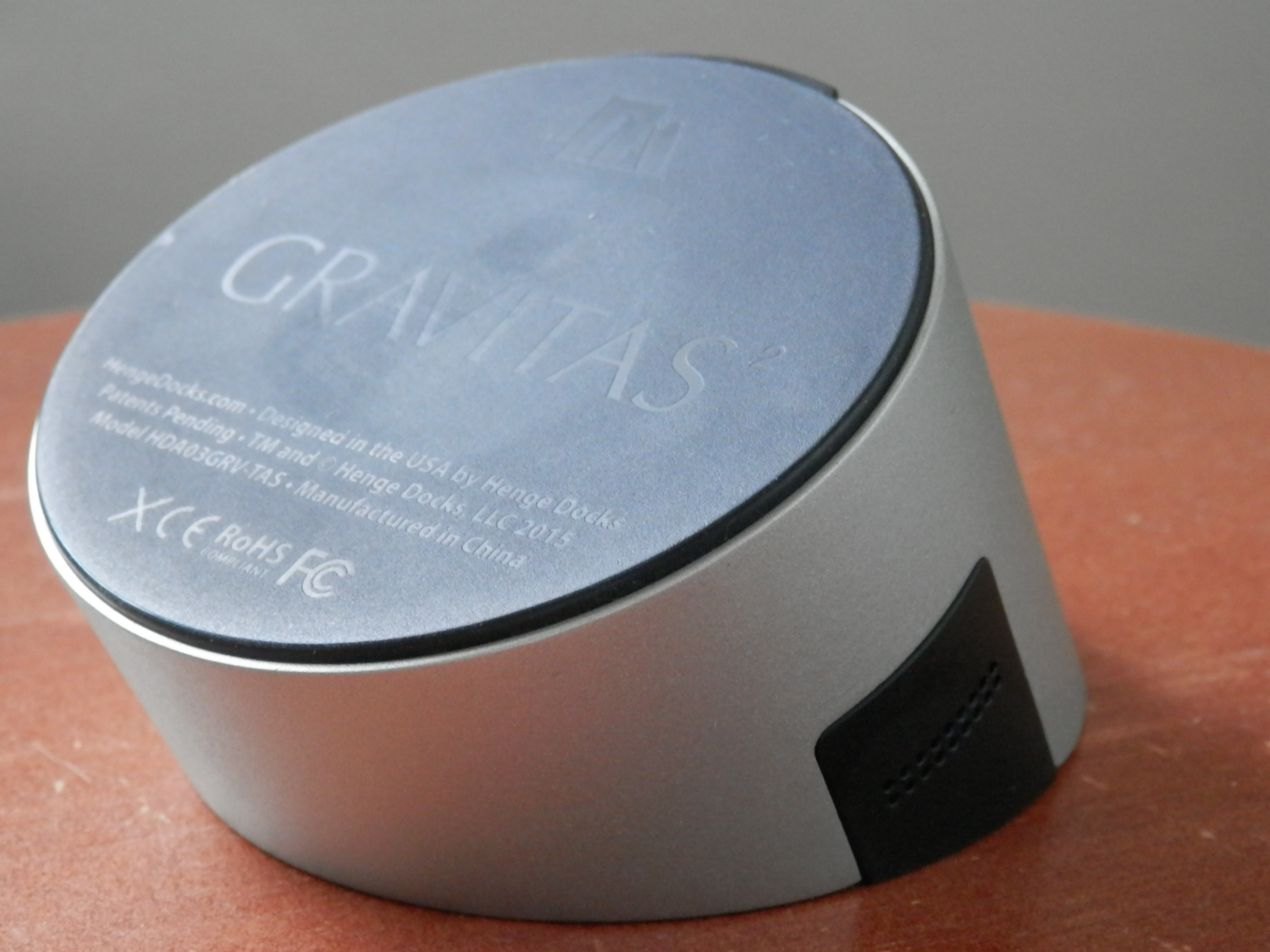 Thanks to this grip, you don’t have to worry about your devices face-planting on the floor due to a little accident, and that’s a nice bit of cheap insurance right there.

The pros and the cons

It wouldn’t be a review without talking about the potential pros and cons of the product, so I’ll share them in a simple outline format below:

Overall, I would say this is a pretty cool iPhone and iPad dock. It’s pretty nice that the Lightning connector is already integrated into the dock, which some docks don’t have, and another thing is it has the perfect weight and desk footprint ratio, so it’s low-key.

You can pick up a Henge Docks Gravitas dock on Amazon for $70, which might be a little pricey for some, but compared to a lot of competition, Gravitas has a lot of quality features that many other docks don’t have, like the added weight and the 3.5mm audio jack.

What are your thoughts about the Henge Docks Gravitas dock for iPhone and iPad? Share in the comments below.