Since launching its Pixel and Pixel XL smartphones in early-October 2016, Google’s learned that real artists ship—the firm’s done a poor job at shipping its latest and greatest phones which received glowing reviews due to their excellent cameras, built-in Google Assistant and other nice features. The company may have grossly underestimated demand for the larger 5.5-inch Pixel XL models.

One visit to its online store is enough to realize Google is struggling to meet consumer demand for its iPhone 7 rival. Regardless of the color option, both 32GB and 128GB models of Pixel XL are currently out of stock at the Google online store, said The Verge.

Pixels are only offered in 32 and 128 gigabytes and the 128GB one hasn’t been in stock since November 30. Separately, AppleInsider learned from a source at Best Buy, which only sells 32GB Pixel models, that demand for Pixel isn’t a tenth of that for iPhone 7.

For the 128GB Pixel XL, Verizon’s online store is currently quoting shipping times in the second week of March. That model is also out of stock at the vast majority of Verizon’s physical stores. Black Pixel models won’t ship until February and white ones are due in March.

“We’re aware about the inventory issues on the Google Store and Verizon,” a Google spokesperson told The Verge. “Honestly, demand has exceeded our expectations. We’re doing our best to restock on an ongoing basis.”

In fairness, not many companies are able to match Apple’s worldwide distribution infrastructure and the ability to fill inventory across hundreds of carriers and thousands of retail partners. And even with Apple’s expertise in supply chain management, iPhone 7 Plus was pretty hard to come by in September and October (but not anymore). 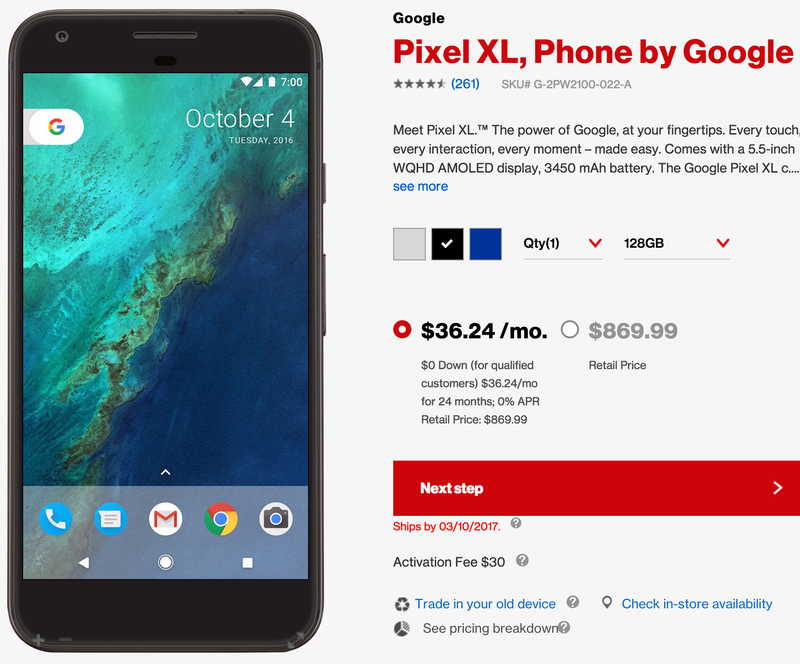 Best Buy’s stock of Pixels is low, too.

“Demand for the Pixel isn’t a tenth of that for the iPhone 7, and we were close in our guesses,” a source within Best Buy’s corporate headquarters told AppleInsider. “But, we underestimated demand anyway.”

HTC-manufactured Pixels file as the first “Made by Google” smartphones.

Pre-loaded with Android 7.1 Nougat and Google Assistant, Pixels come in two sizes: five inches and 5.5 inches. Google claims these phones have “the highest rated smartphone camera ever” and reviews seem to support that. Other Pixel features include a strong battery that lasts all day, a fingerprint sensor embedded into the back shell which can be swiped to quickly access notifications, and more.

Google hasn’t yet released official sales figures for the Pixel phones and neither has Verizon.

For what it’s worth, Pixels may have accounted for a Kantar Worldpanel-estimated 1.3 percent of smartphone sales in the U.S. during a three-month period ending in November 2016.

Apple might benefit from Google’s inventory issues, especially the nearly two-month wait for new Pixel XL orders as disappointed customers may turn their attention to competing devices like iPhone 7 and Galaxy S7.