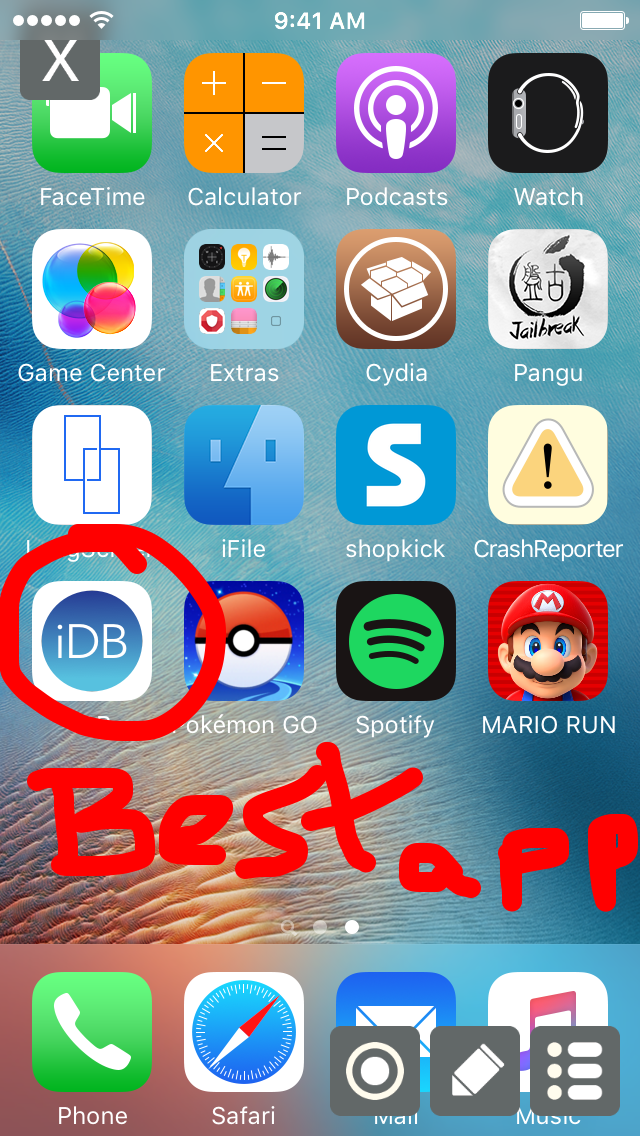 Scriblit is a new jailbreak tweak that lets you turn the display of your jailbroken iPhone or iPad into a virtual drawing canvas, allowing you to doodle all over or annotate just about anything you want.

With a slew of configuration options and tools to pick from, you can use Scriblit for a wide range of things, from helping someone out to toying around with photos, but how you use it will depend on your own creativity.

Right off the bat, I can see myself using a tweak like Scriblit in a situation where I wanted to show someone how to do something. In a situation where you wanted to point someone to a specific button, app, or preferences pane, you would be able to circle something and write a note beside or underneath your doodle right before taking a screenshot of it to share.

Other uses for Scriblit also exist, for example doodling all over a photograph to share a laugh with your friends, but I think the aforementioned use has the most merit of them all.

Scriblit is toggled on or off with an Activator action, which is super convenient because you can access Activator from anywhere on your device, whether you’re on the Home screen, Lock screen, or in an app. 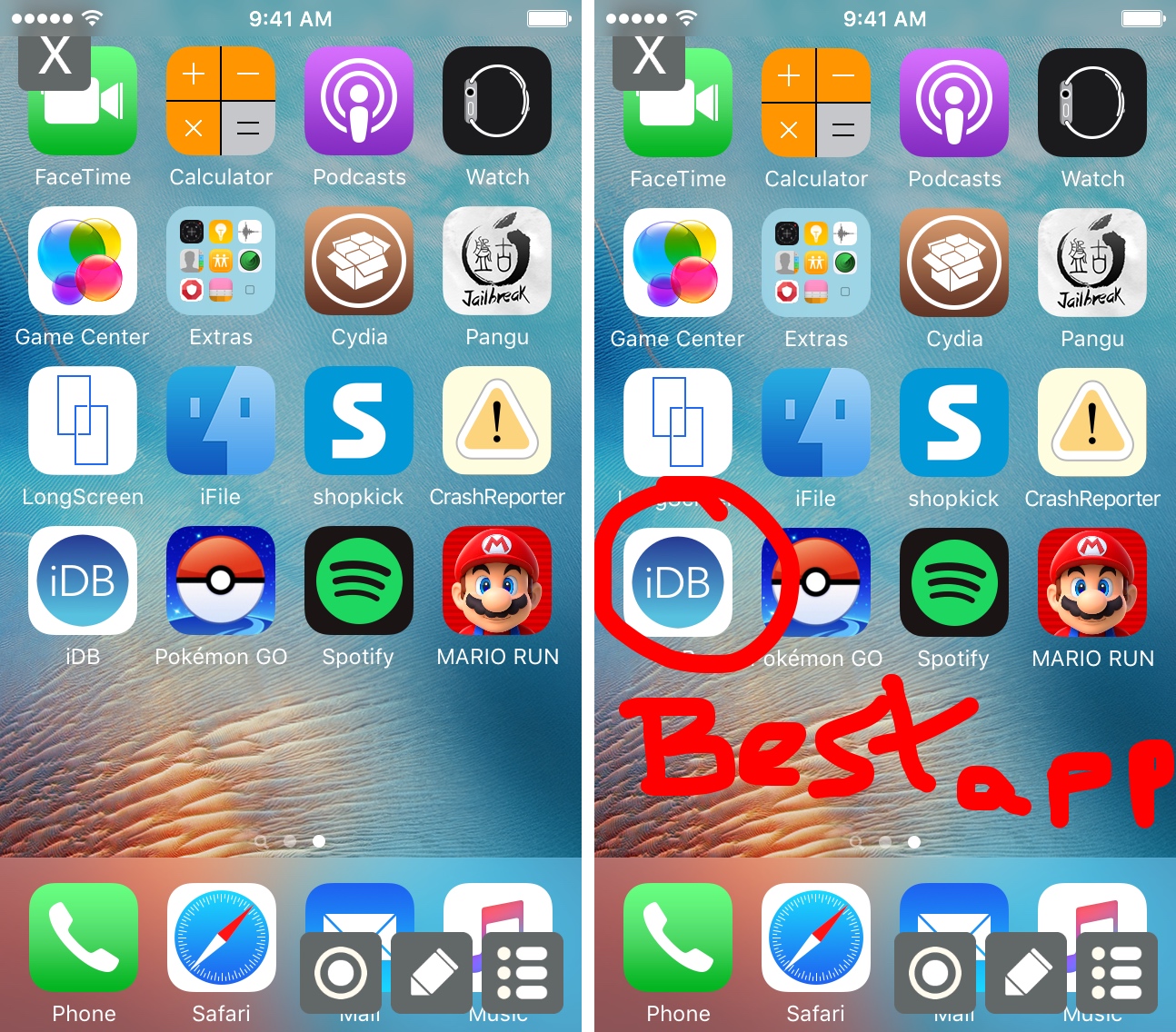 When you invoke the Activator gesture you chose, you will see a few new buttons pop up on your screen. Those buttons do the following: 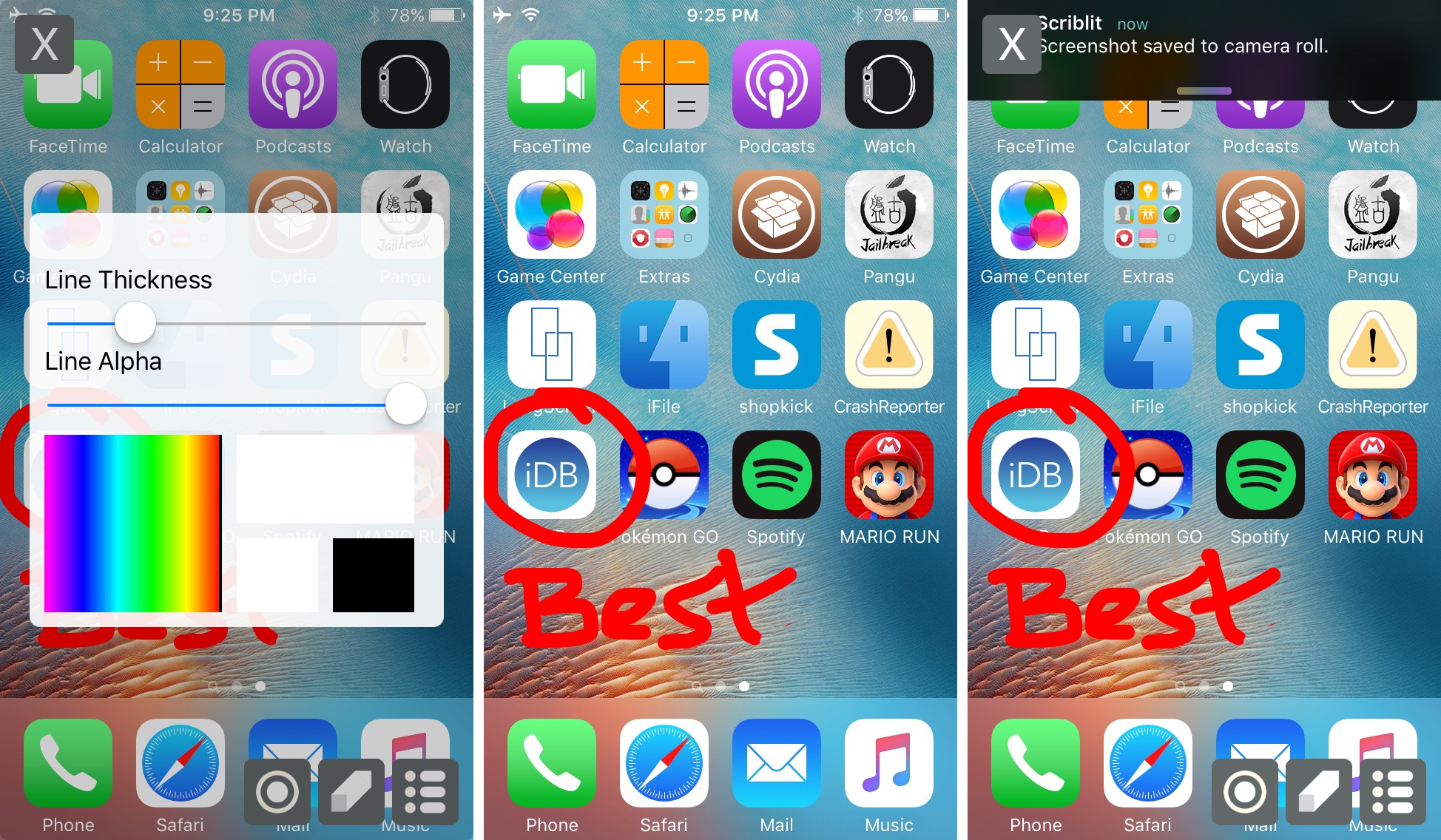 As you can also see, the color picker is a full-blown picker, so you can choose from virtually any color rather than having to select a specific color from a list, which means the possibilities are essentially endless. The developer also recommends thinner lines on devices with smaller screens, as the thicker pen lines can become quite cramped unless you have a plus-sized iPhone or an iPad.

Aside from that, being able to toggle between a pen and eraser tool on demand is pretty useful too, because if you screw up somewhere on your annotation or drawing, you can easily apply fixes on the fly without having to start all over.

As far as the screenshot feature is concerned, when you’re done drawing, you can tap on the button to save a screenshot of your doodle so it gets put in your Camera Roll to be shared with others later on. You will notice a notification banner saying a screenshot was saved whenever you do take one, and this works as a sort of confirmation message to let you know it worked.

Now that you see how the tweak works, it’s time to look at the options it has to configure. To do that, you’ll go to Settings → Scriblit after you install the tweak:

Here, you will be able to enable or disable the entire tweak and choose an Activator action you want to use to invoke the tweak. We recommend using a gesture that works system-wide, rather than one that only works on your Lock screen for example.

You’ll also see a toggle switch dubbed Retain Settings, which keeps all of your settings how they are until you respring, which once enabled, will overwrite the settings you saved in the actual Scriblit interface we shared with you earlier.

By setting defaults, these are going to be the values you see every time you open the Scriblit interface; it doesn’t mean you can’t change them later from the Scriblit buttons afterwards, but if you do, they will reset back to the default the next time you close and re-launch the tweak with Activator.

A complimentary Respring button is also included to finalize all the changes you make to the preferences pane. It also works for any other time you need to respring your device, and not just when you make changes to the Scriblit tweak, so keep that in mind.

I think Scriblit is a really cool novelty tweak that lets you have a little more fun with your jailbroken iPhone or iPad.

I can’t really say it’s one of those tweaks everyone has to have, but I will say it’s probably one of my favorites I’ve reviewed in a long time simply because I feel like I could actually use it.

If you’re interested in trying Scriblit, you can download it right now for $1.50 from Cydia’s BigBoss repository. All versions of iOS 9 are supported.

What are your thoughts on Scriblit? Share in the comments below!