Super Mario Run just launched on the App Store, and as you can imagine, there has been a lot of energy from Apple and Nintendo fans around the world.

Being made for a smartphone rather than a handheld gaming unit as these kinds of games are usually made for, the game mechanics for Super Mario Run are a little different from your average Super Mario game.

In this post we’ll be outlining the many different moves you can perform in Super Mario Run and explain what they do.

Although the game will have you basically running most of the time, there are other moves you can perform to improve your performance in each level or game mode. Using special moves will allow you to take out enemies, collect more coins, impress toads, and more.

So without further ado let’s get right into the moves you can perform: 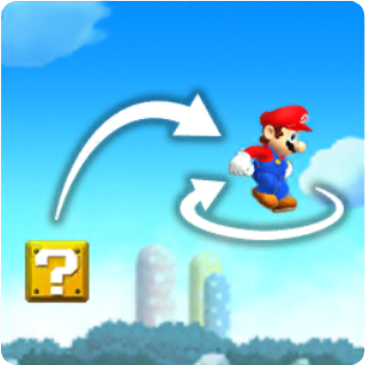 As a part of the midair spin, you can tap on the screen while you’re in midair and your character will spin. This will create an auto-rotation effect and slow you down as you descend to the ground, giving you more control over where you land. 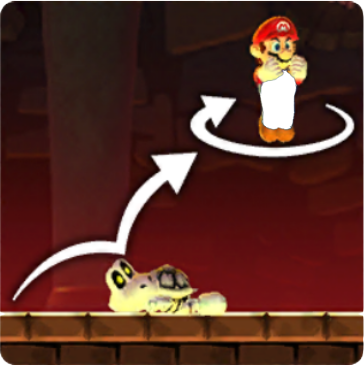 If you tap on the screen while you’re in the middle of the air and near an enemy, you will spin like a helicopter as you descend and take out the enemy you’re near. 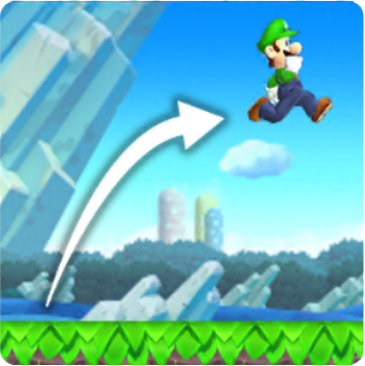 If you’re playing as Luigi, you can use his notoriously long legs to your advantage and perform a high jump. When you jump by tapping, you can continue to hold down on the screen and Luigi will jump significantly higher than any other player in the game is capable of. 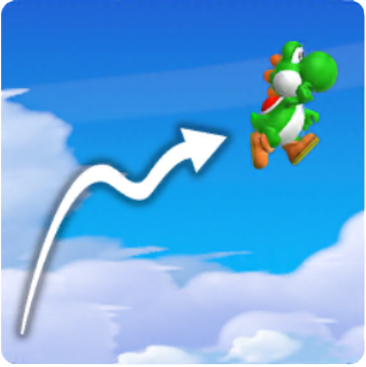 If you’re playing as Yoshi, you can tread air for a little longer than most characters by utilizing his flutter jump ability. To activate it, just hold on the screen in the middle of a jump and you’ll flutter in the air for a while, letting you get across far ledges with ease. 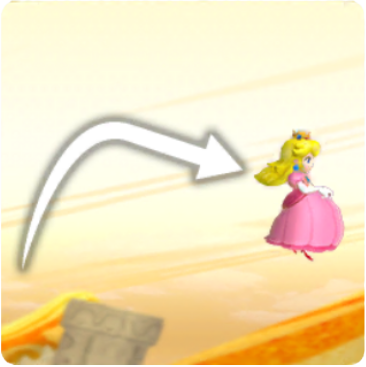 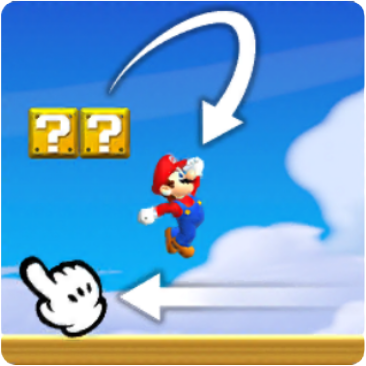 If you jump with any character and suddenly realize you’re headed straight for danger, you can stall out your jump by swiping to the left while you’re in the middle of the air, which will stop your jump and return you to the ground faster. 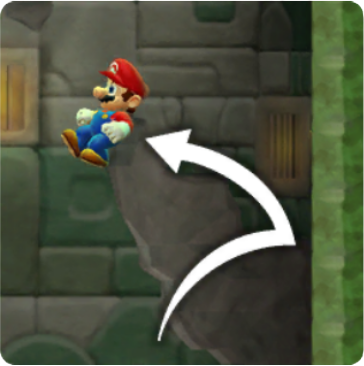 If you happen to come to a dead end in the game, then chances are you’ll be able to bounce off the walls to get where you’re headed. When you reach a wall, just tap on the screen and you’ll jump towards the wall in the opposite direction, which will let you get atop any ledges above your head. 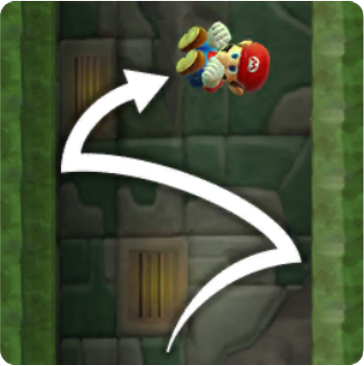 If the wall you’re trying to jump is taller than anticipated, you can repeatedly jump from one side to the other by taping repeatedly as you approach the opposing wall. This ability will let you climb to the top of a tall wall obstacle. 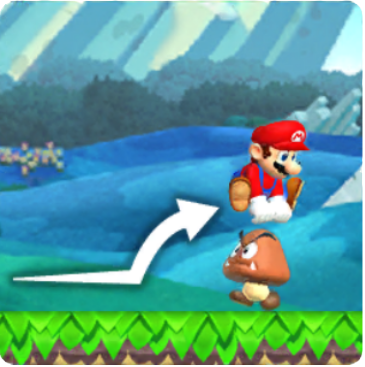 Your character automatically vaults over enemies and small obstacles as you run. There’s no need to tap on the screen or swipe anything. 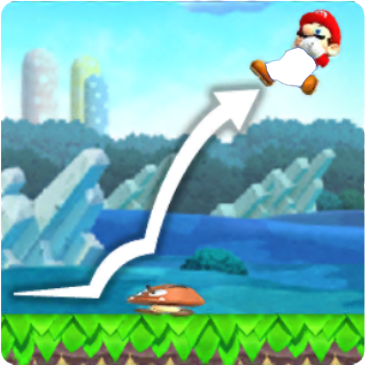 If you’re in the middle of vaulting over something, you can tap on the screen to initiate a jump in the middle of it all. This is particularly useful for squashing enemies, but it also lets you get to the top of higher platforms while taking out enemies simultaneously. 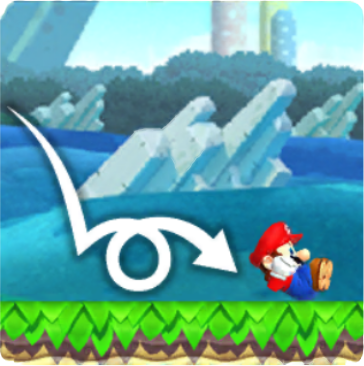 Whenever you fall a great distance, such as from a high platform to a low platform, your character will automatically perform a landing roll, which breaks the fall. While you’re rolling, you will act like a bowling ball and can take out some enemies in the process. 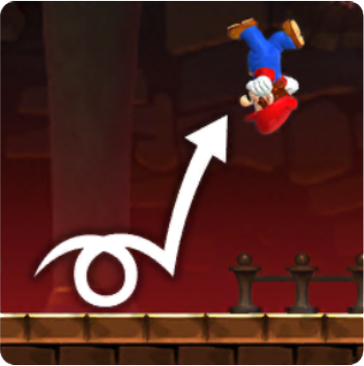 While you’re in the middle of rolling, you can tap on the screen and you will perform a move called a rolling jump. This packs a lot of energy and helps you to jump nice and high. It also helps you avoid enemies when your roll comes to an end. 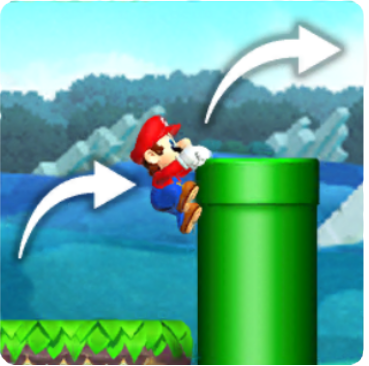 Your character can climb over certain obstacles automatically without your input. This includes a number of short pipes. 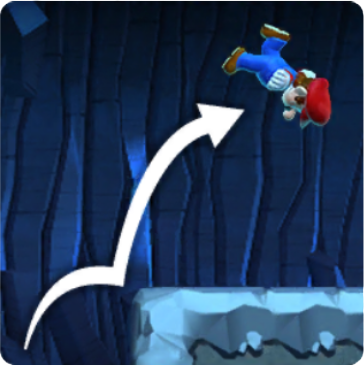 While your character is in the middle of climbing an edge, tap on the screen to perform a climbing jump. This can help you to get over edges even faster, as well as get a bit higher in the air to reach a special platform or to get some coins that might be waiting for you. 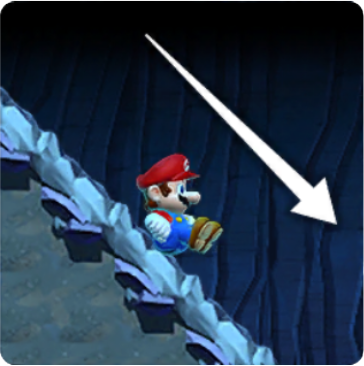 Any time your character reaches a slope, they will automatically begin sliding down it. As you are sliding, you build a strong momentum capable of taking out any enemies in your path. You don’t have to tap or swipe at all during this process. 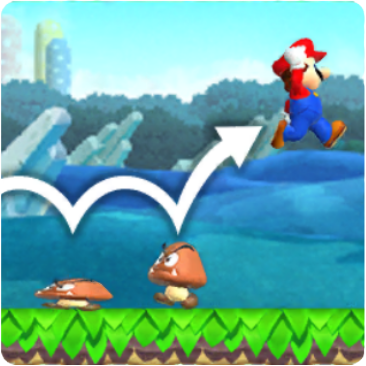 If enemies are in close proximity to one another and you jump on the first one, your character will automatically jump atop the next one. This only works when the enemies are very close, otherwise you would have to jump manually to take out both (or more) enemies. 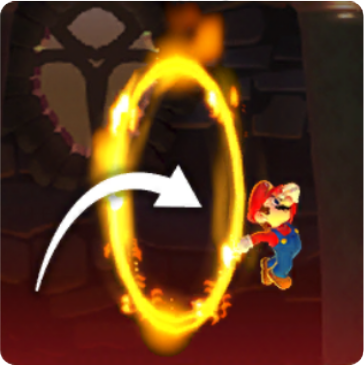 Should you ever come across a ring of fire while inside of the castle, your character will automatically pass safely through it without any input needed on your part. 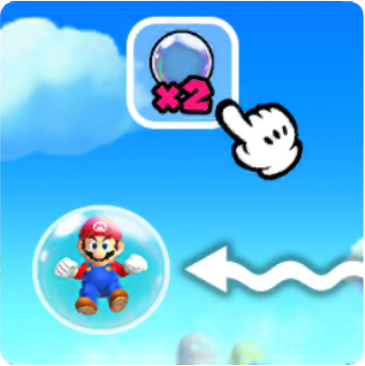 Throughout the game you might encounter bubbles in some levels. These let you float around in the air. You can tap on the bubble icon at the top of your screen when it’s available to pop yourself into a bubble that will float you backwards, rather than forwards. 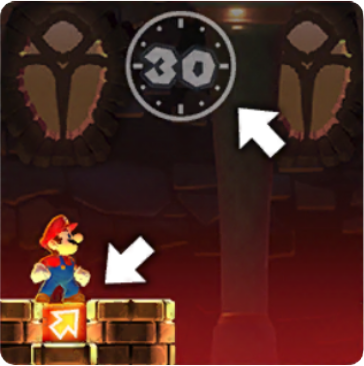 If you find yourself in a confusing point of the game and the automatic running is going too fast for you, you can utilize a pause block by stepping on one from the floor to pause the game for a period of time. Pause blocks typically have arrows on them and they appear throughout the game. This will give you the time necessary to plan out your next move accordingly. 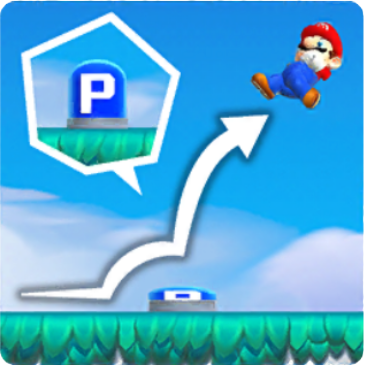 Switches may appear throughout the game and can be toggled by landing on them or performing a vaulting jump while you’re right above it. This will kick it down into place. Simply vaulting will not be enough to trigger the switch, so you should always stay on your toes. 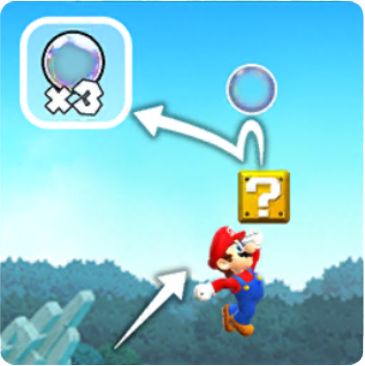 While you jump and smack “?” blocks in the air, you may occasionally find yourself with a bubble that comes out of it. The bubble will get added to your bubble total, allowing you to utilize it at a future time. 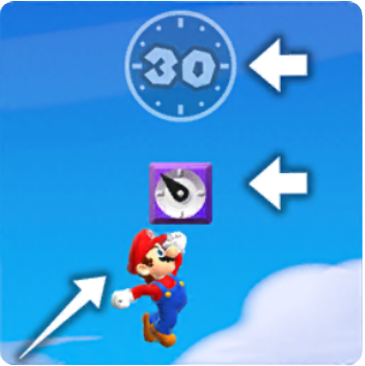 You may find time blocks instead of “?” throughout the game. By smacking one of these blocks instead, you will get +10 seconds added to your timer to give you some extra time. 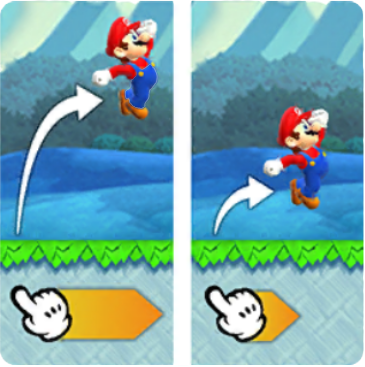 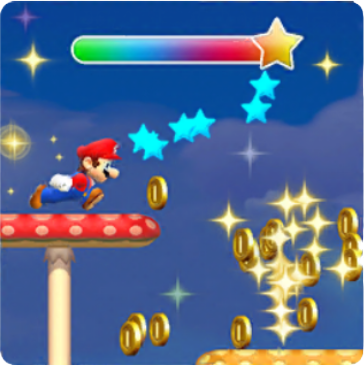 From time to time, you might experience what’s called a Coin Rush in Toad Rally. During a Coin Rush, you will get a lot more coins than you usually would from defeating enemies and smacking blocks. Take advantage of these whenever possible to get the highest score you can. 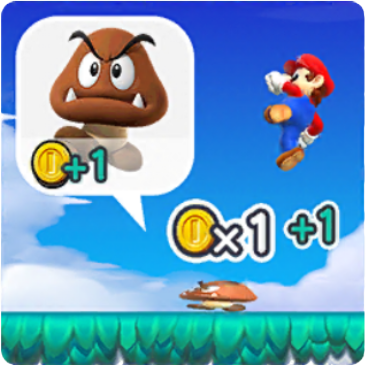 If you defeat several enemies in a Toad Rally level, you will see them level up, which in turn makes them a bit more difficult to defeat, but they drop more coins and provide you with greater rewards when you do take them out. 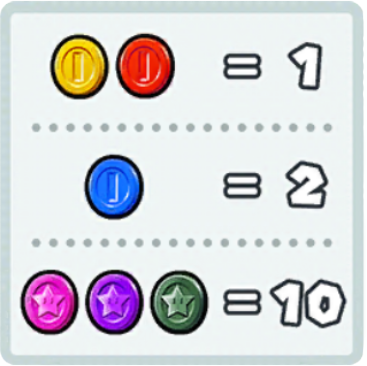 There are different kinds of coins throughout Toad Rally. They are indicated by different colors.

You should make it your priority to go after the higher-value coins, as they’ll have a positive impact on your score. 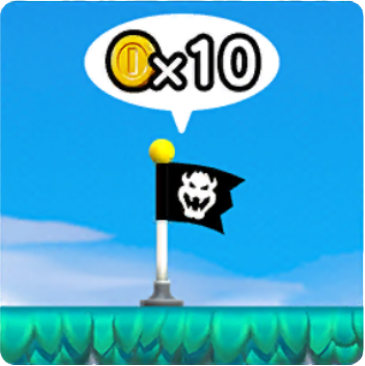 Now use these moves!

Imbued with everything you need to know about the key moves you can use in Super Mario Run, you can now go and accumulate the highest scores you can.

Super Mario Run is a free download from the App Store if you don’t already have it, but you can unlock the full functionality of the app for a one-time purchase of $9.99, which many players already appear to be deeming well worth the price.

Keep in mind that if you’re jailbroken, you will need to follow our tutorial to allow the game to run on your device, as Nintendo appears to have built in jailbreak detection to try and prevent jailbreakers from having any part in the game.

Also read: How to save battery while playing Super Mario Run

Did you learn any new moves yet? Share in the comments below!