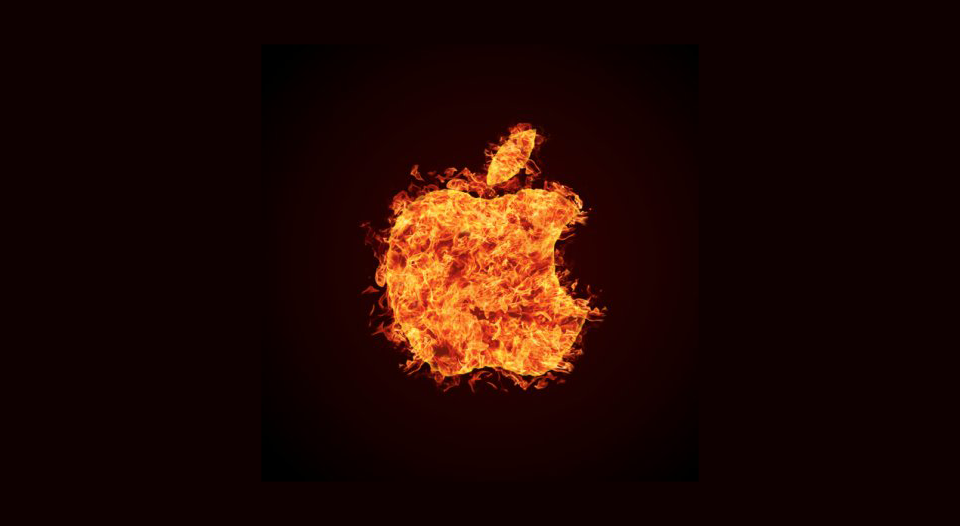 Whilst most are no doubt still eagerly awaiting a jailbreak for the just-released iOS 10.2, there are those who still have devices on various flavours of iOS 9 and older, who have fallen through the cracks of the most recent Pangu releases. For them, this week brought some hope, with two separate announcements of upcoming jailbreaking tools, in addition to the release of a browser-based tool from Luca Todesco. This round-up will cover the various pieces of jailbreak release news that came to light over the past few days.

First up, Luca Todesco released a browser-based tool for Pangu’s 9.2-9.3.3 jailbreak called JailbreakMe. The ins and outs of it have already been covered in depth here on iDB, but the take-home is that this is not a new jailbreak. Rather, it is an impressive hack which can reactivate the Pangu jailbreak after a reboot on an already jailbroken device, without using the previous certification methods. It uses a Pegasus exploit through Mobile Safari and is already up and running for those who wish to use it. For more details and a walkthrough, please consult the article linked above. 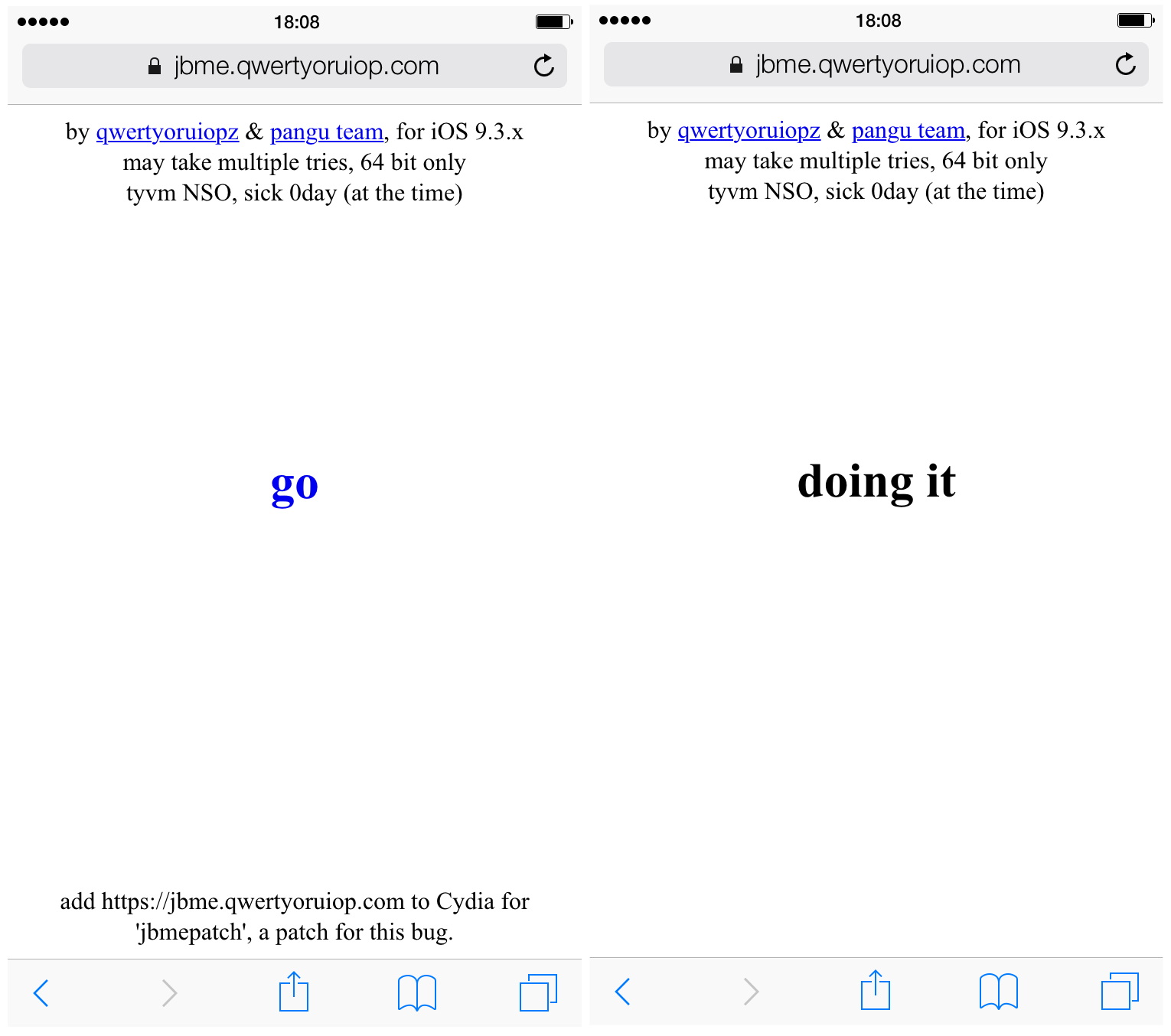 Next up is a just-announced jailbreak from @FriedAppleTeam. This will be the first tool we have seen from them and it is for iOS 8.4.1, which until now has suffered from a distinct lack of jailbreak attention. Between them, Taig and Pangu covered the entirety of iOS 8 from iOS 8.0-8.4, but until now 8.4.1 had only the Yalu jailbreak by Luca Todesco, which remains incomplete, source-code rather than GUI, and for 64-bit devices only. Interestingly, it was in relation to that project that I first came across FriedAppleTeam, as they provided several commits to the Yalu jailbreak’s GitHub, presumably as part of their research towards their own tool. A demonstration video of the team’s work can be seen below:

New iOS 8.4.1 jailbreak. 9.3.x is coming next. Learn to crawl before you learn to walk. pic.twitter.com/qSaxSiaCDm

Other details remain thin on the ground at this point, though I believe the team’s credentials to be good due to their members’ individual work and their history of contributions to Yalu. Thanks to the inestimable TheJailbreakBusters, who have apparently spoken to the team via Direct Message, a few particulars are provisionally available and are as follows:

Although some will doubtless argue that an iOS 8.4.1 jailbreak is useless at this point, I would beg to differ. I’m aware of many people who are still on 8.4.1, either through luck, caution, or a desire not to slow down older devices by moving to iOS 9/10. Owners of devices such as the iPhone 4s and iPad 2 will particularly welcome this jailbreak, as iOS 8 is the furthest that many are comfortable going on their device without sacrificing (too much) performance, and so 8.4.1 is the most up-to-date version they will get. If you did choose to keep iOS 8.4.1 on these legacy devices, you will now be able to jailbreak them and leave them there for the rest of their days, content in having hit a sweet spot between speed, security, and a jailbreak.

If you did upgrade and regret it now that there may be an iOS 8.4.1 jailbreak, there may still be light at the end of the tunnel, as some devices can downgrade back to 8.4.1 using tihmstar’s OdysseusOTA2. This is a final bonus to FriedAppleTeam’s release, and makes it more relevant and useful even now that iOS 8.4.1 is so far behind us. Some devices will always be able to go back to iOS 8.4.1, even without blobs, which will make FriedAppleTeam’s jailbreak permanently useful to some. It’s true that this process has a lot of caveats and will not be possible for everyone, but attempting it seems much more attractive now with a jailbreak upcoming.

The second release news from this week concerns iOS 9.x, and involves two different tools from separate sources. The first is none other than FriedAppleTeam again; they have alleged that their next project is a tool for iOS 9.3.x, apparently supporting iOS 9.3.4 and with 9.3.5 a possibility in future. This would be huge for people who missed out on Pangu’s tool and who stayed on 9.3.4/9.3.5 in the hope of a jailbreak before iOS 10. It would also apply to all current Pangu 9.x users because FriedAppleTeam’s offering will apparently come complete with an untether. It is not yet clear whether it will support 32-bit devices like their iOS 8.4.1 tool will.

The other iOS 9.x tool of the week came in the form of some code on GitHub, which utilises two of the Trident exploits (though not the third one which Todesco used for his JailbreakMe tool) to establish a rudimentary jailbreak. Initially just for the iPad3,1, support is now being added for other devices by respected developer angelXwind. In theory, all devices from iOS 9.0-9.3.4 can be supported, meaning 32-bit support could finally be on the way for iOS 9.0.2+ users. This is reassuring in case FriedAppleTeam’s solution does not end up supporting those devices. However, this work is much more preliminary, and presently does not have the full chain of patches, nor install Cydia, it simply gains root access. It remains to be seen whether the rest of the work will be added to give a jailbreak in the sense that the average user is comfortable with.

For now, FriedAppleTeam’s 9.3.x tool seems the better bet, even though 32-bit support is not confirmed. In its favour is ease of use and the promise of an untether. This will be well-received by those who are tired of re-activating their Pangu jailbreak and respringing after every reboot. It’s not a deal-breaker for me, but I much prefer the simplicity and completeness of a persistent untethered jailbreak. It would also allow Luca Todesco’s Pegasus patch to run constantly, offering better security than is possible at present.

The last thing to mention is that FriedAppleTeam have not commented on the possibility of an iOS 10 jailbreak so far, and may not have one in the works. Nevertheless, it is surely no bad thing to have another group of people working on these tools in terms of the overall prospect of future jailbreaking, especially given the supposed hardening of the iOS 10.2 firmware which is being reported.

Do you have an older device which you would like to jailbreak on iOS 8.4.1? Did you miss out on early iOS 9 releases and can’t wait for an iOS 9.3.4/5 jailbreak? And will an iOS 9.x untether be enough to stop you from upgrading to iOS 10?

Let me know your thoughts.