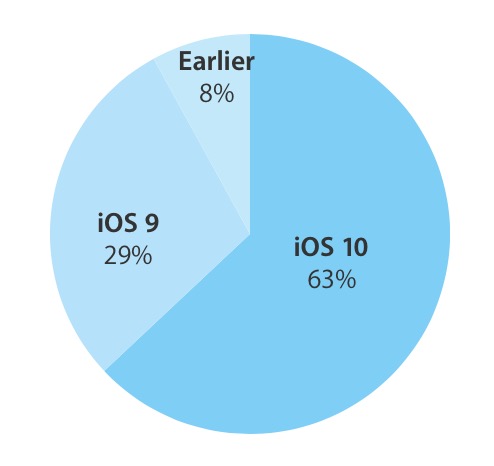 According to Apple’s own measurements, iOS 10 adoption rate has climbed to 63% of active devices, as measured by the App Store on November 27, 2016, up from 60% of devices as reported by Tim Cook on stage at the “Hello Again” Mac event on October 27.

iOS 9 went from powering 32% of devices last month to just about 29% this month. Earlier operating system versions install base has been steadily the same at about 8%.

If this adoption rate seems impressive, especially compared to Android’s adoption rate of about 1%, it is still significantly less than iOS 9’s adoption at the same time last year, which was pegged at 70%.

Interestingly enough, Apple used to update these numbers every other week but it seems to have changed this schedule to only once a month.