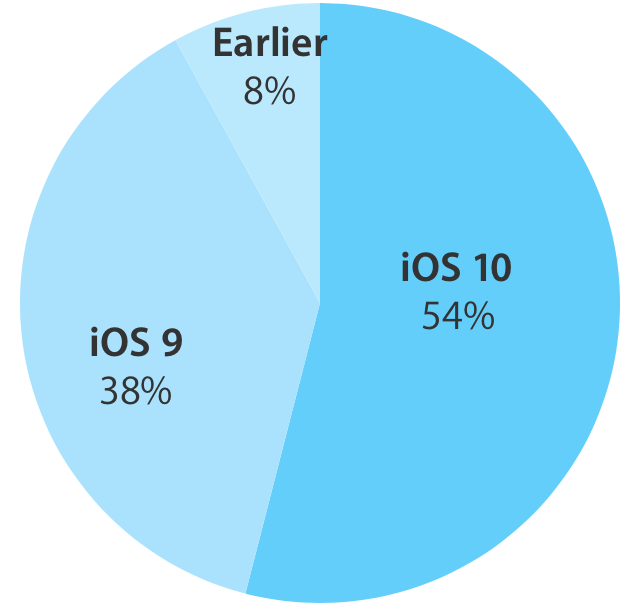 I’ve long been saying that we shouldn’t trust any iOS adoption rate “research” based on the assumption that users have on their phone specific apps which incorporate third-party tracking software. Yesterday, for instance, Fiksu and Mixpanel each estimated that iOS 10 was powering two-thirds of active devices, or about 66 percent.

Well, Apple this morning posted iOS 10 adoption rates on the official App Store dashboard for developers which reveal that iOS 10 is currently installed on 54 percent of active iPhone, iPad and iPod touch devices.

iOS 9, Apple estimates, has gone from the 88 perfect of active iOS devices that it measured in the run-up to the September 16 iPhone 7 release to just 38 percent. Prior iOS editions like iOS 7, labeled on Apple’s pie chart as “Earlier”, are currently powering eight percent of active iPhone, iPad and iPod touch devices in the wild.

The figures were derived from logs which count unique iOS devices that had accessed the App Store on October 7, 2016. Apple typically refreshes iOS adoption rate figures every other week.

In comparison, iOS 9 was installed on a little more than fifty percent of active devices less than two weeks after its release in the fall of 2015, making it the operating system with the fastest ever adoption rates.