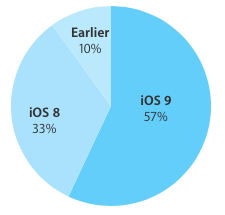 According to Apple’s own data, the adoption rate for iOS 9 has reached 57 percent of iPhone, iPod touch and iPad devices in the wild after three weeks of availability, as measured by the App Store on October 5, 2015. By comparison, it took iOS 8 nearly six weeks to zoom past the 50 percent barrier.

A total of 33 percent of iOS devices running iOS 8 visited the App Store on October 5, while earlier version of the mobile operating system accounted for the remaining ten percent of hardware in the wild.

Apple previously said that iOS 9 was being used by more than 50 percent of iOS devices in less than a week following its release, marking the fastest iOS adoption ever.

“iOS 9 is also off to an amazing start, on pace to be downloaded by more users than any other software release in Apple’s history,” said Apple’s Senior Vice President of Worldwide Marketing, Phil Schiller.

Such an encouraging adoption rate should be contributed in part to the strong sales of the iPhone 6s and iPhone 6s Plus. In addition, Apple’s latest mobile operating system isn’t riddled with bugs like iOS 8 was and contains a number of performance-enhancing and battery-saving optimizations.