DayNightSwitch is a new free jailbreak tweak that adds a little bit of character to the toggle switches throughout iOS you use on a regular basis by theming their on and off positions to reflect day or night.

It’s a very subtle change, but it’s an aesthetically-pleasing one at that.

The animated GIF below shows a close-up of the transitioning icon as you flip an iOS toggle switch between on or off:

The tweak adds a preferences pane to the Settings app where you can enable or disable the tweak on demand for just the Do Not Disturb toggle switch, or system-wide for all toggle switches throughout the operating system: 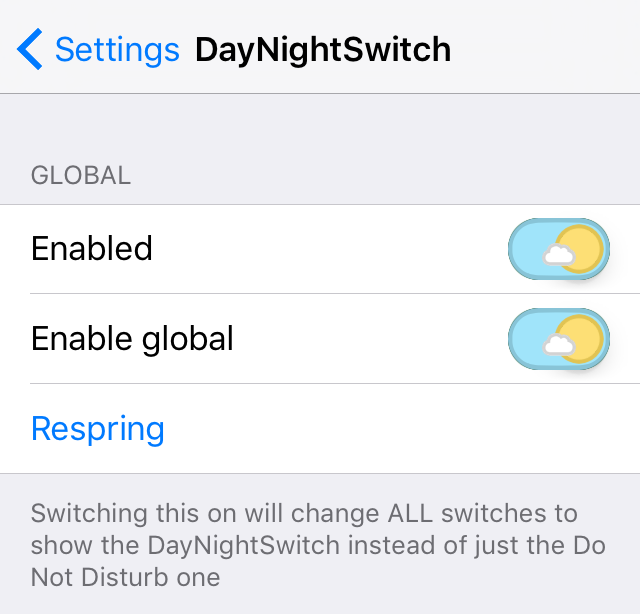 From what we can tell, the initial idea behind the tweak was only to affect the Do Not Disturb toggle switch because the little day and night theme is intended to simulate the times of the day that you’re awake or asleep.

Of course, it wouldn’t be a proper jailbreak tweak if the developer didn’t give you the choice to enable it system-wide if you wanted to, so he threw that option in there too for you viewing pleasure.

After changing the settings, simply tap on the blue Respring button to save what you’ve changed.

If you’re interested in spicing up your iOS device’s toggle switches, then check this tweak out. It can be downloaded completely free of cost from Cydia’s BigBoss repository right now, and I think you’re going to like it.

DayNightSwitch works on jailbroken iOS 9 devices; earlier versions of iOS have not been tested.