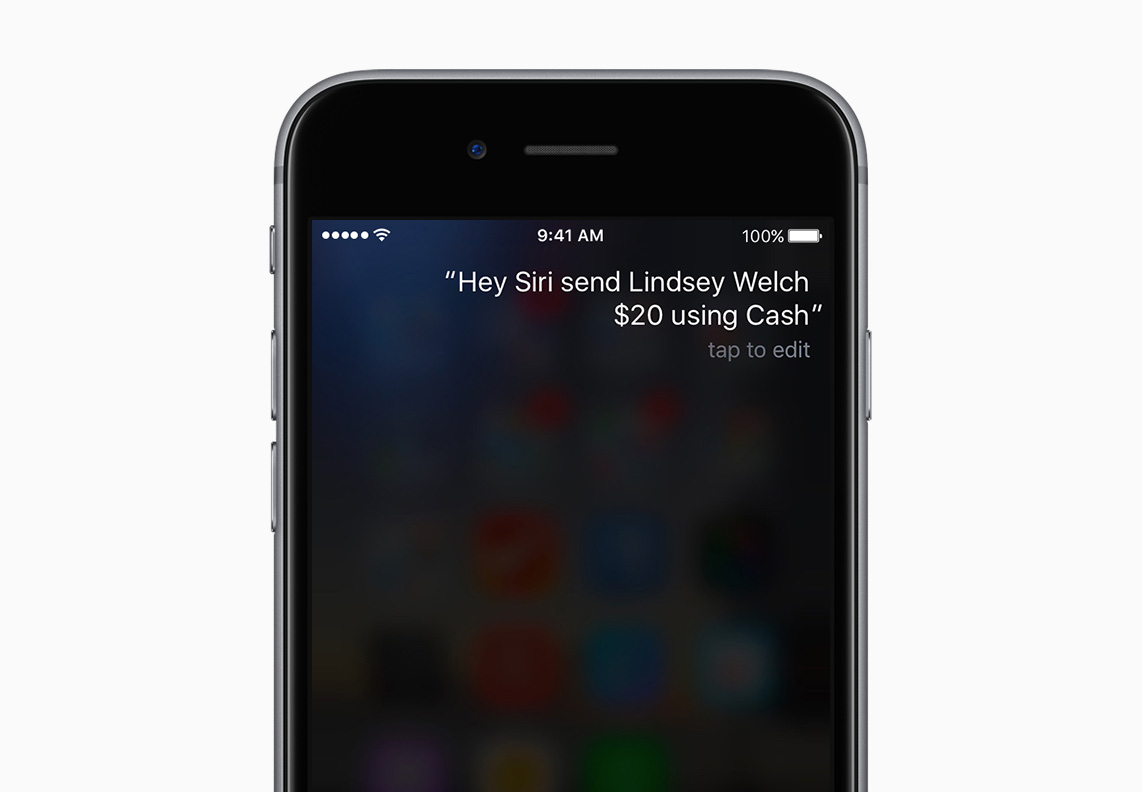 Following first hands-on demonstrations of Siri’s app integration that select developers gave to The Wall Street Journal’s Nathan Olivarez-Giles last week, Apple on Thursday published an article of its own to share more details regarding Siri integrations for payments, messaging apps and more.

As a quick backgrounder, Siri on iOS 10 will work with your apps thanks to Apple’s new SiriKit framework which was designed to help developers integrate Siri functionality into their own apps.

“Siri can already help you send an iMessage to a friend, but with the introduction of SiriKit for developers, messaging apps can now tap into the power of Siri,” writes Apple.

“You can use your voice to do things you couldn’t do before, like ask Siri to send a secure payment without ever opening an app.”

Let’s take a look at a few Apple-provided examples.

Using just your voice, you can ask Siri to send a secure payment via services like Square Cash or Monzo, without ever opening their app. Right after your request, Siri pulls up a popup sheet that displays custom branding along with important details of your request, allowing you to cancel or approve the transaction.

“With Square Cash, you can easily ask Siri to send money to a friend, whether you’re splitting the dinner bill, paying rent to your landlord or sending your roommate money for utilities,“ says Apple. Any Siri-invoked financial transaction must be first approved by resting one’s finger on Touch ID (also provided within the Siri overlay). 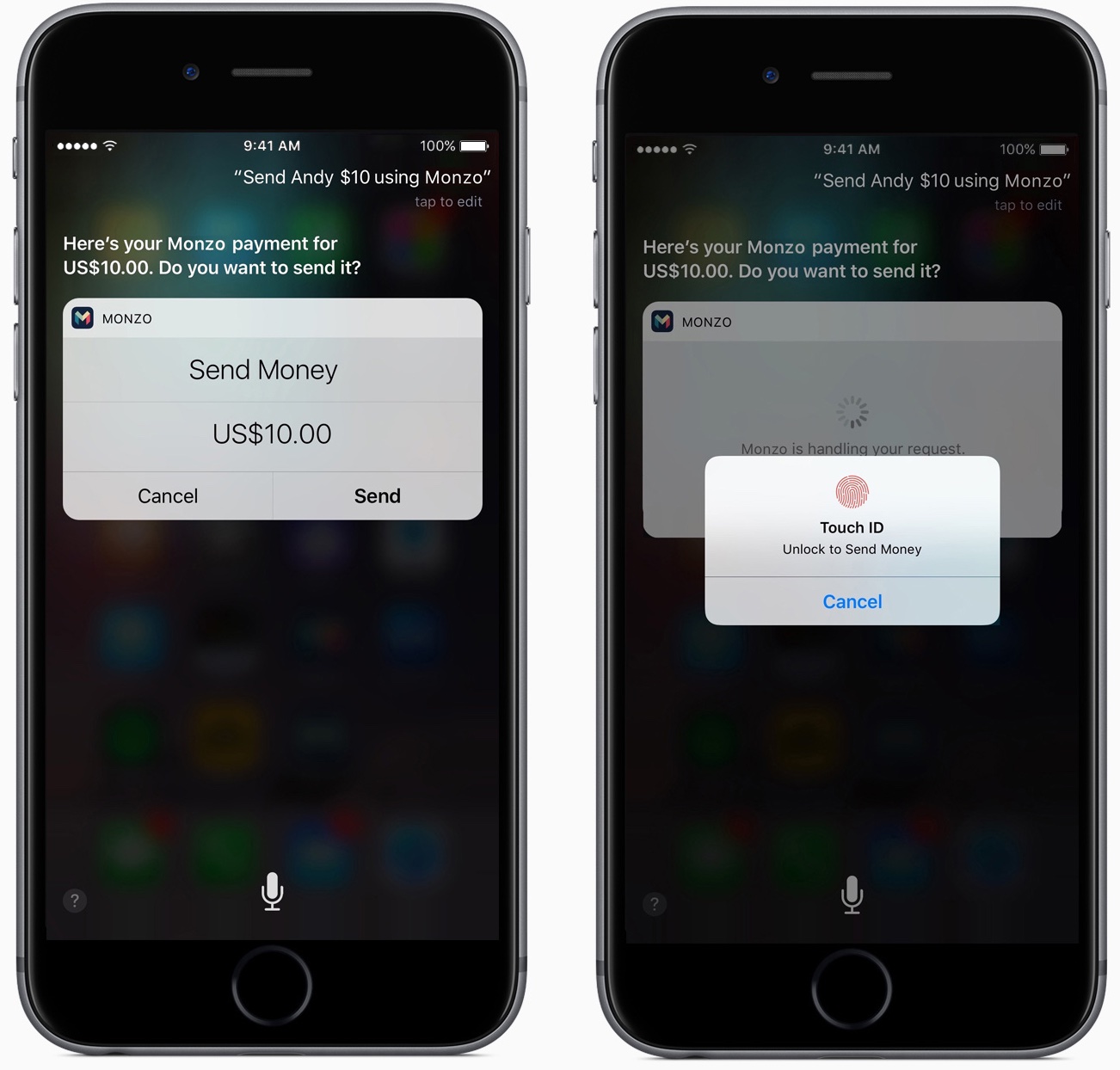 “Monzo, which aims to build a bank of the future for people who hate banks, will let you ask Siri to send payments to fellow Monzo users, authenticating them with the touch of a finger with Touch ID,” according to Apple’s post.

In true Apple fashion, voice interactions with your apps happen within the context of Siri’s user interface. For instance, asking Siri to “text Mom on WhatsApp saying I’m gonna be later for dinner” brings up an overlay complete with WhatsApp branding, custom layout and your transcribed message rather than take you to WhatsApp. 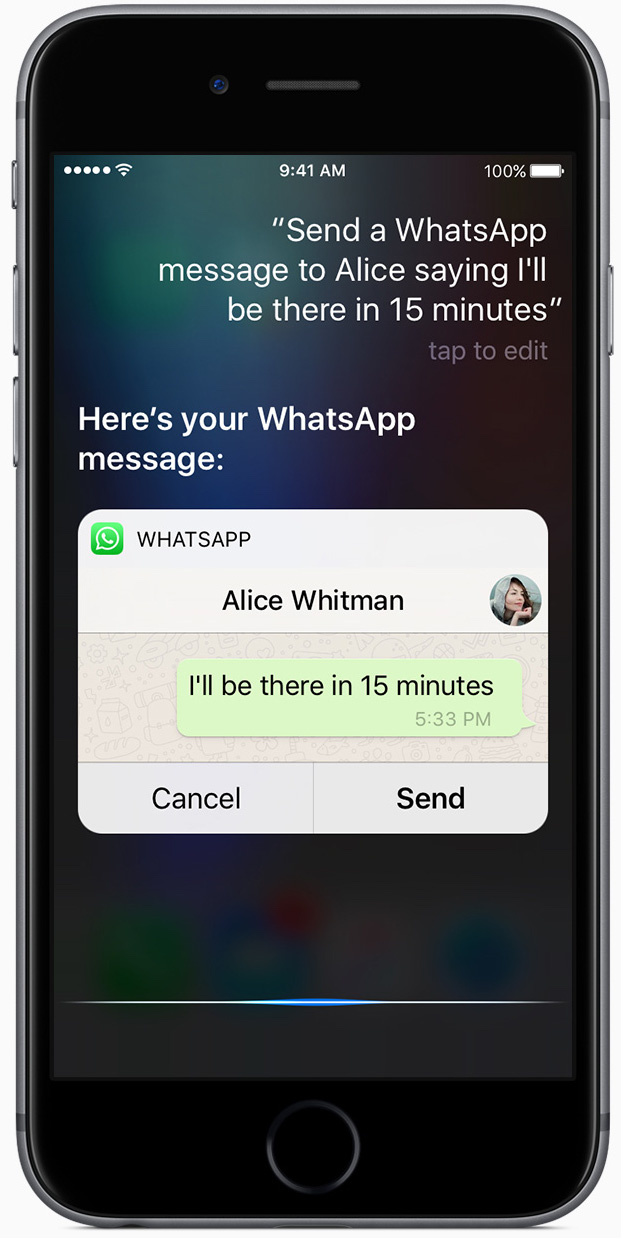 “WhatsApp will use Siri to make its messaging experience even better by letting you send WhatsApp messages to family and friends without typing a single letter,” says Apple. Here’s yet another example— LinkedIn

LinkedIn’s mobile app is irreplaceable if you’re looking to accelerate your career, even more so knowing messaging has become an important part of LinkedIn—conversations are, after all, core to helping you stay connected and informed. 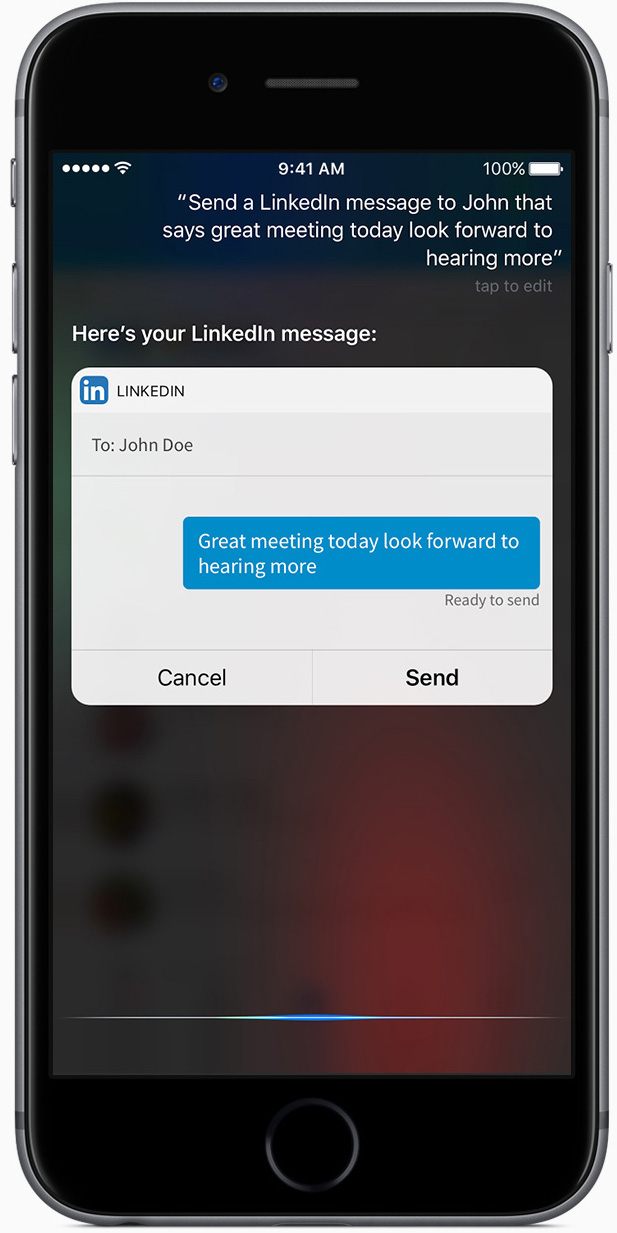 When iOS 10 drops this fall, you will be able to use Siri to easily send a message to anyone in your network—again, without typing a single letter or being yanked out of whatever app you were using.

Some of the apps that will support Siri integration at launch include WhatsApp, LinkedIn, WeChat, Pinterest, Vogue Runway, Pikazo, Square Cash, Monzo, Slack, Looklive, Lyft, Fandango and The Roll.

Keep in mind that users who run iOS 10 betas cannot yet check out Siri’s third-party app integration themselves because Siri-enabled app updates are not permitted to go live on the App Store until iOS 10 releases for public consumption this fall.