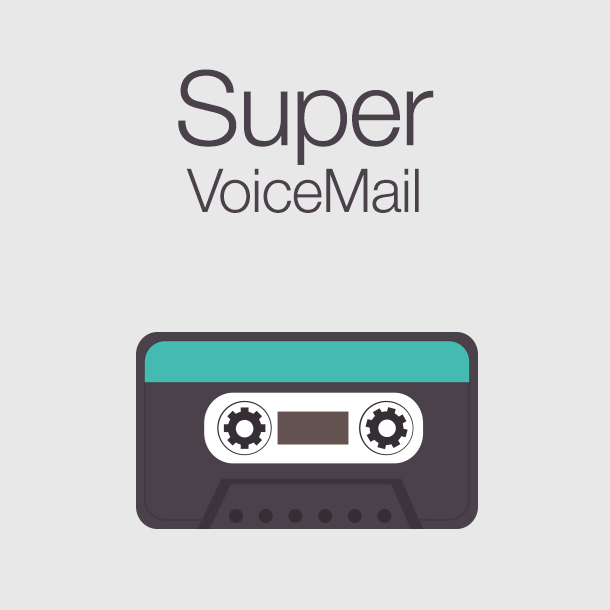 Just last week, we showed you a jailbreak tweak called AnsweringMachine that took the jailbreak community by surprise and showed us that the iPhone’s voicemail system has a lot to be desired. On the other hand, another new release called Super VoiceMail also looks very promising.

In this review, we’ll show you what Super VoiceMail has to offer and help you decide which of the two jailbreak tweaks you should go with.

Two great tweaks, but which to choose?

Alright, I’ll begin this review with a comment of my own. I know both of the developers are senior developers in this jailbreak community that have been around long before I even started jailbreaking, so both have been created with love. As a result, it pains me to say that both tweaks are very solidly built and it’s going to be hard to choose.

On the other hand, the places where I will focus this review are on features, looks, and price. But first, let me give you a quick glance at what you’re getting with Super VoiceMail. Hopefully, by the end of this review, you’ll be able to decide which one you should go with.

When it comes to big jailbreak tweaks like this, the first thing I like to do is go through all of the features and show you what it can do. On the other hand, to keep things short and sweet, I’ll only be covering the largest features in-depth.

To start, Super VoiceMail adds a new app to your Home screen that allows you to manage your voicemails. Below, we show you what the app looks like when you have no voicemails, and when you have some: 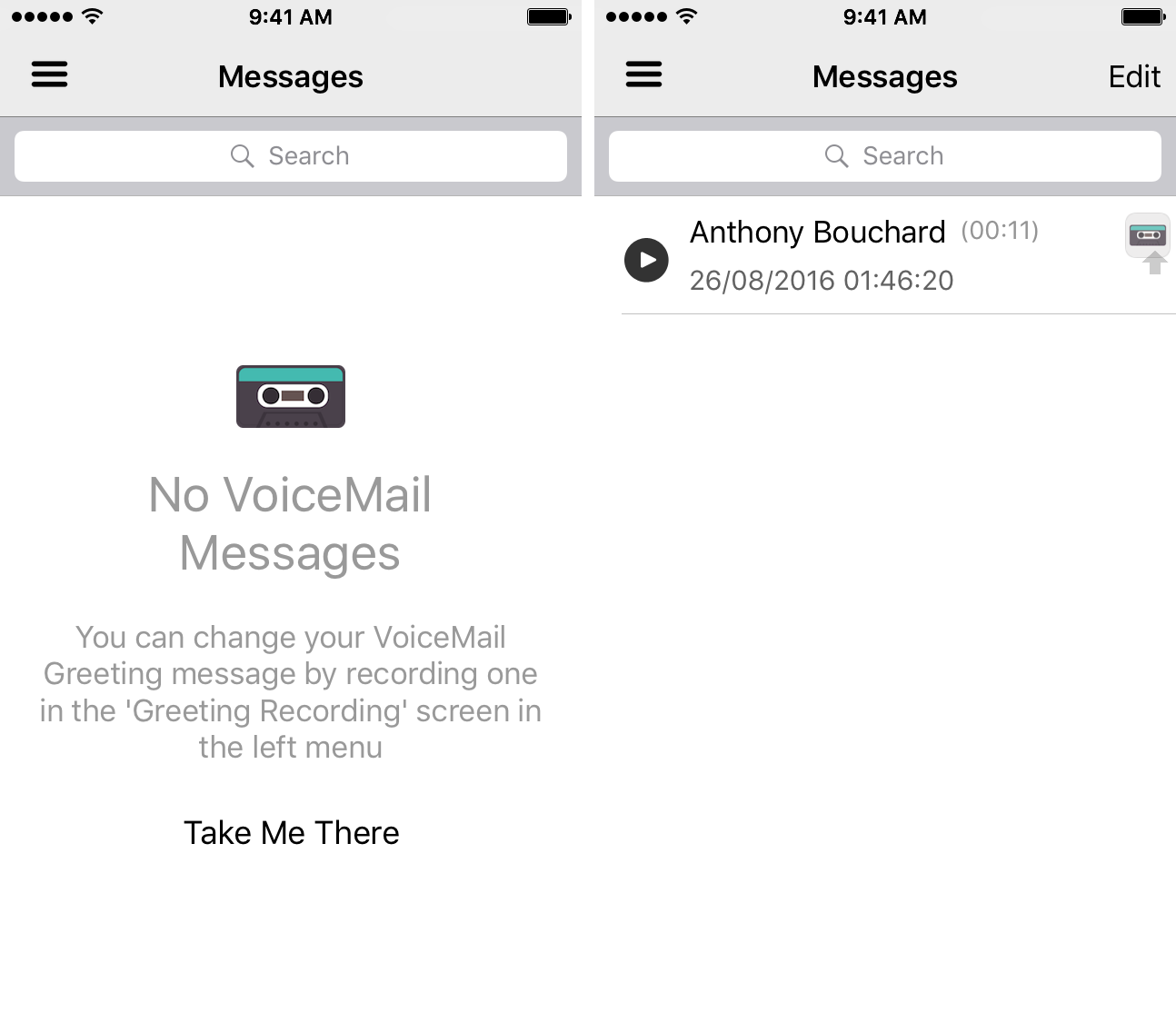 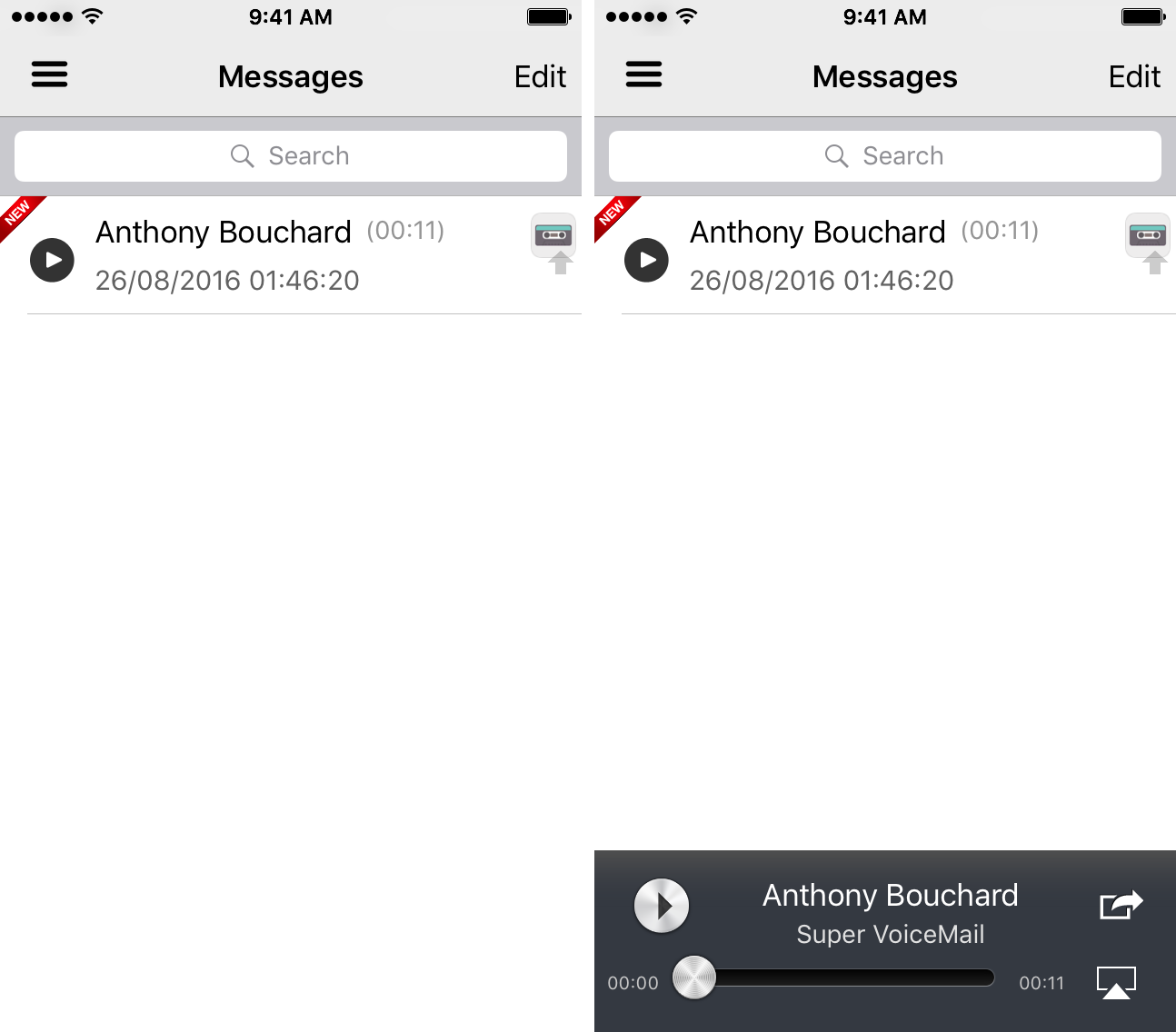 The app also has a sidebar that you can open to access settings and more features: 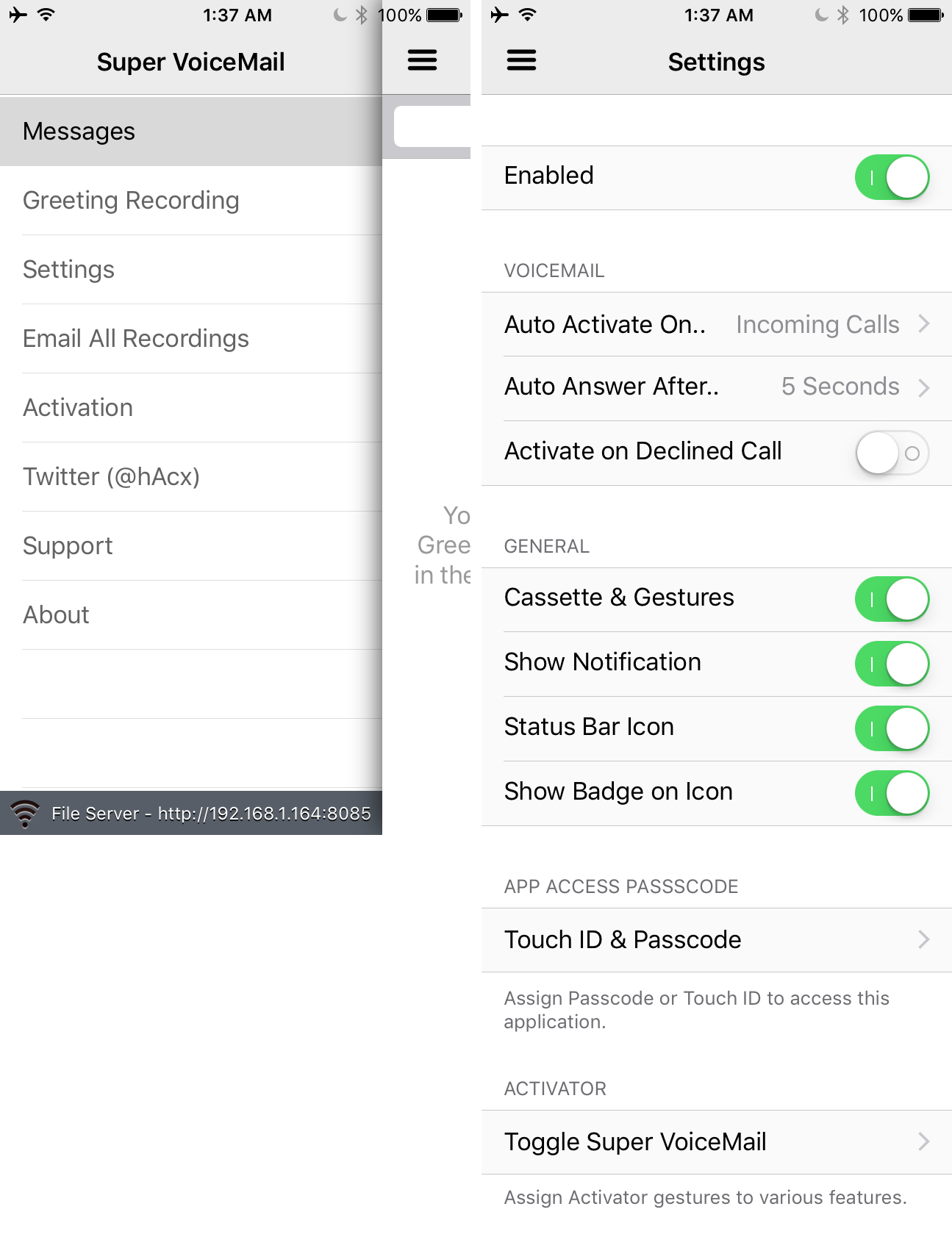 You’ll see that the sidebar includes not only settings, but also a way to email your voicemails to yourself or someone else, a way to change your greeting recording, and more.

In terms of settings, you get a lot of useful features you can take advantage of. Those include the ability to Touch ID/passcode-lock the app and use Activator gestures.

More things you can do, which both tweaks seem to support, are allowing the tweak to kick in when you decline a call, having a badge notification when you have a missed voicemail, choosing an auto-answer time, and having banner notifications among others.

The banner notifications look as follows: 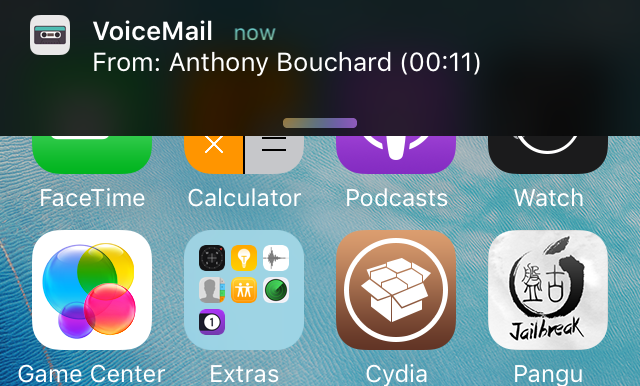 Take note that a voice transcription feature is not currently activated in Super VoiceMail, although the developer does say that the tweak already has the code to do it, but hasn’t been finalized yet as he is still adding finishing touches to it. When complete, a future tweak update will enable the feature.

When you want to set up a greeting, you can either use your own voice, or you can use Siri to synthesize a text-to-speech greeting, similarly to AnsweringMachine: 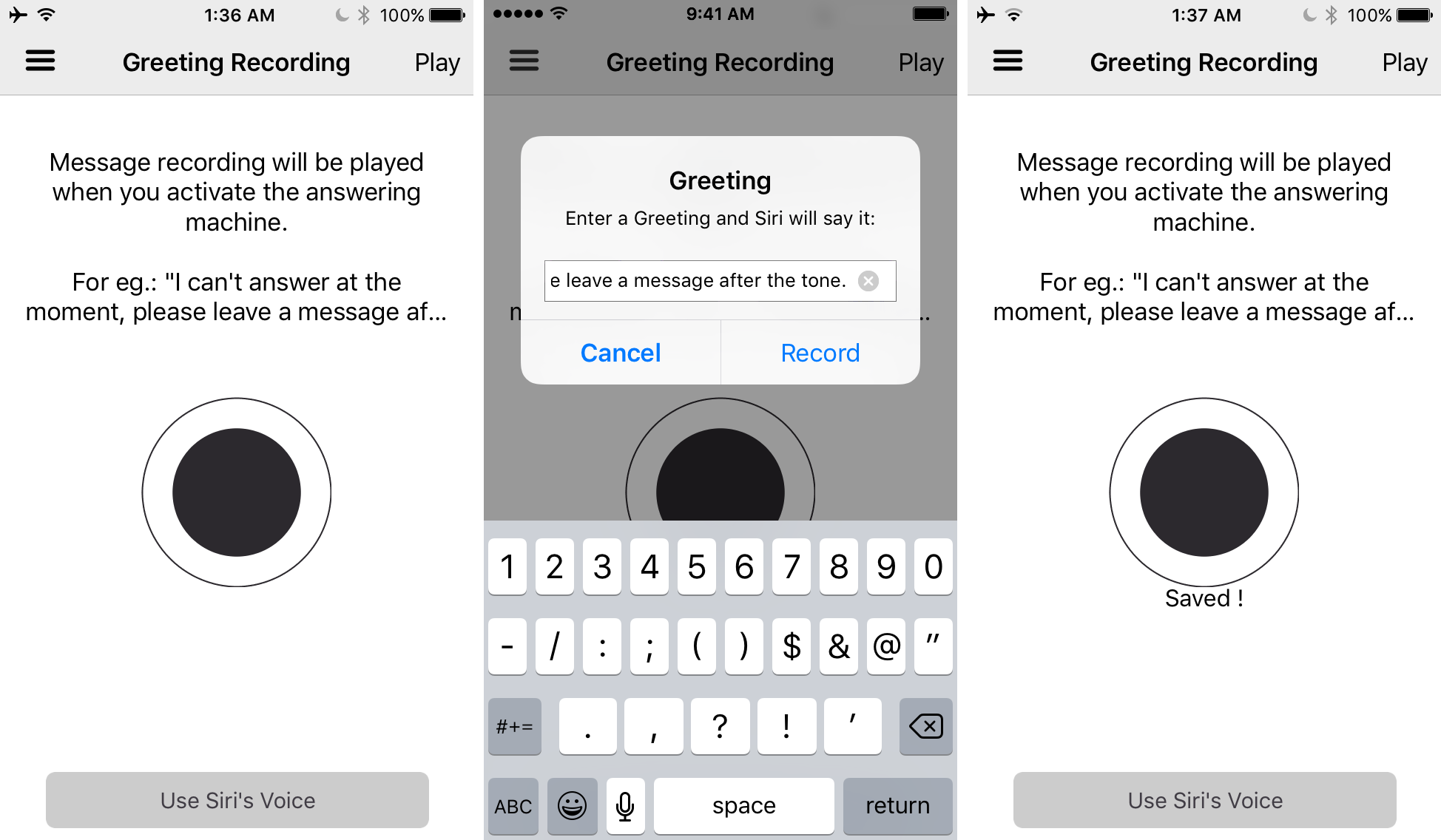 I had tested out the Siri voice feature, and it came out very crisp and clear on the other line. One thing to keep in mind however is that iOS does not auto-correct typos in the greeting text field shown above, so be very careful to spell everything right.

Now for the experience; when someone calls you, your screen is going to look like this: 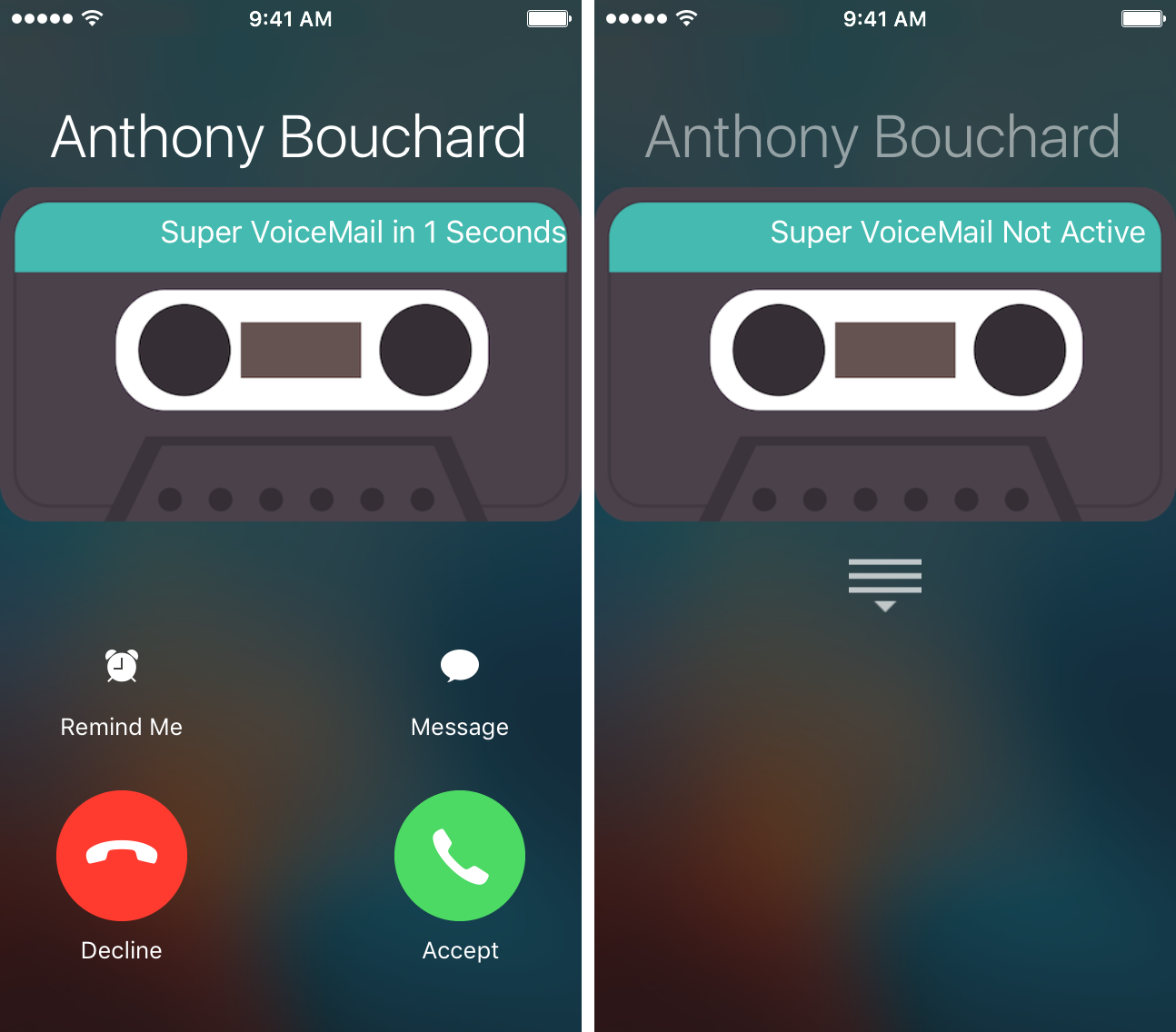 The screen is filled with a very aesthetically-pleasing cassette tape visual, as well as information about what’s going on. You can answer the call, or it will go to Super VoiceMail.

As far as both tweaks are concerned, they’re both premium tweaks. Here are some of the things Super VoiceMail has right now that AnsweringMachine does not:

On the other hand, here are some of the things AnsweringMachine does right now that Super VoiceMail does not:

But to be fair, both tweaks offer all of the following settings in the same way:

Now that you’ve seen most of the core functionality of Super VoiceMail, it’s time to move on to aesthetics.

The cassette tape visual when someone is calling just looks nice to me, but even the app looks like it was built with a lot of love. You can tell when you use the app and see the interface in all of its glory that the developer spent some time to really polish it and make it easy to navigate.

In terms of the playback, one thing I thought was odd was how the Super VoiceMail app’s recording player looked iOS 6-esque, which to me looks a little cheesy on the iOS 8+ operating system. AnsweringMachine used a modern iOS 7+ playback aesthetic.

With pros and cons to both tweaks’ aesthetics, it’s really a matter of preference.

Now to get to the niddy griddy; the price. For some people, price is everything; for others, features are everything. We’ve already talked features, so now we’ll talk price.

At the end of the day, I always say that whichever tweak has all of the options you need and can be had for the lower price is the way to go. Of course, in some cases, both tweaks have features you want, but the other doesn’t have it, so you may have to make compromises.

AnsweringMachine set the playing ground with a price tag of $3.99, however it was a tweak that you could purchase directly through Cydia. Super VoiceMail is priced at $2.99, but it has a different kind of purchase system. The tweak is a free download from Cydia, but after you download it, you are asked to activate the tweak by paying the developer and receiving an activation code.

One thing where this gets in the way of user convenience is that because AnsweringMachine is tied to your Cydia account, you can download it on multiple devices and use it on them simultaneously. Super VoiceMail, on the other hand, lets you register one device per activation code at a time, so you would have to purchase it again and again for each of your devices, or you would have to move the license from one device to another.

For some, these third-party activation systems are not exactly appealing, however they do prevent piracy a lot more than your run of the mill paid tweak might.

Super VoiceMail is a wonderful new way to handle voicemail on your iPhone. At the end of the day, whether you should go with AnsweringMachine or Super VoiceMail is a question only you can answer based on your feature needs, but I can definitely say it’s a touch choice for me personally.

If you want to give Super VoiceMail a try, you can download it on your jailbroken iPhone from Cydia’s BigBoss repository right now, but keep in mind that there’s a $2.99 fee to activate your copy with a special license code. The tweak works on iPhone 5 and newer with iOS 8.0 or later installed on it.

Let us know which tweak you prefer in the comments below!