iOS’ voicemail system has always had a lot to be desired. On the other hand, a new jailbreak tweak called AnsweringMachine aims to fill all the gaps that users have wanted for the iPhone for ages.

In this review, we’ll talk about what you can do with AnsweringMachine and show you why it’s a significant upgrade from the stock voicemail system.

Voicemail how you want it

With AnsweringMachine, you can actually use voicemail exactly how you want to. It comes with a slew of features and customization settings so you can tailor it to your own needs, and best of all, everything works seamlessly with your stock phone call system on your iPhone.

AnsweringMachine bypasses the voicemail system you have built into your Phone app, and when you install the tweak, you’ll get a new app on your Home screen where you can access all future voicemail you will receive. You can even listen to voicemail as they are being recorded without having to answer the call, which I think is an amazing feature. AnsweringMachine will even work with both phone calls and FaceTime Audio calls.

As another plus, the AnsweringMachine app icon displays badges when you have missed voicemail and you even get banner notifications that try to transcribe the voicemail into text when a new voicemail is received: 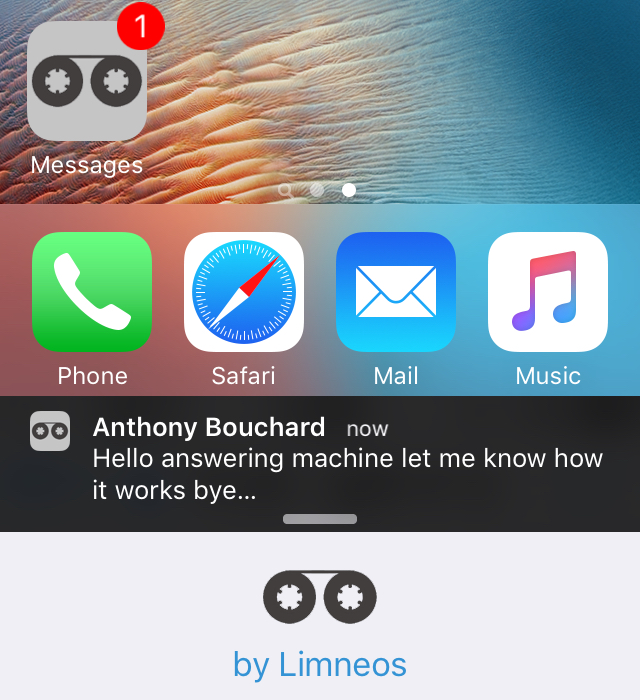 The voice transcribing feature is really cool because it lets you see a preview of what was left in the voicemail, but it’s worth noting that the transcribing feature isn’t perfect. For it to work, the person needs to speak very clearly, and it still doesn’t show any punctuation. Nevertheless, it helps you get the gist of what someone was trying to say before you go in and listen to the voicemail.

Transcribed voicemail is a feature that will be coming in Apple’s public iOS 10 release this Fall, and it probably works better in iOS 10 than it does in this jailbreak tweak because Apple has unlimited resources at their disposal to make their software perform seamlessly with everyday life.

Nevertheless AnsweringMachine’s voice transcribing feature works good enough for what it is and it gives you a gist of what someone may have said in the message. For the most part, the interface even looks similar to that of iOS 10, apart from the fact that the app uses a transparent background instead of the traditional white that we see in familiar interfaces from iOS 7 and later.

When you do want to listen to your voicemail again, you can launch the AnsweringMachine app from your Home screen and you’ll see the following interface: 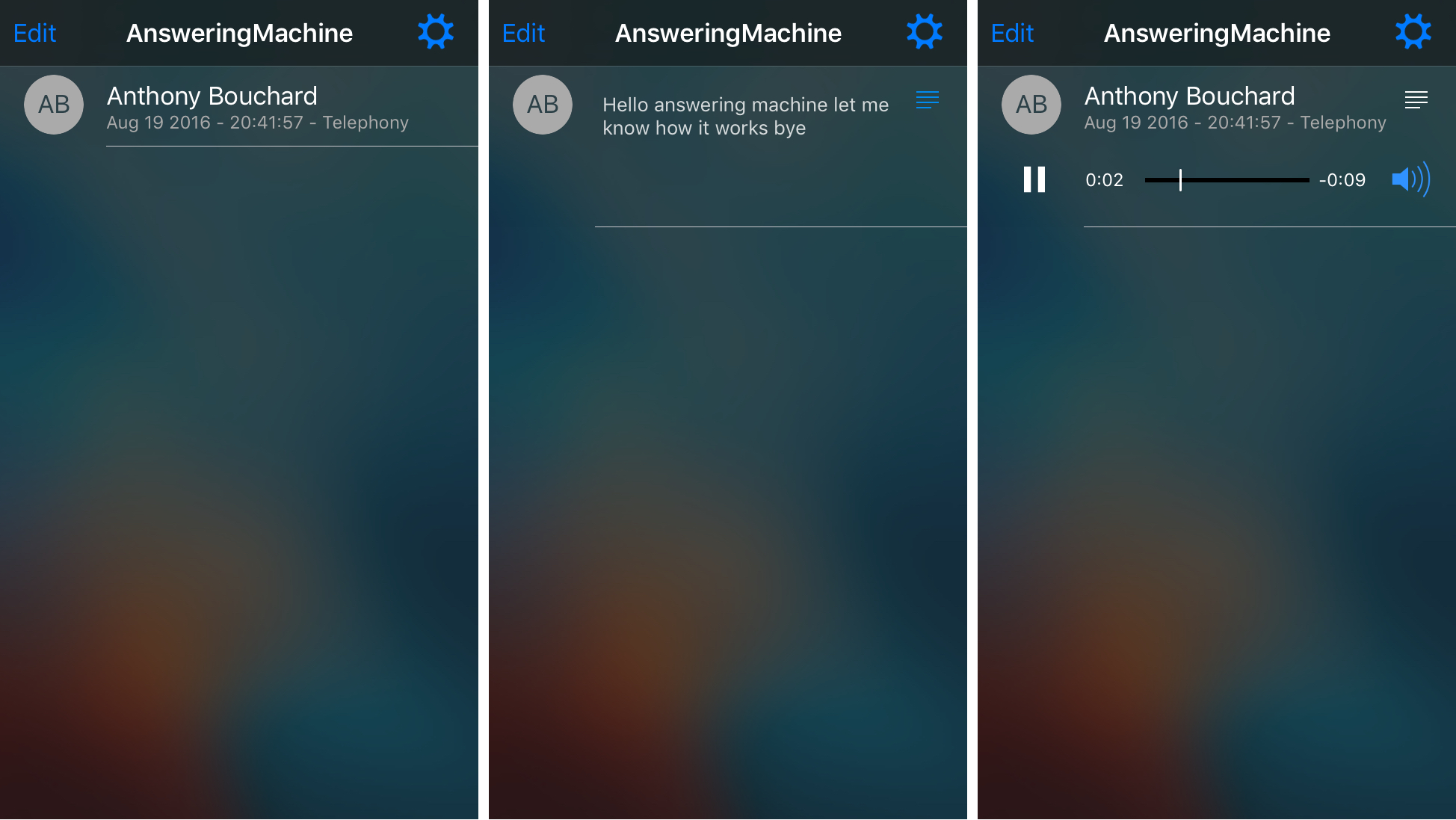 All missed voicemail show the name of the person they’re from, as well as the date and time it was received. When you tap on them, you will get a voice transcribed message that shows the message in text, and you can also play the voicemail.

At the top left of the app is the Edit button, which you can use to delete any individual voicemail from your history, and at the top right of the app is a shortcut for getting to the tweak’s settings, which are found in your Settings app.

About those settings… yeah there are quite a bit. The idea here is to give you the voicemail experience you actually want. As a result, there are a number of things you can tweak and tinker with to get the results you want.

From the main preferences pane, you can toggle the tweak on or off on demand, set up the greetings the caller will hear upon needing to leave a message, configure the notifications you get when you get a new voicemail, configure remote commands, and control whether the tweak is used when Do Not Disturb is enabled or when you decline a call instead of letting it go to voicemail on its own.

We’ll go through the sections of the settings for you below:

To make your own greeting, you will go into this section. You can have a synthesized greeting that uses the same voice Siri does (Samantha), or you can add your own voice to the greeting to make it more personal. 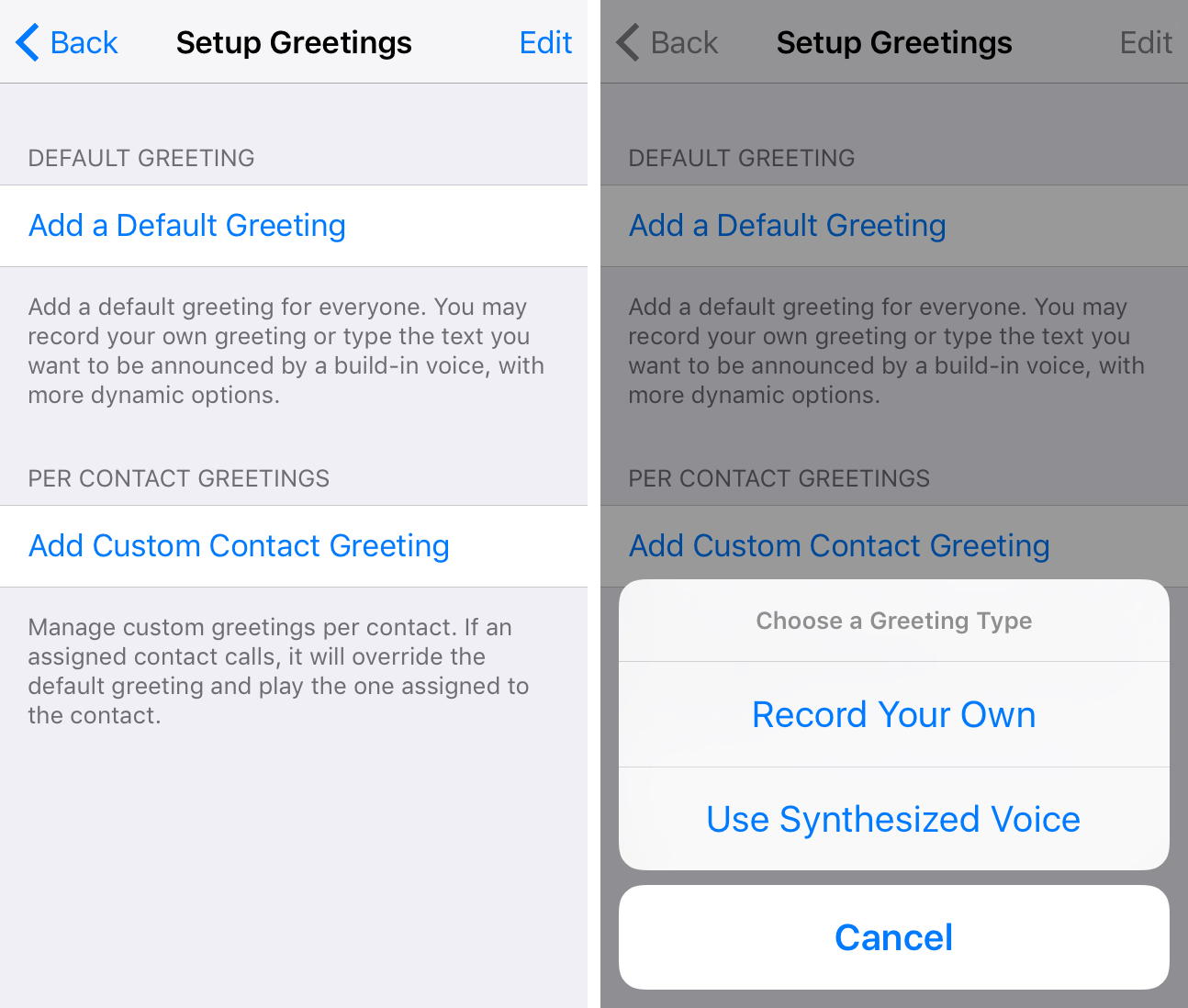 When you set up a greeting, whether you’ll be recording your own or using a synthesized voice, keep in mind that this is what the caller is going to hear right before they leave a message. 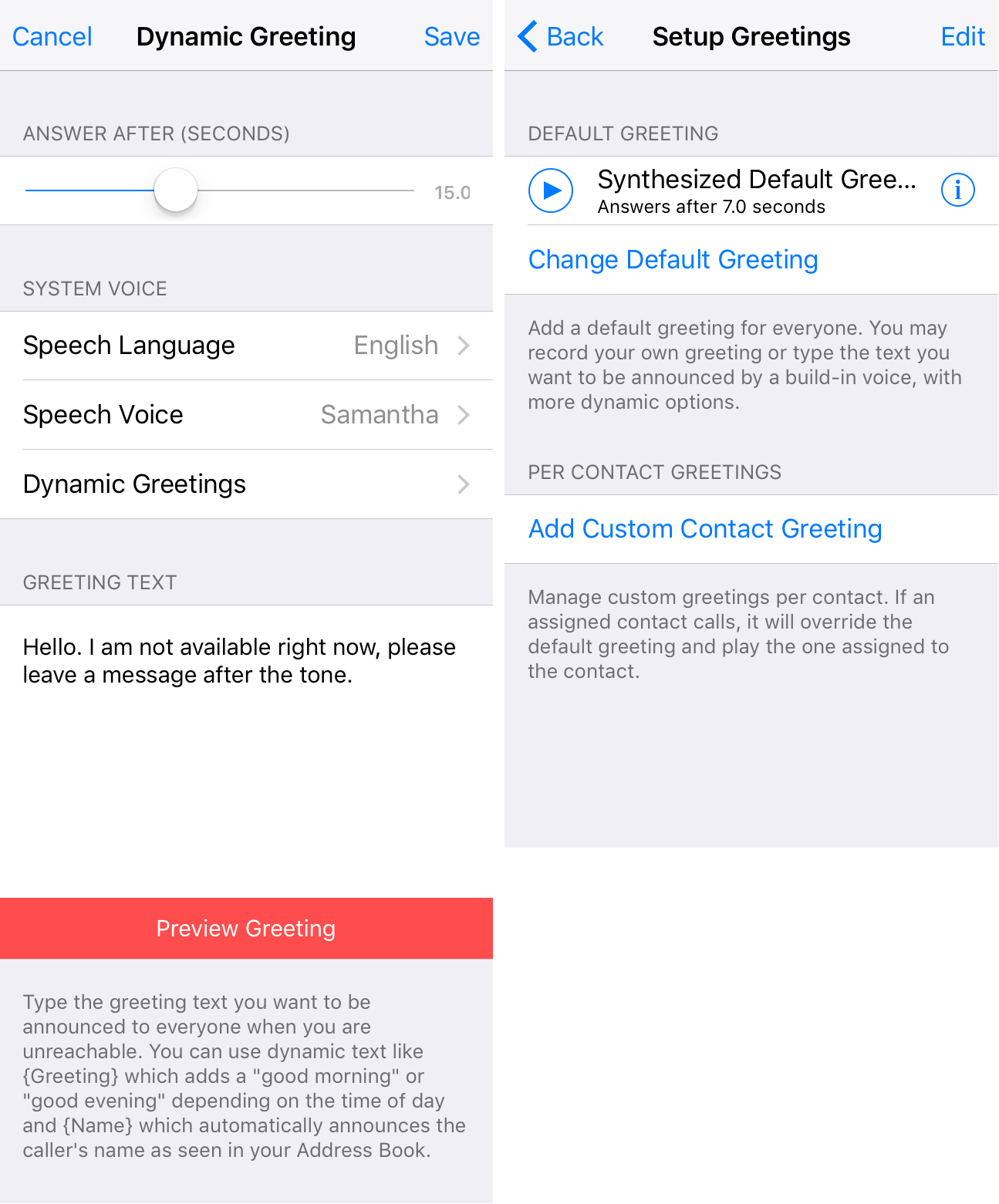 When you configure the synthesized greeting, there are a number of options you can play with. One of the things you’ll see right off the bat is that you can set a default greeting that everyone gets all of the time, but you can also set up a per-person greeting that only specific people will get.

There are also a number of other sub-settings you can change. Among those are:

Another section of the tweak’s settings deals with the notifications you get. 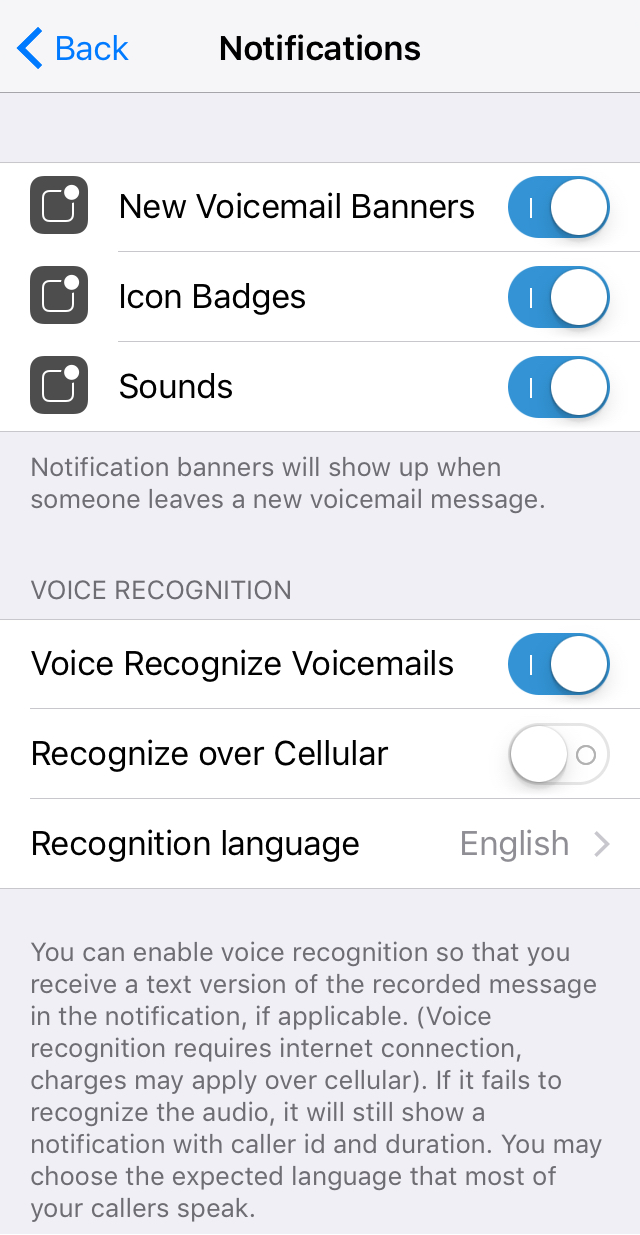 Apart from the obvious of being able to configure whether or not the tweak leaves badges, banner notifications and makes sounds, the tweak also comes with some settings for the voice transcribing feature. Those are:

The cellular option is good for anyone who has a capped data plan and wants to reduce internet usage, but for those who want privacy, disabling the notifications altogether keeps nosy people from figuring out what your voicemail was all about right from the notification banner.

With the Remote Commands feature, you can call your phone from another phone and use DTMF (Touch Tones) to listen to your missed voicemail, which is useful if you have more than one phone. You can also perform commands for deleting voicemail and more with this feature. 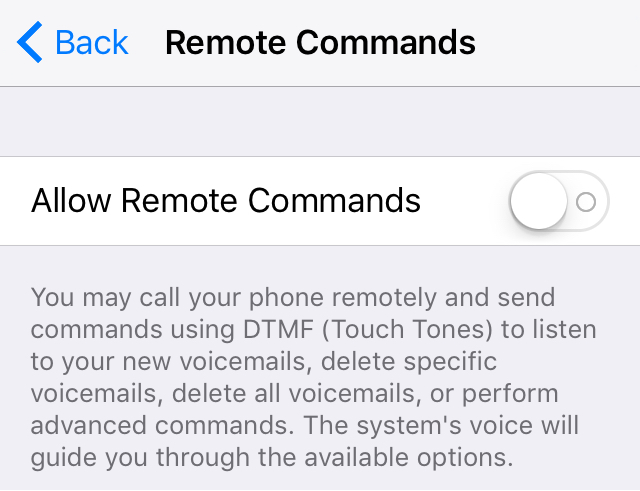 If you don’t know how to use DTMF, you may want to leave this feature turned off.

In my opinion, this is probably one of the coolest jailbreak tweak releases this year. It seriously improves the practicality of using your iPhone as an everyday carry phone.

These are features that we could only dream of being in the Phone app on a stock iPhone, but now, thanks to the jailbreak community, we can have it on jailbroken iPhones.

With all of the flexibility that it gives you for crafting your voicemail how you want it, I think it has the potential to make that semi-untethered iOS 9.3.3 jailbreak worth it.

To make sure that your callers are greeted with the best possible greetings when they want to leave a voicemail and to get the most you can out of your voicemail before iOS 10 drops this Fall, I think AnsweringMachine is a great option because of all the features it has to offer.

The tweak can be downloaded on your jailbroken device from Cydia’s BigBoss repository for $3.99, and trust me, if you use your iPhone a lot for taking calls, you will not be disappointed.

Let us know in the comments what your thoughts are on AnsweringMachine and whether or not you wish your iPhone had these kinds of features out of the box.