You cannot find it mentioned in release notes accompanying the most recent Instagram update which brought out a new Snapchat-like Stories feature, but either that or an earlier update has quietly added a much-needed Drafts feature to the popular mobile photography app.

Called by some fans the best feature that has happened to Instagram in quite a while, Drafts lets you save the photo you’re currently editing as a draft.

This is quite useful, if not essential, in case you just spent your time making detailed edits to a photo, but ultimately decided not to post it until later.

To get started, launch Instagram and take a photo with the built-in camera or load an image from your photo library. Then, make some non-basic edits by tapping the Edit button, like adjusting contrast, applying a filter and more.

Fell free to write a caption and even add tags as these, too, are saved in Drafts.

Now instead of tapping Next, hit the back button to return to your Instagram feed. Up should pop a prompt offering to keep the post in Drafts or discard it altogether.

“If you go back now, your image edits will be discarded,” reads the message.

Tap Keep and the post will go straight into Drafts letting you revisit it later, or hit Discard if you wish to forget all the changes you just made to the image.

Drafts are saved locally on the device, not on Instagram, and can keep multiple unfinished posts. Any saved drafts appear at the top of your Camera roll, under the Drafts heading, when accessing your photo library in Instagram. 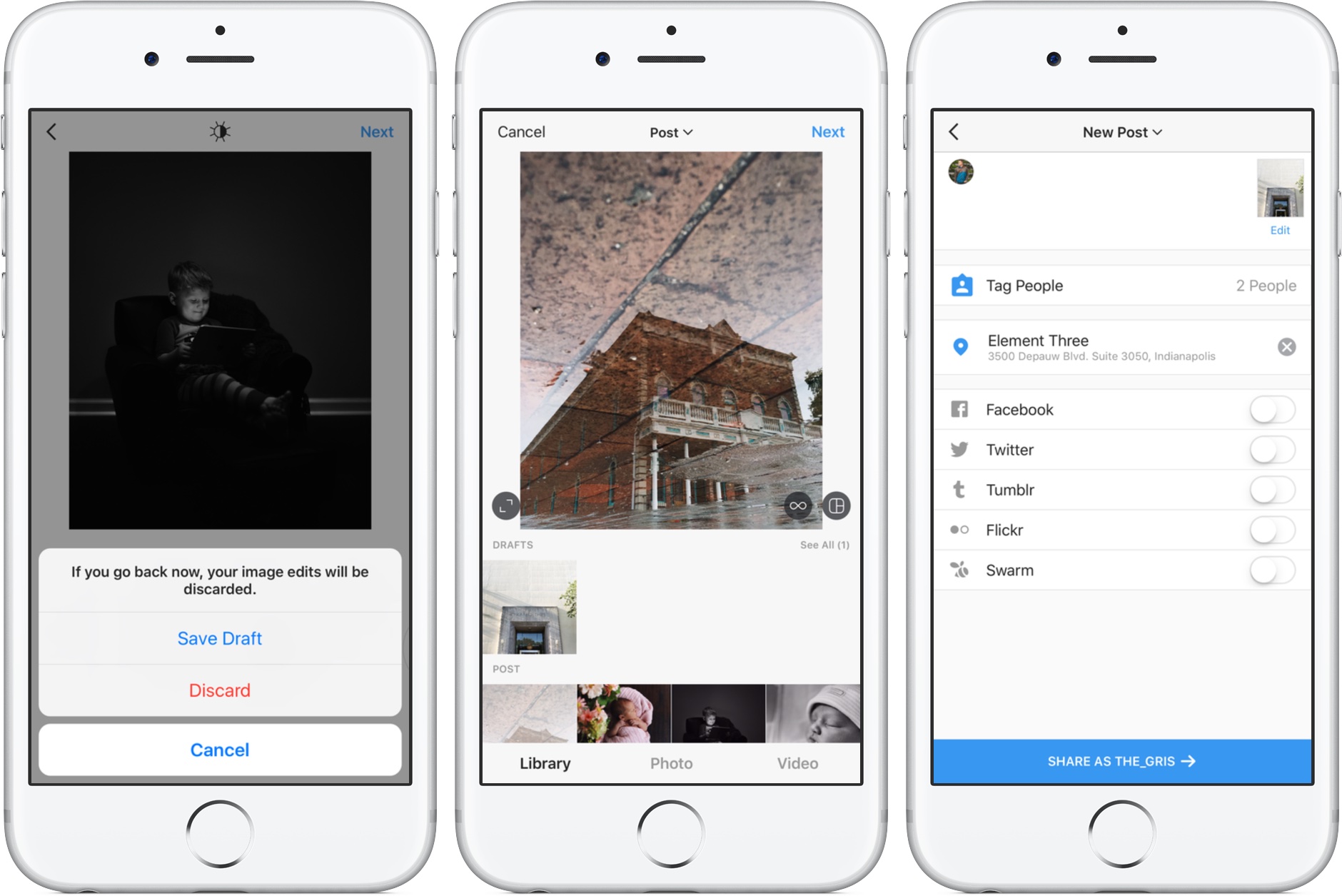 And just like that, you can now save your edits, captions and tags in Drafts and finish working on any unfinished posts later, at your convenience.

It’s unclear when this feature was introduced.

I found at least one blog post about it dated mid-July and a Twitter search for “Instagram Drafts” indicates that some people have had Drafts for weeks now. Instagram’s Help Center doesn’t even document this handy feature.

If you don’t have Instagram Drafts yet, it’s possible that the company is either currently quietly testing the feature with a subset of its user base or has begun a staggered rollout a couple weeks ago, in which case Drafts will gradually roll out to everyone over time.

At any rate, one significant pain point with Instagram has been removed…

Instagram is available at no charge from the App Store.