Pokémon GO, the popular new GPS-based Pokémon-catching app for mobile devices, received an update over the weekend that made many changes in the game, both big and small.

One of the biggest changes was the removal of the Footsteps feature, which made tracking Pokémon easier. But in addition to the removal of Footsteps, it seems that Niantic is working to end real-time Pokémon tracking tools to prevent cheating.

The end of real-time Pokémon tracking?

Niantic is working hard to shut down third-party apps like the popular PokéVision website to reveal the locations of Pokémon and their spawn times based off of information from Niantic’s server.

As a result, PokéVision is now “currently unavailable,” as the website states when you try to load it. Similar services are also experiencing the same downtime, and it’s not expected that they’ll be coming back online due to new restrictions.

Some have tried reaching out to the service and have had success getting replies, but they seem very hesitant to discuss what the reasoning was for shutting the service down. Nevertheless, they “hope” to be up and running again in the future, but make no guarantees. 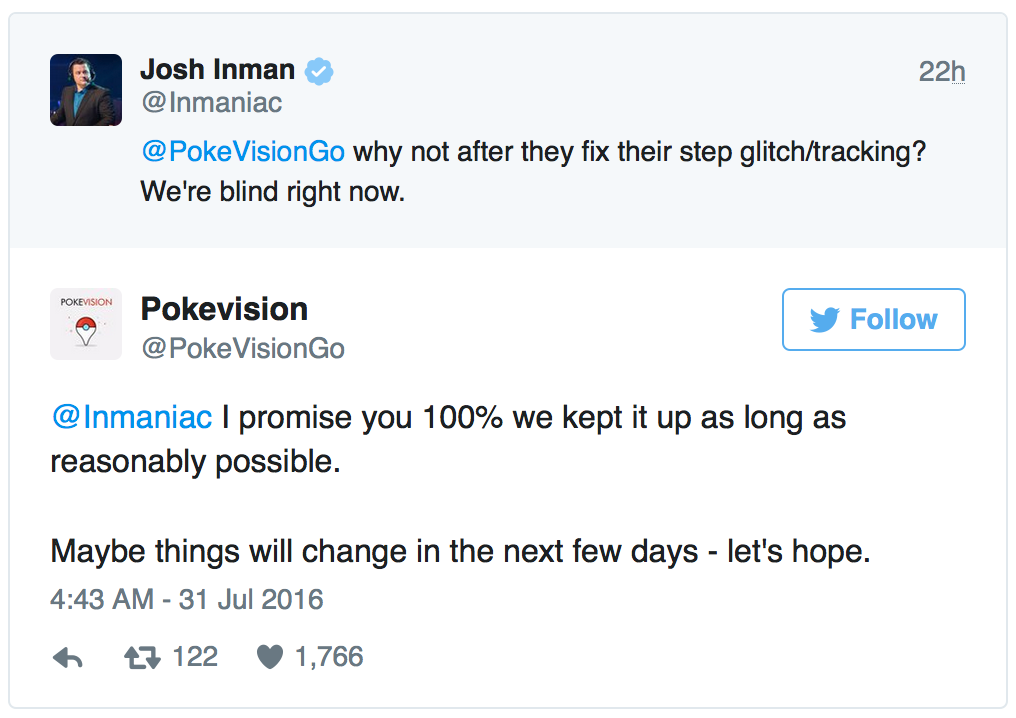 Some Pokémon-tracking apps, on the other hand, are completely crowd-sourced, and this means people can tag Pokémon in certain locations and then other people can vote the tags up or down. These apps are a little bit less hated by Niantic, being that they’re not real-time trackers and can be right or wrong.

Unfortunately, these types of Pokémon-tracking apps also happen to be less reliable because some game players like to be trolls and mark locations of rare Pokémon on the map when they’re not really there to begin with.

Niantic has been very vocal about how they don’t agree with cheating, and they very much consider the concept of seeing real-time spawns of Pokémon online to be cheating. Such services are said to take the fun out of the game because it makes it less of a challenge and adventure.

“Yeah, I don’t really like that. Not a fan,” Niantic’s CEO John Hanke said in an interview when asked how he felt about third-party Pokémon-tracking apps. “We have priorities right now but they might find in the future that those things may not work. People are only hurting themselves because it takes some fun out of the game. People are hacking around trying to take data out of our system and that’s against our terms of service.”

As a result, it’s not surprising that they’d implement fixes into their app and server to prevent third-party services from being able to populate maps of live Pokémon spawns.

By removing these real-time Pokémon-tracking apps from existence, Niantic also reduces a lot of strain on their servers, which means that they can provide a better experience for players as a whole.

Those real-time Pokémon-tracking apps were actually pinging Niantic’s servers in real time to get the live statistics of spawn time, which is why you were limited to 30-second refreshes, and with so many people using these services at once to cheat, it was filling a lot more of the available bandwidth than expected, making the app slower for everyone and even making logging in harder.

How players feel about it

Pokémon GO players have mixed feelings about these changes. There are some who agree that it’s cheating and gives some an unfair advantage over other players that are playing the game fairly, but then there are those who feel that it was nice to be able to see where the rarer Pokémon were and to take a drive over to them.

Nevertheless, one of the bigger changes that players are hating is the less-detailed Pokémon radar, which now lacks the Footsteps function. Players are now finding it harder than ever to find certain Pokémon that appear in their radar view, as it’s now significantly harder to track a single Pokémon from the list.

Now, unless you’re using an unreliable crowd-sourced app like this free one in the App Store, your game play very much comes down to chance, and that’s just how Niantic wants it, despite some player’s disgruntled opinions.

This may be the future of Pokémon Go; a chance-based GPS game where you roam your area for wild Pokémon; not having anymore live Pokémon-trackers, because Niantic really doesn’t want them to exist.

Who knows, maybe someone will find a way around it at some point; it’s too early to tell right now.

If you haven’t already started playing Pokémon GO, you can download the game for free from the App Store.

How do you feel about the removal of Footsteps and the shut-down of live Pokémon trackers? Share in the comments below!