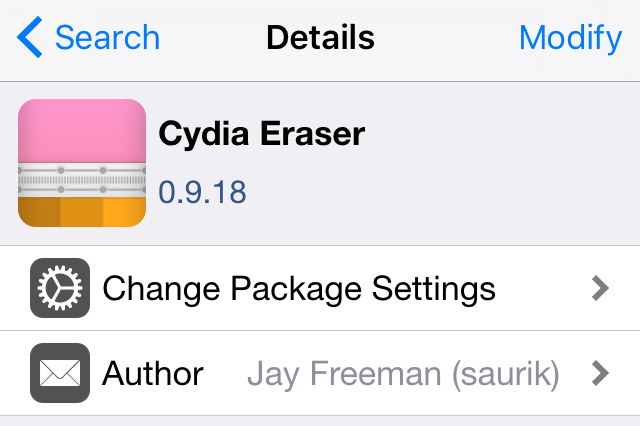 Saurik has released an update for the Cydia Impactor un-jailbreaking tool on Monday. Among the changes, the too has been renamed Cydia Eraser and has received a new icon.

One thing that’s for sure is Cydia Impactor hasn’t gotten much attention since its original release last year. The tool was originally created for iOS 8, and until today, it only worked with firmware up to iOS 8.4.

The tool allowed a user to remove a jailbreak from their device, essentially resetting their device to factory settings on the firmware version it’s already on without the need to restore and update on iTunes. This would make it easier to sell old devices on jailbreakable firmware versions.

Today’s update brings with it not just a new name and a new icon, but partial support for iOS 9.0 as well.

Don’t hold your breath… yet

Saurik is not very detailed in what exactly this means, so it’s hard to tell exactly what Cydia Impactor is useful for in terms of iOS 9. On the other hand, some comments made by the Cydia creator on a Reddit thread do shed a little bit of light.

The Reddit thread was incorrectly entitled with “9.x support,” and Saurik got online to set things straight, saying that this update doesn’t add support for iOS 9.x, but rather partial support for only iOS 9.0.

Additionally, Saurik was also asked “what devices” and “which 9.0 firmwares” were supported by Cydia Eraser, and he noted that only firmwares that had single-step OTAs available for them were supported, which still leaves a lot of guesswork in terms of your average jailbreak user.

It is whatever Apple had a single-step OTA file available for. This tool still supports the exact same versions of the firmware as 0.9.17+53.

As it would appear, the update is minor, and just to clear up any confusion, this update does not add support for the firmwares versions 9.2-9.3.3, which are now jailbreakable thanks to Pangu.

Additionally, Saurik is very stern to note that the support is only for the 9.0 firmware, and it does not work on 9.0.x firmware versions.

So with that being said, don’t try and erase your new jailbreak with Cydia Eraser, because you’ll be highly disappointed with the results.

At this point in time, if you’re having problems with your jailbreak, the best thing to do is just restore your device via iTunes. iOS 9.3.3 is the current firmware from Apple anyways, so you can always go back to your jailbreak if you wanted to.

We hope at some point Cydia Eraser will support modern firmware versions, but it doesn’t look like that’s Saurik’s intention right now due to Apple not providing the resources necessary for the tool to work in full on Apple’s latest iOS firmware versions. So, in short, it’s not really Saurik’s fault.

Would you like to have Cydia Eraser available for your jailbroken device at some point? Share below!