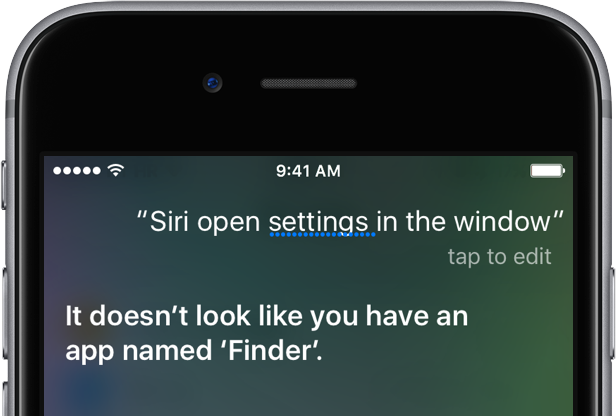 Siri is rumored to be coming to the Mac and third-party apps with an official Siri software development kit (SDK). In addition to teasing a dark mode in iOS 10, Siri seems to be also trolling Apple fans worldwide with an unusual reference to OS X Finder when asked to “open settings in the window.”

There are no windows in iOS, of course, so one would expect Siri to respond with an “I don’t understand” whereas she in fact says that “It doesn’t look like you have an app named ‘Finder’”, as first spotted by Brian Roemmele.

You can try it out yourself.

Simply press and hold the Home button on your iOS device to invoke Siri, and then say, “Siri, show settings in the window”. Your question must begin with “Siri” or the query won’t yield a response saying, “It doesn’t look like you have an app named ‘Finder’” or “I need Finder to do that”.

The response suggests that Siri’s backend had been updated with hooks for Mac apps ahead of today’s keynote. “When I asked a similar question a few weeks ago Siri reported that she couldn’t help me with that,” wrote Roemmele.

RELATED: 10 Siri for Mac features we’d like to see

As mentioned, asking Siri to “Turn on dark mode” on an iOS device produces a response saying, “Sorry, but I’m not able to change that setting,” indicating she soon might be able to, provided the rumors of dark mode coming to iOS 10 are true.

WWDC 2016 is kicking off with a keynote today at 10am Pacific.