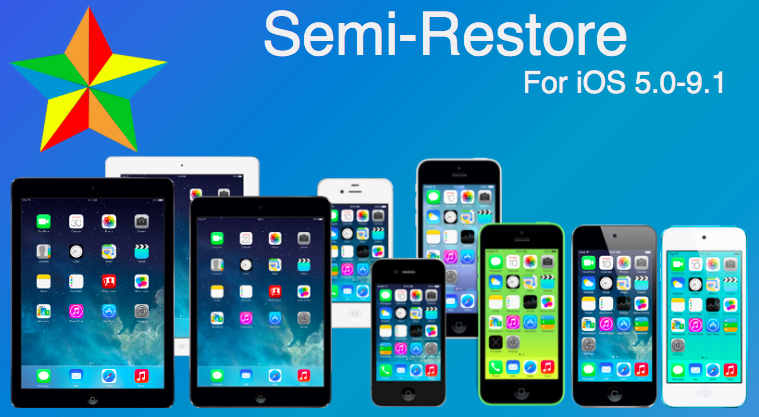 SemiRestore, a tool that allows you to restore your jailbroken devices to a clean state without losing your jailbreak, has been recently updated to support devices running iOS 5.0 all the way up to iOS 9.1. SemiRestore is currently available for Windows and Linux only, with Mac support apparently coming in the future.

If the news may sound exciting at first for jailbreak users who’ve been waiting for such a solution, it must be noted that initial feedback from users who’ve tried the tool is very much mixed, with many reporting getting stuck during the process, and even one person reporting he had no other option of restoring his device to iOS 9.3.2.

What is SemiRestore and why use it?

Last time we talked about SemiRestore was 3 years ago, when the tool was first released with the same purpose as today: restoring a device without losing a jailbreak.

This is particularly appealing to jailbreak users who’ve been experiencing issues on their devices and would like to start off fresh by cleaning it up while keeping the jailbreak.

Similar to another too by Saurik called Cydia Impactor, SemiRestore will wipe everything on the device, seemingly restoring the device to its stock settings. The biggest difference between the two tools is that Cydia Impactor also removes the jailbreak, while SemiRestore stops short of that.

SemiRestore is not a downgrade solution! It only allows you to remove just about everything on your device, including apps, tweaks, photos, media, messages, etc, except for the jailbreak itself, meaning you don’t have to go through the jailbreak process again after running SemiRestore.

The tool will work with any jailbroken device running any version of iOS 5.0 all the way to iOS 9.1, which is the latest jailbreakable iOS version.

SemiRestore is currently available for computers running 64-bit Windows or 64-bit Linux. The SemiRestore website suggests that a Mac version will be made available in the future, but there is just no specific indication of exactly when at this time.

The SemiRestore site notes that Windows users must have iTunes 12 or newer, and .NET 4.0 or higher installed. Linux users must have libimobiledevice, GTK 3, libusbmuxd-tools, and openssl installed. The jailbroken device must also have OpenSSH installed on it for the process to work.

How to use SemiRestore

Because of its current state, we didn’t feel comfortable running SemiRestore to write a tutorial about it (hey, we care about our jailbreak too!), but we certainly will when the tool is updated for stability and performance improvements.

In the meantime, you can check out our SemiRestore tutorial and video from a few years back, which should give you an idea about the process, although things appear to have been simplified a bit since then.

SemiRestore can be downloaded directly from the tool’s website.

Although the promise of SemiRestore is pretty exciting, especially for users who’ve been experiencing issues on their current jailbreak set up, it must be noted that the initial feedback from users who been running the tool is very mixed, with seemingly more people having issues than not. One users reported having to restore his device to the non-jailbreakable iOS 9.3.2 after using SemiRestore.

To be perfectly clear, I am not suggesting you should stay away from SemiRestore, I’m merely reporting what many others have been sharing on Reddit or sent us via email. I do recommend you check out these Reddit threads to have a feel of the situation for yourself:

The upside is that the developer of SemiRestore seems to be very active and willing to help, having already pushed two updates to the tool. Still, we can’t stress enough that you should proceed with caution.

Have you use SemiRestore? If so, how has you experience been? Please share with us in the comments section.