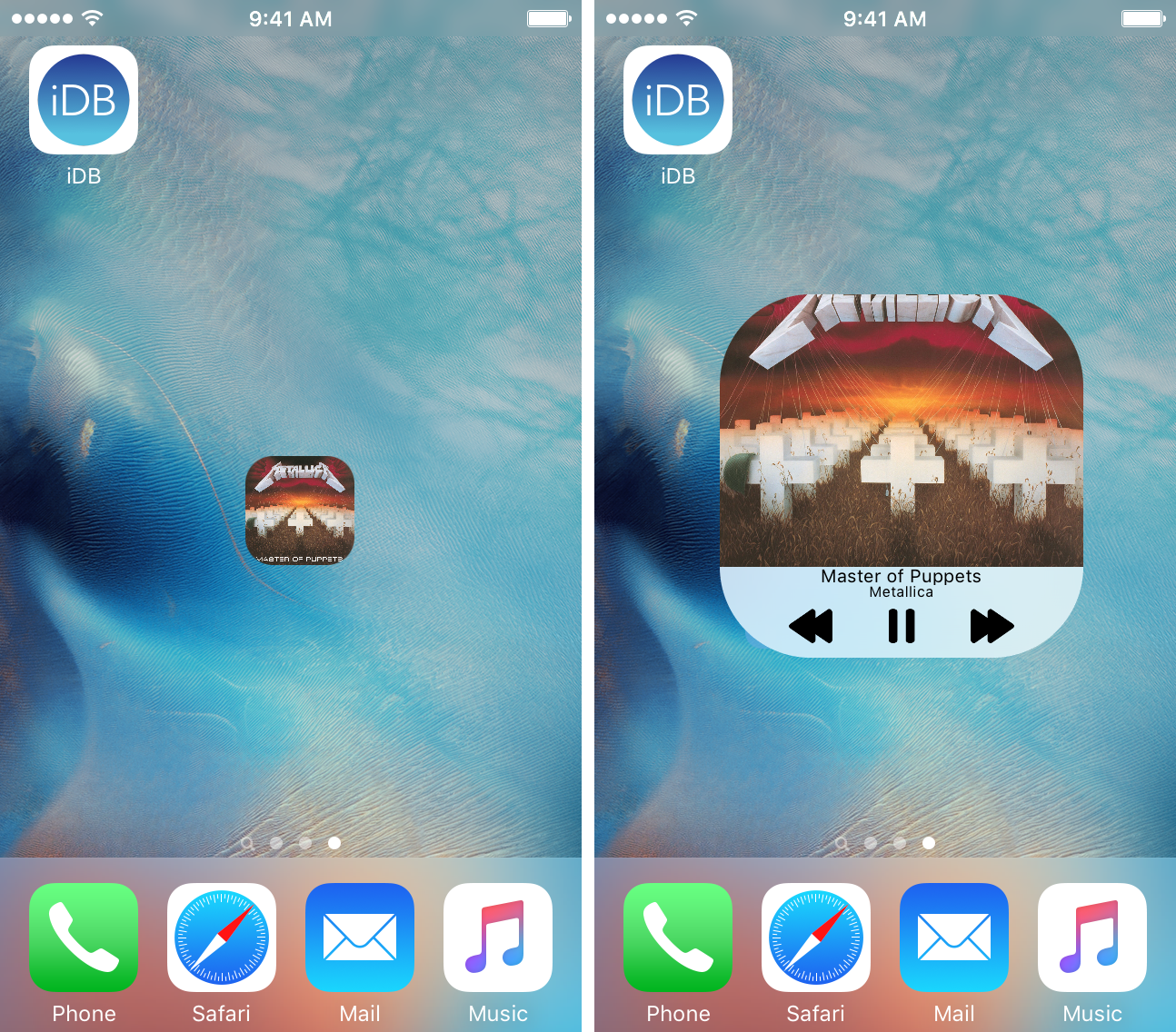 The jailbreak community is one place where we can almost always count on developers to create new ways to interact with music throughout the system-wide iOS experience. New tweaks are released all the time that let you control your music without even being in the Music app itself, and each tries to be better than the last.

A relatively new tweak release, Proton, is available in Cydia and offers some unique functionality of its own. We’ll show you what it’s all about inside this review.

Proton: a mini music player you can access anywhere

Proton is another alternative to opening Control Center to control your music and to find out more information about whatever it is you’re listening to. The tweak’s small icon hovers around any interface you’re in, whether it’s an app, or the Home screen.

We’ve seen plenty of tweaks that act similarly to this, however as each one has its own unique user interface and options to configure, no two tweaks of this nature are ever truly 100% alike.

Proton has two forms: one where the floating icon, about the size of a Home screen app icon, hovers around with nothing more than the album art of whatever it is you’re listening to (this is called Unsnapped mode), the other is a floating widget, about the size of four Home screen app icons, and this form has all of the following things built into it (this is called Snapped mode):

Since the little floating icon can undoubtedly get in the way sometimes when you don’t want it to, you can easily tap and drag to move the icon anywhere on the screen where you might want it to be.

Even when that’s not enough, you’ll find that the tweak’s options will more than deal with this problem in a way suitable for you.

After you install Proton, you can immediately head over to the Settings app and start configuring the tweak via the new preferences pane to your liking. 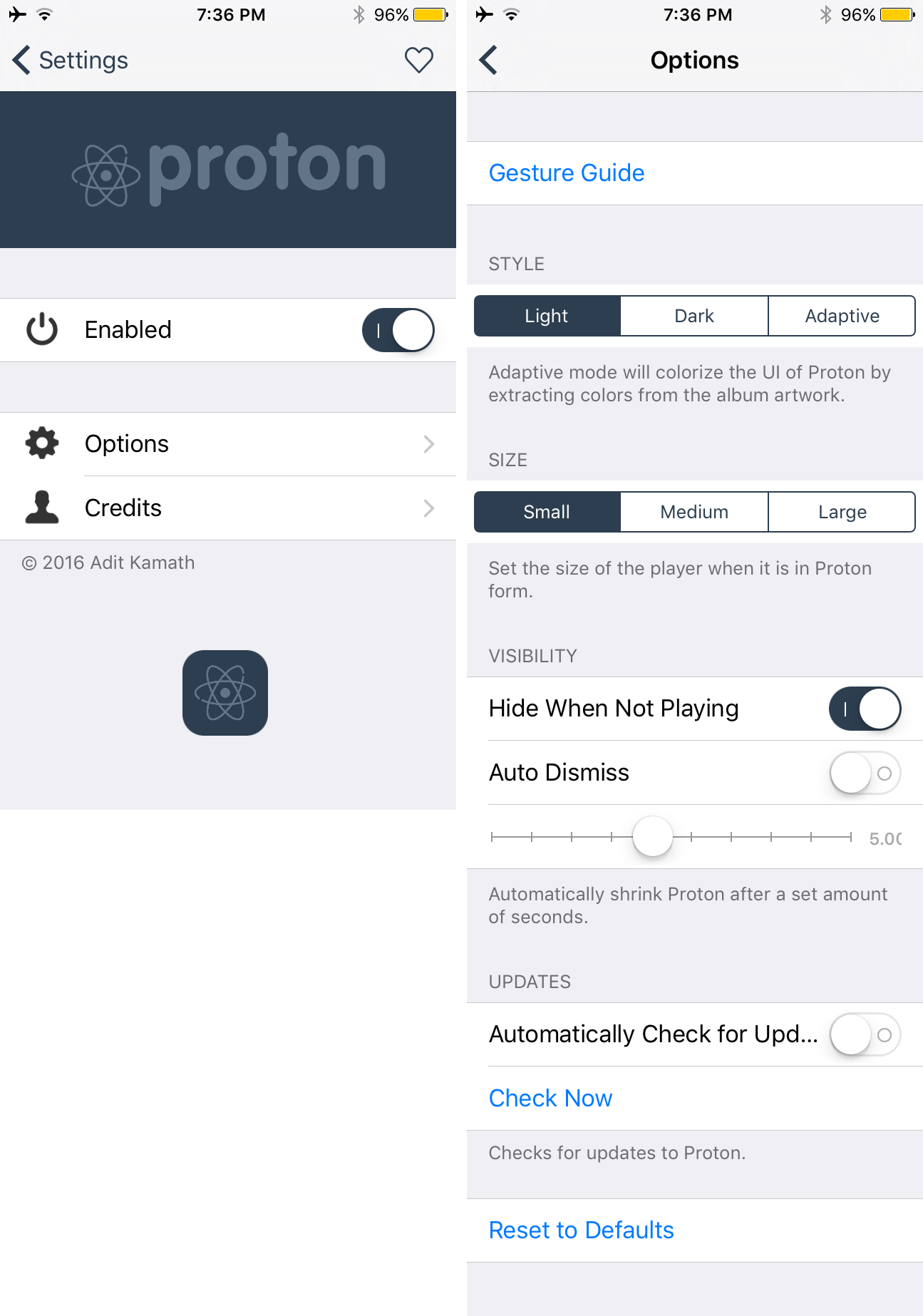 Without a doubt, one of the features I enabled immediately was the “Hide when not playing” option. This is because when I’m not listening to any music, I’d rather not have the interface in my face all the time, getting in the way of everything.

On the other hand, when I am listening to music, I seem not to mind it as much because the controls are at my fingertips immediately, no matter where in iOS I might be.

As far as the rest of the settings go, I recommend the default settings, although changing the style to Adaptive mode does add a touch of slightly sexy color matching, and that’s the only other setting I really changed: 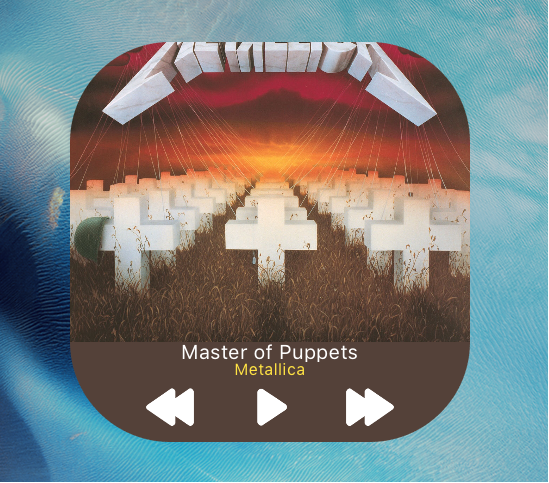 Take note of the brown-colored base, which is different than the default shown at the start of this article. In adaptive mode, the music control buttons change between white or black, depending on the background it has to display over. Even the artist name and song title have the ability to change colors to adjust legibility.

My thoughts on Proton

Because I see so many tweaks always trying to compete to be the best music player for jailbroken devices, I initially thought to myself, “oh great… another one…”

After giving it a shot, however, it has managed to grow on me a little more. I probably wouldn’t use it on my daily driver, because I hate when things hover around on my screen when I’m trying to use my iPhone. Nevertheless, it is an option that’s out there for others who may feel differently than I do.

In terms of the price, which is set at $1.99, the feature set seems a little limited. In my opinion, this should be a $0.99 jailbreak tweak.

If you’re looking for something new to use while listening to your music, whether with Apple Music, Spotify, or another music service, Proton could offer a new kind of experience for you if you’re jailbroken. The tweak can be had from Cydia’s BigBoss repository for $1.99.

What are your thoughts on the idea behind Proton? Share in the comments below!