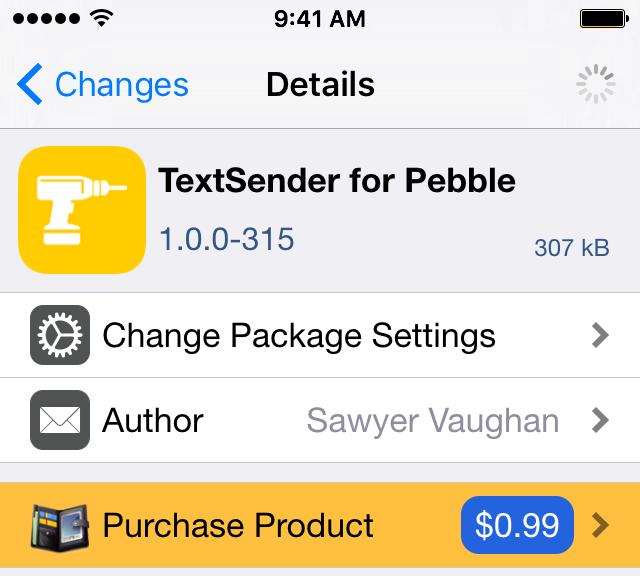 Those who are using a Pebble smartwatch rather than Apple’s own Apple Watch as an accessory for their iPhone are limited in features, but with a new jailbreak tweak dubbed TextSender for Pebble, there is at least some hope for extended functionality.

TextSender for Pebble will, as the name implies, allow those with a Pebble smartwatch to send text messages from their watch via their iPhone.

Because not everyone is using a Pebble, it’s understandable that this tweak isn’t going to appeal to everybody. On the other hand, those who are using the Pebble rather than Apple Watch have been lacking the ability to send text messages from the smartwatch itself; this is a feature that has long been limited to the Apple Watch only.

Pebble users will be able to not only use the TextSender for Pebble app to send messages, but they can also use the native Send Text app on the smartwatch as well.

Those with the Pebble Time also have the option of enabling native text message replying from the smartwatch itself. Texts that are sent and received will appear in the Messages app as expected.

There are some requirements users will need to meet to use this tweak and app combination to send iPhone-based text messages with their Pebble smartwatches.

For one, your Pebble needs to be running the newer 3.x firmware and can’t be running anything earlier than that. Additionally, the app on your iPhone must be the latest Pebble app, and not the older one labeled ‘Pebble OLD VERSION,’ because the old version of the app simply won’t work.

Because I don’t have a Pebble to speak of, I have little way to demonstrate the tweak for you, but based off of the developer’s words, the tweak will work on iOS 9.0 and later and works with Pebble firmware up to 3.12.

There are no options to configure after installing the tweak, so everything should be pretty straightforward once you install everything (the iPhone app, the jailbreak tweak, and the Pebble app) on the proper devices.

It’s also worth noting that this only works for single-recipient messaging. If you’re trying to start a group conversation from your Pebble, you can forget it. That won’t work. It’s unfortunate, but it’s a limitation of the jailbreak tweak at this point in time and it’s not yet known if the developer will try to implement multiple recipient support in the near future.

My thoughts on TextSender for Pebble

Obviously, I haven’t had much of an ability to try the tweak because I don’t use a Pebble, but the idea behind the tweak sounds like one that could be useful for many people who are using a Pebble smartwatch.

If I had a Pebble, rather than the Apple Watch, this is a tweak I would probably want to use because sending messages from my smartwatch is a feature I use regularly when my hands are tied.

For the price of $0.99, TextSender for Pebble isn’t an incredible expensive option, and all the other apps you need to download are completely free. So if you’re looking for a way to text from your Pebble to your iPhone, this is a great way to go.

Overall, it sounds like a great idea, but only those with Pebbles to try it out on will have the ability to chime in.

What are your thoughts on being able to send iPhone-based text messages via your Pebble smartwatch? Share in the comments!