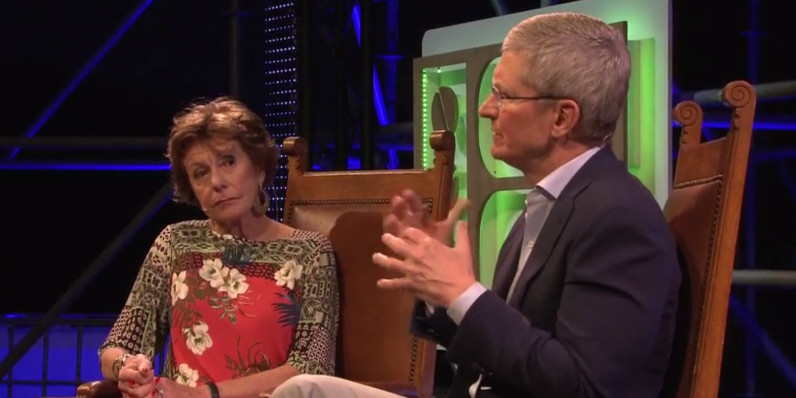 Asked if Apple would consider launching its own telecommunications service to cut off carriers, Cook responded by ruling out an Apple MVNO (Mobile Virtual Network Operator).

Cook said his company lacks the expertise to do so and reiterated that Apple is in fact quite content with the things carriers do.

Here’s the full quote (emphasis mine):

Our expertise doesn’t extend to the network.

We’ve worked with AT&T in the US, O2 in the UK, as well as T-Mobile and Orange, and we expanded as we learned more. But generally, the things Apple likes to do, are things we can do globally.

We don’t have the network skill. We’ll do some things with e-SIMs along the way, but in general, I like the things carriers do.

That Apple lacks the expertise to launch a MVNO service isn’t a good enough argument because Apple also lacked the expertise in smartphones and yet it entered that space with the iPhone. Similarly, Apple has no experience whatsoever in the automobile business and yet it’s rumored to be building a car.

The “We’ll do some things with e-SIMs along the way” sounds like the embedded SIM standard, which Apple backed, is probably coming soon to Apple’s cellular iOS devices, perhaps as early as this fall with the introduction of the iPhone 7.

At any rate, it seems logical to me that Apple has no desire whatsoever to disrupt its mutually beneficial partnership with carriers by launching a MVNO service of its own, especially given that the vast majority of iPhone sales come through carriers.

A rumor swirled last August—and it wasn’t the first one of its kind—that Apple would launch its own virtual network service in the United States and Europe by 2020.

The company vehemently debunked the rumor.