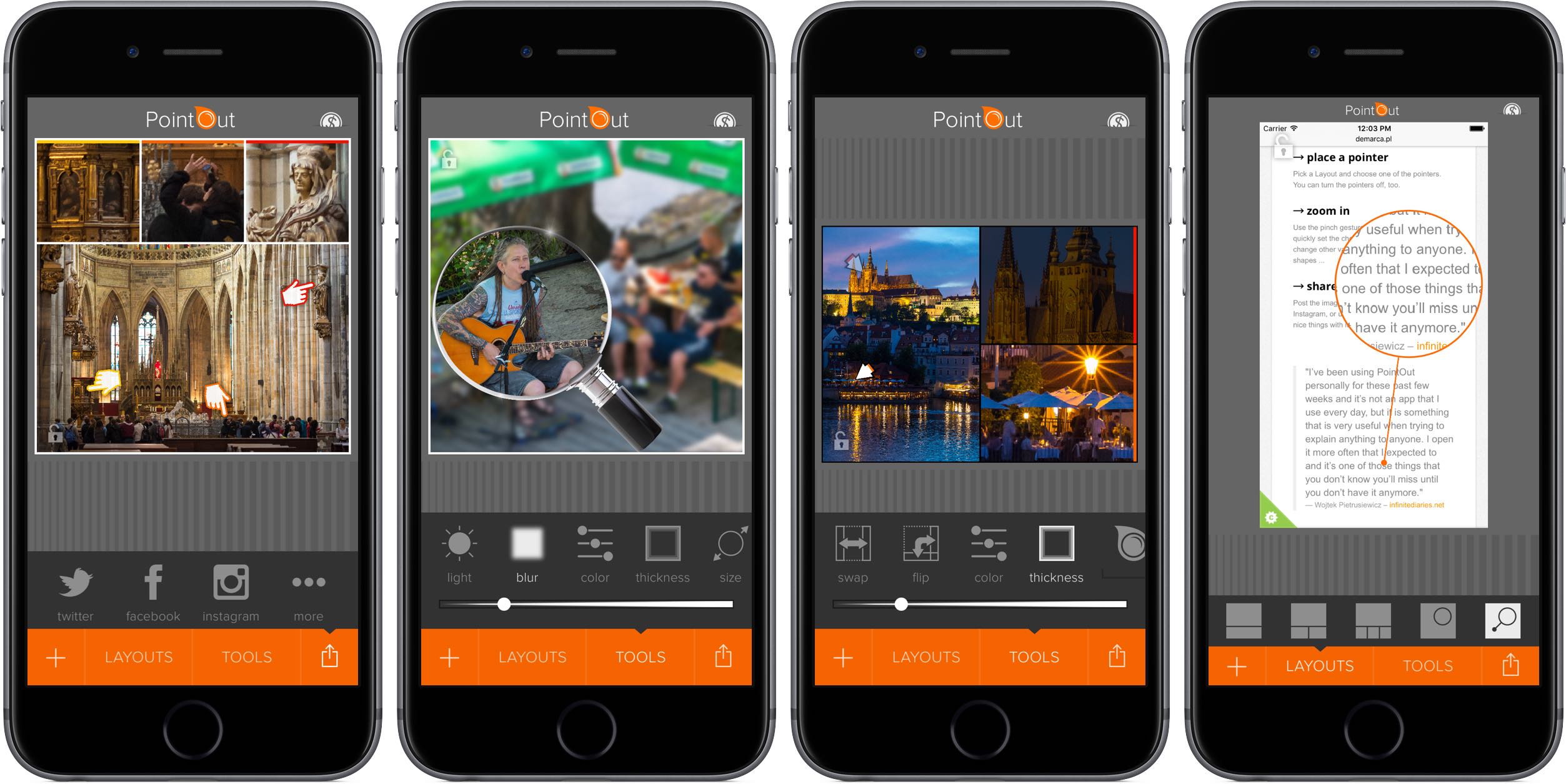 PointOut for iPhone, an exciting image annotation app, is celebrating its first birthday with a feature-packed update that surfaced yesterday on the App Store.

As its name hints, this app lets you point out things on your photos and iOS screenshots with pointers such as arrows, dots, circles, lifelike loupes, precision glasses, different canvas layouts, focus areas and more.

These tolls make it super easy to highlight or enlarge specific details on your photos in a manner that’ll make an impact on your audience.

In its latest update, PointOut has gained some new pointers with draggable text labels for making even greater impact, a flat magnifying glass for those who couldn’t stand the skeuomorphic ones, full support for non-standard iOS keyboards and more.

Having been using this app for months, I’ve grown to like it quite a lot. This quick review should give you an idea why I deem PointOut a unique iOS annotation app.

PointOut’s first anniversary has brought about a business model change.

Developer Marek Moi has ditched the free model for a shareware-with-a-watermark one: the app and built-in content remain free, but your screenshots now have the PointOut logo watermark on them unless you unlock an upgrade to remove it (or replace it with your own logo, if you like).

Additionally, as a result of this change all built-in layouts are now unlocked so that everyone can try them out before deciding about removing the watermark.

Show what you mean

To get started with PointOut, import some screenshots.

In addition to picking any photo from your library, you can also paste an image from iOS’s clipboard, quickly load the last taken photo/screenshot or snap a picture within the app. iPhone 6s and iPhone 6s Plus owners can import images even faster with 3D Touch’s Quick Actions in the shortcuts menu on the Home screen. 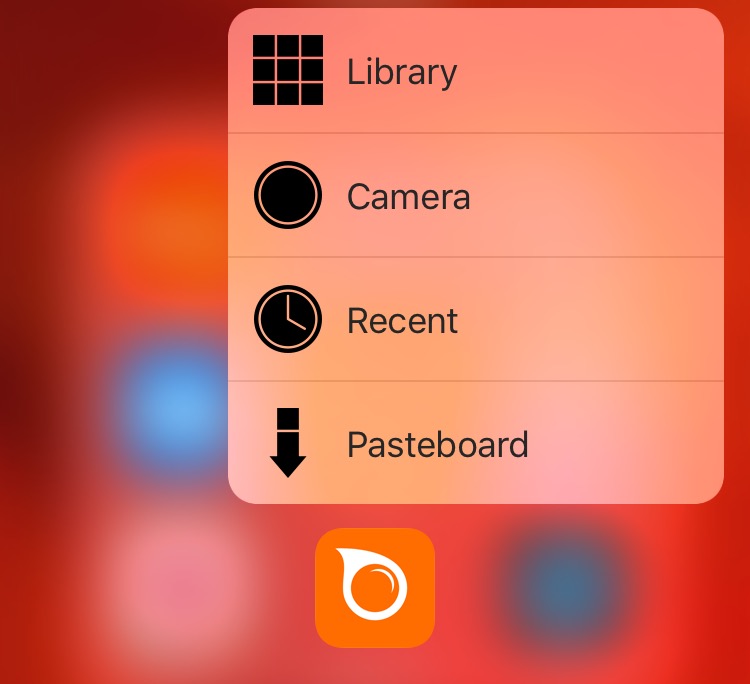 In addition to the various crops, the built-in layouts let you combine multiple images on a grid-like canvas, akin to Instagram’s Layout. These presets let you have up to four screenshots on a single canvas, and you can position each one within its rectangle as you like. To quickly set the image scale, use the pinch gesture or touch the scale bar.

Once you’re satisfied with the layout, the rich set of annotation and visualization tools let you point out up to three areas with arrows, loupes, rectangles, highlights and more. Each of these pointers can be made brighter, darker, larger, smaller and customized further with options such as colors, shadows, borders, filters, line thickness, various backgrounds and more. 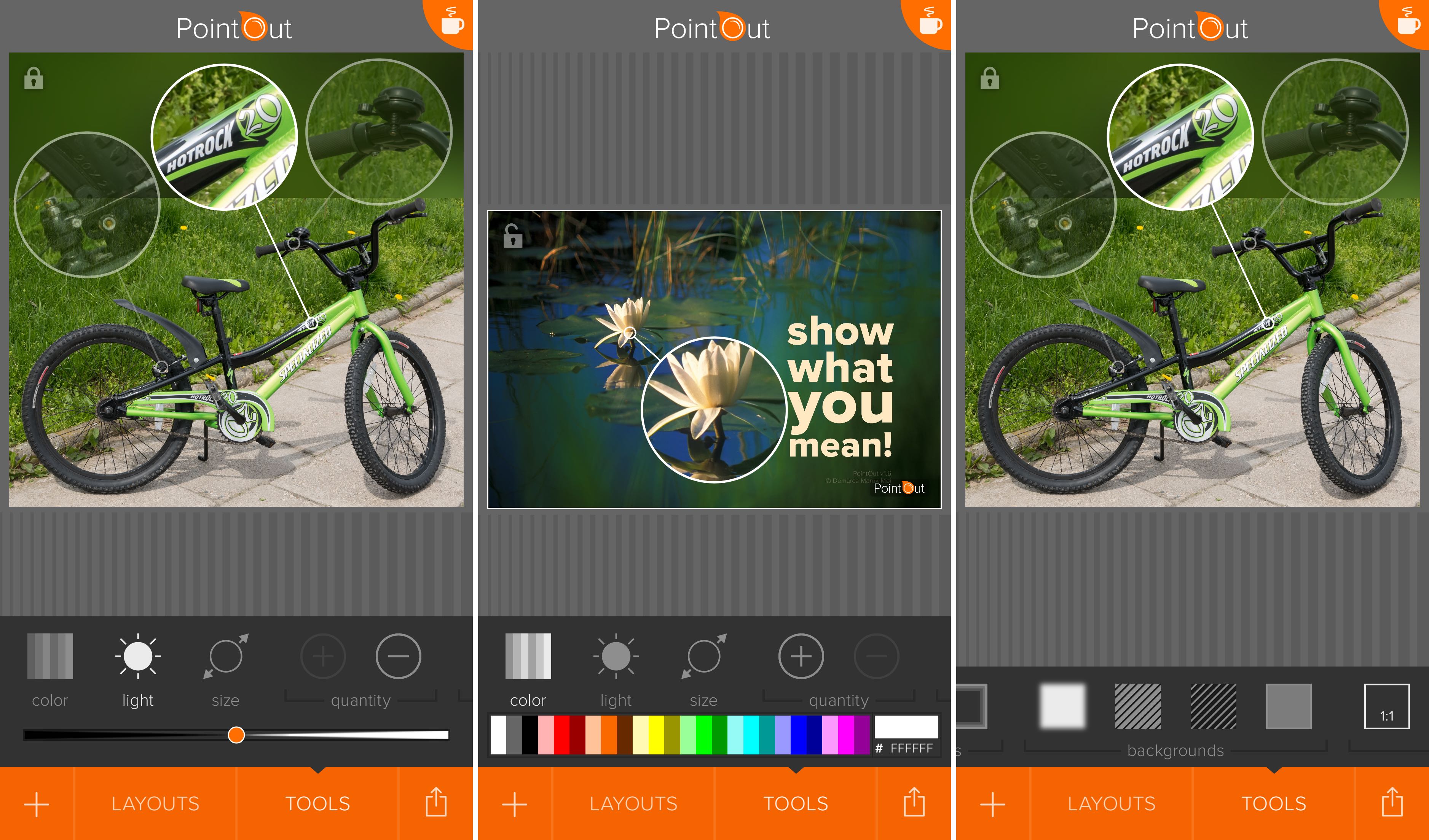 In addition to the skeuomorphic loupe, which may not be everyone’s cup of tea, PointOut’s version 1.6 update has brought out a diagram-style, non-skeuomorphic magnifying glass, as show below.

Sadly, I won’t be using PointOut to annotate my iOS screenshots on iDownloadBlog because it doesn’t fit our website style. That said, I’ve used PointOut for a few personal projects and boy has it made impact—folks who’ve seen my PointOut-enhanced images are convinced I painstakingly edited them in Photoshop. 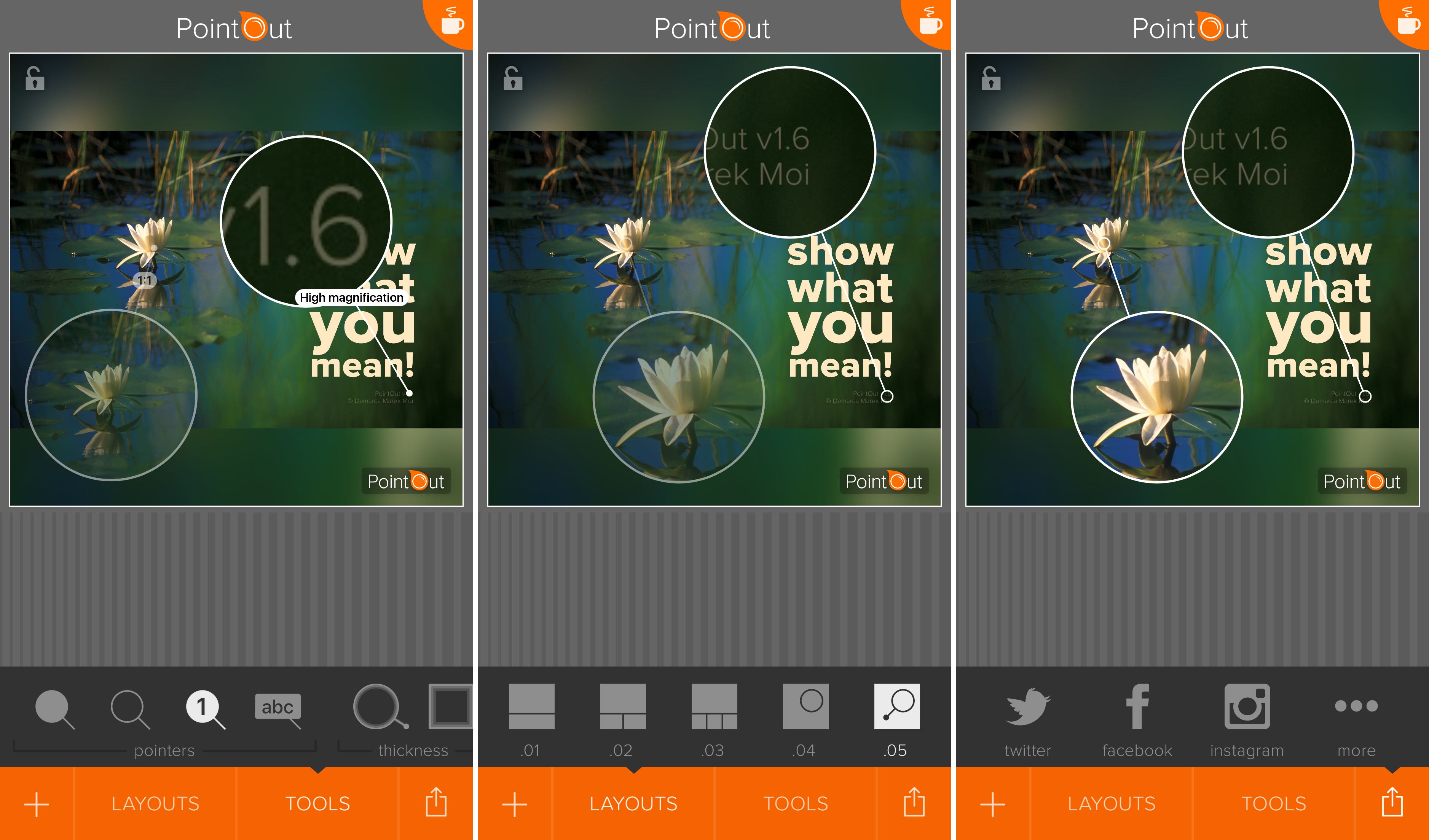 PointOut is especially useful for illustrating tutorials, guides and how-tos because it’s so simple to direct your audience’s attention on an enlarged detail within the image or combine multiple images in a few taps, each one zoomed in on a specific detail. 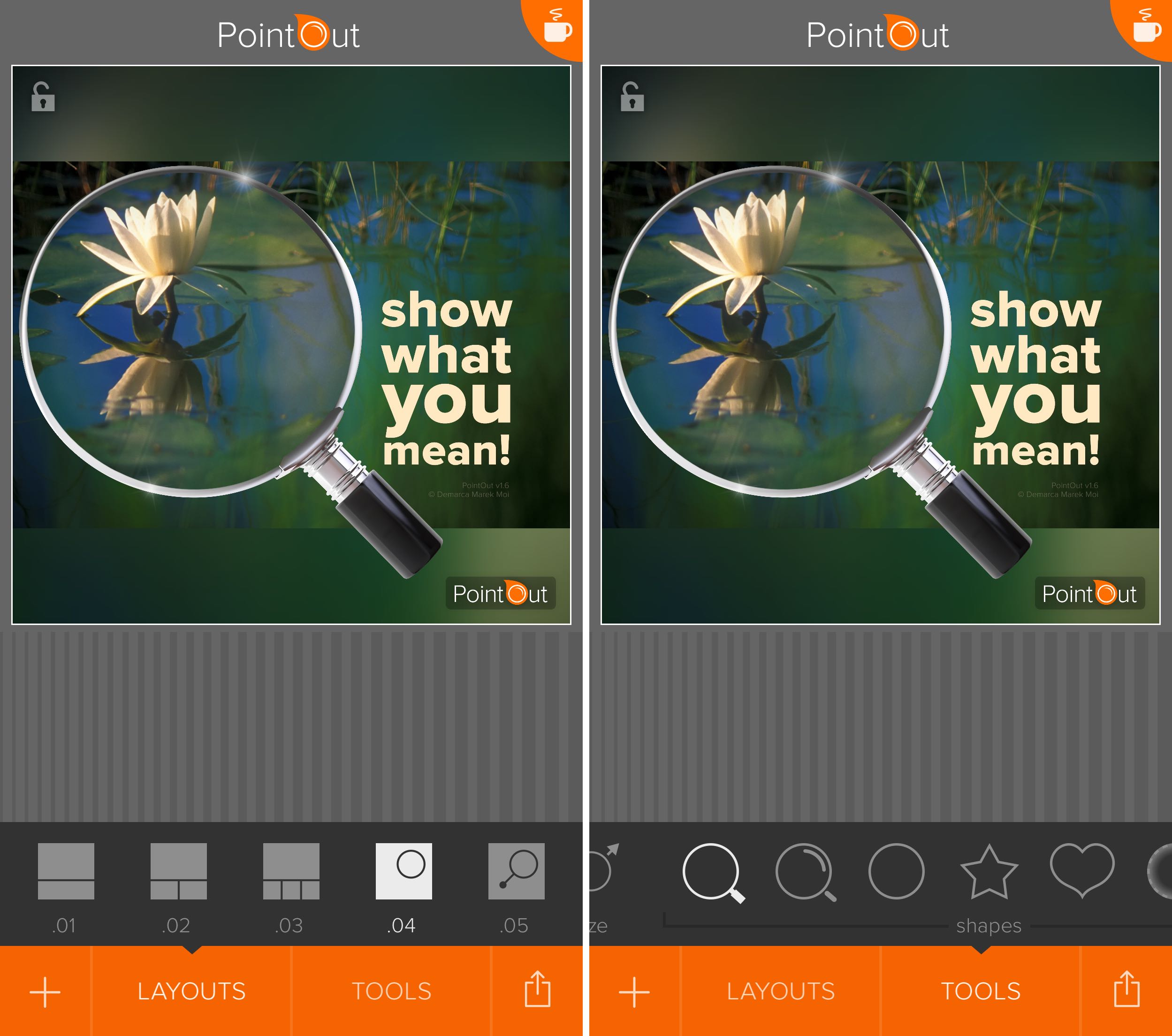 PointOut supports any form-factor iOS device and has a native interface optimized for the iPad Pro’s 12.9-inch screen. Here’s what the app looks on a regular-sized iPad. 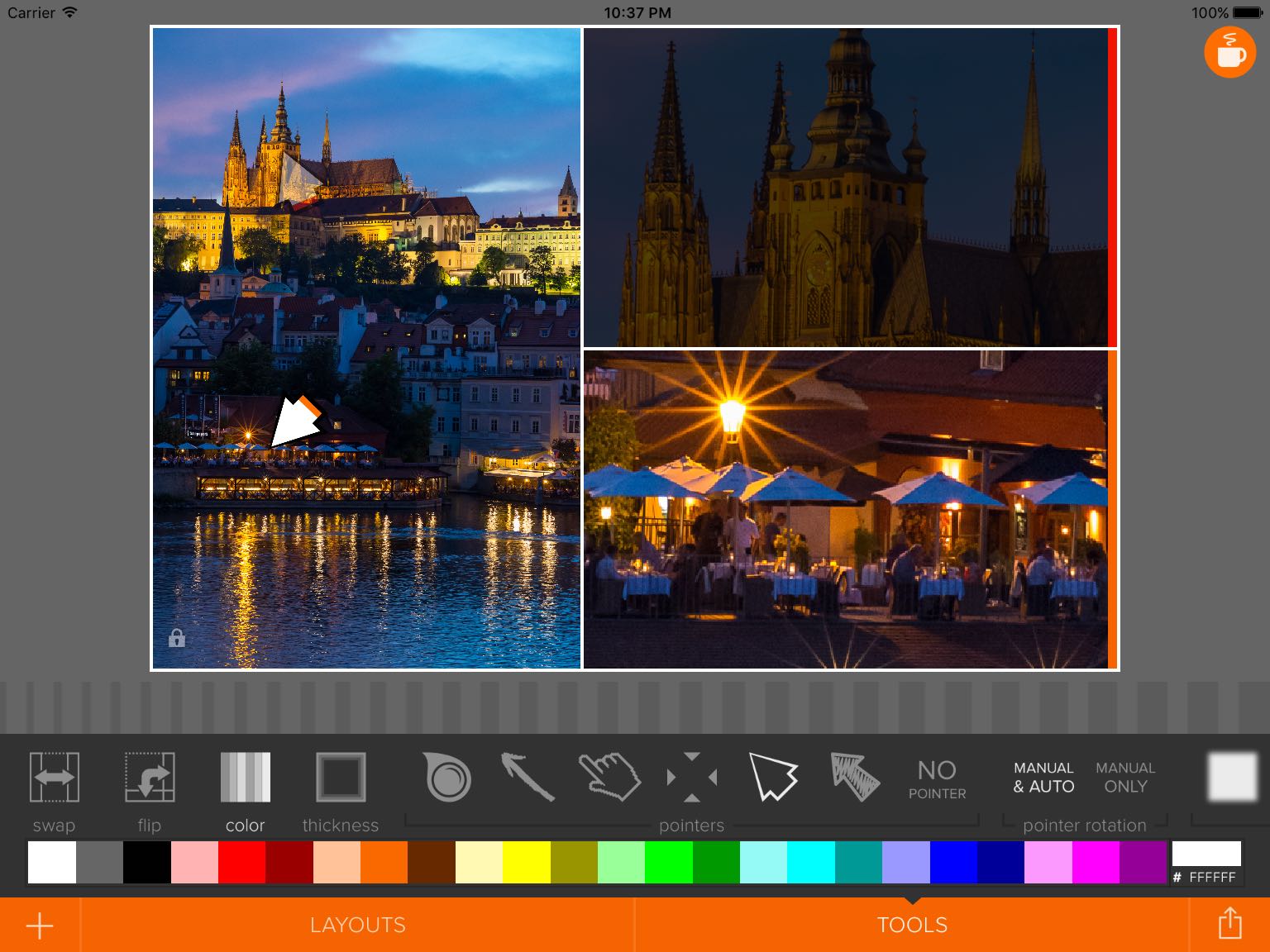 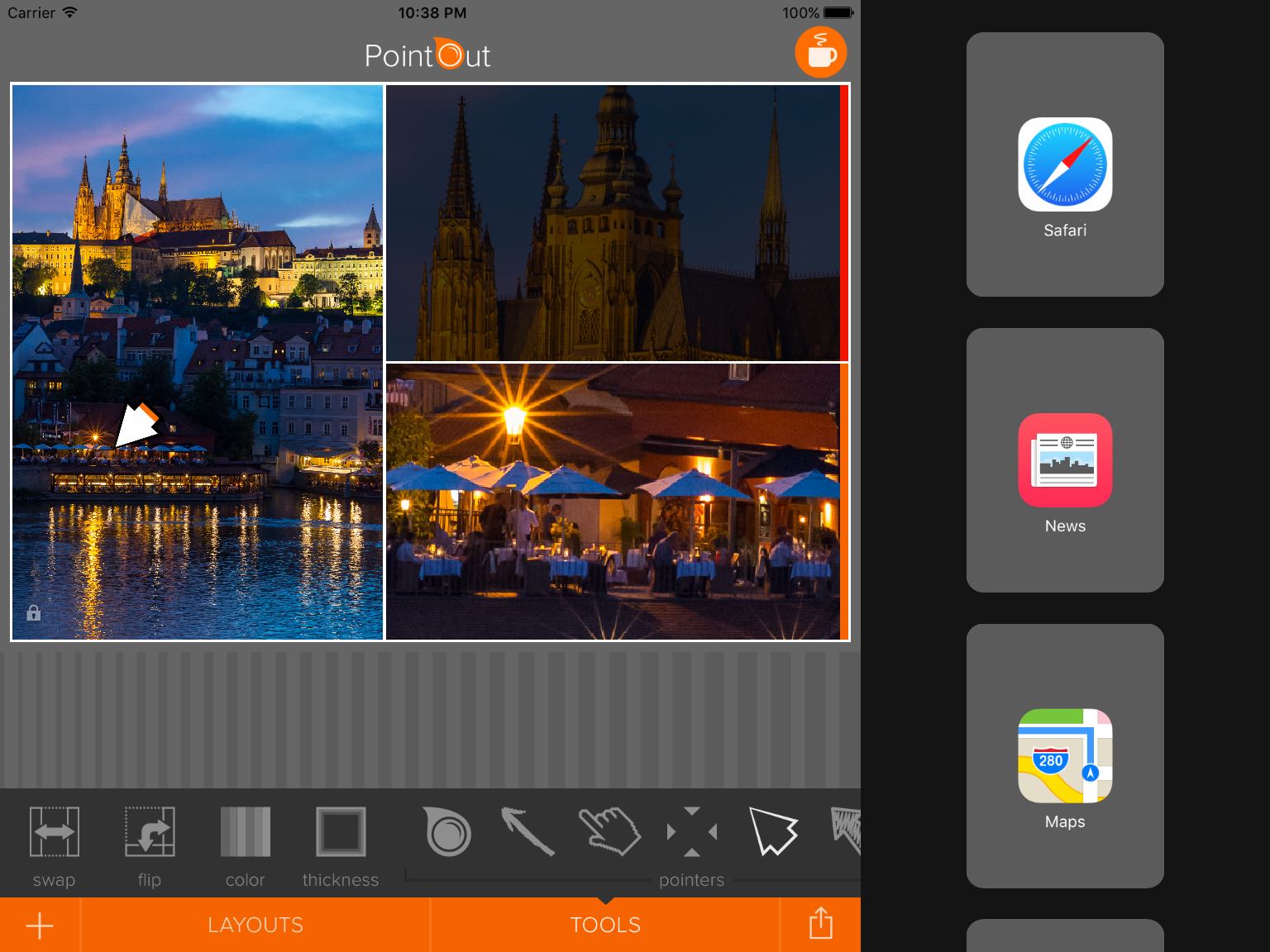 PointOut in Slide Over multitasking mode. 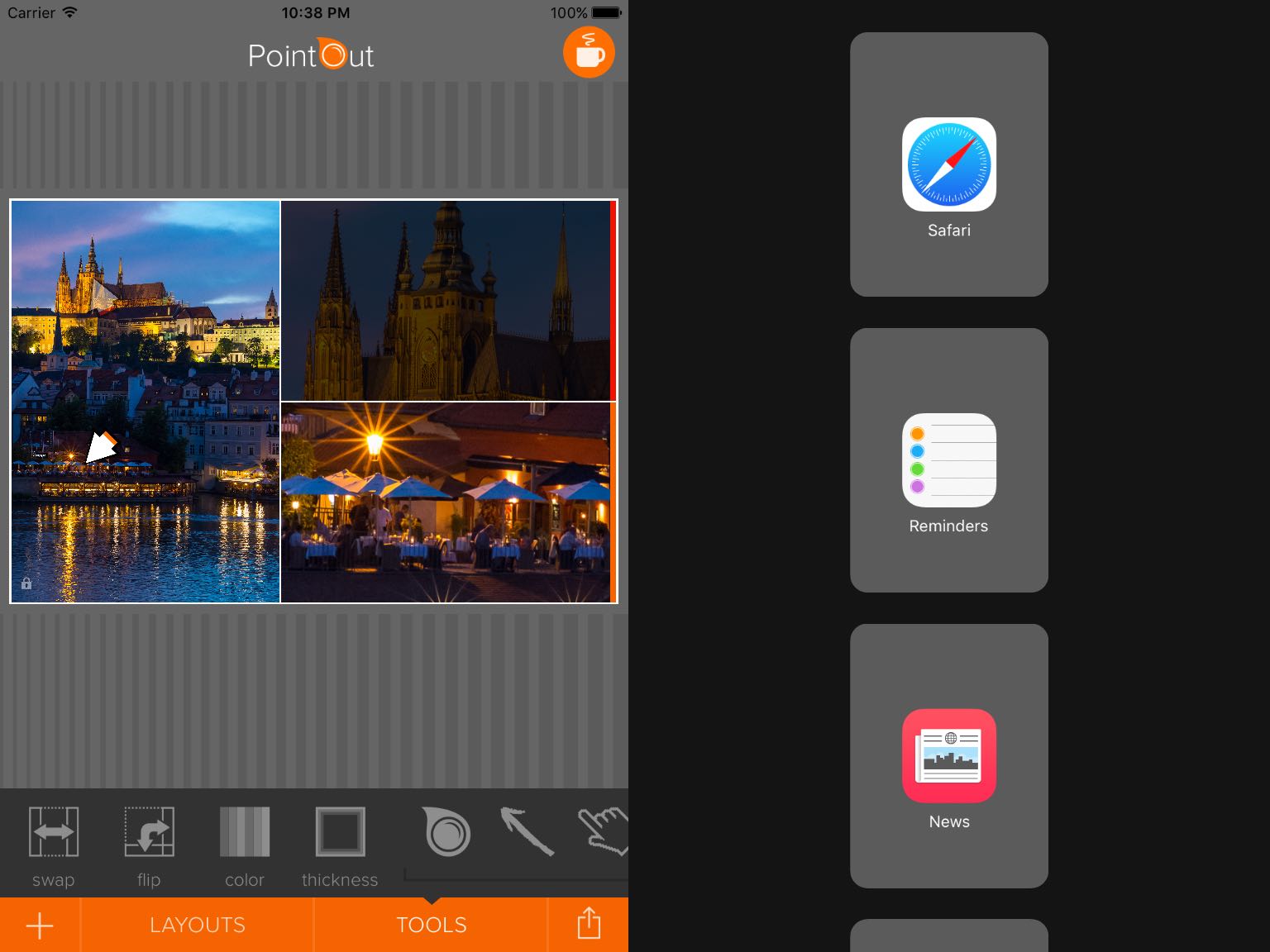 You can run PointOut side-by-side with another app in Split View multitasking mode. 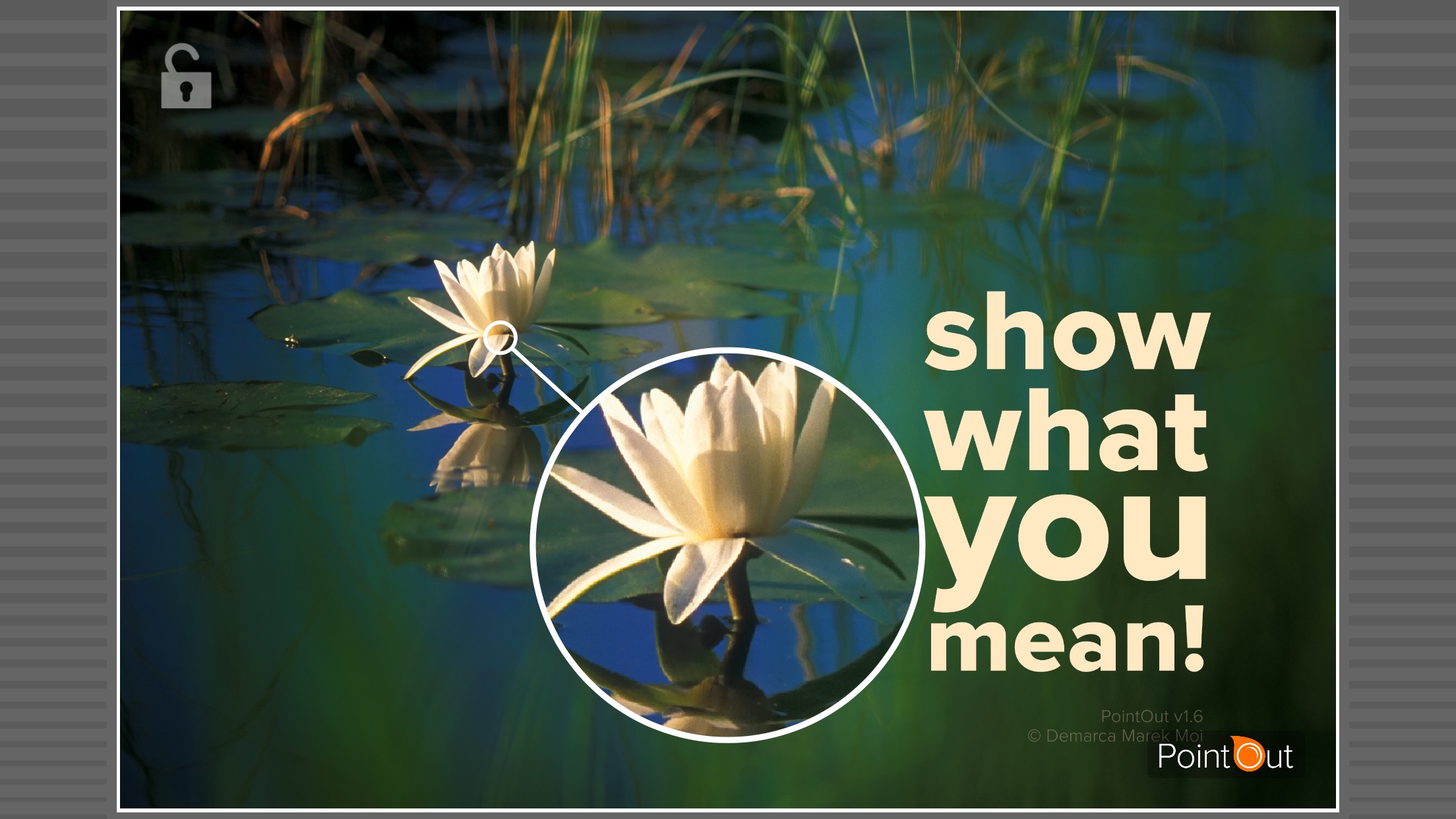 PointOut supports both landscape and portrait orientation on any iOS device.

By the way, if you’re into iOS automation you can use these custom URL schemes for PointOut to enhance your workflow. Here are some cool examples of how PointOut can help get your point across. 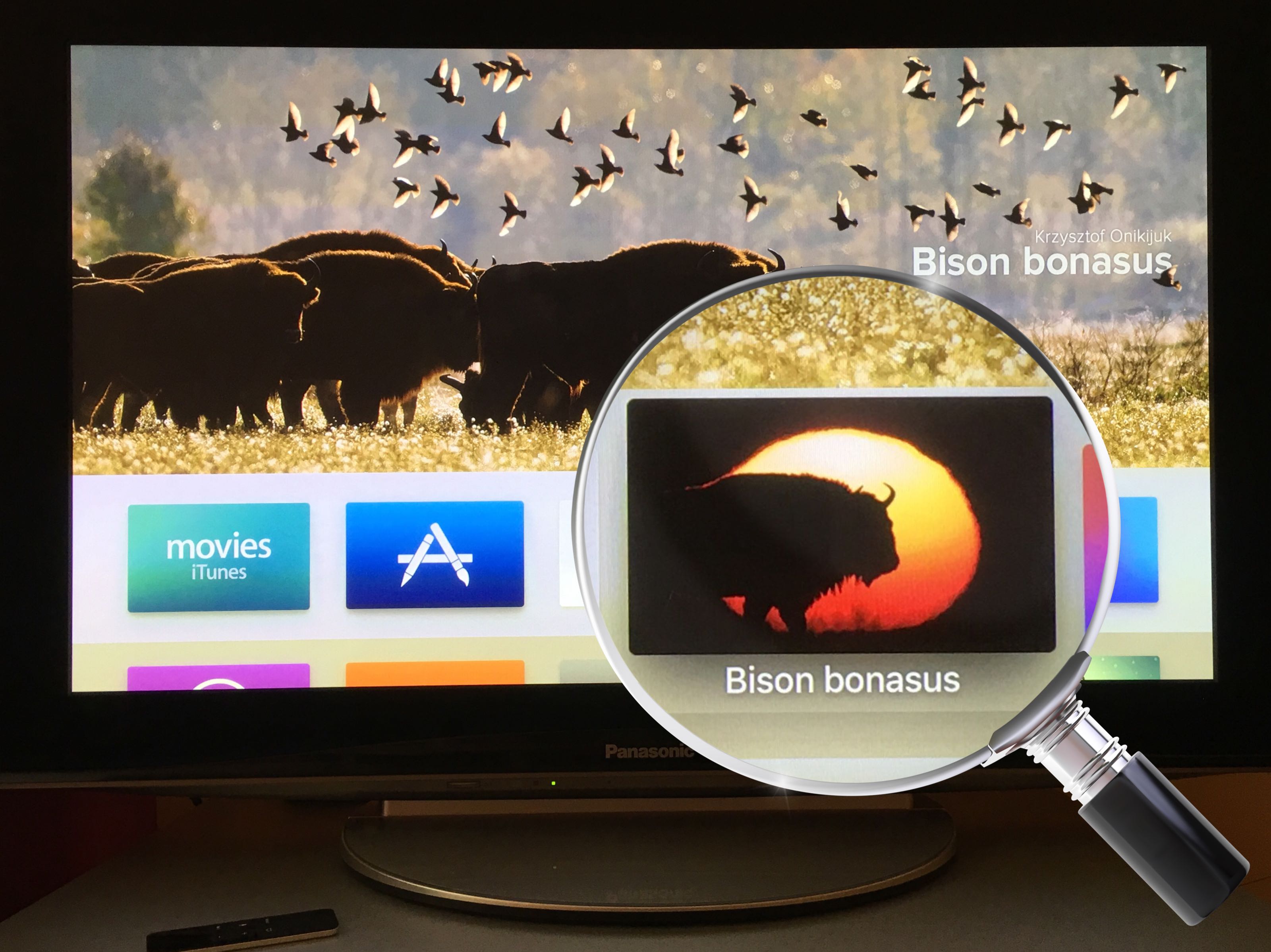 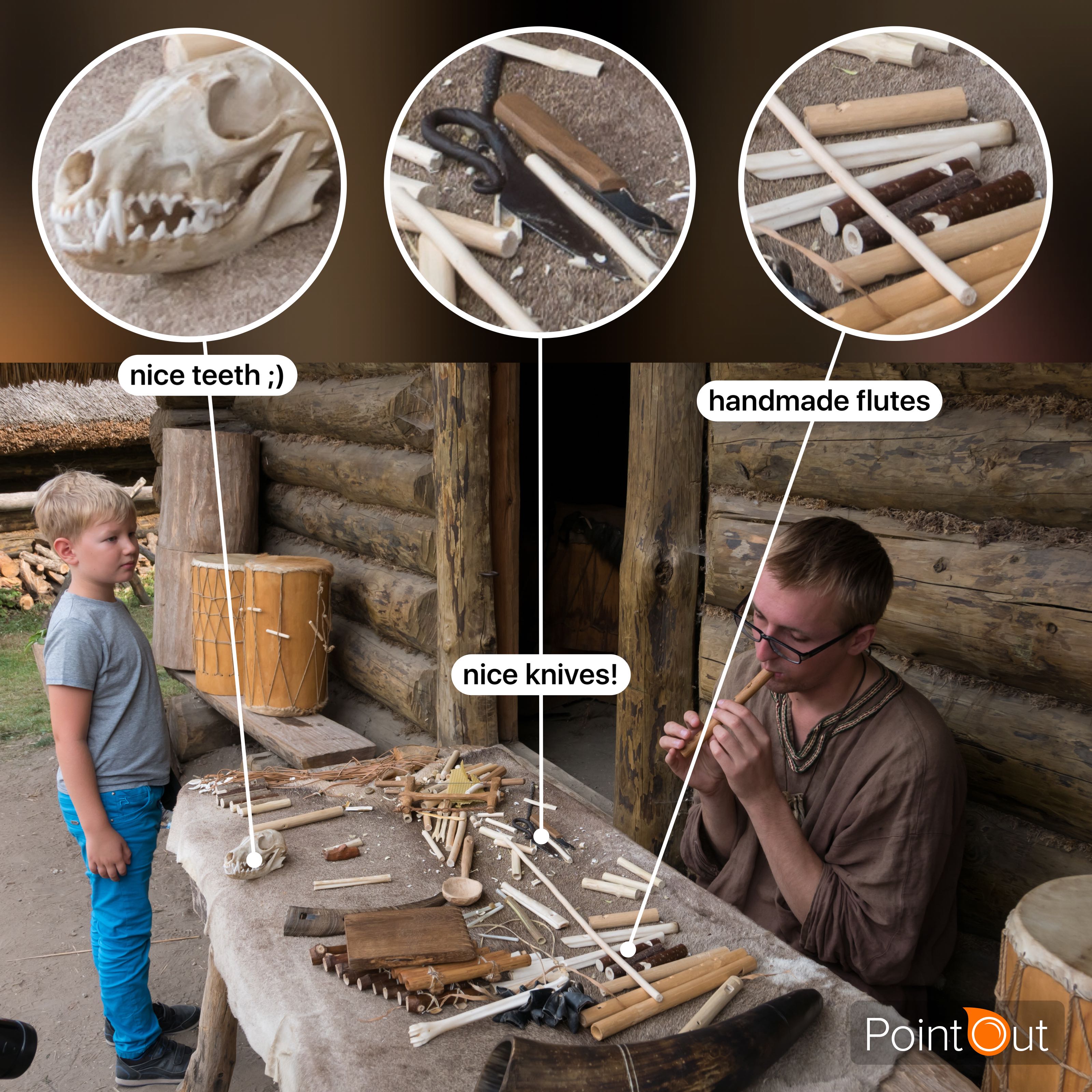 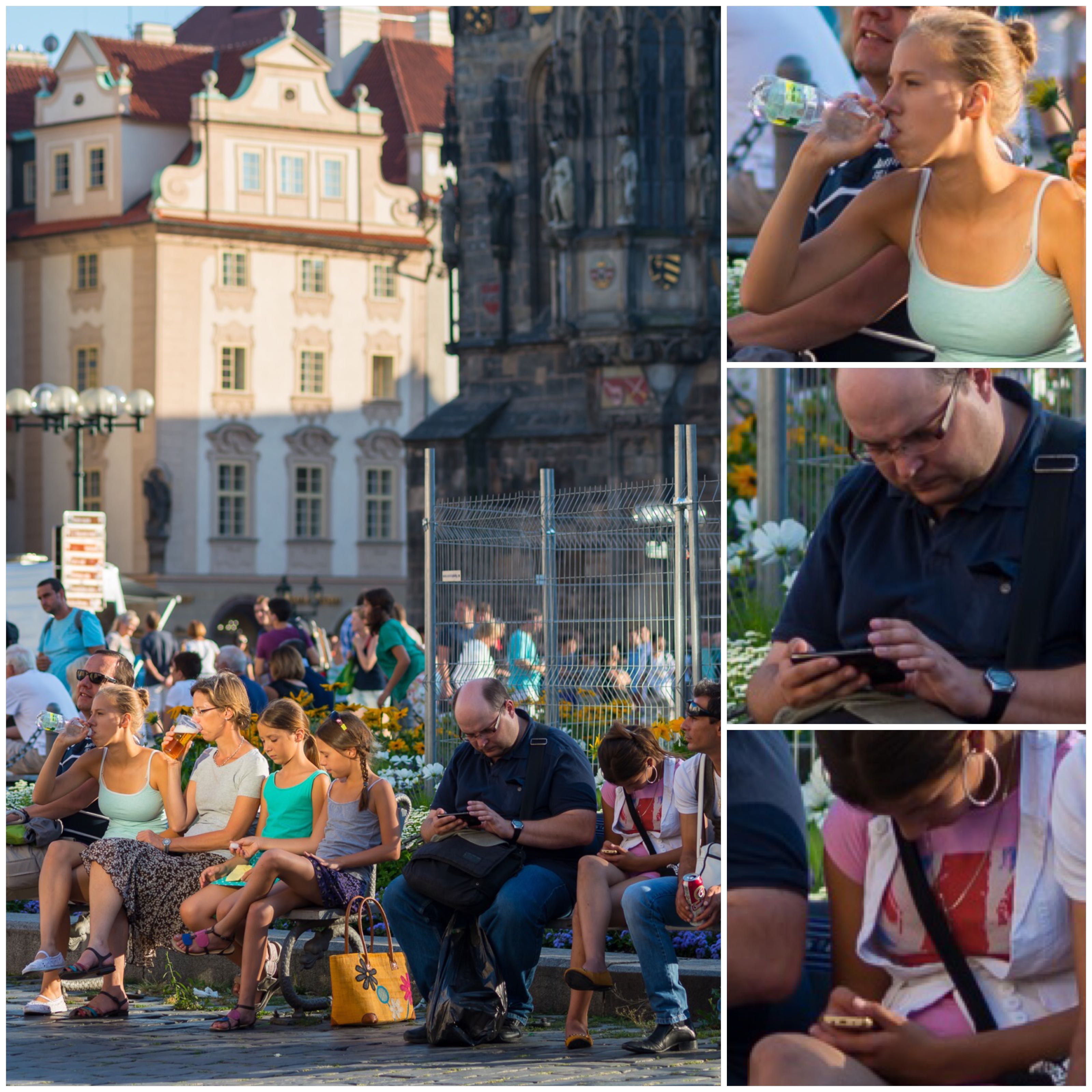 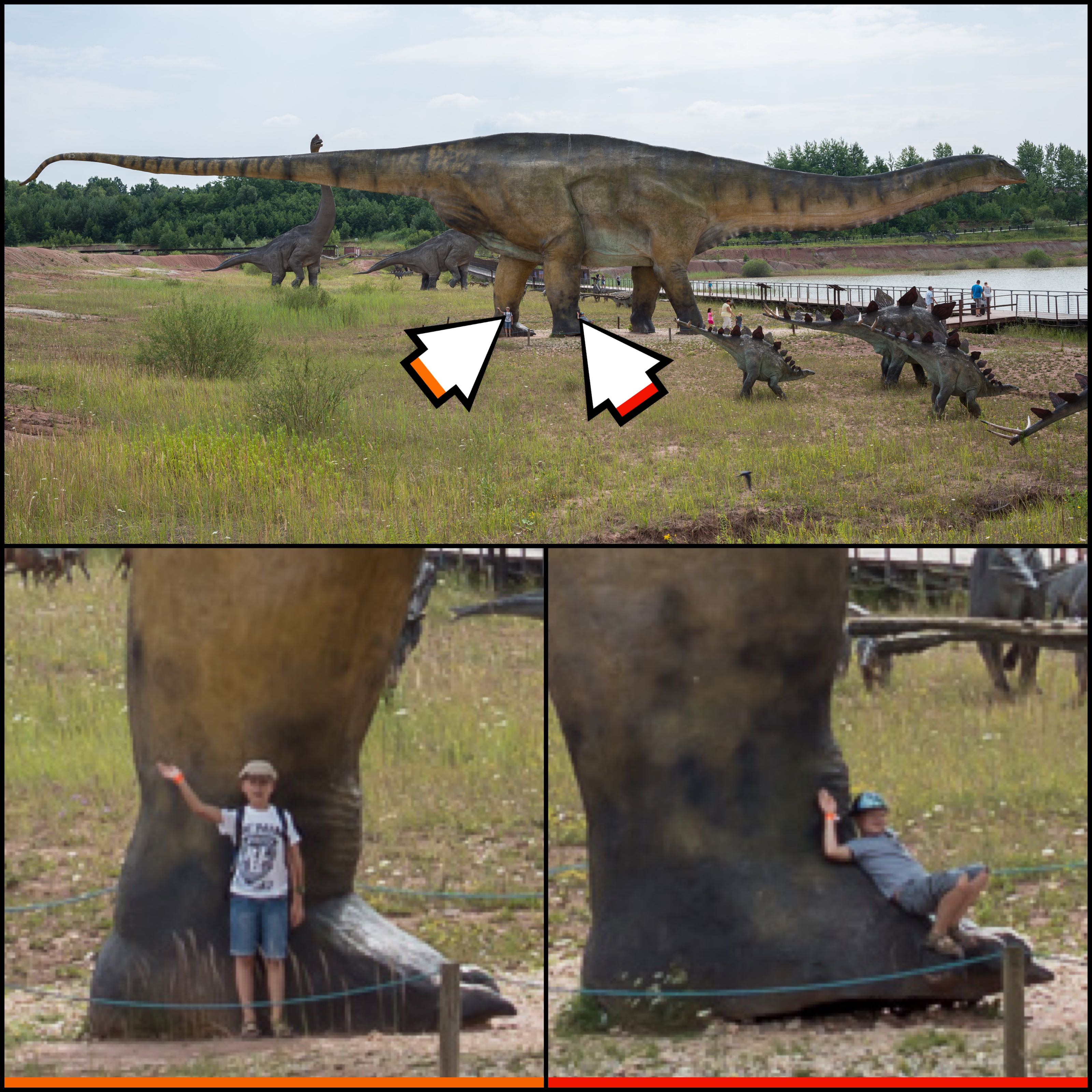 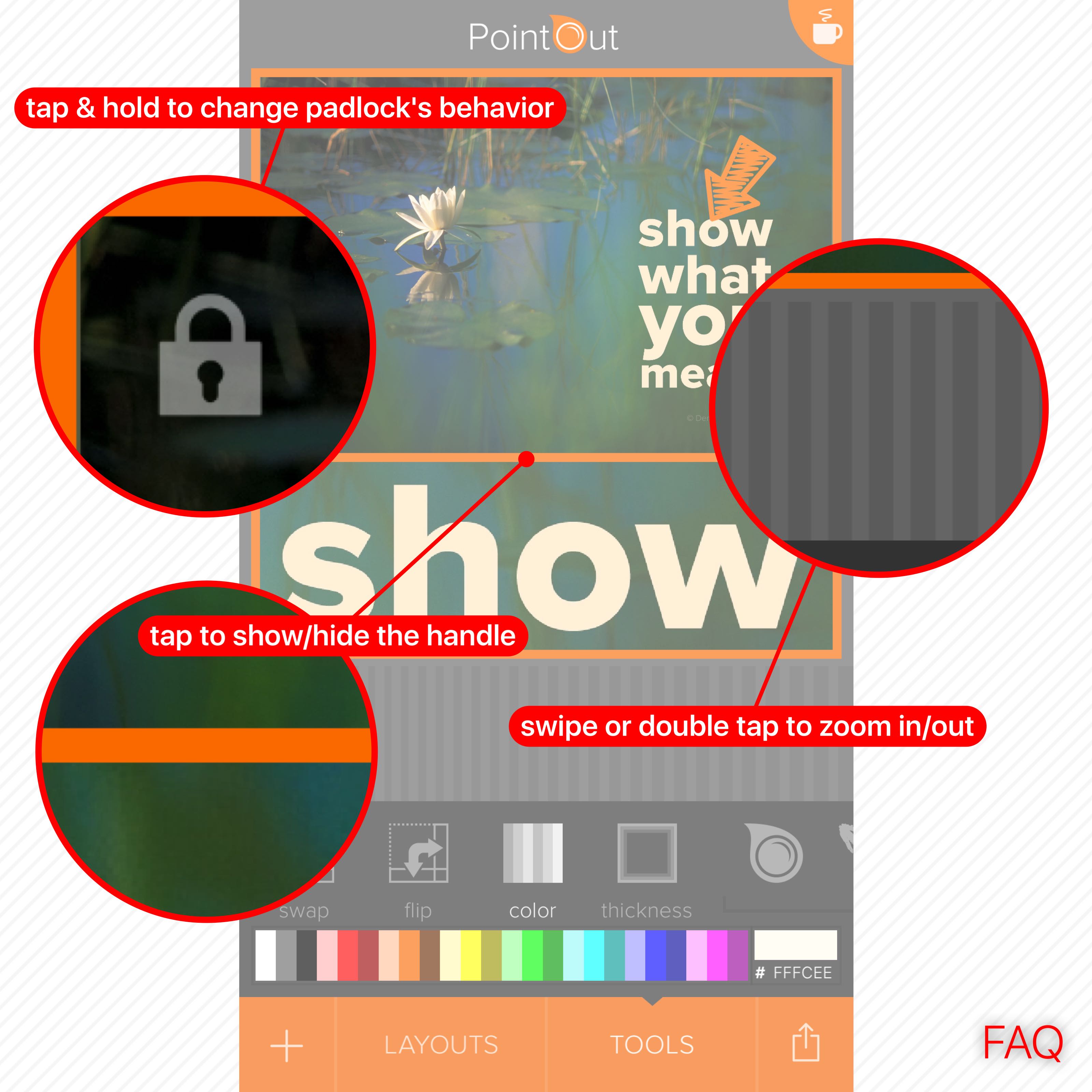 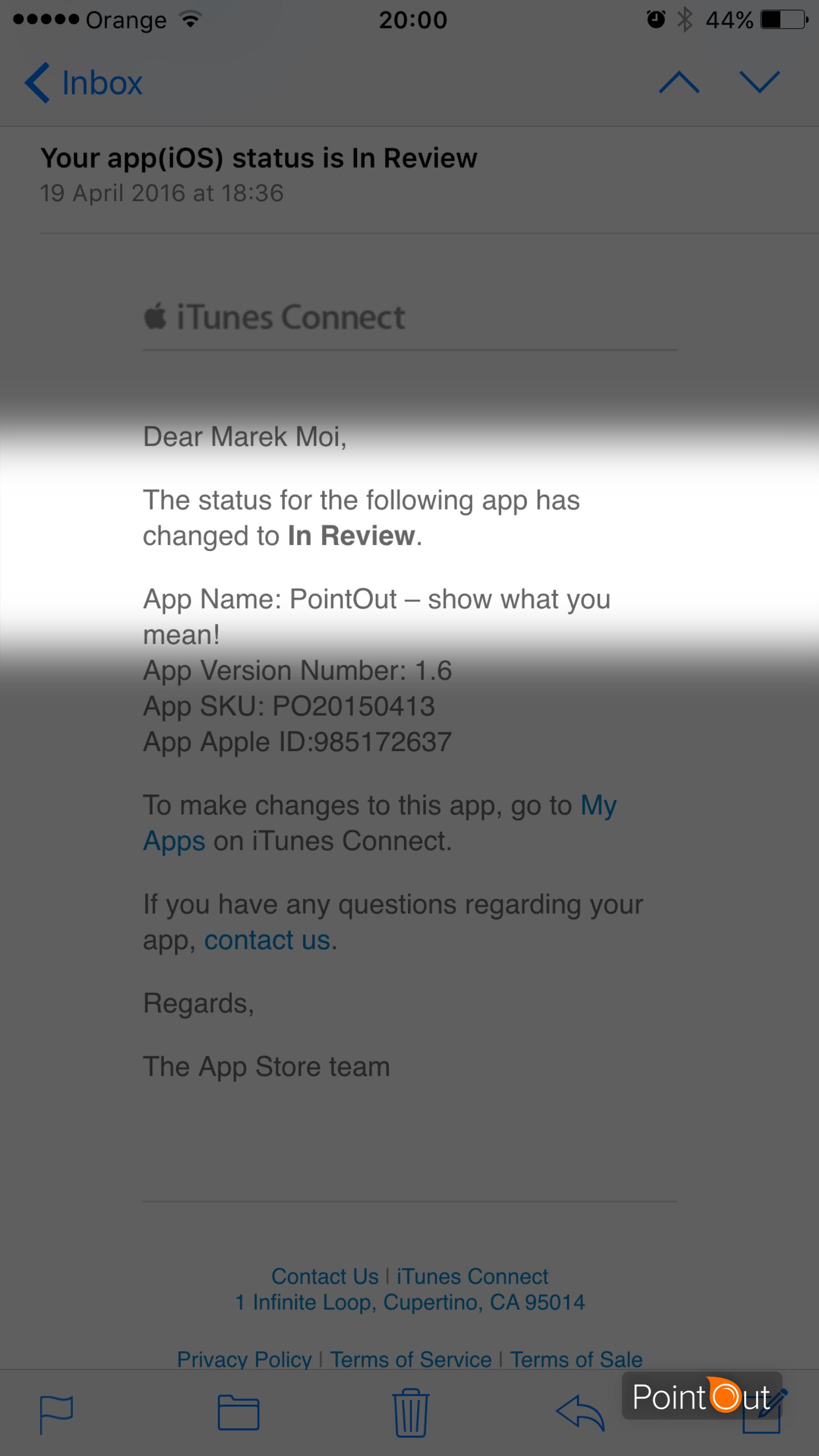 For additional examples like these, check out the online screenshot gallery with some excellent showcase of PointOut’s features and what tools were used, and how, to annotate sample images.

PointOut was crafted in Poland by indie developer Marek Moi.

To learn more about this app, check out the official website.

PointOut requires an iPhone, iPod touch or iPad with iOS 8.0 or later. The app is English-only and can be downloaded free of charge from the App Store.

If you’ll be using PointOut on a regular basis, I suggest you award the developer’s hard work by buying him a virtual cup of coffee via the In-App Purchase mechanism, which unlocks the watermark/logo tool.