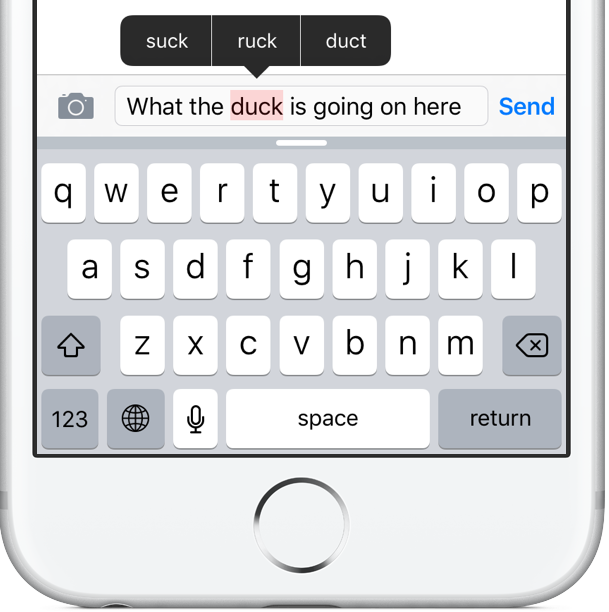 There probably isn’t a single iPhone user on this planet that hasn’t experienced the “joys” of the Auto-Correction feature interfering with their messaging. Auto-Correction mistakes often produce hilarious miscommunications (there’s a website for that).

Whether or not you’re a heavy typist, you’ll appreciate that Apple’s been researching ways to improve Auto-Correction, according to a patent application that surfaced yesterday in the United States Patent and Trademark Office’s (USPTO) database.

Cryptically titled “Device, method and graphical user interface for visible and interactive corrected content,” it envisions highlighting auto-corrected words in an iMessage for the recipient and a built-in Messages feature for streamlining the process of clarifying what the sender meant.

As you know, the Auto-Correction feature on iOS and OS X currently does not highlight any corrected words or phrases. Granted, Dictation does underline the words it’s unsure about, but on the sender’s, not the recipient’s end.

Apple proposes a system in which the recipient would see autocorrections highlighted on their end. If the message is unclear due to Auto-Correction, the recipient could use an “Ask for clarification” feature as a way of quickly asking the sender to better explain what they meant without needing to type out any message whatsoever.

In one of the examples provided, a person asks a friend when the meeting is. The sender types out their response, saying “It was moved to tomorrow at 11. Bring lunch.” But, the Auto-Correction feature kicks in, correcting the word “bring” to “being”.

The end result: a confusing message.

The recipient sees the word “being” underlined, an indication that this is an auto-correction of the original word (which they cannot see). By tapping the Request Clarification link right underneath the received message, the recipient prompts iMessage to ask the sender to explain what they meant.

iMessage goes to work and issues an automated message that asks the sender, on the recipient’s behalf, “You sent ‘being’. What did you mean?” Instead of typing out a corrected message in full, the sender would simply tap on the autocorrected word of their message and “Send Clarification” to the recipient.

iMessage kicks in again, automatically sending a canned response to the receiver, saying “I sent ‘being’, but I meant ‘bring’.” The sender would also have the option to resend a corrected message, if they want.

The patent application was filed for in July 2015 and credits Apple engineer Christopher J. Hynes as its inventor. How do you like Apple’s imagined clarification process and what should they do to improve the Auto-Correction feature, in your personal opinion?

Is this patent ever going to be implemented across iOS and OS X, do you think?

We’ve extensively covered disabling Auto-Correction on iOS and turning it off on OS X in the past. If you’re interested in other Auto-Correction tips and tricks, see our archive.