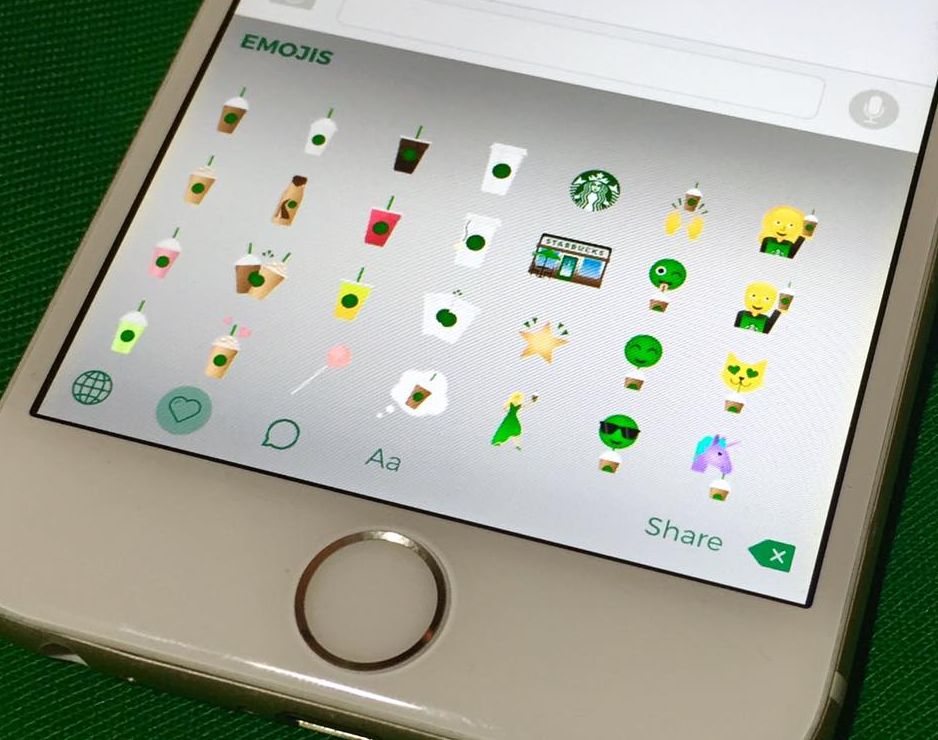 Apparently, software keyboards for the iPhone have become a must for brands. Earlier this morning, Microsoft released Word Flow for iPhone, its gestural Windows 10 keyboard with one-handed typing and predictive text input.

And now, Starbucks has jumped on the bandwagon and released an iPhone keyboard of its own.

Available for free from the App Store, Starbucks Keyboard lets you add a little personality to your emails, texts, social media posts and more with branded “emojis” like Frappuccino blended beverages, iced tea, coffee and even a purple unicorn sipface.

It’s a nicely done app that shows potential, but I dislike the fact that they’re advertising it as an emoji keyboard because these things are more of stickers that get pasted as image attachments.

Not real emojis after all

“They say emojis are worth 1,000 words, so say it with Starbucks keyboard—the easiest way to show your friends some emoji love via iMessage, Facebook Messenger, WhatsApp, email and more,” reads the blurb. So far so good: Starbucks Keyboard is a decent 1.0 release and some of the emojis really are amusing and unique, but…

My quibbles with Starbucks Keyboard

For starters, you must copy and paste the emoji into the text field instead of being able to just select the emoji in order for it to get automatically pasted. Worse, Starbucks’ emojis are not rendered as characters, like normal emojis are. Rather, they’re actually images and as such get pasted into your chats.

Of course, getting the Unicode Consortium and other standardization bodies to approve these Starbucks-branded images as actual emoji characters is easier said than done, leading me to believe this particular issue will hardly change for the better anytime soon.

Next, the keyboard itself also isn’t very well integrated with iOS.

I’d give them a pass on that, but many functions normally found on third-party keyboards are nowhere to be seen in Starbuck’ app. Speaking of teething issues, I should point out that I couldn’t get the keyboard to work with Facebook—Starbucks emoji just wouldn’t get pasted—and I’ve also had hiccups using it with Snapchat.

I’m hoping the experience will improve with subsequent updates.

For what it’s worth, I’d prefer them to drop the requirement to grant Starbucks full access to the keyboard because that’s really unnecessary.

Aside from the pain points I just mentioned, I’ve had no other major issues with Starbucks Keyboard. It’s decently done (for a 1.0 release), fun and easy to use and, most importantly, it does have potential—you should give it a whirl to see if you like it.

Like other third-party software keyboards that are available on the App Store, this keyboard can be easily added on your device once downloaded. Simply go to Settings → General → Keyboards → Add New Keyboard and select Starbucks Keyboard from the subsequent list.

The app is also available for Android on the Google Play Store and Starbucks has promised to refresh in-app content and add new “emojis” throughout the year.

Starbucks Keyboard requires an iPhone, iPod touch or iPad with iOS 8.0 or later. The app is English only and you can download it for free via the App Store.