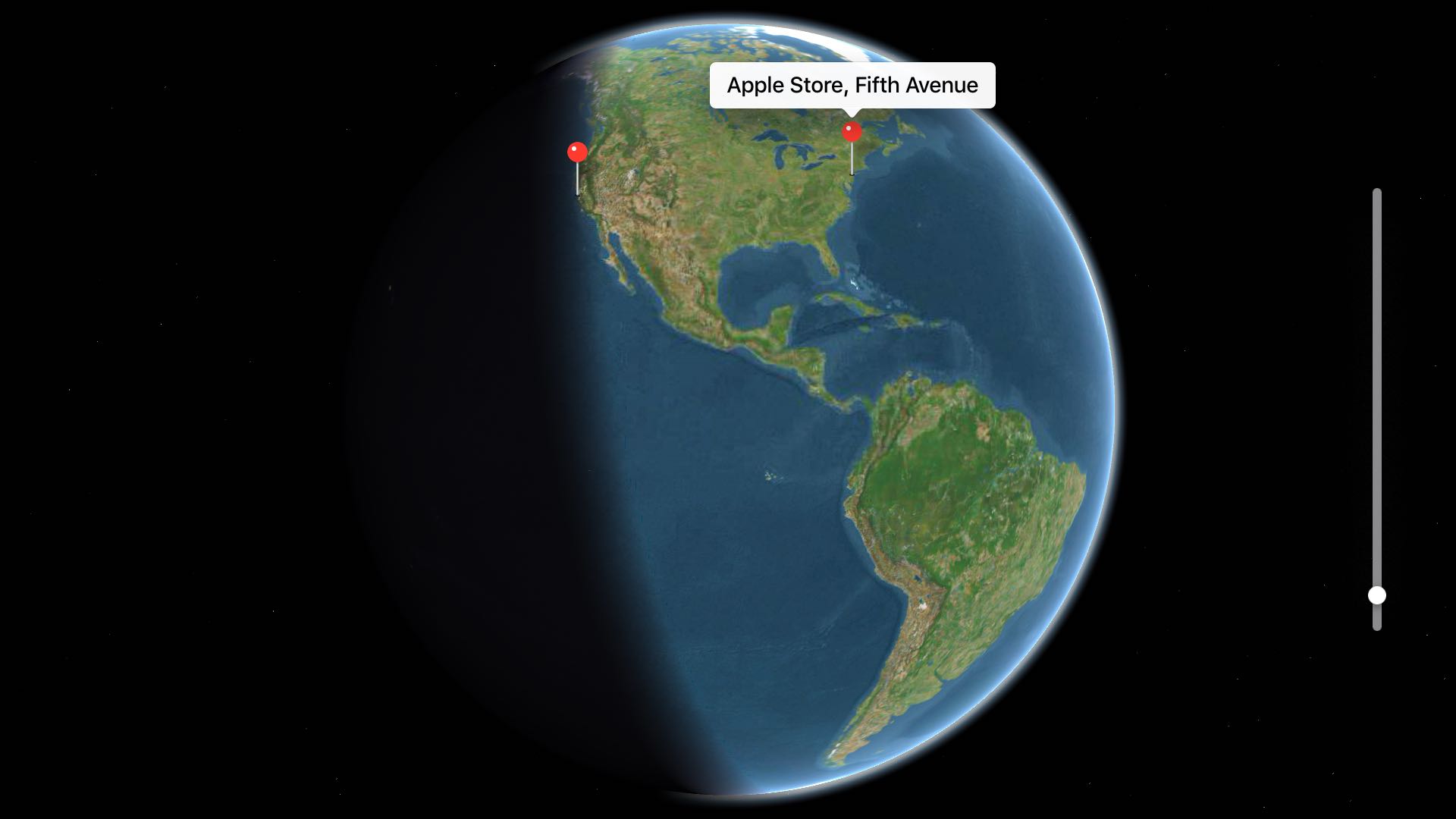 Since learning that Apple’s software development kit now includes a new MapKit framework for tvOS, I’ve been eagerly awaiting to see what Apple TV developers are going to do with it. I salivated at the prospect of Apple Maps on a big screen telly because it sounded too good to be true.

With TV Maps by Arno Appenzeller—to my knowledge, this is one of the first of MapsKit-enabled apps for the new Apple TV—you can browse Apple Maps from the comfort of your couch. At long last, planning trips on the big screen has become a reality for those of us who’re invested into the Apple ecosystem. The experience of using maps on a television is much cooler than you could imagine: this is the first tvOS app that has made me wish that the Apple TV supported hand gestures so that I could explore maps Minority Report-style.

Apple Maps client, on your TV

With this Apple TV app, you can browse maps, look up places of interest, search for directions or just discover beautiful three-dimensional maps on a big screen through your Apple TV. As you may have guessed, TV Maps includes many of the features supported by Apple’s MapKit framework, including navigation, dropping pins, zooming and panning around, satellite and 3D mode and more. 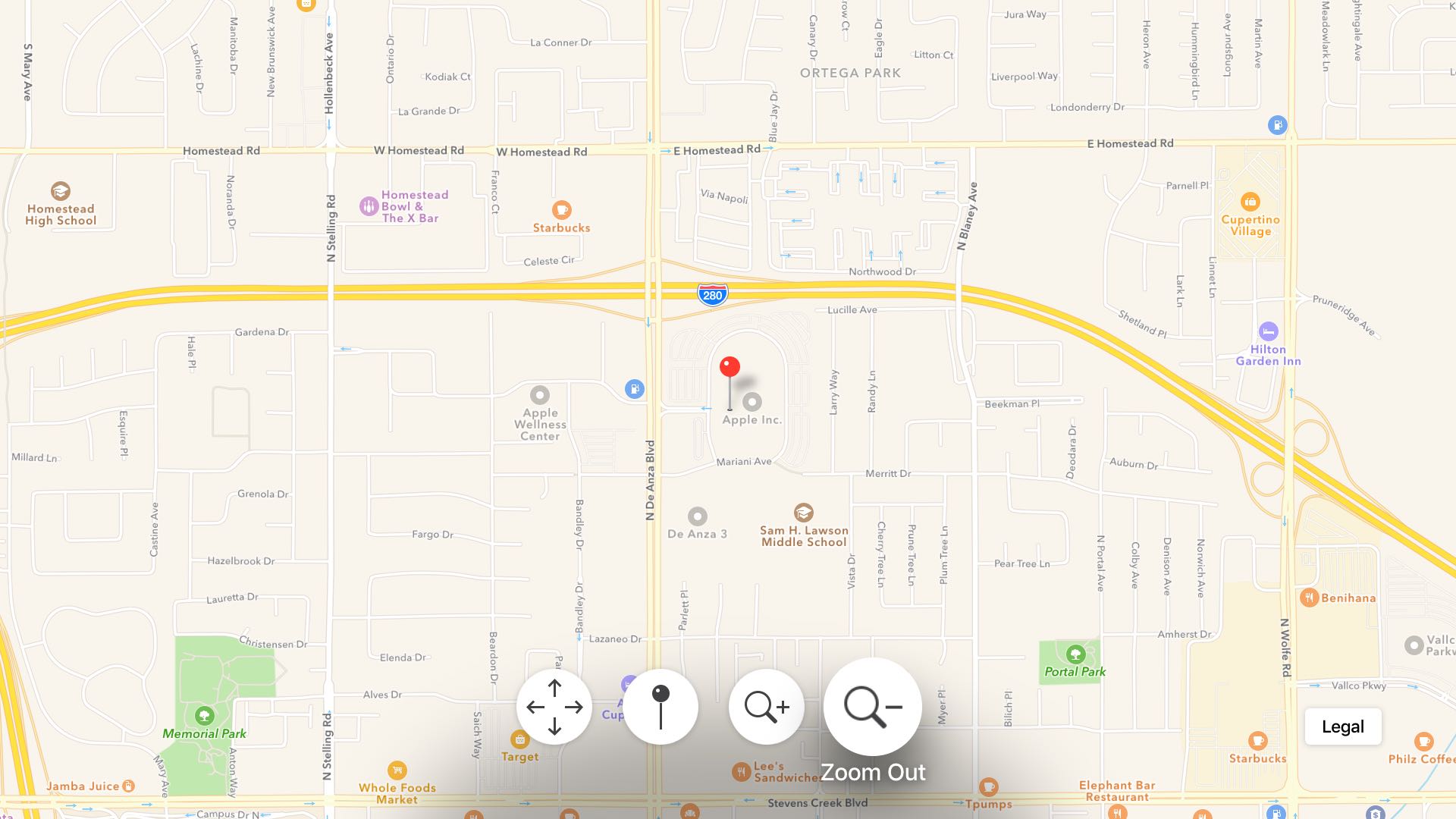 With the companion iOS app, you can easily receive directions you looked up on the Apple TV so that you can start navigation on your mobile device immediately. I’m also pleased that TV Maps supports ‘Made for iOS’ controllers, which makes using it even easier, although it’s perfectly usable with the Siri Remote that came with your Apple TV.

Just to clear up any confusion, TV Maps does really use the MapKit framework, as evidenced on the screenshot of the acknowledgements screen I took inside the app. 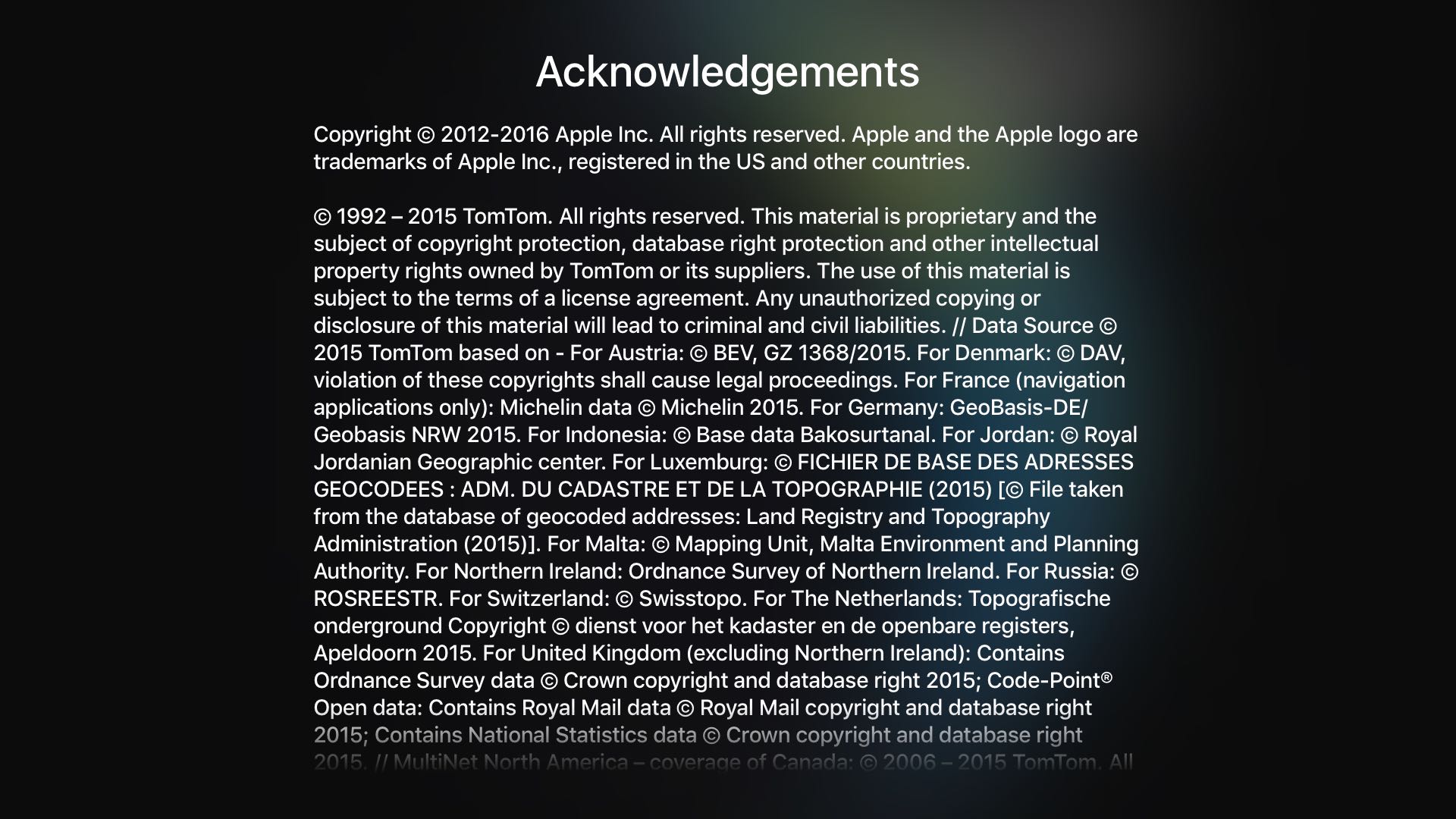 To get started, use the search feature to find specific places. You can type in a place name using tvOS’s convoluted software keyboard or use the new Dictation feature in tvOS 9.2: just press and hold the Siri button on the remote when the search field is selected and dictate what you wish to search for. 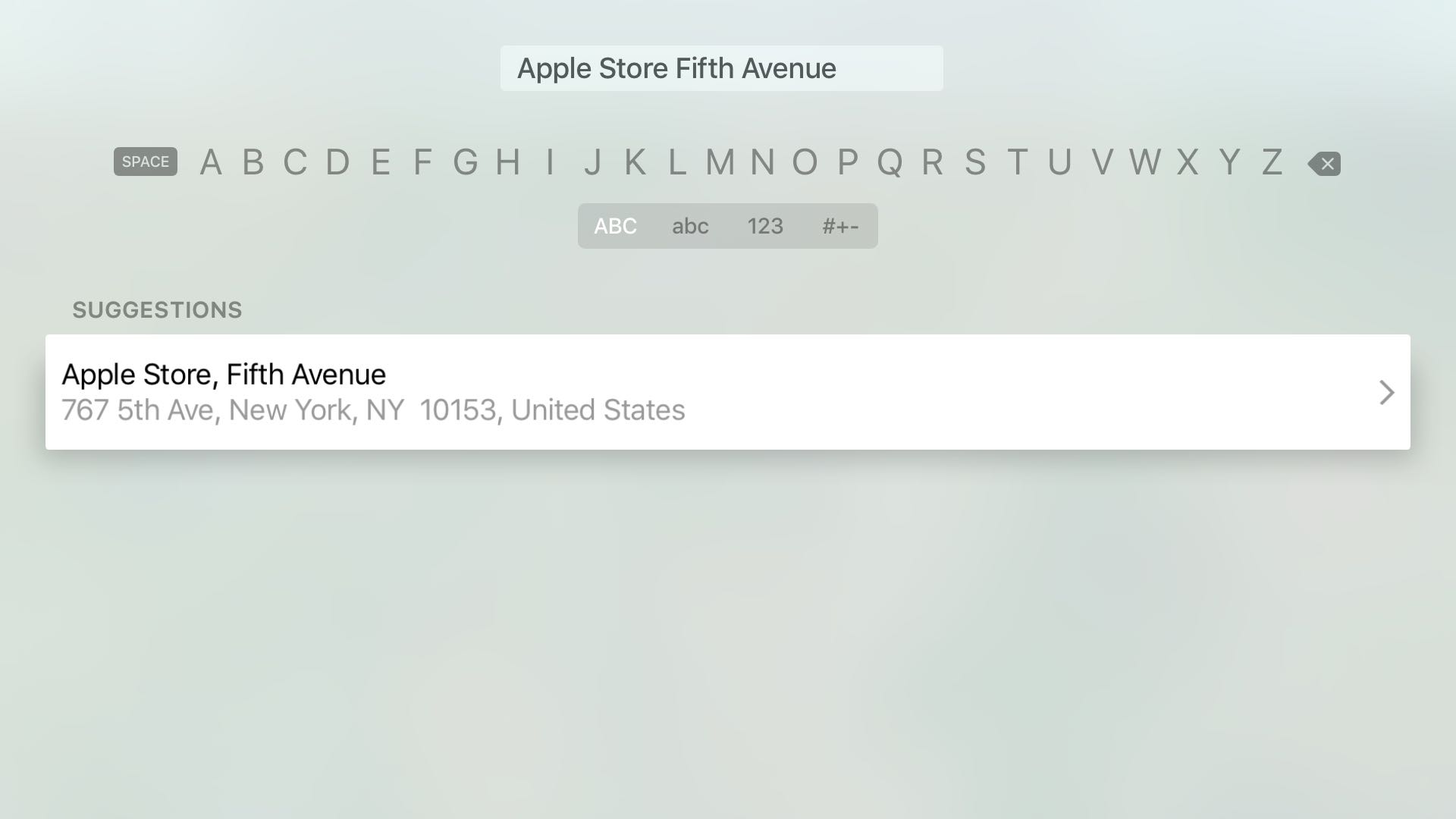 A list of matching and suggested places appear after a few moments.

Highlight a place in search results and press the Touch surface to load the corresponding map. To access additional options, press  the Play/Pause button on the Siri Remote. Use the Touch surface to navigate the map or press and hold it to reveal options at the top for navigation, pins and map views. 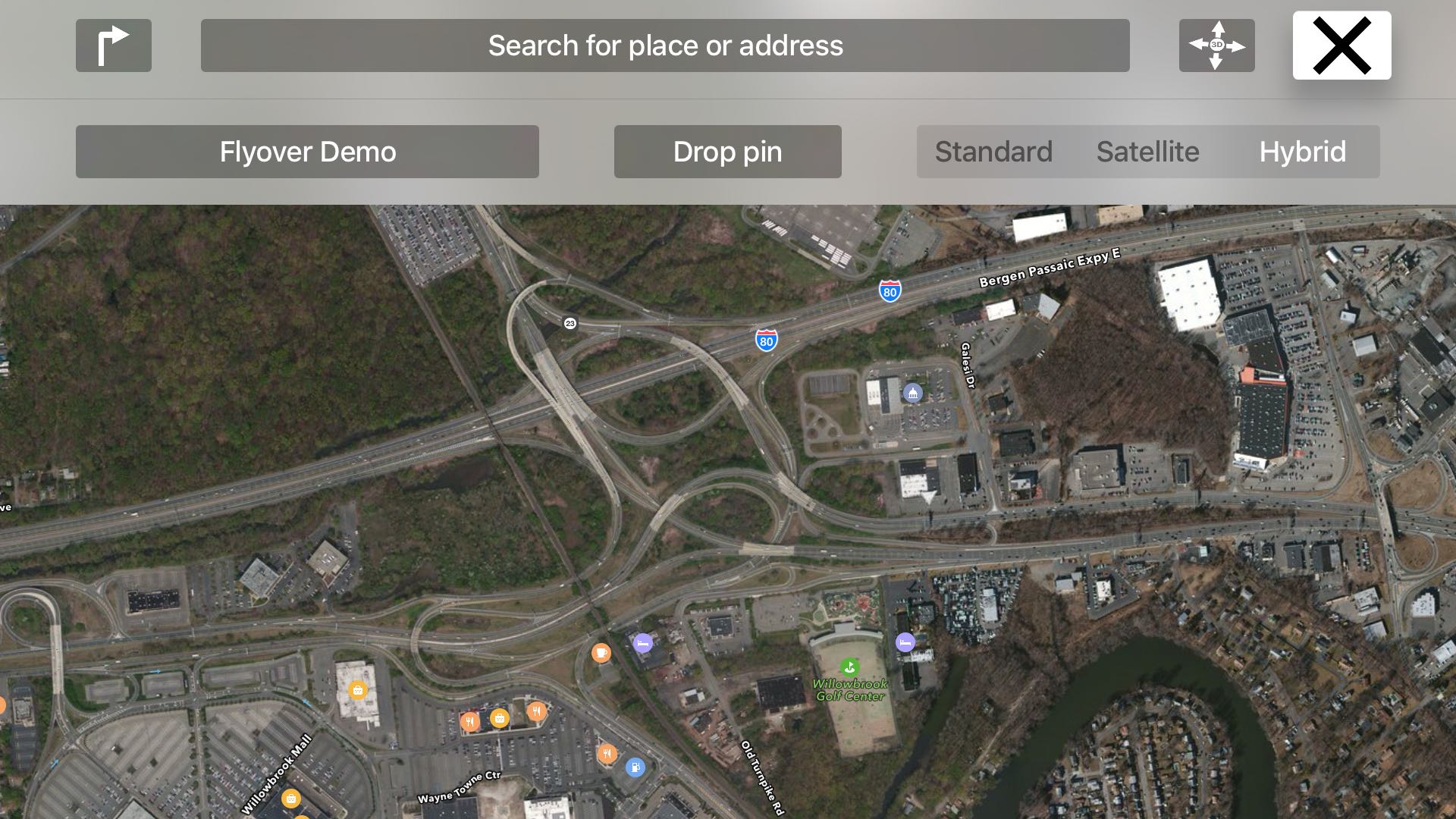 In addition to place search, you can drop pins on the map to select your favorite points of interest, change the pin selection, or remove any pin at will and, yes, enjoy Apple Maps’ beautiful three-dimensional maps in cities and places where available. 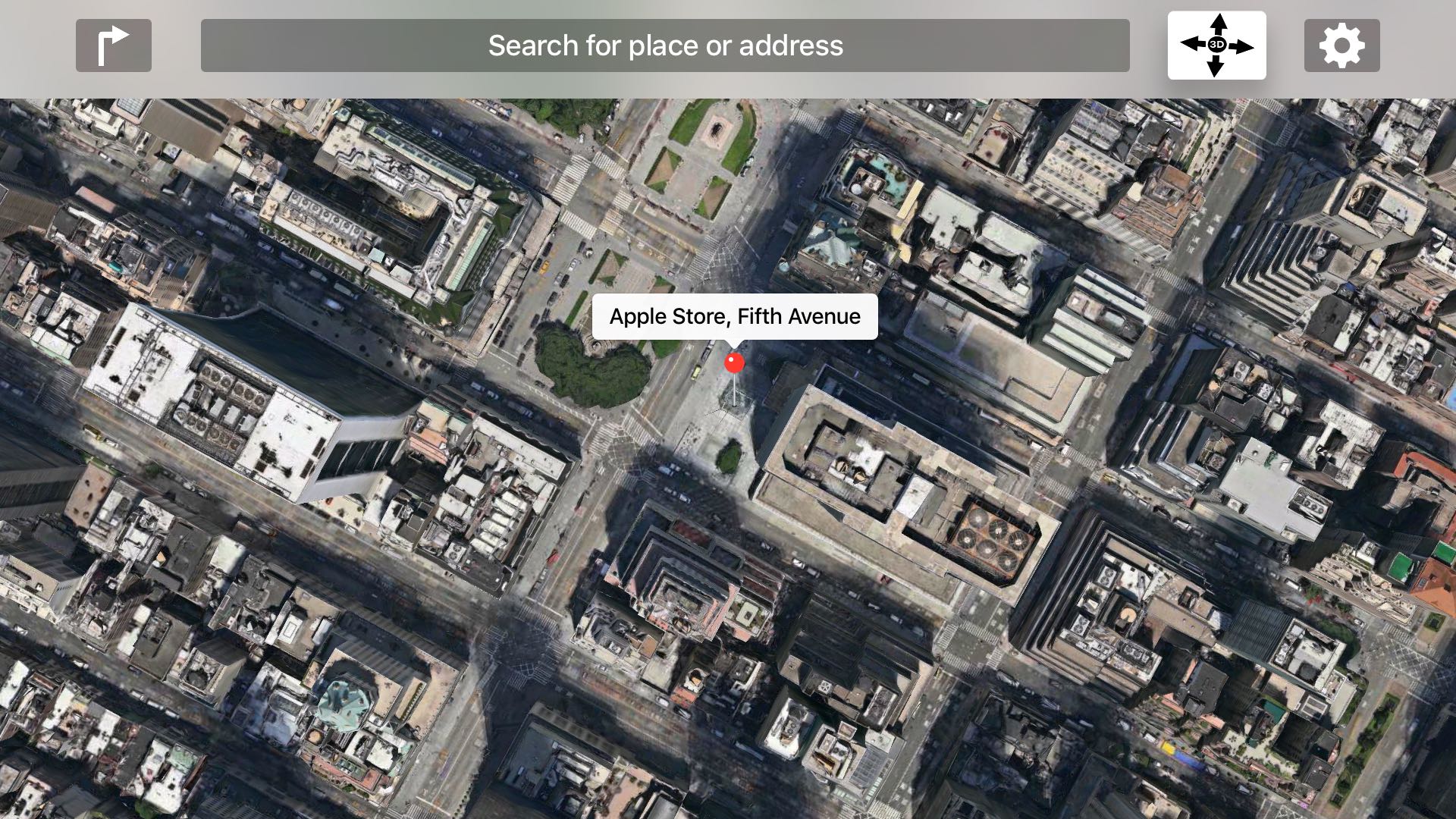 In Flyover mode, you can swipe across the Touch surface to rotate the 3D view or change your point of view. Flyover on a big screen TV looks just like on iOS devices, with one crucial distinction: there’s something inherently fun in being able to explore places in Flyover views on a 50-inch plasma TV, from the comfort of your own couch. 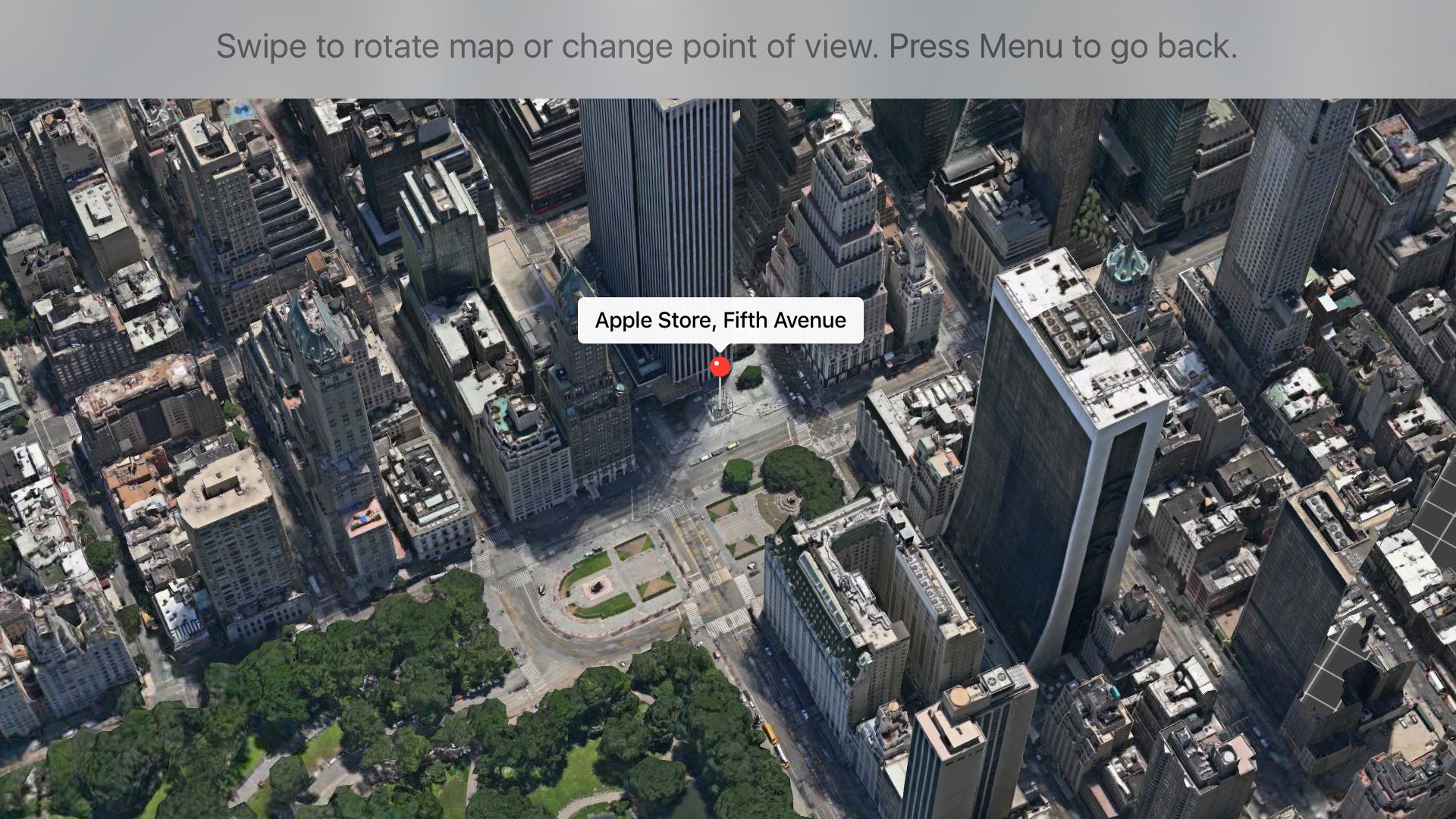 Hold the Play/Pause button, select the gear icon in the menu at the top of the screen, and then select Flyover Demo to begin a random virtual tour in one of the cities that support this feature. As mentioned, Flyover views are completely interactive so you can zoom in and out and rotate the view to explore buildings and landmarks in 3D. 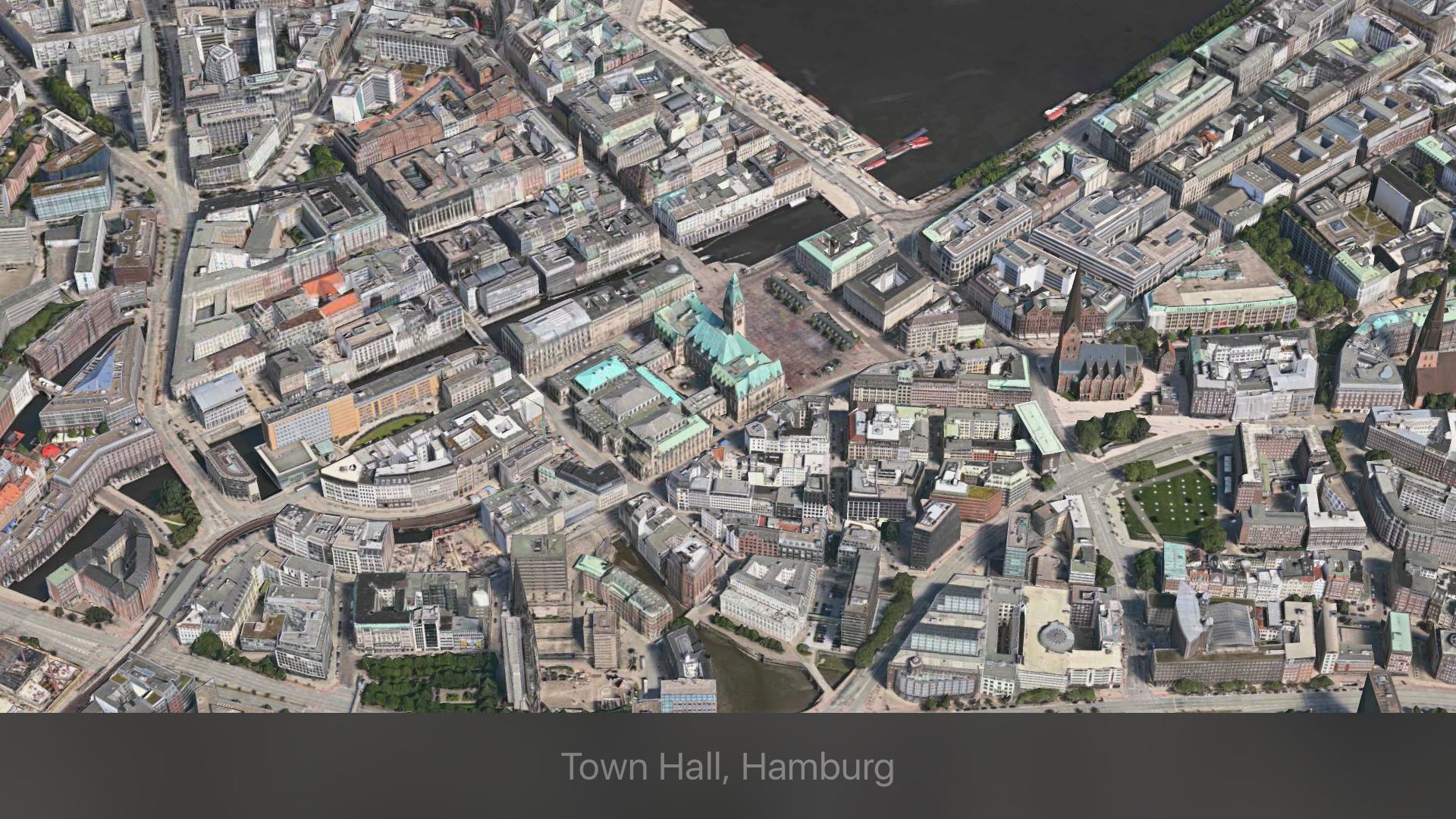 The top menu also lets you switch between Standard, Satellite and Hybrid views. And if you zoom out far enough so that the whole planet is visible, you’ll be able to see the sun’s light as it moves in real-time across the Earth—how cool is that? 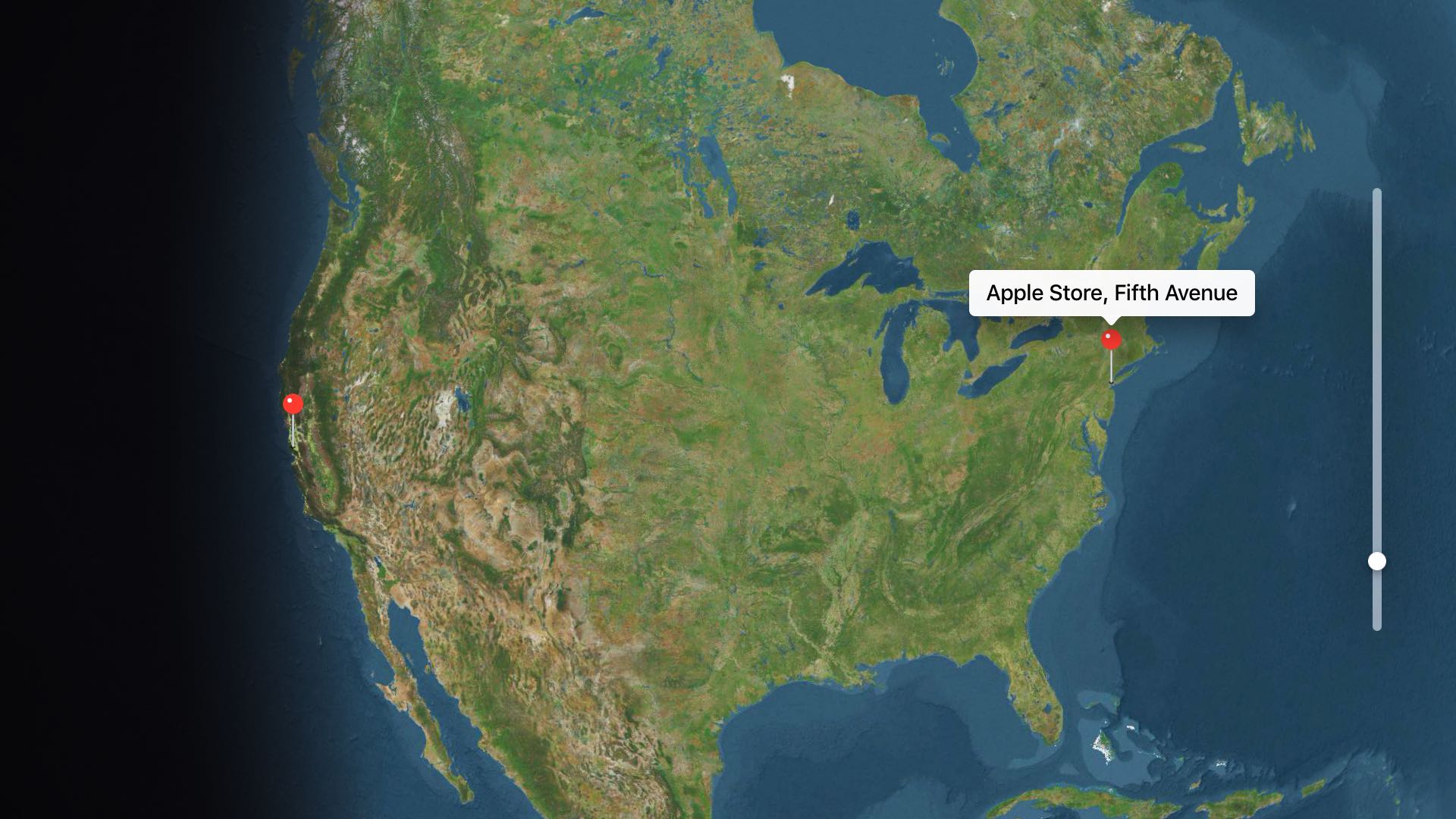 To start navigating, select the navigation icon to the left side of the search field at the top and type or dictate your start and end points. Any previously searched places will be available under the Recent heading—I’m all for solutions that require me to use tvOS’s software keyboard as seldom as possible. 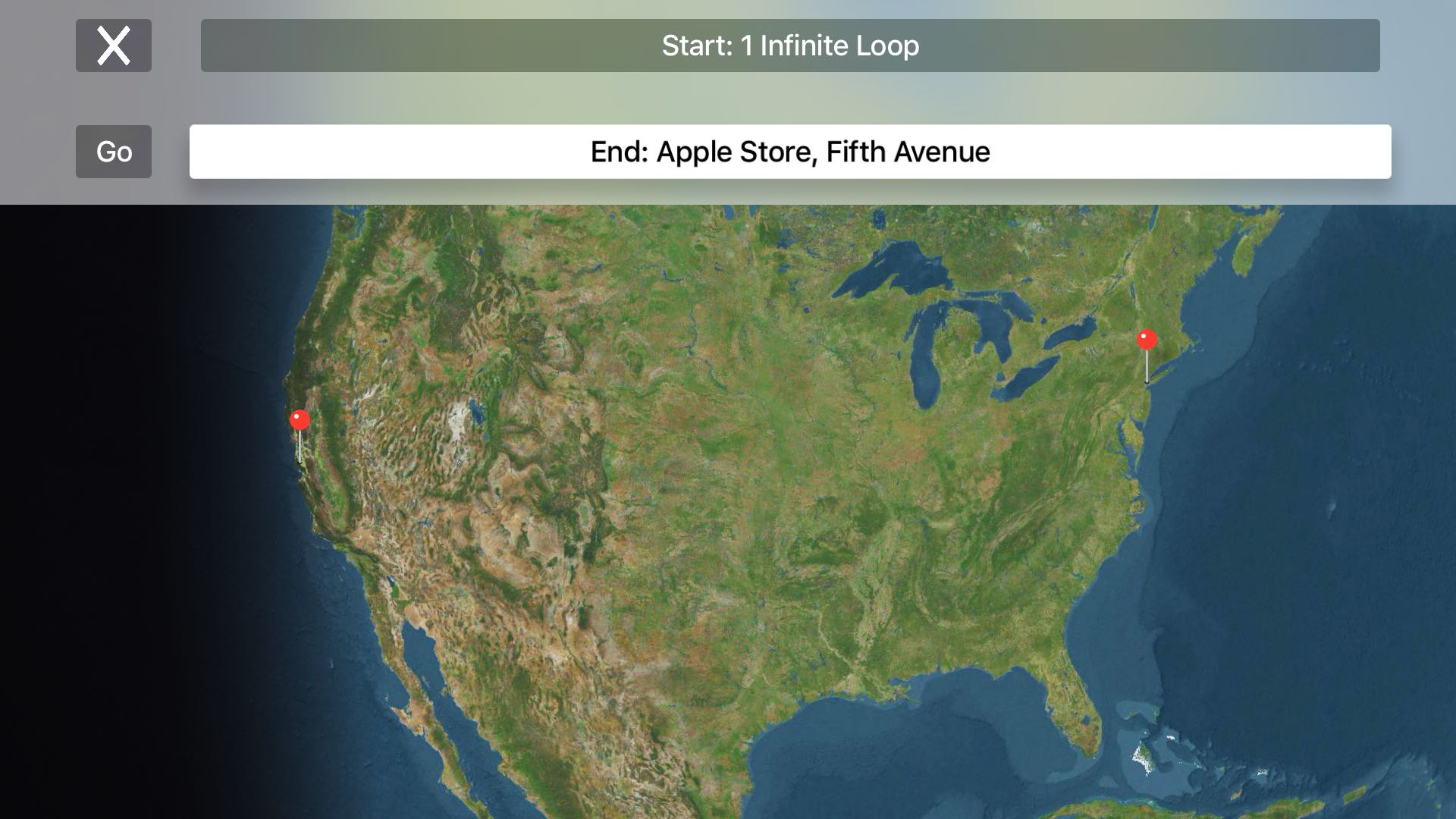 In navigation mode, you can choose alternate routes, like on Apple Maps for iPhone. Unfortunately, you cannot select between walking or driving routes as the Apple TV app seems to default to driving directions, but I’m fine with that. 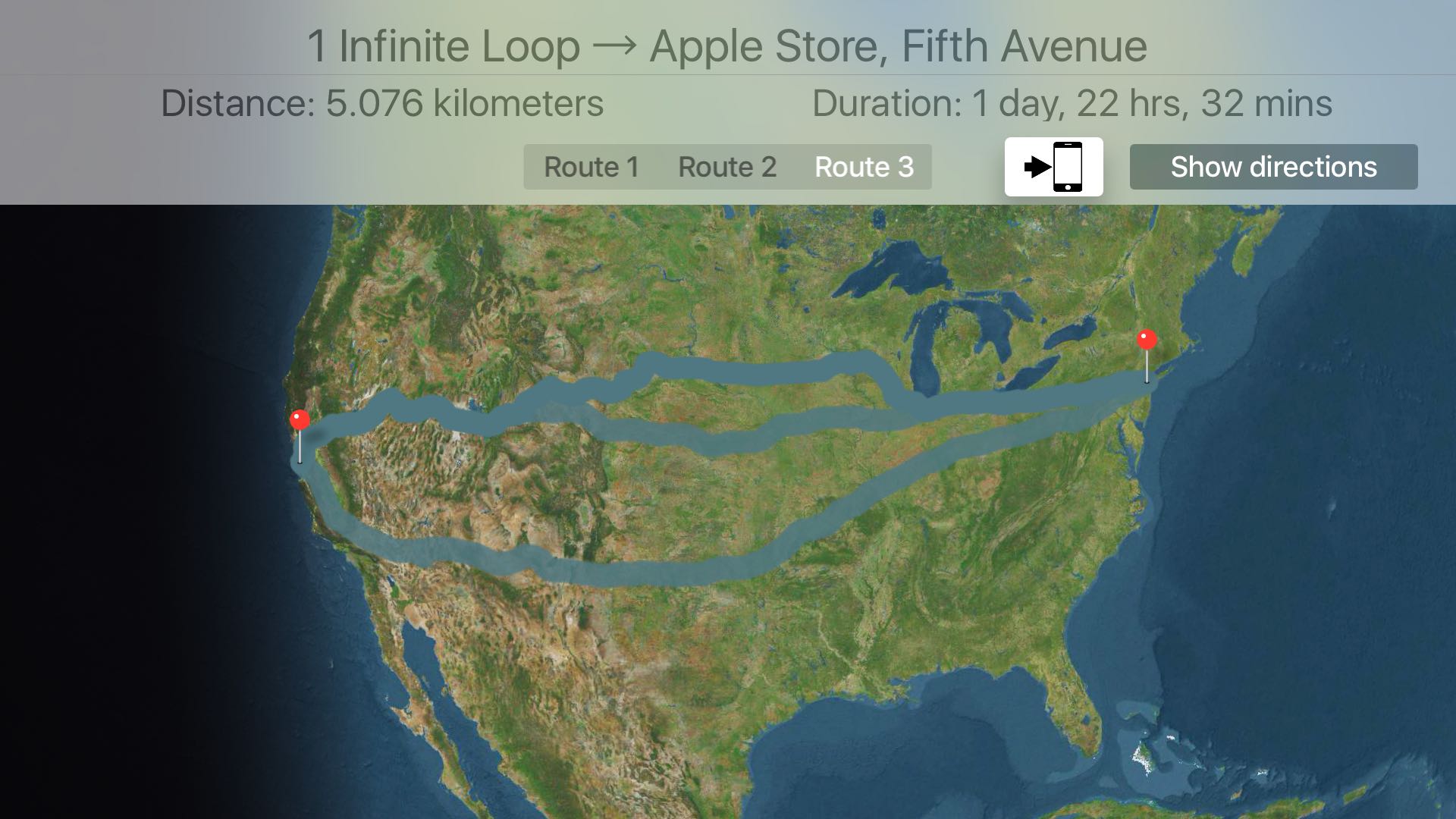 To review individual turns along your route, hit the arrow controls on the screen. 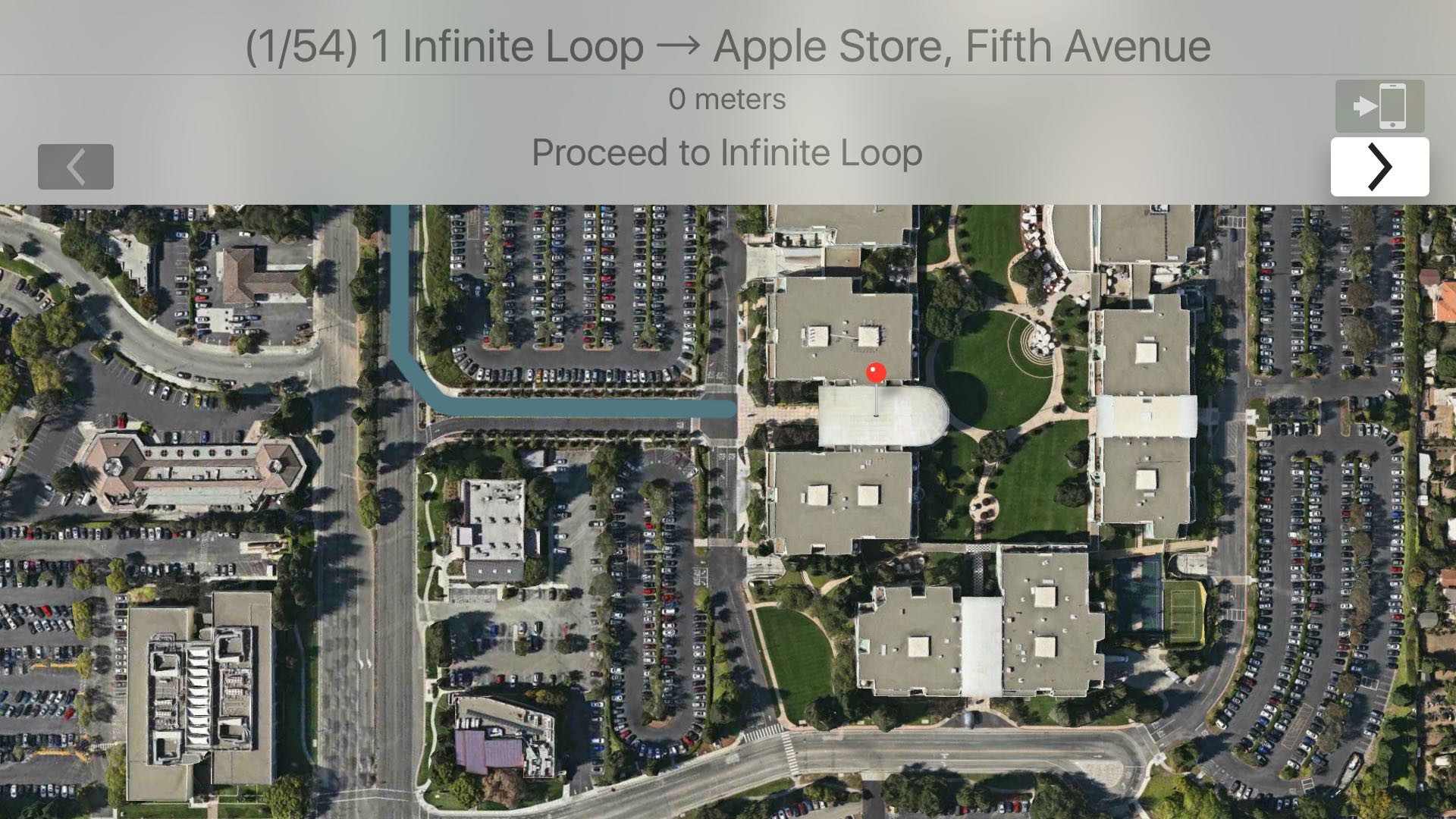 With each new turn, the map scrolls accordingly. 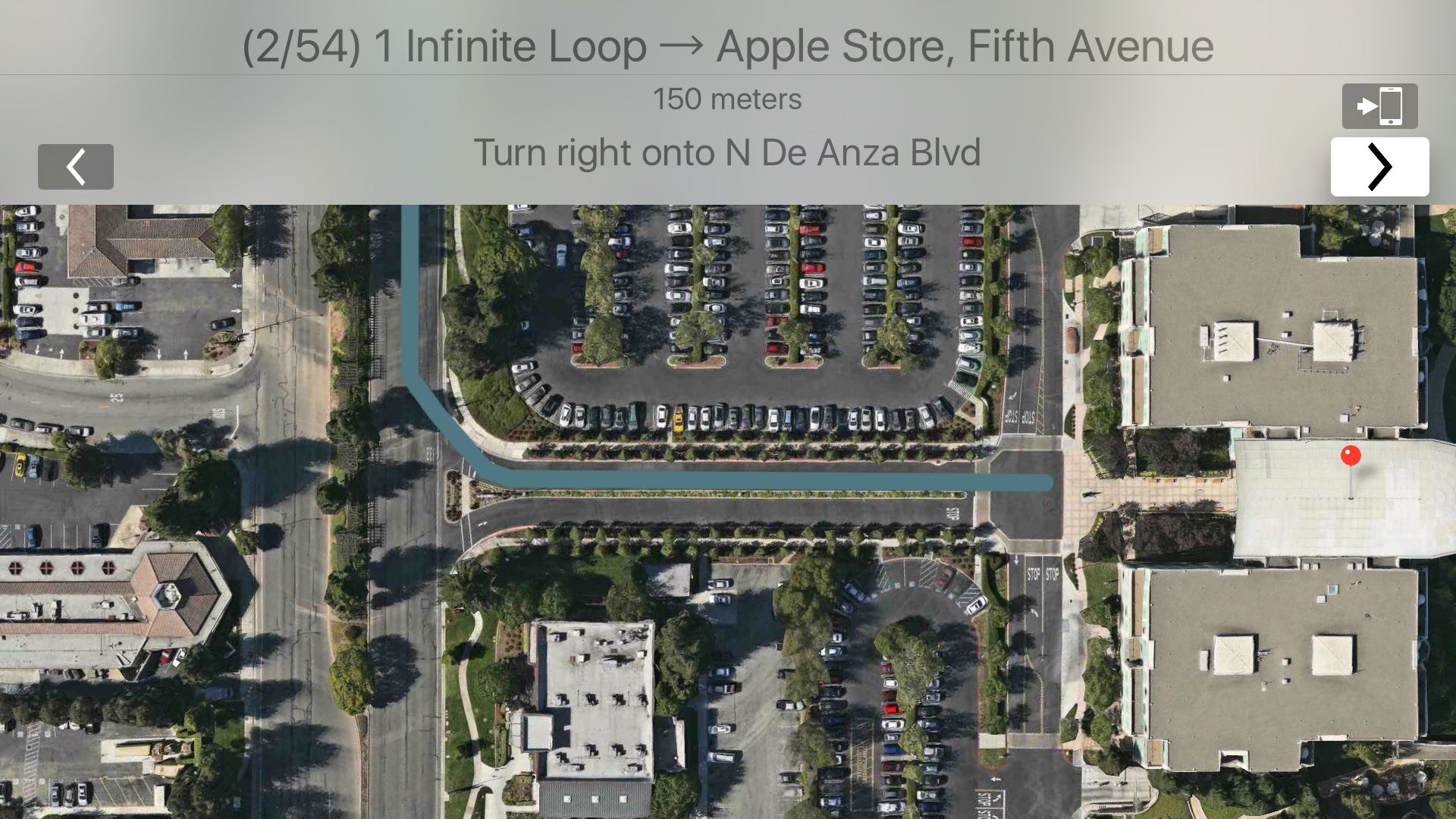 Of course, you’re not really going to be navigating by lugging your big screen TV around so TV Maps supports sending directions to the helper app on your iOS device. Just select the iOS device icon in the menu to send your route to an iOS device. 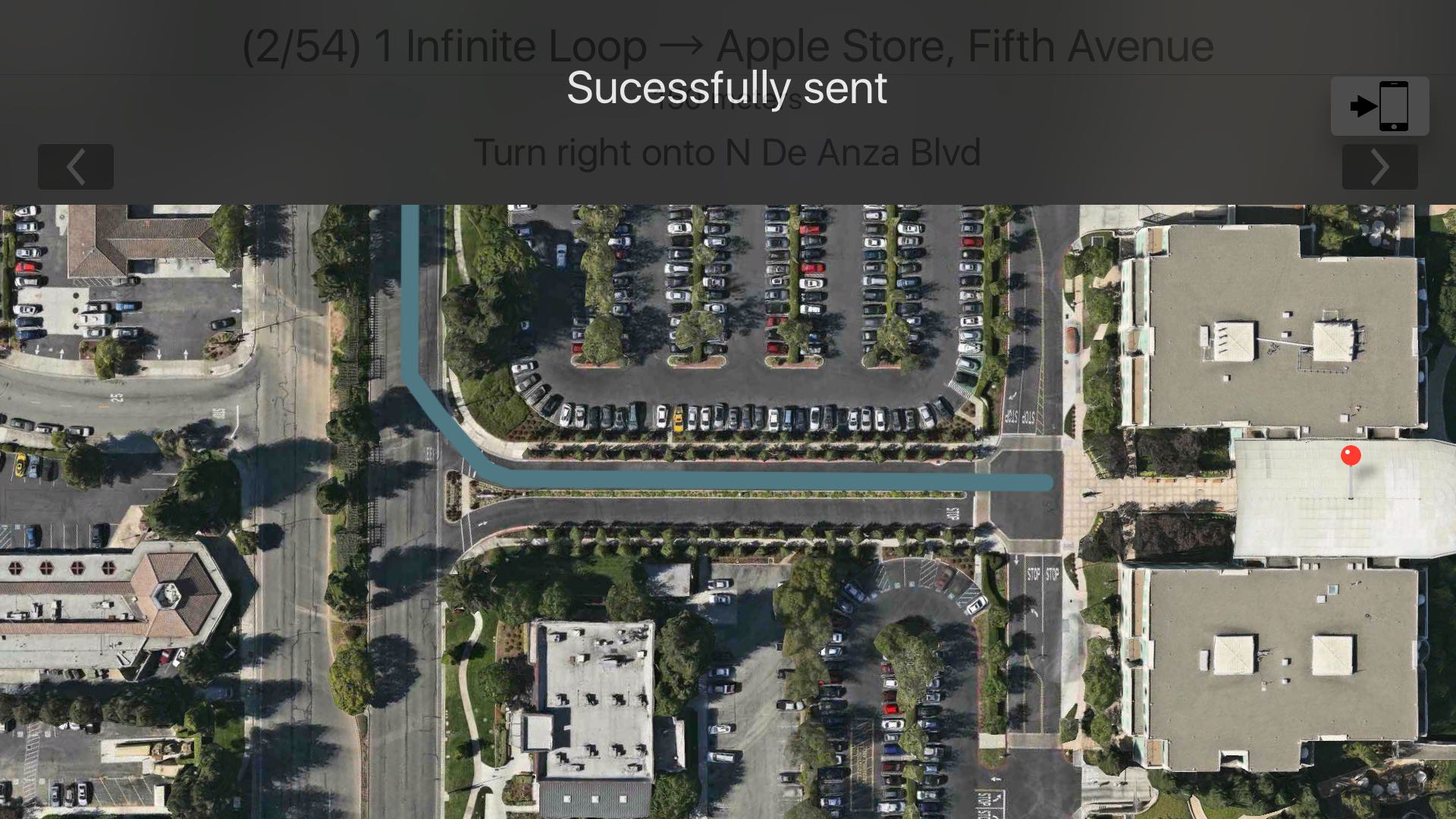 A notification pops up informing me that a new route has been detected. 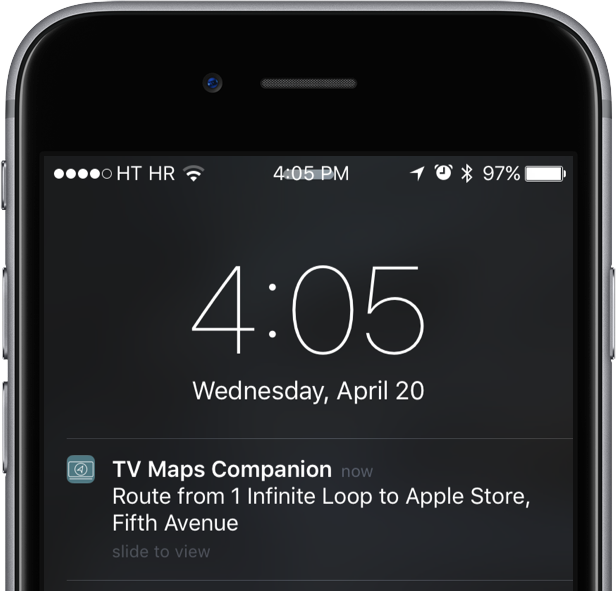 You cannot use it to browse Apple Maps, explore places and check out routes like in the tvOS edition of the app, but I’m fine with that. On a final note, the companion app will keep a history of all your routes created in the Apple TV app in case you quickly want to revisit one and start navigating right away. 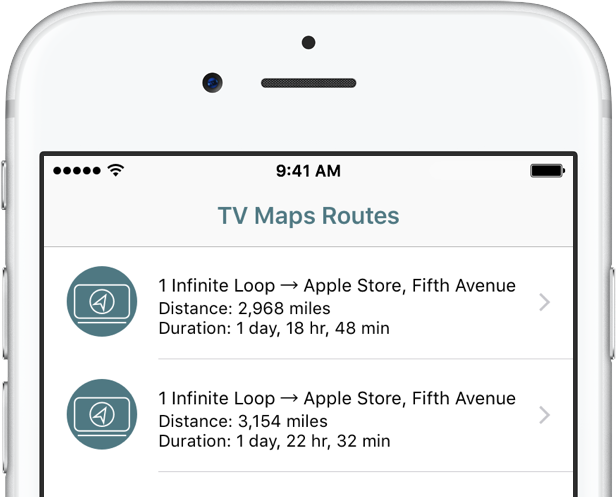 How long until Apple officially creates a Maps app for the new Apple TV, do you think?

As I mentioned, seeing Apple Maps in glorious 3D on the biggest screen in your house is a whole new experience that I wholeheartedly recommended everyone to try out. It’s just fun to look around alone, and I’m not even mentioning the ability to plan trips with your family and discover new places together with your friends.

TV Maps requires an iPhone, iPod touch or iPad with iOS 9.0 or later and a fourth-generation Apple TV with tvOS 9.2 or later. The app is localized in English and German and lacks a native watchOS app for the Apple Watch.

TV Maps for iOS and TV Maps for Apple TV are a bundled purchase. If you buy the app on iOS the Apple TV app is free and the other way round.

You can find TV Maps on the tvOS Store by going to the Purchased tab with the App Store on the device, or search for “TV Maps”.