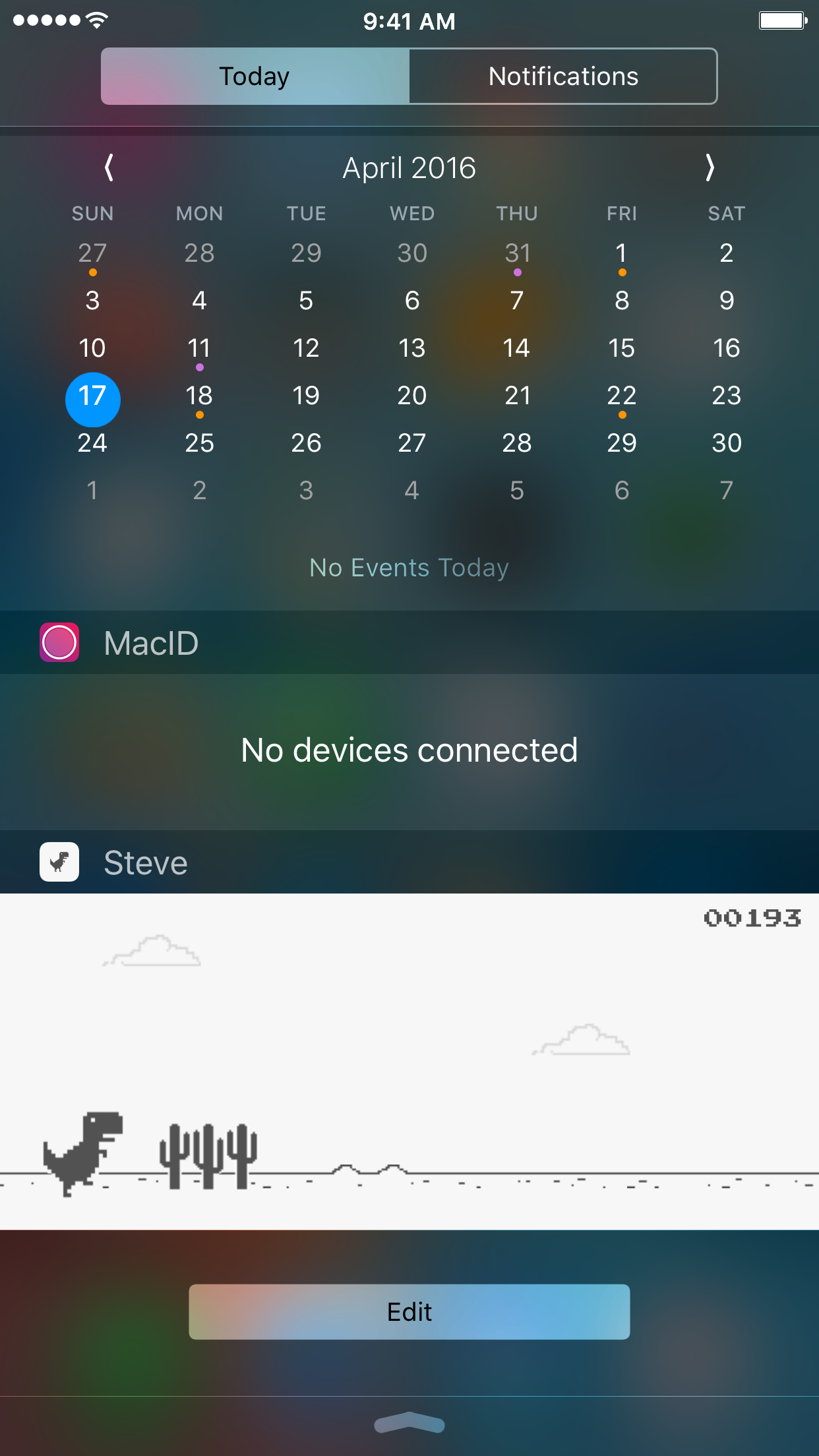 Knowing that Apple has been restrictive in the past on what is and what isn’t allowed to pass in the App Store for a Notification Center widget, it can be fun when little gems find their way into the top charts section and you stumble upon them.

While looking through them, I discovered a free endless runner game called Steve – The Jumping Dinosaur, but unlike other endless runners you’ve played before, this game is played inside of a Notification Center widget rather than from the app itself.

Playing a game from Notification Center

It’s not every day that you get to play a game from Notification Center. Very few of them seem to exist.

Apple is very strict when it comes to what Notification Center widgets are allowed to do, but it seems like they’ve been relaxing their rules a little bit lately, as widgets are appearing to gain more complex functions than ever before.

Nevertheless, it was only a matter of time before someone started to turn these widgets, which were intended to be used as shortcuts, into platforms for games. Steve – The Jumping Dinosaur isn’t the first game to be made for Notification Center, but with its free price tag, high user ratings, and addicting gameplay, I believe it’s worth taking a look at.

Steve – The Jumping Dinosaur is actually the perfect title for this game, because your main character is a dinosaur named Steve, and you will be doing a lot of jumping. It’s an endless runner game that just keeps going, and going, and going…

First off, let me just say that the game is very similar to that of the game you can play in Google Chrome when you are suddenly left without internet.

You simply tap on the widget to jump every time you see an upcoming obstacle, as your main goal is to get as far as you can without dying. A distance counter is displayed for you at the top right of the widget as you are playing and updates in real time.

As you progress, cacti will become less spread out, and your hand-eye coordination will become tested by the higher frequency of obstacles that are trying to make you fail.

At the end, when you happen to die, you’ll be presented with your score and you’ll be alerted whether it’s a new high score or not.

Steve – The Jumping Dinosaur also includes an app that lets you customize the game skin. Although the default is Steve, the dinosaur, you can also pick from any of the following characters, which are available for a $0.99 in-app purchase: 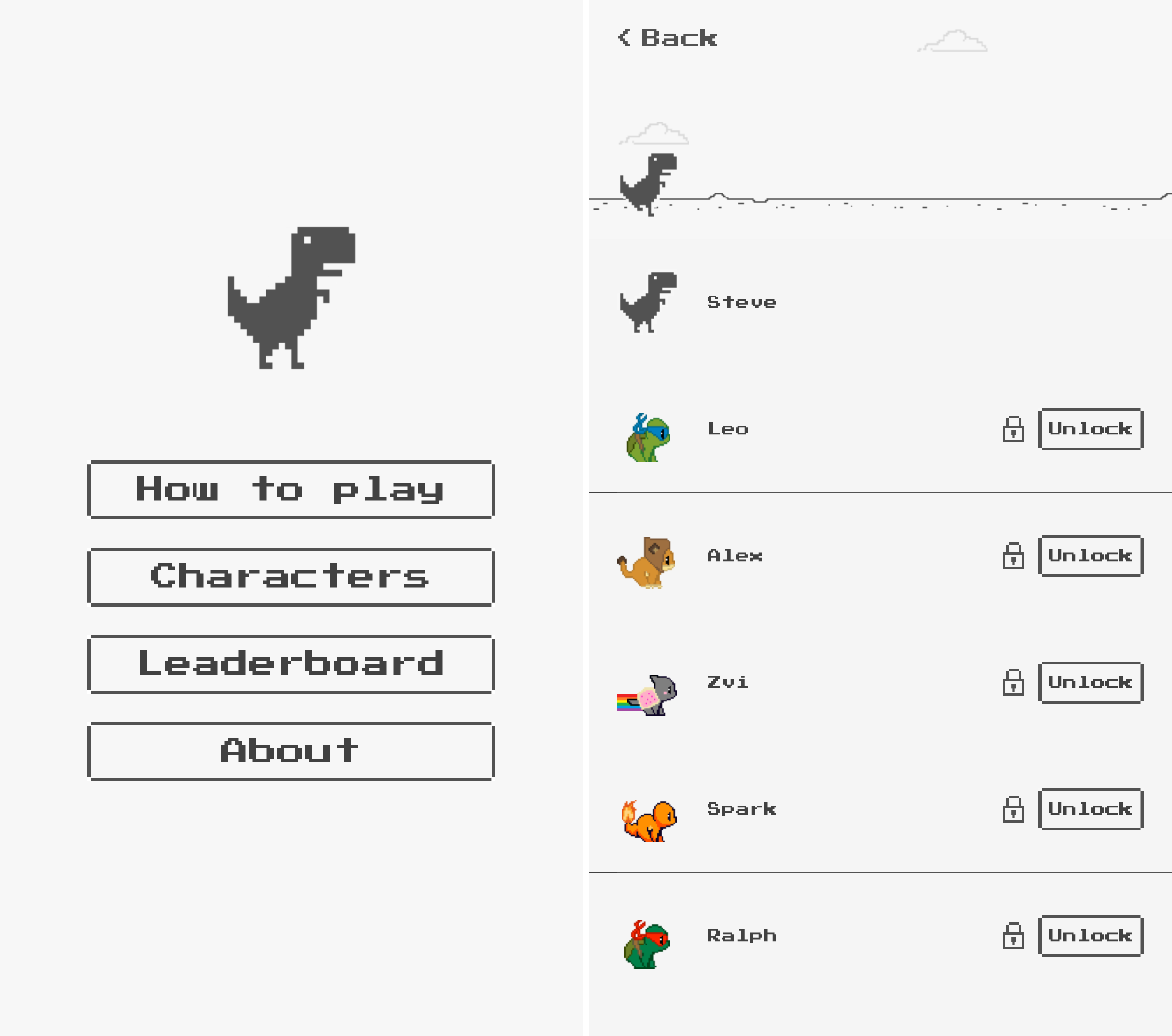 The developer includes a button so you can request your own character, so if you’d like to see a skin for a very specific character, and if enough people ask for it, you just might see it come forth in a future update.

Other features of the game

If you thought that was all the package came with, think again.

Despite being just a Notification Center widget, it’s still a game, and as a result, it comes bundled with its own Leaderboards by way of Game Center so you can compete with other people and challenge your friends for the top score.

The game also includes sounds right from Notification Center, including jumping effects and even a dramatic sound effect when you run into a cactus and die. The sounds are toggled on or off from the widget itself by tapping on the sound button.

Steve – The Jumping Dinosaur is fun game to try out, especially thanks to its free price tag in the App Store. I think it’s a unique take on an endless runner game, simply because you can play it right from Notification Center without even launching an app.

Although it’s not the first game to ever be made for Notification Center, it has some unique qualities to it, and you can also tell that the developer took a lot of care to polish the game and make it special.

Judging my own experience from playing the game, I believe this is a great time-killer for when you’re stuck in a waiting room or you’re bored on your lunch break.

What are your thoughts on playing an endless runner game from Notification Center? Share below!