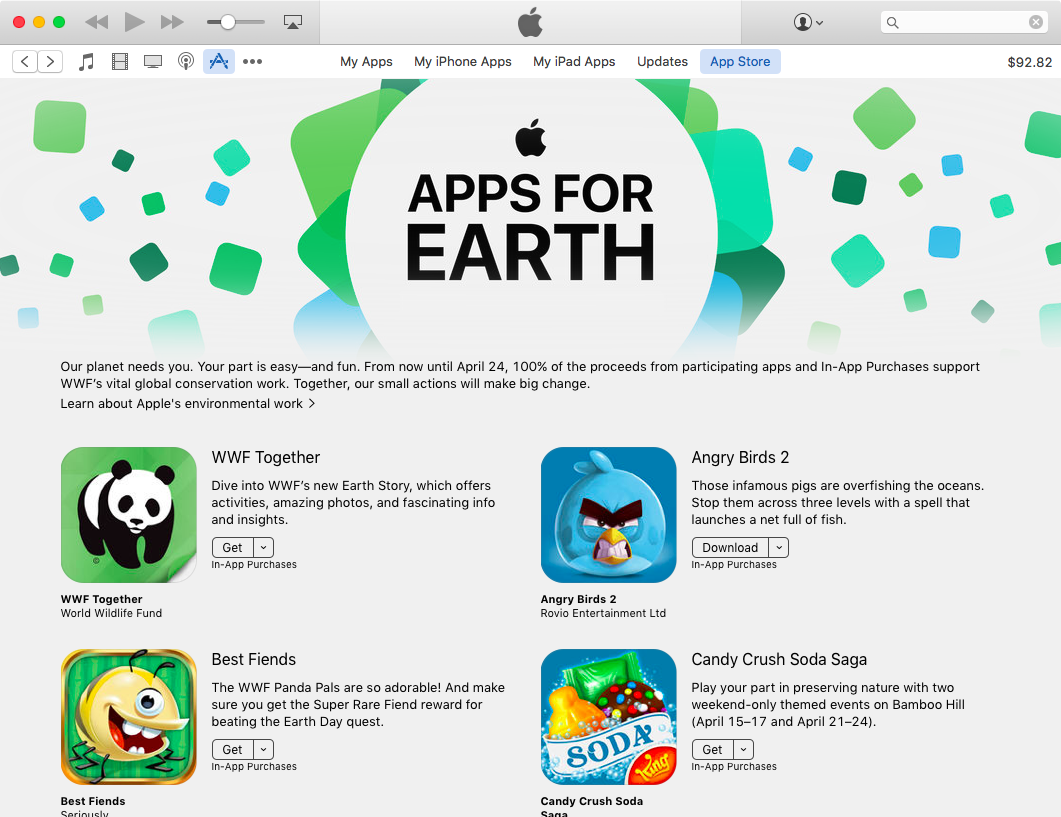 Apple has partnered with the World Wildlife Fund (WWF) on a brand new App Store initiative that will have the world’s leading organization in wildlife conservation and endangered species receive 100 percent of the proceeds from select App Store purchases until April 24, just in time for Earth Day.

Descriptions of participating apps were updated this morning to reflect that “Apple and WWF are working together to protect life on our planet”.

Some of the apps that participate in this initiative include:

“Our planet needs you,” writes Apple. “Your part is easy—and fun. From now until April 24, 100 percent of the proceeds from participating apps and In-App Purchases support WWF’s vital global conservation work. Together, our small actions will make big change.” 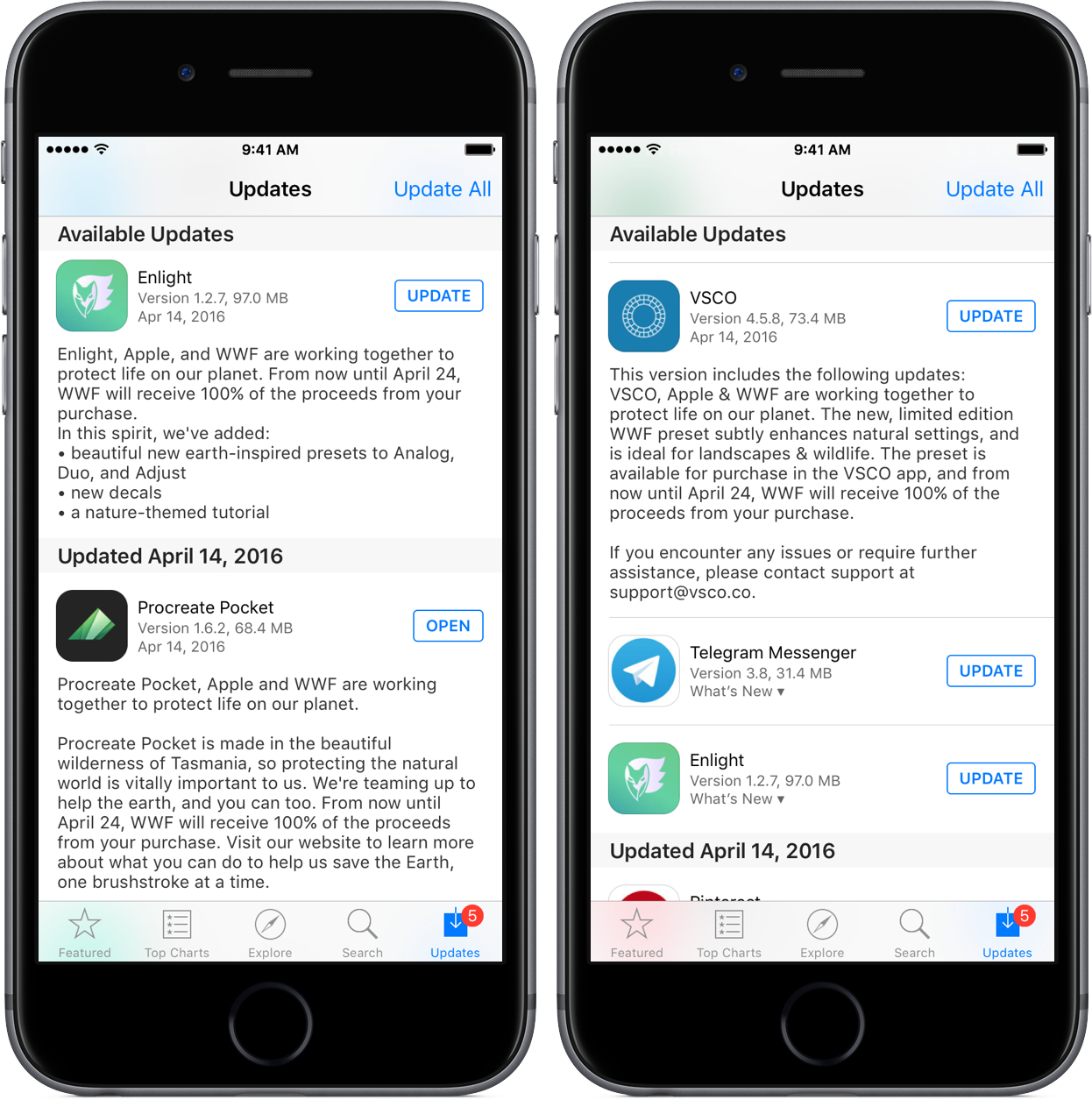 Phil Schiller, Apple’s Senior Vice President of Worldwide Marketing who is now in charge of all developer relationships and Apple’s content stores, tweeted out a link for ‘Apps for Earth’ this morning.

Some apps have gone a step further to include special WWF-tailored content.

As an example, VSCO, one of the best camera apps available, offers a limited-edition WWF preset which will subtly enhance natural settings and as such is ideal for landscapes and wildlife, as per the app’s App Store description.

“The preset is available for purchase in the VSCO app, and from no until April 24, WWF will receive 100 percent of the proceeds from your purchase,” developers wrote. Free apps that participate in this project have been refreshed with WWF-related In-App Purchases to help the cause, too.

Apple on its part has partnered up with the E.O. Wilson Biodiversity Foundation to create Earth Day lessons for students on iPad.

“Learning about the environment is the first step to preserving it,” the app’s description reads. “We’ve partnered with the E.O. Wilson Biodiversity Foundation to create Earth Day lessons on iPad to help students explore, understand, and celebrate the world around them.” 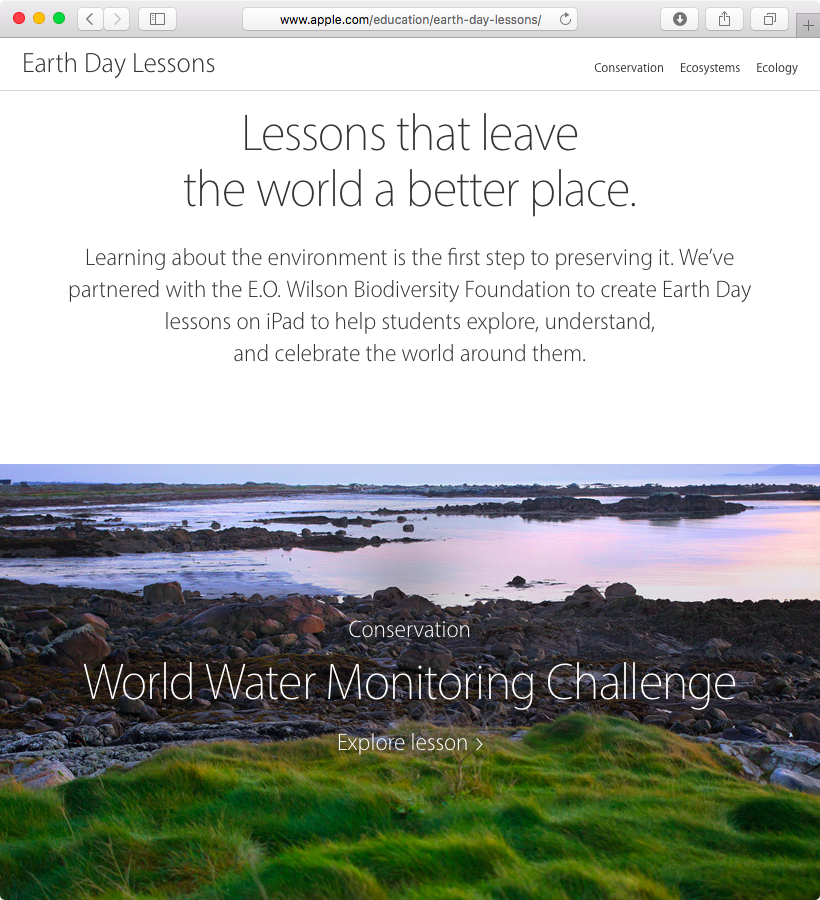 The following WWF-themed Earth Day lessons are available from Apple:

The complete selection of all Earth Day Lessons can be found on the Apple website.

Apple in May 2015 launched a multi-year partnership with World Wildlife Fund to significantly increase responsibly managed forests across China. The forestland program was designed to protect as much as one million acres of responsibly managed working forests which provide fiber for pulp, paper and wood products.

World Wildlife Fund’s WWF Together app was also updated in the App Store today to reflect that 100 percent of the sales from people who purchase the Earth story within the app will go to the fund.

A limited-time purchase, the Earth store offers “exclusive new interactions, content and share experience”. On the iPhone, the updated app now lets you race a jaguar, try and out-jump a snow leopard and explore 360 images of ten species habitats.