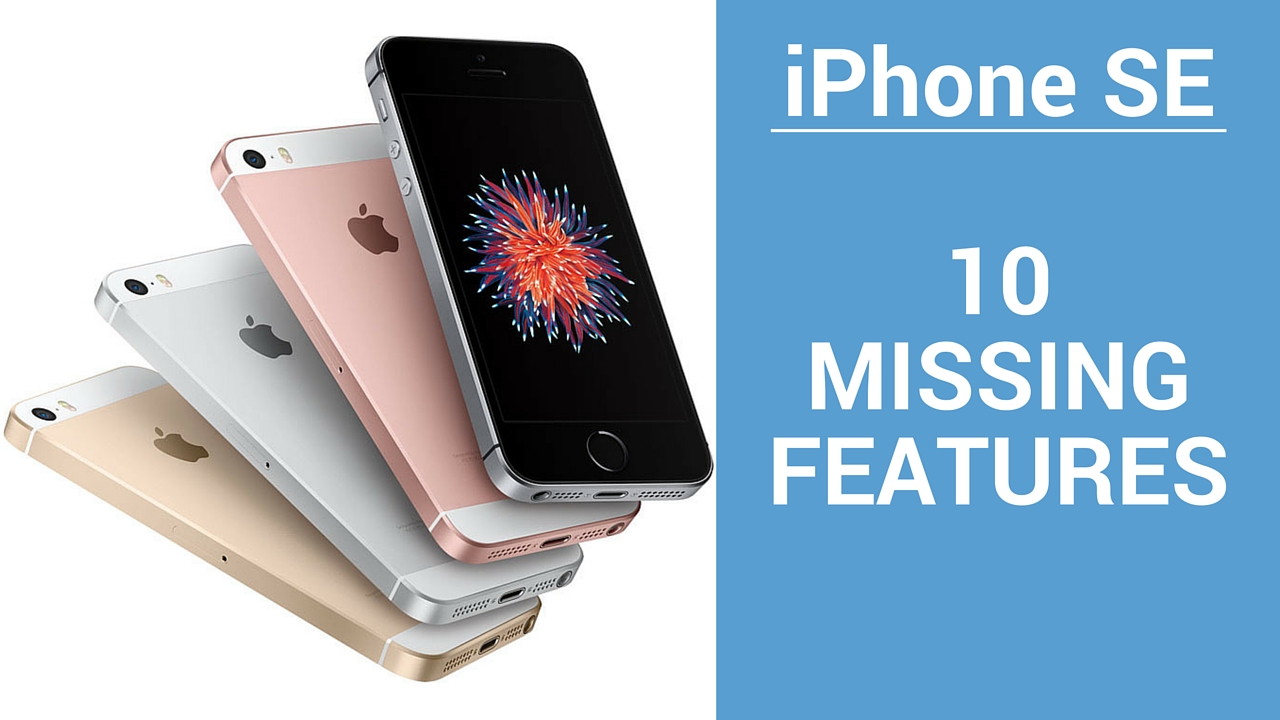 The iPhone SE has the body of an iPhone 5s, but with all of Apple’s latest tech. Well, most of it anyway. In this post and video, we’ve compiled a list of the latest features that didn’t make the cut to Apple’s four inch handset.

The iPhone SE has an Aluminum body like all of Apple’s phones, but it doesn’t include the harder 7000 series Aluminum that debuted with the introduction of the Apple Watch. That means the phone may not hold up quite as well to drops, dings, and scratches than the 6s.

Apple never publicly acknowledges the water resistance of their phones, but thanks to teardowns from sites like iFixit, we know that the iPhone 6s was the most water resistance iPhone to date. The inclusion of adhesive around the display, silicon seals on circuitry, as well as other preventative measures help keep liquid out. It isn’t enough to take your phone swimming, but should help the occasional splash. It looks like these helpful additions didn’t make it to the SE.

iPhone 5s and the iPhone SE both only have 800:1 contrast ratios which is much below the 1400:1 and 1300:1 on Apple’s larger phones. If you are coming from an iPhone 5s or earlier, you probably won’t notice the difference. The SE also doesn’t include Dual-Domain pixels which improve viewing angles.

Touch ID is a great feature. It has new capabilities on the SE compared to the 5s with the inclusion of Apple Pay. Unfortunately, it is still a first-generation sensor. Speed and accuracy are a bit behind the 2nd-generation model that came out with the iPhone 6s.

3D Touch is still a luxury only afforded to those on an iPhone 6s/6s Plus. While it may have been a cost saving measure to keep the price low, it also could be a logistical challenge on how to display the popup menus of 3D Touch on such a diminutive screen.

The rear camera got a huge update from the 5s. It now can shoot up to 12MP, Live Photos, 4k video, and 240p slow motion. The one thing that it didn’t get isn’t much of a surprise, and that is optical image stabilization. This is only available in Apple’s “Plus” sized handsets so not even the 6s has this feature, but still worth mentioning.

Even though the rear camera got quite the upgrade, the front camera wasn’t so lucky. The forward-facing shooter only is 1.2 megapixels. That means your selfies, especially those at night, will be a bit more on the grainy side. The good news is, it still contains the Retina Flash which uses the screen to add additional brightness to your dimly lit photos.

Apple is known for undercutting memory on their devices, and often charging quite the premium to get extra storage. While the SE is their cheapest phone and coming in light on memory is no surprise, the maximum available is only 64GB, whereas the iPhone 6s can max out at 128gb. If you are looking for more than 64GB, you will have to look at Apple’s larger screened phones.

Introduced in the iPhone 6, the barometer is a way to more accurately tell your altitude, to glean information like the flights of stairs you’ve ascended or descended. It was also used in other interesting ways. Dark Sky (and other weather apps) for instance use the barometer of users phones to collect data in order to more accurately predict rainfall. Without the barometer, it looks like the iPhone SE owners won’t get to join in on the stair climbing fun.

The Taptic Engine replaced the vibration motor on the 6s, mostly to give some form of feedback for 3D Touch. The Taptic Engine can get up to full speed in one cycle which means it can give more precise, shorter vibrations. In short, it is able to offer different degrees of vibration and can more subtle than the heavy handed motor in previous phones. Especially with the lack of 3D Touch, it isn’t surprising the SE didn’t get the more modern motor.

These 10 features may be missing from the SE, but for those looking for a phone with a smaller screen, the SE is close to ideal. If you were looking forward to a smaller phone, are any of these deal breaks for you? Did any of these ommissions surprise you?