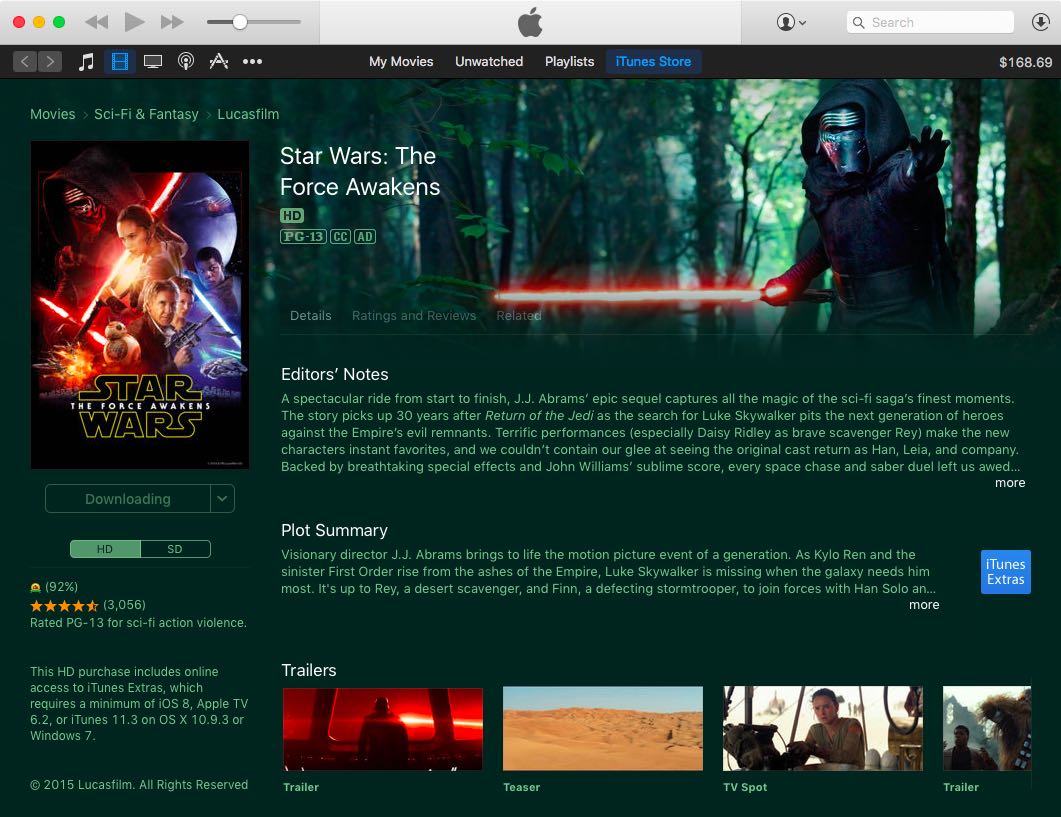 Apple has been accepting pre-orders for J.J. Abrams’ Star Wars: The Force Awakens on the iTunes Store for a few weeks now.

Today, April 1 (not a joke), the movie released on the iTunes Store. The $19.99 high-definition download includes iTunes Extras like deleted scenes and interviews with the cast and filmmakers.

The movie is not yet available for renting. The SD version will follow on April 5 for $14.99, when Star Wars: The Force Awakens is scheduled to launch at physical retailers.

“The story picks up 30 years after Return of the Jedi as the search for Luke Skywalker pits the next generation of heroes against the Empire’s evil remnants. Terrific performances (especially Daisy Ridley as brave scavenger Rey) make the new characters instant favorites, and we couldn’t contain our glee at seeing the original cast return as Han, Leia and company. Backed by breathtaking special effects and John Williams’ sublime score, every space case and saber duel left us awed and overjoyed.”

If you pre-ordered it, and enabled the Automatic Downloads option for Movies, you’ll see a message in iTunes saying the movie is ready to be watched as soon as a large enough portion of the 5.98-gigabyte HD movie has downloaded.

iTunes Extras include the complete story behind the film’s making in a feature-length documentary, titled “Secrets of the Force Awakens: A Cinematic Journey”, that includes in-depth footage and exclusive interviews with the actors and filmmakers.

RELATED: Star Wars: The Force Awakens wallpapers for your iPhone

In another documentary, “The Story Awakens: The Table Read,” cast members reflect on the memorable day they all came together for the first time to read the movie’s script.

Other iTunes Extras include a host of deleted scenes along with such featurettes as Crafting Creatures, Building BB-8 and Blueprint of a Battle: The Snow Fight.

You can download Star Wars: The Force Awakens on iTunes for $19.99.

The soundtrack is available on Apple Music and there’s a Star Wars radio station, too.

iTunes is also selling a bundle of the six previous Star Wars movies for $99.99.