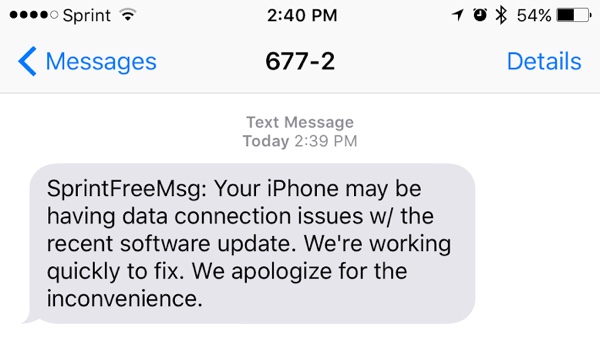 Sprint customers took to Reddit to complain about the inability to connect to Sprint’s LTE cellular data network after upgrading to Apple’s iOS 9.3 software update last week. The most recent iOS 9.3.1 update does not appear to have fixed the issue.

Sprint has acknowledged the issue in a text message to affected users and promised a fix, which will likely be delivered in the form of an over-the-air carrier settings update. “Your iPhone may be having data connection issues with the recent software update,” reads Sprint’s message. “We’re working quickly to fix. We apologize for the inconvenience”.

Affected users describe only being able to connect to Sprint’s 3G data network.

Restarting the device, restoring it to factory settings or reinstalling iOS from scratch does not help it re-connect to Sprint’s 4G LTE cellular data network. These connectivity issues force customers to use Sprint’s slower 3G network, which also causes the iPhone to draw more power.

“I’m having data issues as well on my 6s Plus in the LA/OC market. Over the past three days I’ve been troubleshooting on my 80 mile round trip commute via Field Test and Speedtest,” wrote one user in California.

“I’ve figured out that data transfer is broken when connected to Clear B41. No problems on Sprint B41, B25 or EVDO. I’ve created a ticket with Sprint Care, and supposedly they have notified their network team. I’m awaiting a response”.

The issue is especially problematic for people who are completely unaware of it and have 4G enabled in cellular settings: these folks are unable to receive iMessages and use other apps that require network connectivity unless they’re on Wi-Fi, without even realizing it.

Some Reddit users suggest manually adjusting the device’s LTE band in Filed Test Mode will fix the connectivity problem, at least until Sprint delivers a permanent fix on the network level.